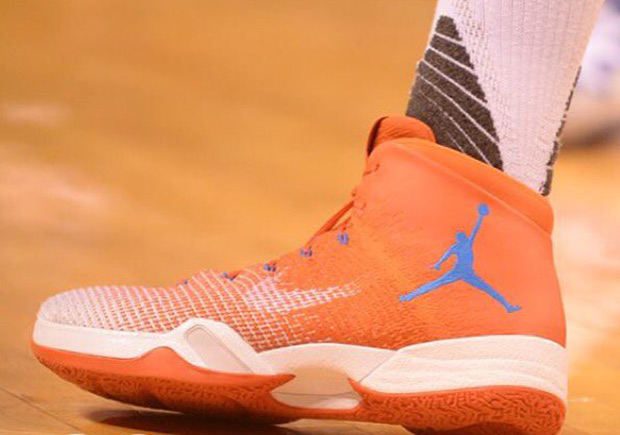 It’s only the pre-season and Jordan Brand is already breaking out rare samples of their latest and greatest Air Jordan 31. Russell Westbrook will be a major storyline throughout this NBA season with the explosive point guard taking over the reins of the Oklahoma City Thunder after Kevin Durant bolted for Golden State. While Russ will most likely be a triple double machine and a top MVP candidate throughout the regular season, he’s making noise in games that don’t even count by debuting what could be an Air Jordan 30 and Air Jordan 31 hybrid. For now, we’ll just call this pair the Air Jordan 30.5 hybrid model.\

The Air Jordan 30.5 utilizes the Flyweave upper of the Air Jordan 31, one that was inspired heavily by Mike’s first signature silhouette complete with both Jumpman and Nike Swoosh branding on the woven panels. The vibrant orange to white gradient gets even more interesting by the midsole and outsole unit, as the FlightPlate (or FlightSpeed as it was called on the Air Jordan 30) returns with its patented Zoom cushioning system. What do you think of this rare Air Jordan 30.5 PE? Check out more photos below and expect more to come from this unique hybrid in the coming weeks.