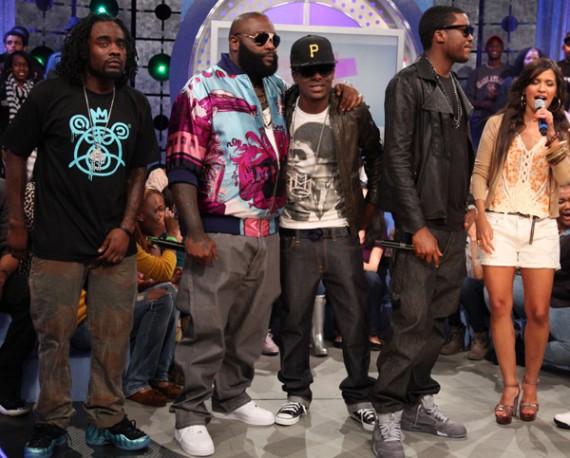 Rick Ross and his newly formed Maybach Music Group, which consists of Wale, Meek Mill, and Pill, visited the set of BET’s 106 & Park once again last night (this was the first visit) to promote their new album, Self Made Vol. 1, which is in stores now. Rick Ross and Wale have been known to rock heat from time to time and on this occasion, even Meek Mill stepped up his Jordan game with a pair of crispy “Wolf Grey” Air Jordan V Retros, while Wale debuted the new “Retro” Foamposite Pros that are set to drop in the coming months. Ross kept it “South Beach” with his floral shirt and fresh out of the box White on White Air Force 1’s. Pill wore the understated yet classic Black and White Converse Chuck Taylor All-Stars. Who do you think had the best kicks on out of the group? Let us know after the jump.