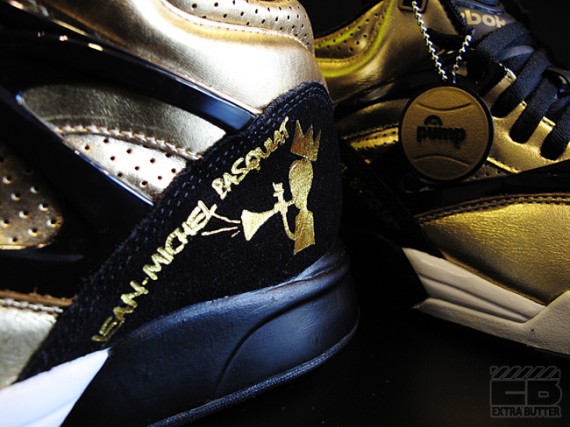 The New York Times must’ve forgotten that young artsy types still pass copies of Downtown 81 among friends, but they were at least on the right track in noting that it was “Not until the rapper-producer Swizz Beatz’s public embrace of [Jean-Michel] Basquiat did his presence begin to grow.”  Surely Madonna meant more to The Radiant Child’s career than the new curator of his Reebok Affili’art capsule, but there’s no doubting that Swizzy is schooling a whole new generation on Neo-expressionism via attention-grabbing kicks like the new Reebok Pump Omni Lites pictured above.  This one goes further than any before it in pronouncing the artist’s name; could we one day see a similar theme on the Kamikaze or Swizz’ upcoming Time to Hold Court?  Check them out in greater detail after the jump then grab your Basquiat Reeboks from Extra Butter.