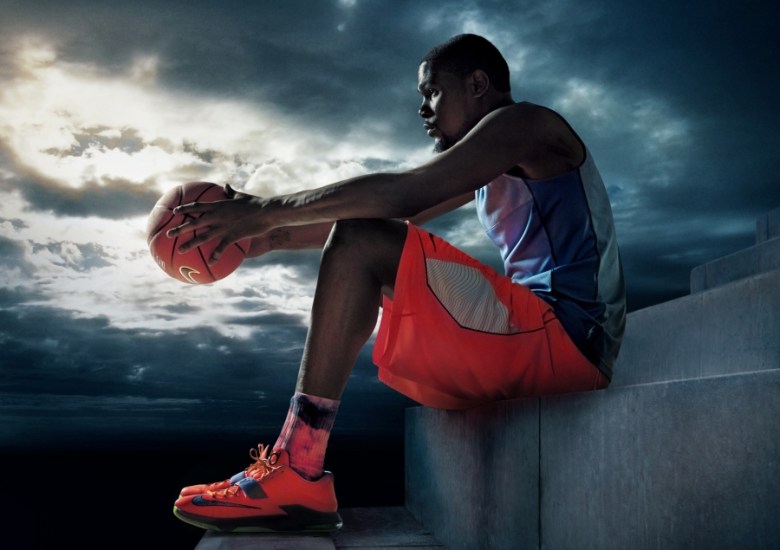 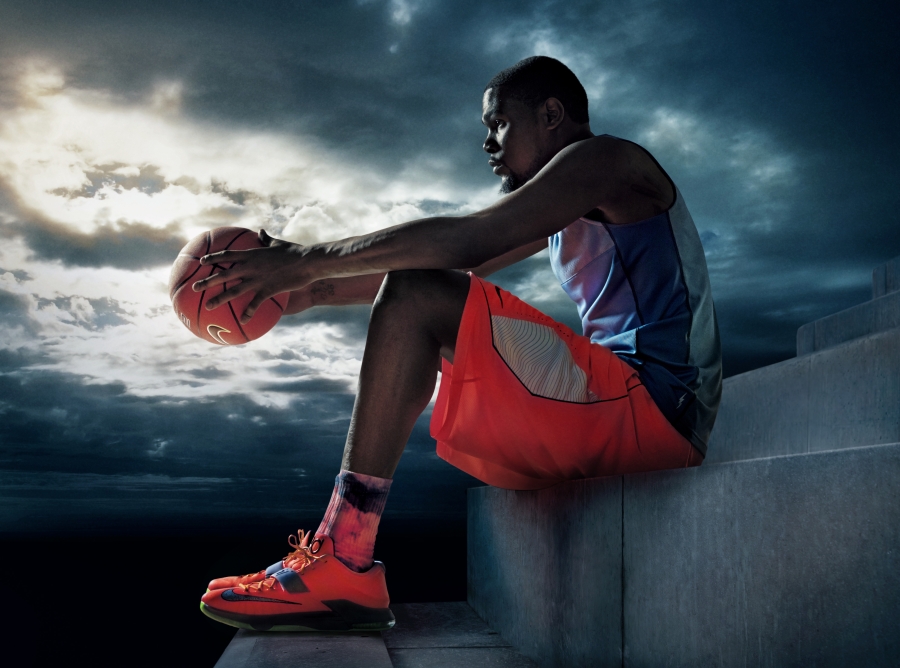 The Nike KD 7 is officially here. The reigning MVP is debuting his latest signature model out in Washington DC today, so you can expect all sorts of updates on his latest right here at Sneaker News. Design inspiration comes from the natural phenonenom of lightning striking, which results in the blazing bright Nike KD 7 “35k Degrees” that’s on display in this first set of official images. Continue reading for a detailed breakdown of the tech included in the new Nike KD 7 and watch for the Nike KD 7 “USA” to launch on July 4th and the Nike KD 7 “35k Degrees” to launch on July 12th. Also, check back in on Sneaker News throughout the day for updates from the media-only launch event.

Legend has it that lightning never strikes the same place twice. Fact is, neither does Kevin Durant; he strikes from everywhere on the court.

Nike has designed Durant’s seventh signature shoe to the specifications of the reigning Most Valuable Player and one of basketball’s most dynamic stars. The KD7 combines leading performance innovation with a colorful narrative pulled from Durant’s fascination with meteorology that began as a child and continues today.
DURANT’S DIRECTION

Durant teamed with Nike designer Leo Chang to create the KD7, a process that began 18 months ago. The challenge was trumping the KD6, Durant’s favorite shoe to-date and the model he wore in his MVP season while averaging 32 points per game and winning a fourth scoring title.

“It’s been a great journey with Nike and I’m confident giving Leo specific feedback on what I’m looking for in a shoe,” said Durant. “For the KD7, I really wanted a shoe that allowed me to move quickly, while having great support and stability. I also wanted to bring back the strap.”

Chang’s performance objective for the KD7 was to provide Durant with the quickness and forefoot flexibility typically reserved for a point guard, combined with the stability and support in a shoe designed for a power forward.

Chang accomplished this “best of both worlds” design challenge by using seamless forefoot mesh, dynamic Nike Flywire technology and encapsulated Nike Zoom in the front of the shoe. Bridging the transition between the forefoot and heel is a midfoot strap. Chang combined Hyperposite support in the heel with a newly developed visible Nike Zoom Air bag for responsive cushioning.

The Hyperposite technology, making its debut in KD’s signature line, provides the reigning MVP with support for his evolved post moves and rebounding. The distinct Hyperposite look, an evolution to the original Foamposite, is also a nod to KD’s Maryland roots. His hometown region, affectionately known as the DMV – DC-Maryland-Virginia – has an ongoing love affair with Foamposite, which debuted two decades ago with the launch of the Nike Air Foamposite One in 1997.
DESIGN INSPIRATION: LIGHTNING STRIKES

KD’s childhood interest in pursuing a career as a meteorologist first inspired the KD4 Weatherman colorway in 2011. The theme was incorporated into his fifth and sixth signature shoes and continues to take shape with the KD7.

The KD7 colorway narrative begins with lightning, and more specifically the average temperature of a lightning strike – 35,000 degrees Fahrenheit. It also builds on KD’s insight of wanting to be lightning-quick.

The KD7 35,000 Degrees colorway features a bright mango upper, volt outsole and hits of deep grey to represent the electric nature of lightning strikes. Stratospheric graphics and nods to lightning also appear on the sole and Swoosh.

Personal cues are featured on each of the KD7 colorways: a silhouette of his homestate of Maryland is embedded on the outsole; and the forefoot strap includes the names of his mother Wanda, his grandmother Barbara, his father Wayne and his brother Tony.

Each of the five KD7 colorways this season will continue the weather-centric theme. The storylines were previewed at the KD7 global launch webcast today, with additional details coming tomorrow.
YOUNG ATHLETES

The KD7 will also be available for young athletes, from infants and toddlers to pre-school and grade school. Each version is designed specifically to the foot’s development at certain ages with sole flexibility as a priority. An exclusive colorway for young athletes, the KD7 Carnival, will launch in August with details to come this Friday. 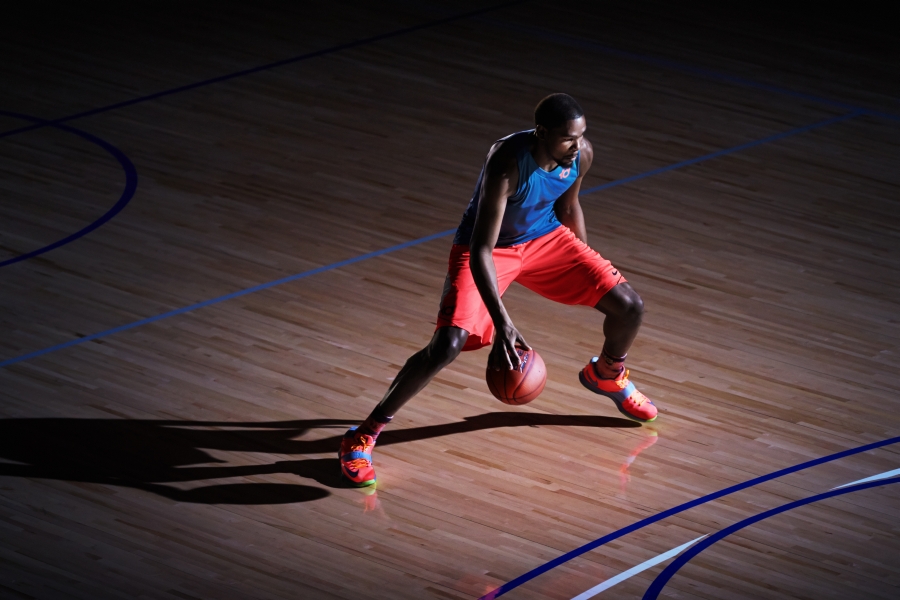 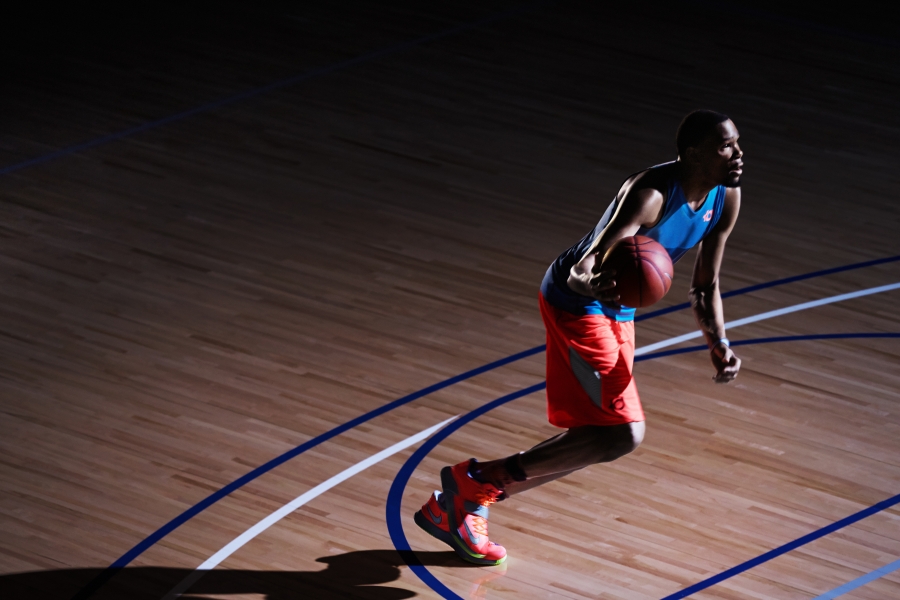 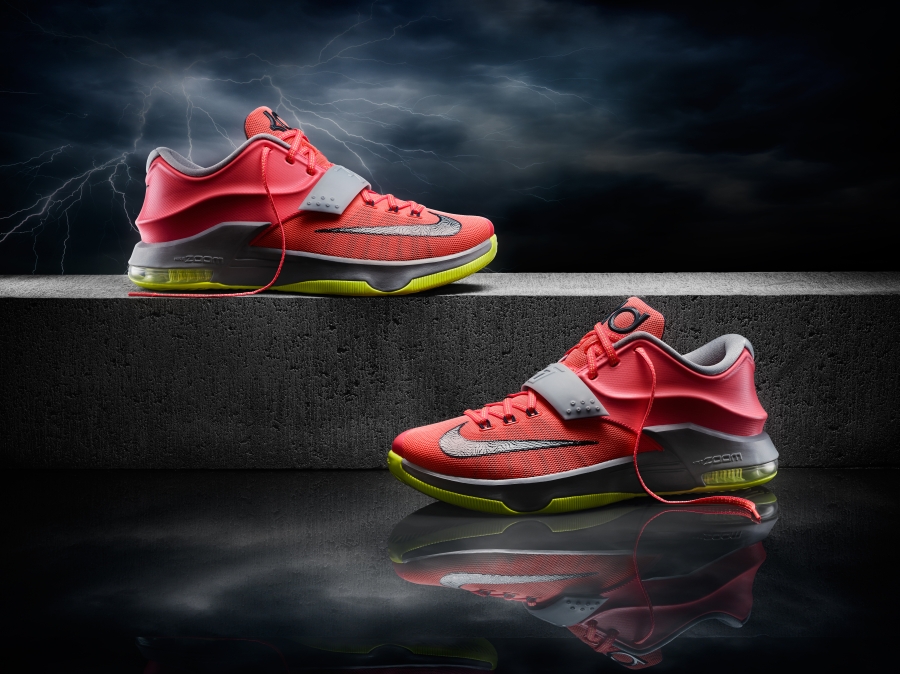 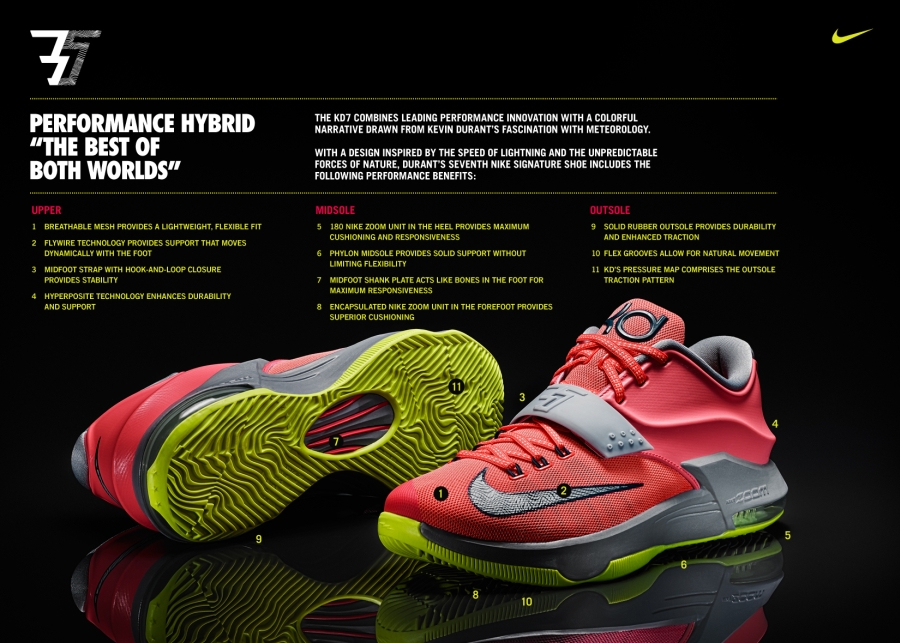 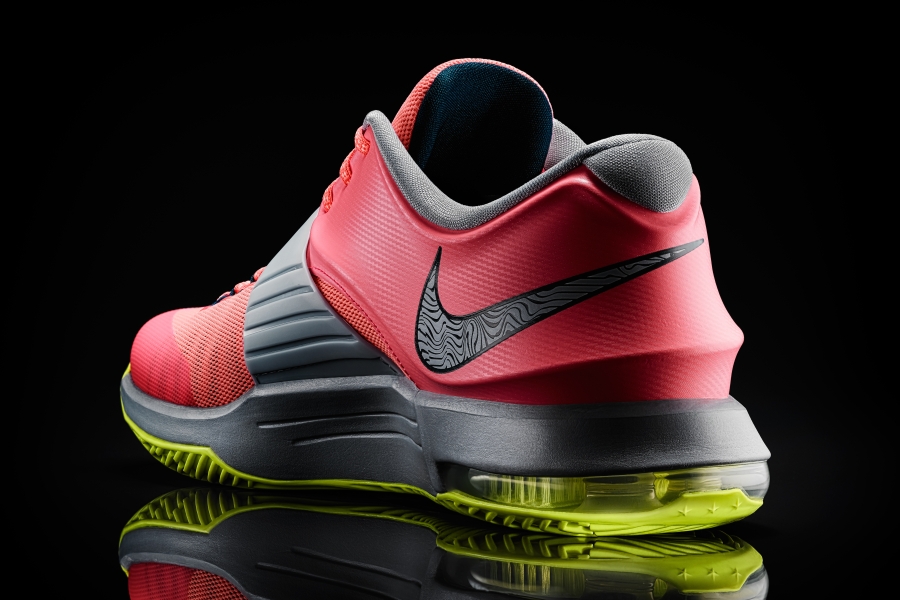 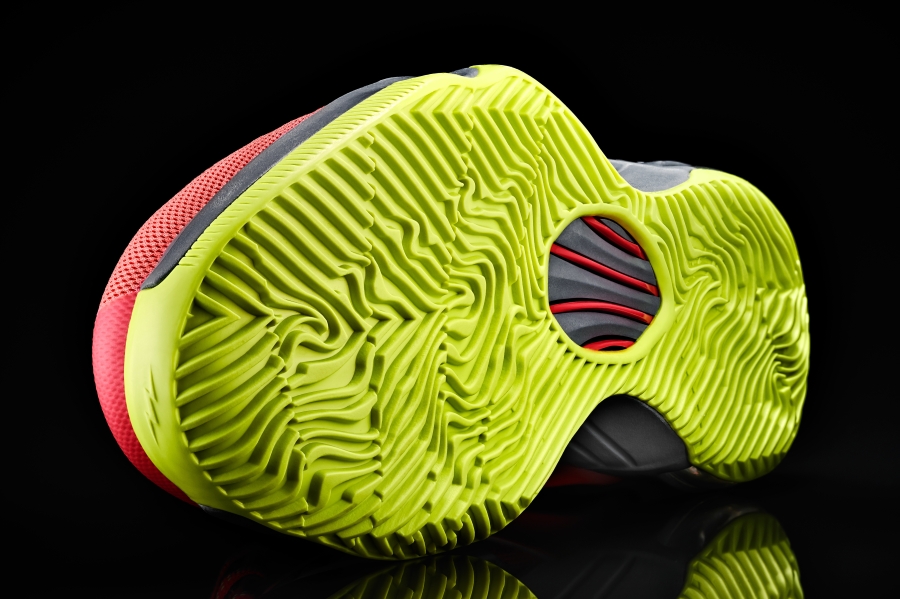 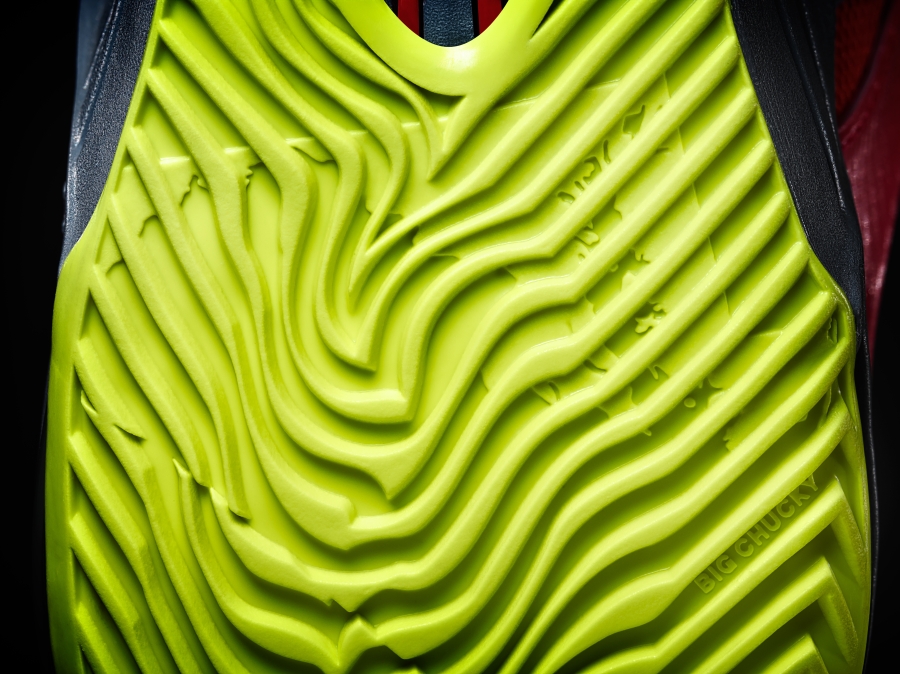 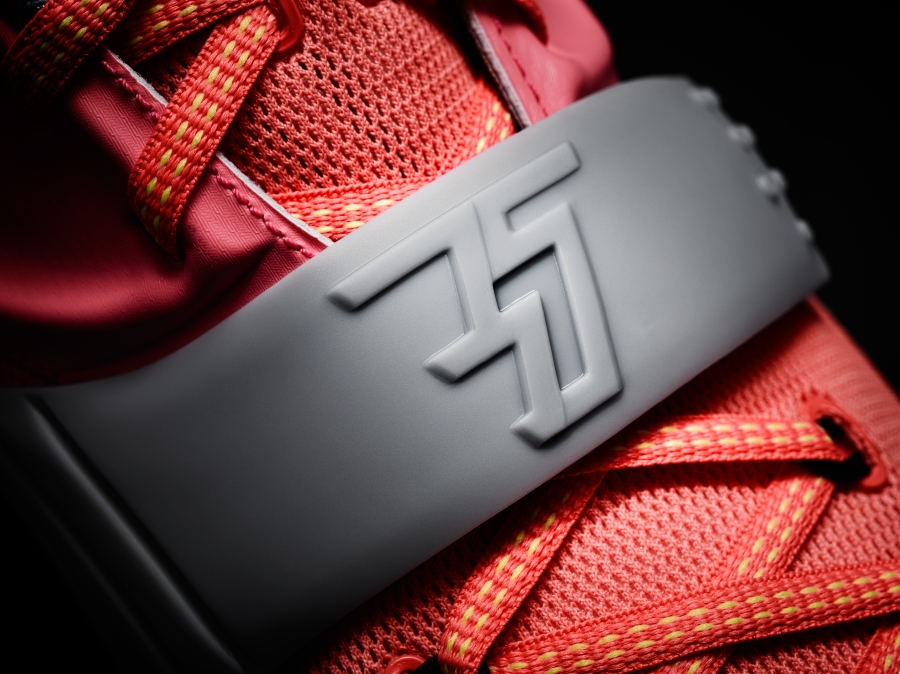 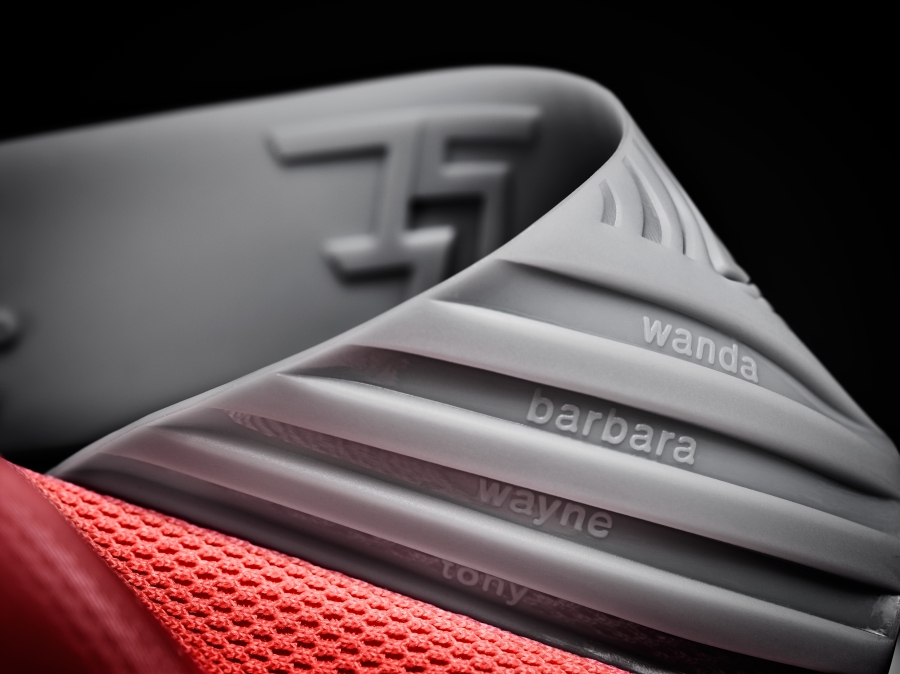 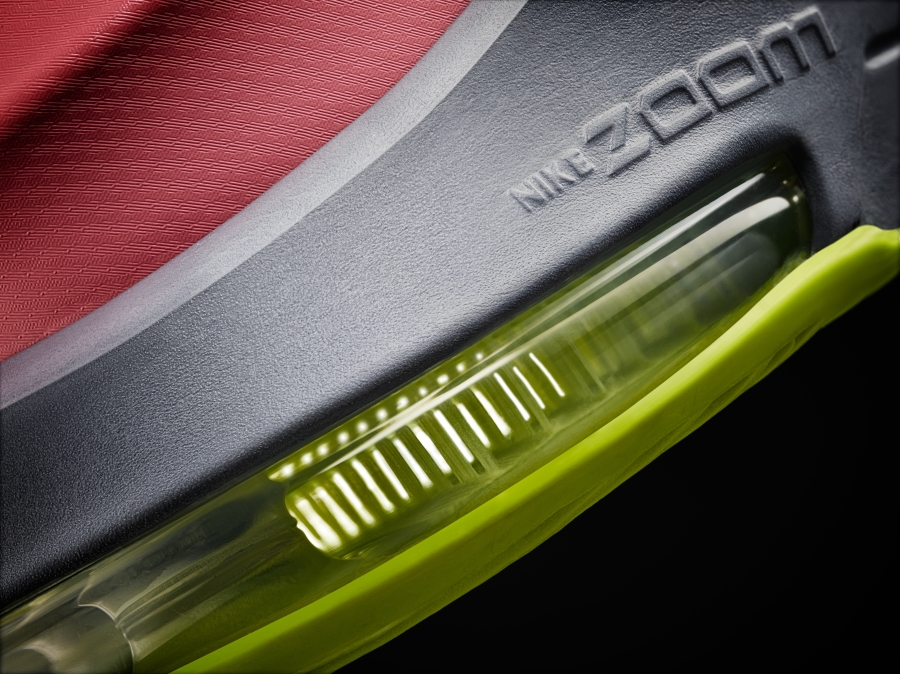 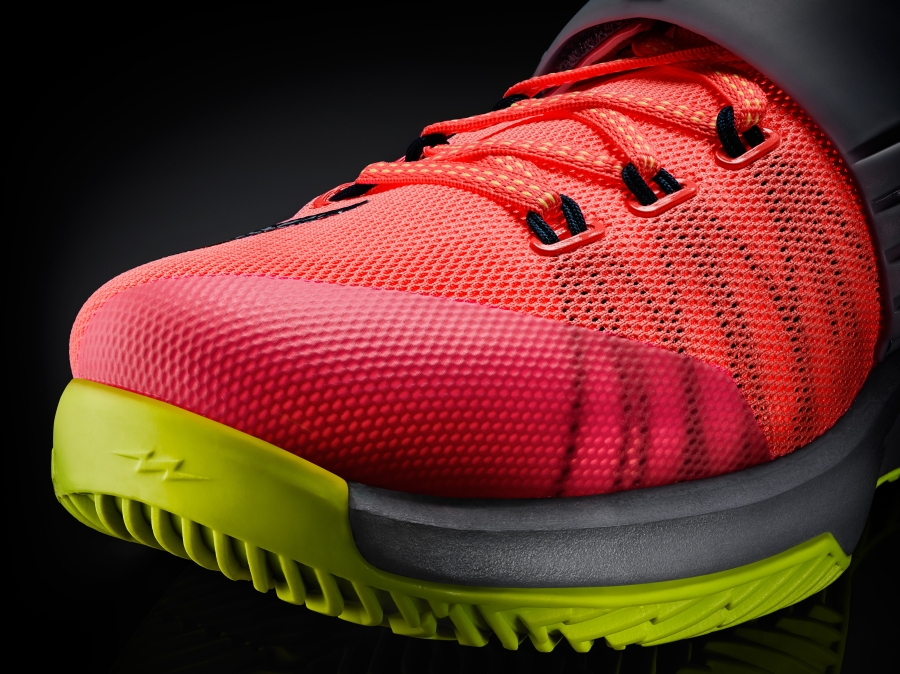 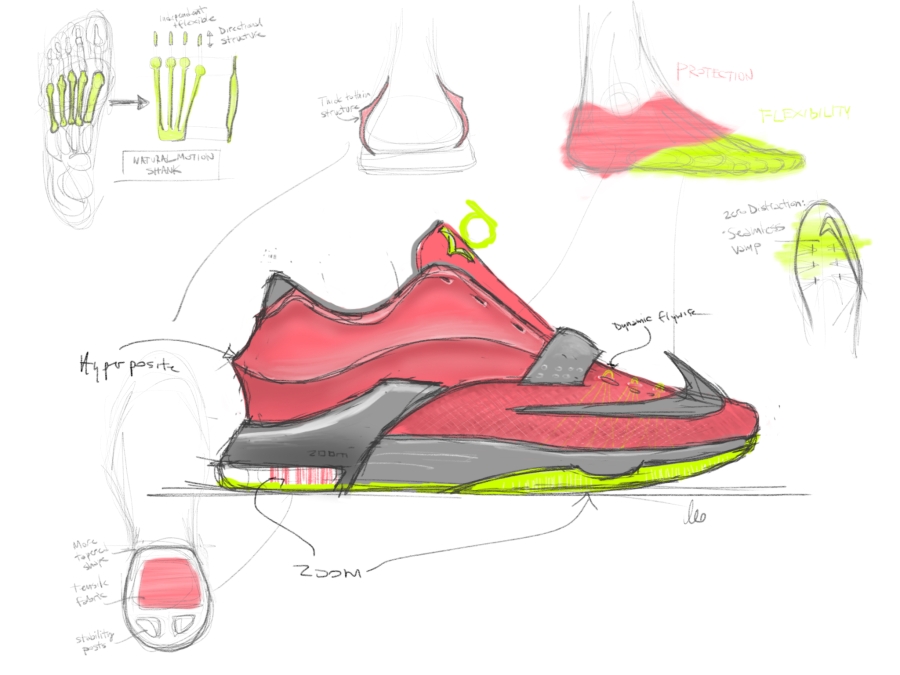