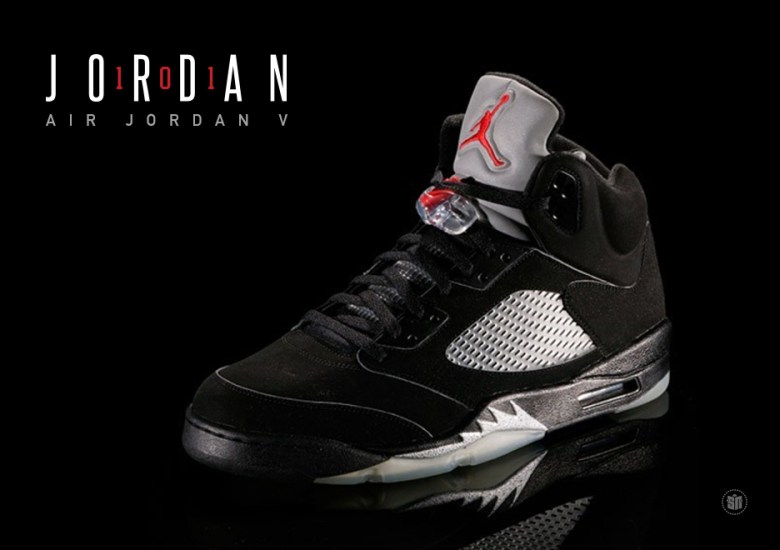 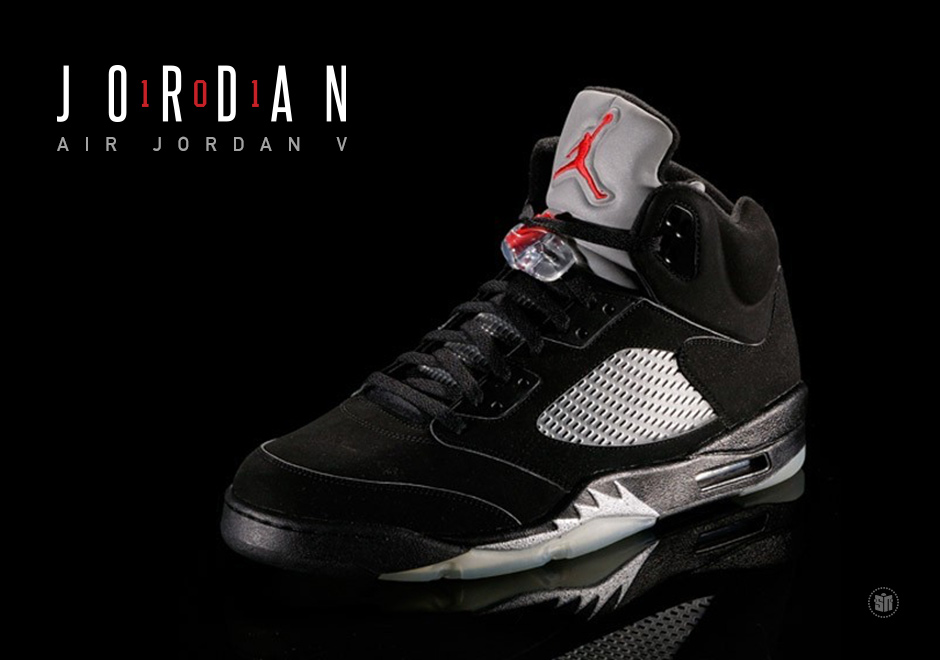 By the time the Air Jordan line got to its fifth model in 1990, Michael Jordan’s signature series was already an established powerhouse in the athletic sneaker world. The luxury basketball shoes were what every kid was begging his parents for, and were made all the more envied over due to the fact few actually got them because of the $100+ price tag. While some signature sneaker lines are old news or not even existent by the fifth model, the Air Jordan line was as coveted as ever, showing no signs of slowing its momentum with the Air Jordan V.

The Air Jordan III and IV were hard acts to follow, but thanks to Tinker Hatfield’s addition of some new design elements and an aggressive, fighter plane inspired look, the Air Jordan V kept us all thirsting for more by continuing the strong evolution of Jordans. For all the essential information on what made the Air Jordan V one of Tinker’s greatest hits and a vital member of Air Jordan history, continue reading this latest edition of Jordan 101. 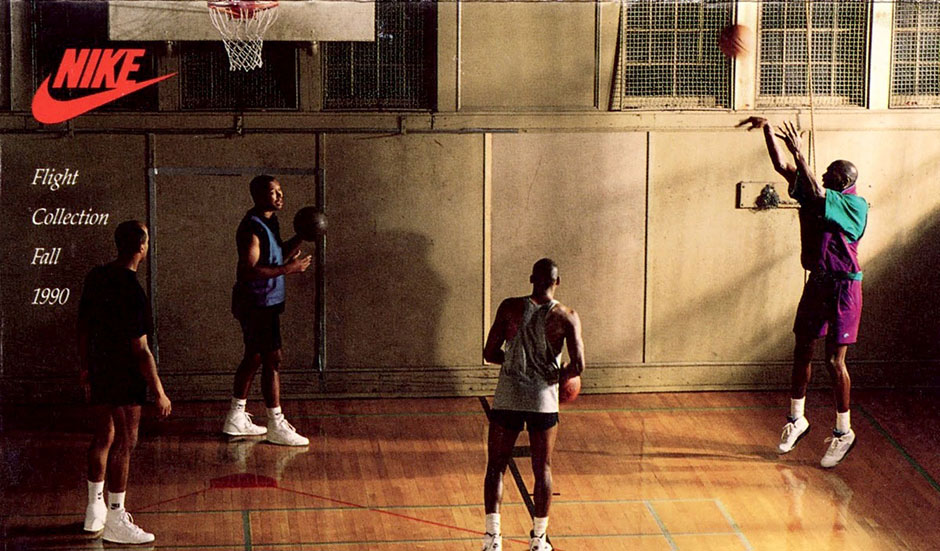 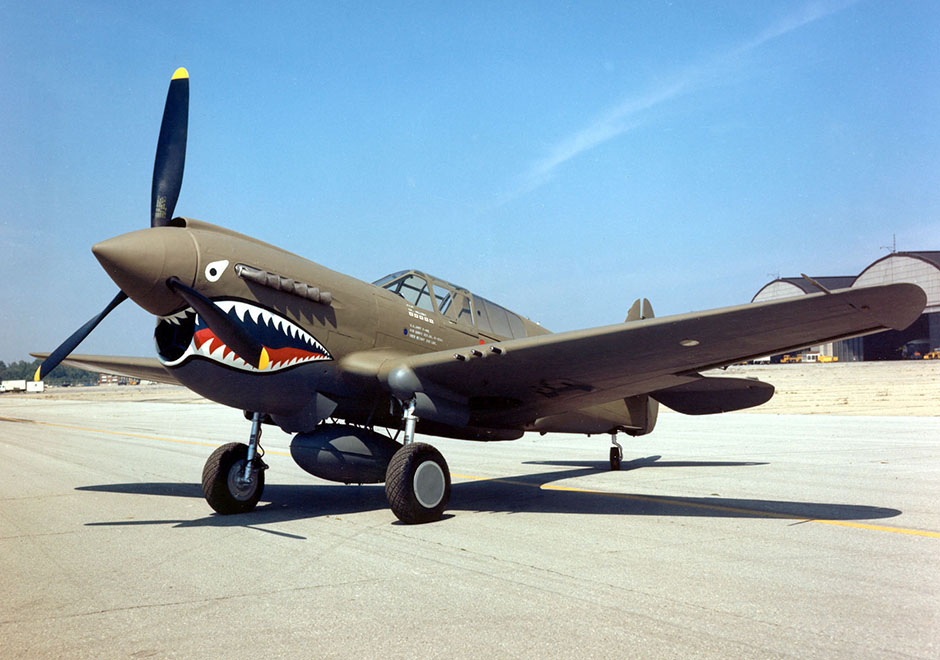 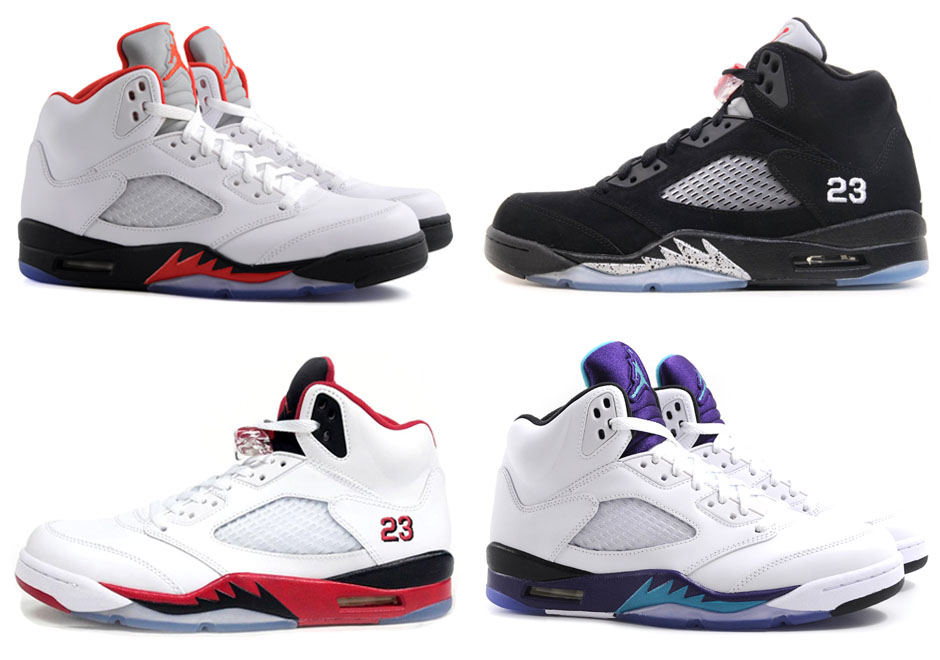 Four Original Colorways
Unlike every signature sneaker that releases today in an almost untrackable number of colorways, the Air Jordan V released in only four. Included in the OG colorways were the two similar white looks in White/Black/Fire Red (with 3M tongue) and the reversed White/Fire Red/Black, Black/Metallic Silver, and the beloved “Grape”. 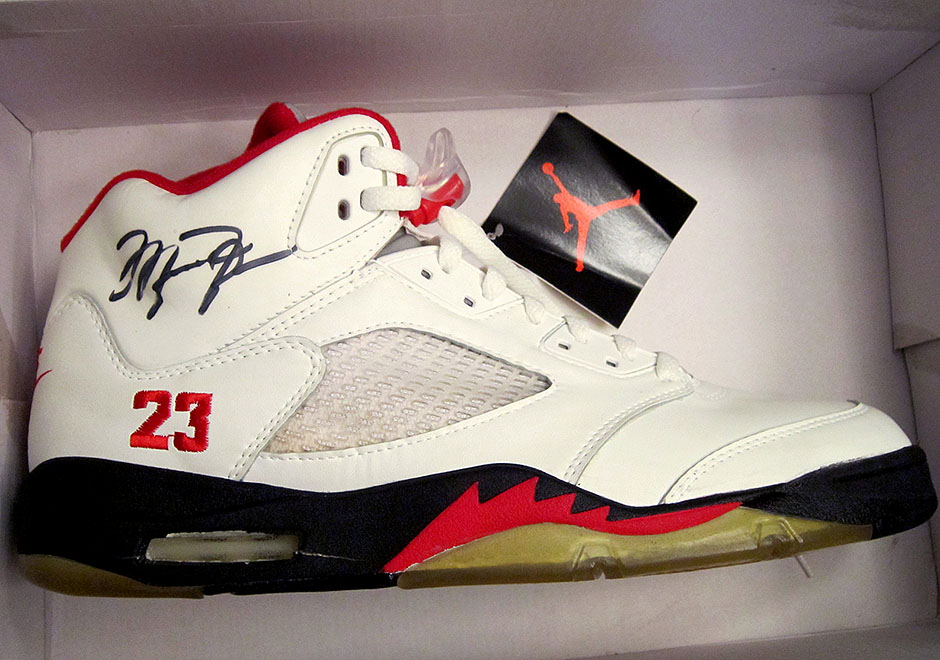 No 23 For You
Now almost every Air Jordan 5 Retro comes with the #23 embroidered at the heel, but originally, only one of the four original colorways—Fire Red—released with MJ’s number on the heel. Only Michael himself got 23 on the Black/Metallic and White/Black/Fire Red colorways. It wasn’t until 2000 when the “Laney” and “White/Metallic” colorways dropped that most versions of the shoe came with the 23 embroidery. 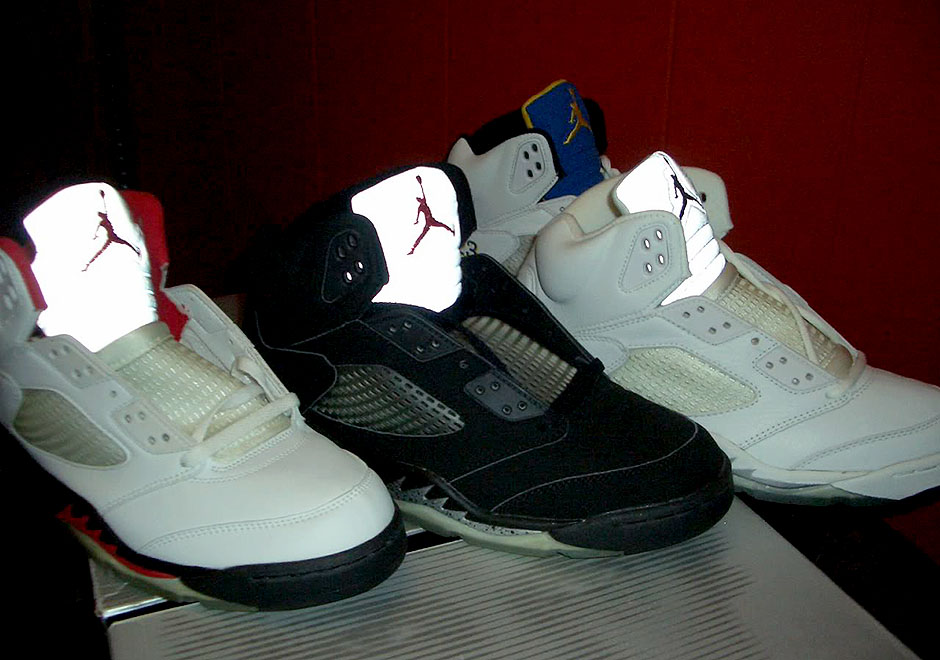 The Flashiest Air Jordan Yet—Literally
Utilized on running shoes for years to increase visibility during night runs, it wasn’t until Tinker put reflective 3M material on the tongue of the Air Jordan V that it was seen on the hardwood. Tinker’s intention was to bring attention to the shoe as flashbulbs popped—which happened almost anytime MJ made a move—and lit up the tongue. Only two of the original four colorways of the V had the reflective tongue, but it would go on to become one of the most iconic features of the model, appearing on most Retro+ colorways and even inspiring the all-3M “Green Bean” colorway from 2006 and the black reflective colorway from the “Raging Bull” pack. 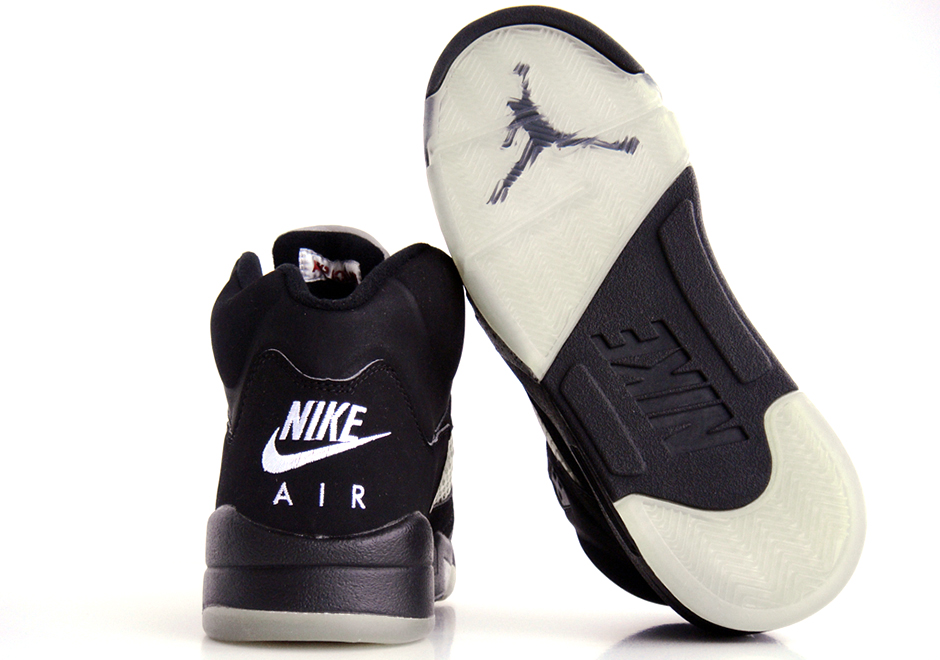 See-Through Soles
The Air Jordan V also introduced clear rubber to the sneaker game. Clear outsoles are now a common design element, but imagine how crazy it was to see that Jumpman below the sole for the first time back in 1990. 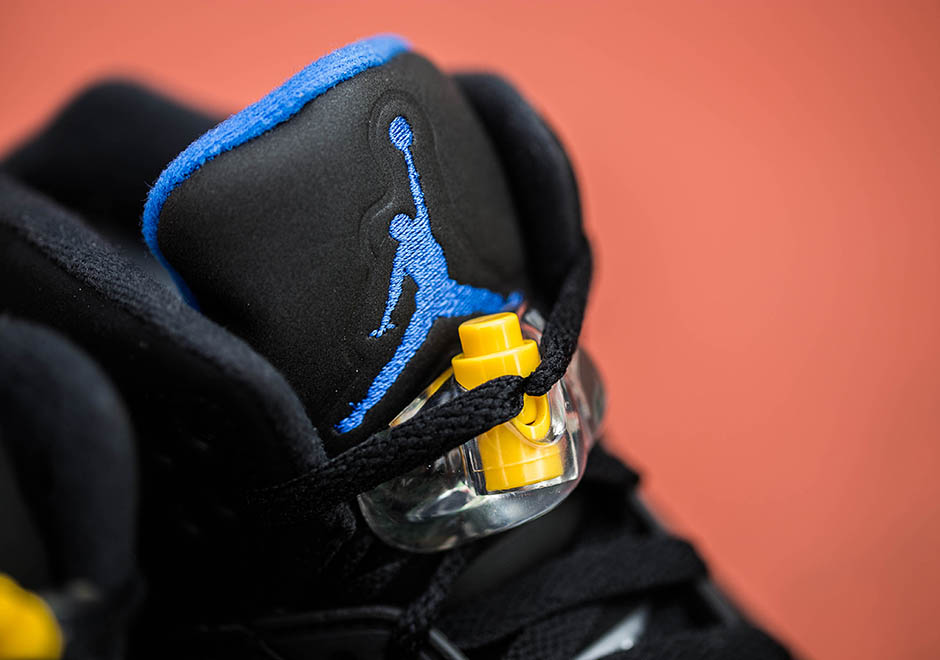 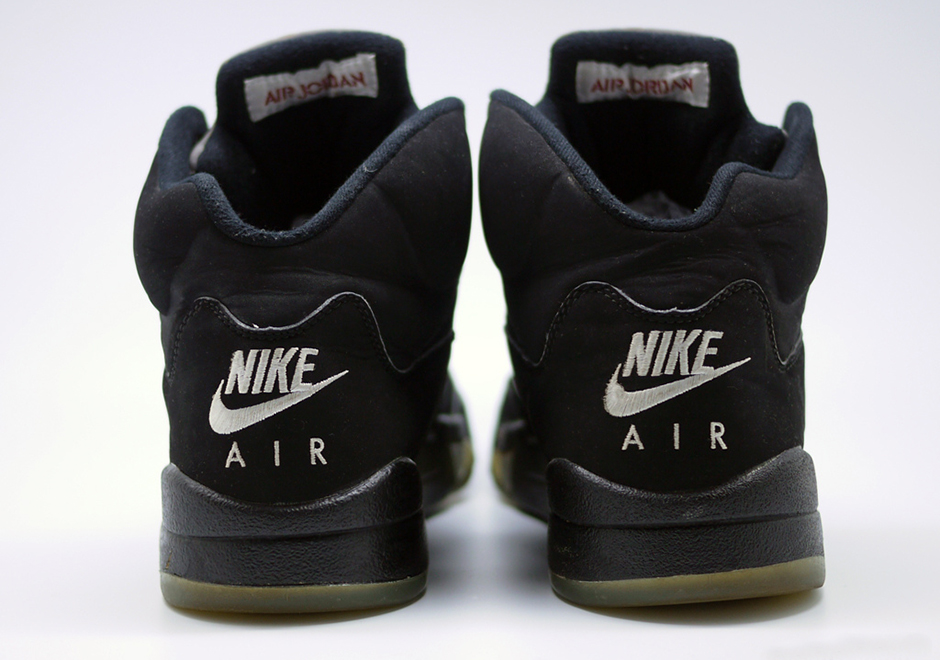 Asymmetrical Collar
Another notable feature of the Air Jordan V is the asymmetrical collar, which was designed to sculpt to the ankle more ergonomically while also offering support.

MJ’s Achievements in the V
The Air Jordan VI gets the honor of being the first Air Jordan Michael won a title in, but the V got pretty close, as he made it to the Eastern Conference Finals before his Bulls were defeated by the Detroit Pistons Bad Boys. The V does get bragging rights to being the sneaker on his feet for his career high 69 points, which took place on March 28, 1990 in an overtime victory against the Cleveland Cavaliers. MJ also took home his fourth NBA scoring title during the 1989-90 season. 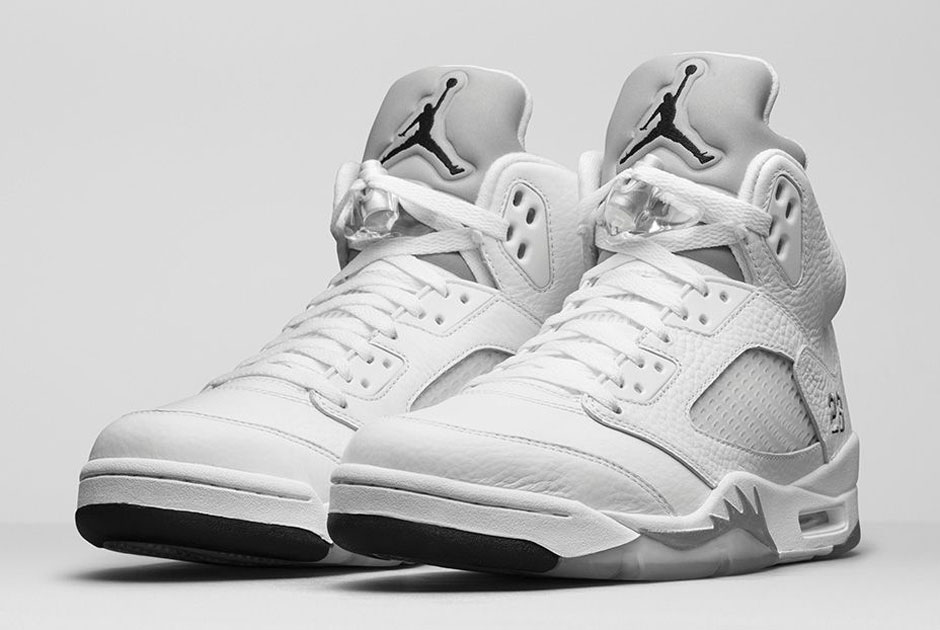 Remastered
The Air Jordan 5 Retro is one of the first models to be chosen for the “Remastered” series, dropping this weekend in the White/Metallic Silver colorway first seen in 2000 and now back for a whole new set of fans in 2015. While the upgraded materials are a welcome development, we’ll have to keep waiting to see if the V ever returns again with the original Nike Air logo on the heel.