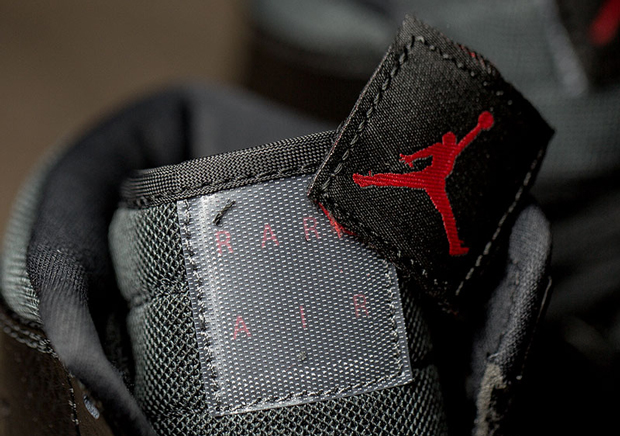 What would an Air Jordan 1 be without the classic Wings logos? A rarity to say the least, but it would also be one that referenced past original samples of Mike’s first signature with Nike. There wouldn’t be a better time for Jordan Brand to nod at its origins than during this year’s 30th Anniversary celebration, and with that we’re getting the alternate Air Jordan 1 “Rare Air” in the near future. Now available in Europe, the shoe ditches any traces of Wings logos for an imprinted ‘Air Jordan’ embossing on the upper ankle collar where we’d usually see the iconic pre-Jumpman era logo. The tongue gets a velco addition where you can swap out different Jumpman patches either red or black. Mesh even lands on the ankle collar instead of the usual leather. As for the colorway, an ominous all black upper sees University Red hit the Swoosh branding while a clean white outsole matches the midsole in a revisionist’s depiction of the classic ‘Bred’ look. Stay tuned for more Jordan Release Dates right here on Sneaker News and let us know if you’re a fan of the latest Air Jordan 1 release by taking your thoughts to our comments section.