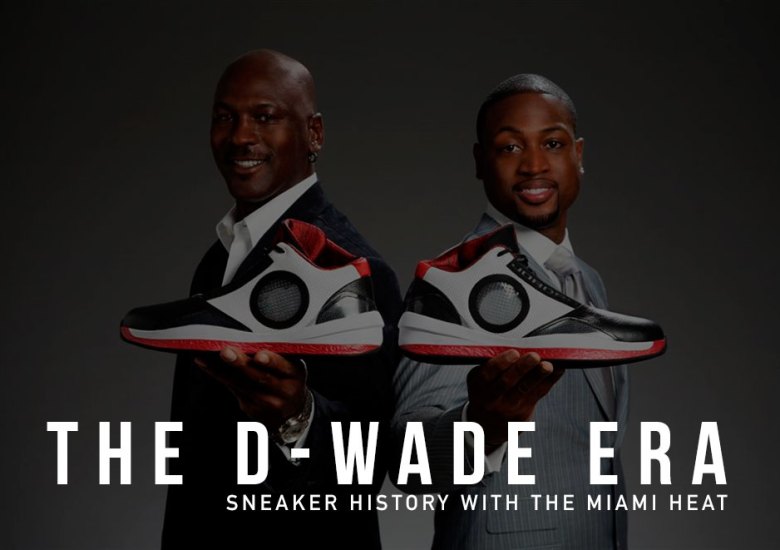 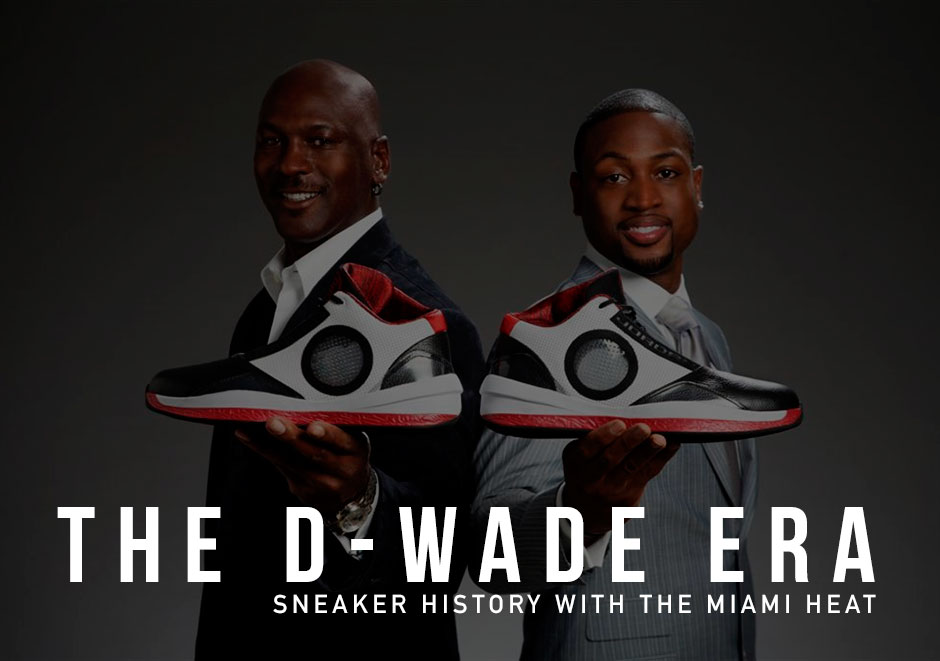 We shouldn’t be surprised when a star player intertwined with the fabric of the city suddenly tears himself away and joins another club. LeBron did it in 2011. Kevin Durant, although not from OKC, moved on to greener pastures in Golden State. But Wade seemed like a Miami lifer until the franchise essentially pushed him out with lowball offers during this whirlwind of an offseason that saw massive dollars thrown around left and right. In a surprising move, the Dwyane Wade era in Miami has come to a close as the three-time champion now joins the Chicago Bulls backcourt. It makes plenty of sense for Wade, who grew up in Chicago idolizing Jordan and the Bulls, but the future remains unknown given Wade’s age and inevitable decline. Thirteen seasons in Miami has produced a lot of memories for Wade, but in sneaker circles, it’s his diverse sneaker portfolio that will be the lasting legacy.

Above: Dwyane Wade at the 2004 Rookie Challenge

Dwyane Wade stepped foot into the NBA as the fifth overall selection in the 2003 NBA Draft. That class of athletes is arguably the best in the history of the NBA, with LeBron James, Carmelo Anthony, and Chris Bosh also entering the league at the same time. While LeBron locked down a massive deal with Nike and Melo got his with Jordan Brand, Wade signed on to be one of the young ambassadors of the Converse basketball brand, and for the first six seasons of his career, Wade rocked the historic brand in a series of models and signature shoes.

Above: Dwyane Wade at the 2006 NBA Finals

Wade quickly emerged as one of the best young Shooting Guards in the NBA, but what steered his career to greatness was Miami’s acquisition of Shaquille O’neal. The dominant center, who was beginning his slow decline, paired perfectly with Wade; in 2006, they reached the NBA Finals, defeating the Dallas Mavericks in six games. Wade was named the Finals MVP while wearing the memorable Converse Wade 1 signature shoe, and in the following years Converse released the Wade 2 and Wade 3. 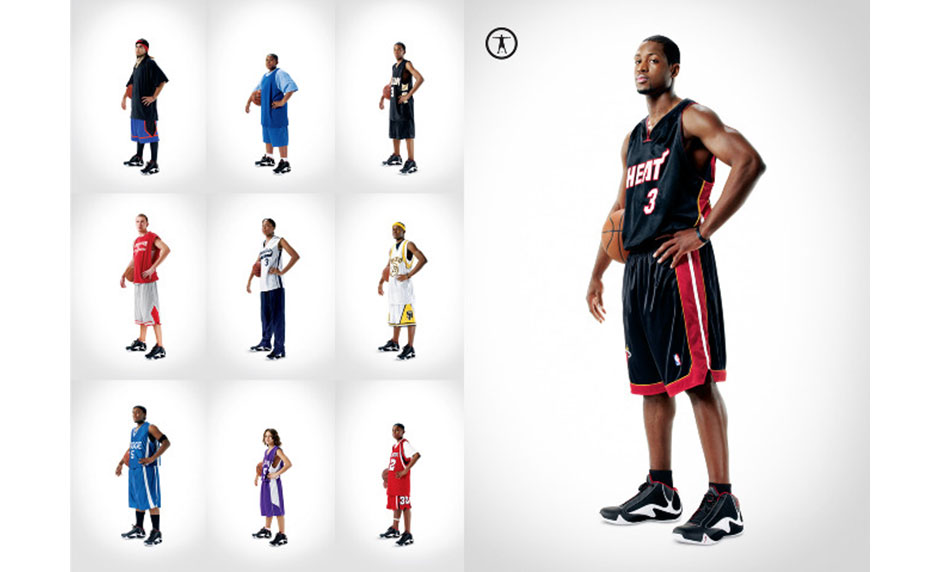 Above: Ad For The Converse Wade 2 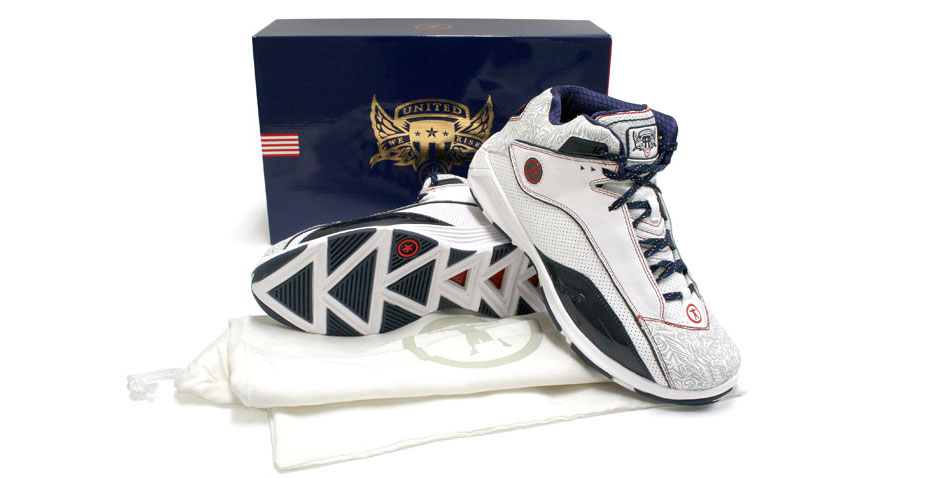 Above: Dwyane Wade’s Converse Shoes For 2008 Olympics in Beijing 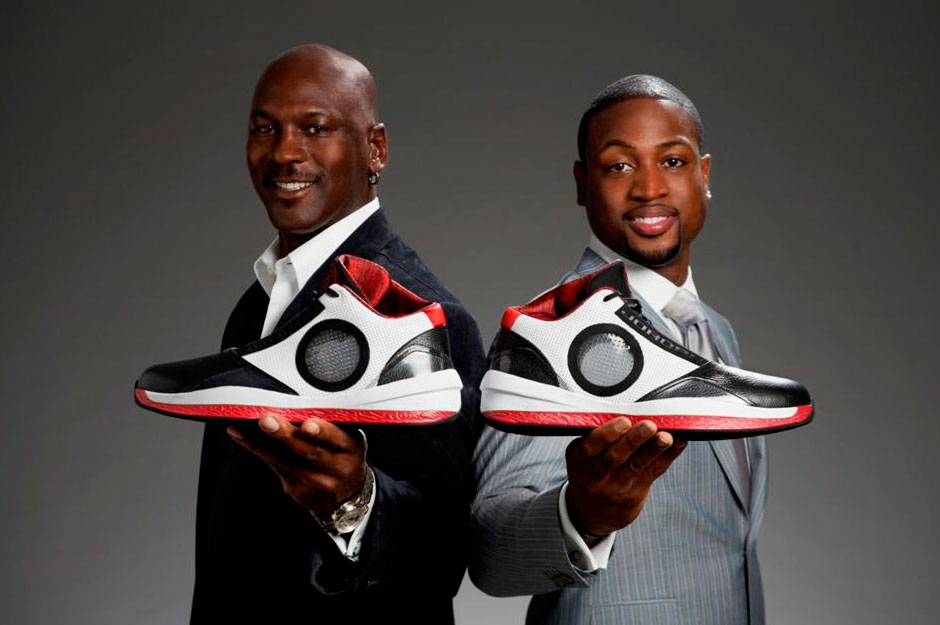 The Heat bounced back mightily in the 2008-09 NBA season and Wade was a legitimate MVP candidate. At the start of the following season, Jordan Brand had announced that Dwyane Wade would be its newest ambassador of the brand, with a powerful image of Jordan and Wade standing shoulder to shoulder holding the Air Jordan 2010 suggesting that Wade would indeed be the future of Jordan. Wade rotated a healthy selection of Air Jordan Retro player exclusives as well as the new Air Jordan models like the Air Jordan 2010 and 2011. 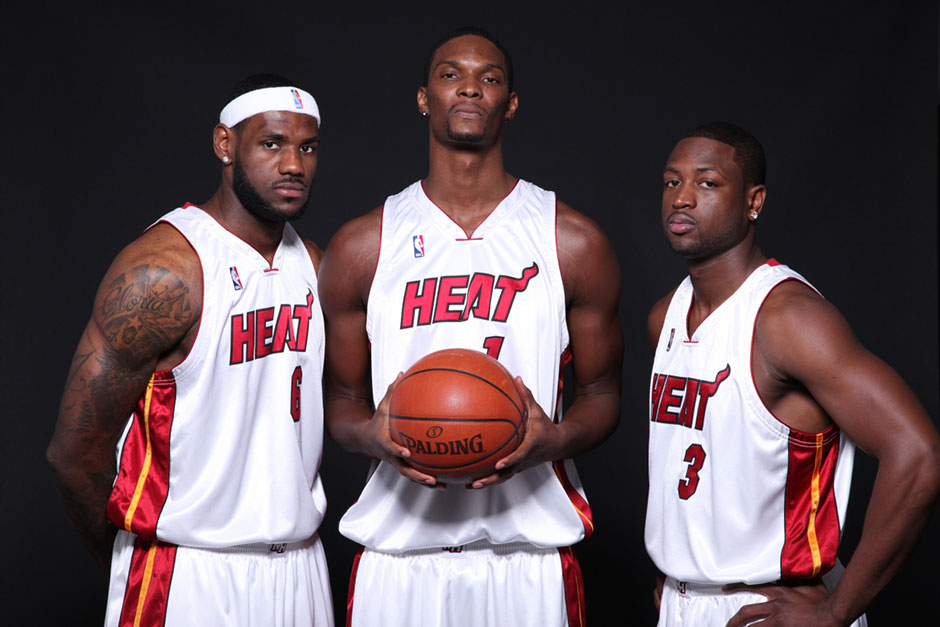 Above: LeBron James, Chris Bosh, and Dwyane Wade in Summer 2010

The timing couldn’t have been more perfect. LeBron James and Chris Bosh, the two biggest free agents of the 2010 NBA offseason, joined Wade in Miami to form a formidable Big Three – a true threat to take home the Finals trophy every year. This sort of presence in the Playoffs is huge on a marketing standpoint, which is why the debut of the Jordan Fly Wade right at the start of the 2011 NBA Playoffs was the perfect platform for success. 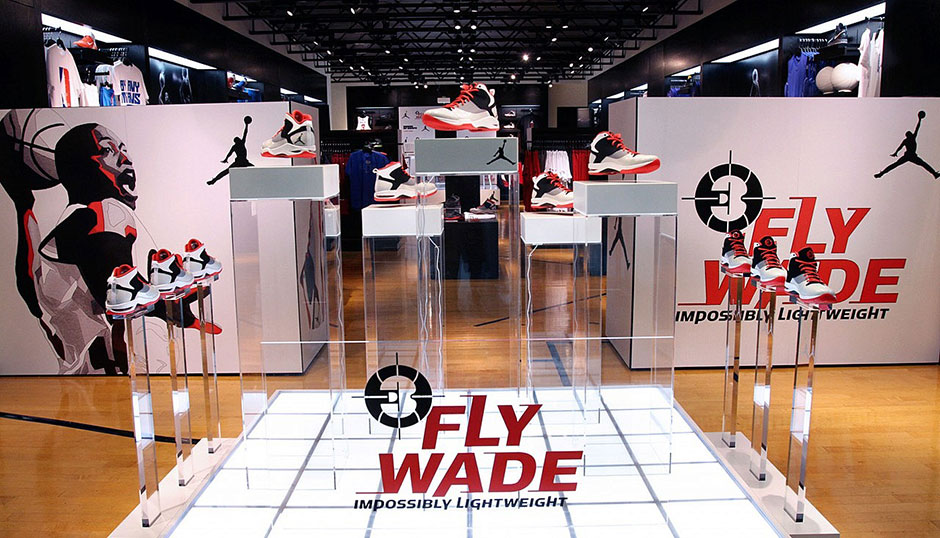 Jordan Brand’s first signature shoe, the Jordan Fly Wade, was unveiled in a series of colors as well as a predictable “Miami” colorway – a clear spin-off of the success of LeBron’s “South Beach” release just months prior. The shoes didn’t sell particularly well and Jordan Brand was actually sued because Wade’s logo was too similar to a that of a company called Point 3 Basketball. The lawsuit was settled and Jordan Brand changed the logo for Wade’s second signature shoe, the Jordan Fly Wade 2. 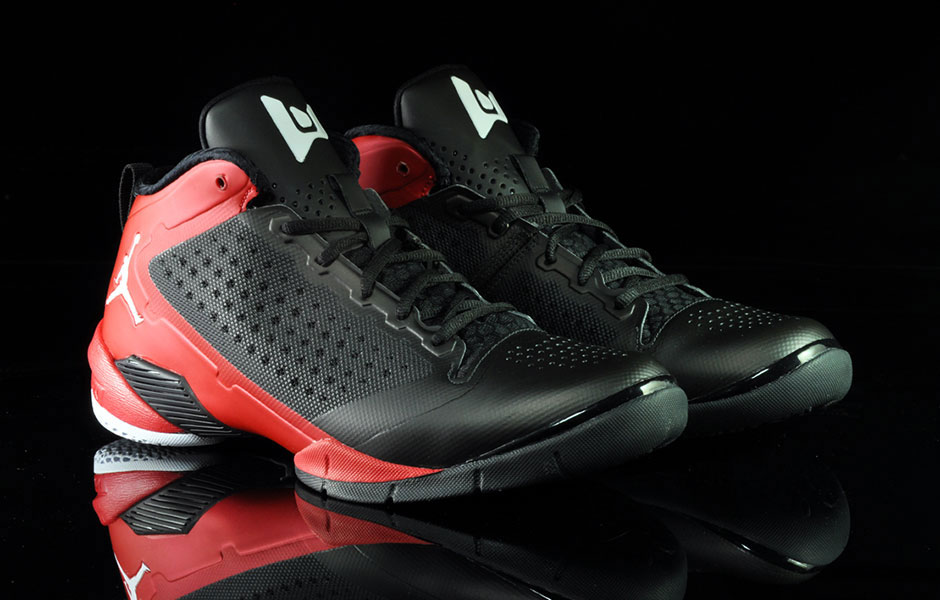 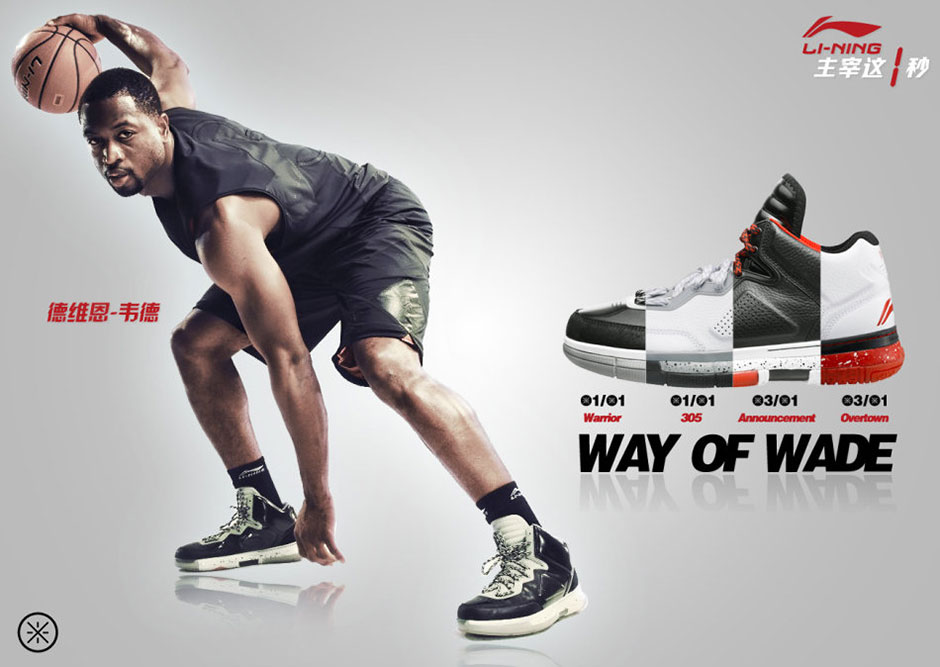 Above: Dwyane Wade’s Ad With Li-Ning

Despite the grand platform and stardom, Dwyane Wade’s signature shoes with Jordan Brand were an absolute flop. The shoes were, quite honestly, terrible and not indicative of a “signature shoe” that you’d expect for someone of Wade’s status. During the 2012 NBA offseason, rumors of Wade leaving Jordan Brand for Li-Ning, a Chinese brand, began to surface; Wade’s contract with Jordan was ending in October of that year and the two sides were unable to come to an agreement. 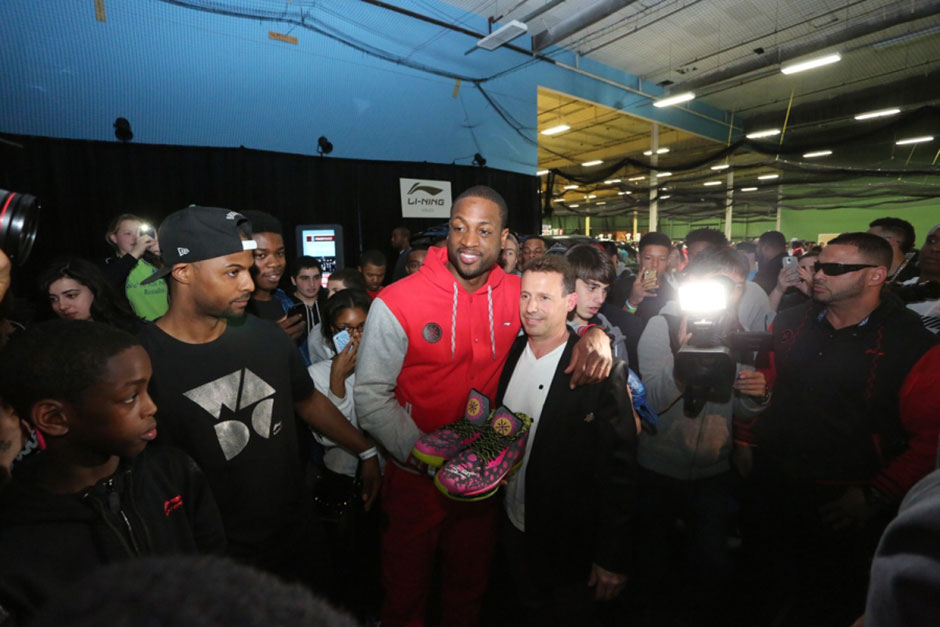 Above: Li-Ning Sets Up Shop At Sneaker Con Miami 2013

That opened the door to the Li-Ning/Wade era. While terms of the deal were never disclosed, it is believed that Wade received a stake in the company – and his hands-on approach was indicative of that level of partnership. Sneakerheads were certainly intrigued by what Li-Ning and Dwyane Wade had to offer and his first signature shoe, the Li-Ning Way Of Wade, did create some buzz thanks to some wild colorways.

Since then, Wade and Li-Ning have produced four signature shoes and a few take-down models, but the brand has yet to have a true imprint in sneaker culture or the athletic industry. The brand operates batch to batch and the pricepoint of Wade’s shoes, which starts at $180, is a bit tough to swallow given the lower-priced and more appealing options. Even a return to his hometown wouldn’t really change much for the Li-Ning Wade business outside of a small opportunities here and there.