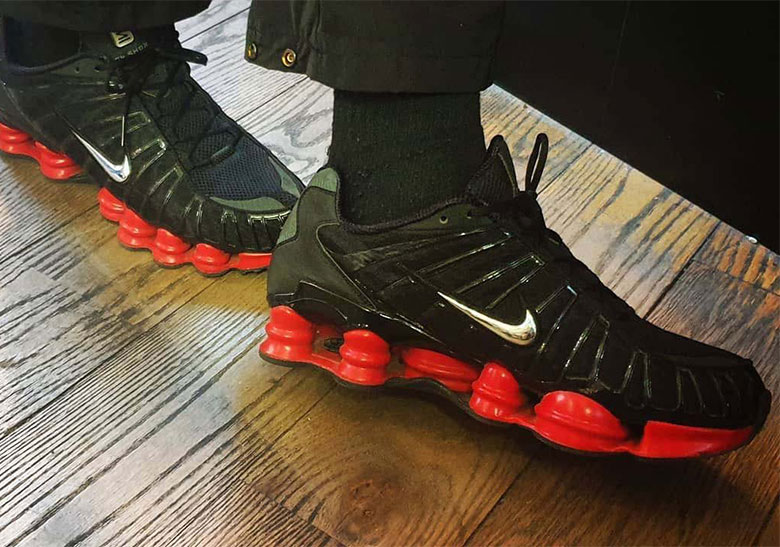 Hot on the heels of his recent Ignorance Is Bliss album, Skepta has joined forces with Nike once again, this time for a new take on the revitalized Shox TL. Sharp-eyed fans first spotted these new Nike shoes on Skepta’s feet during the “Bullet From A Gun” video, and the grime don continued to tease a potential project afterwards, as he was frequently spotted in TLs instead of his go-to Air Max during interviews and shows. The collaborative kicks feature a stark black base with accents provided by the vivid red foam pistons that run the length of the footbed, while standout pops of metallic silver grace the midfoot’s textured Swoosh and the tongue. Nike Shox are a somewhat surprising choice for a collaborative centerpiece, as Skepta is mostly known for his Air Max: he teamed with the Swoosh Brand for an Air Max 97 Ultra in 2017, and Air Max 97 BWs/Air Max Deluxes in 2018, plus a PE-only Air Max BW “Blacklisted” in 2016. However, with the renewed push around the classic turn-of-the century tech — especially on the TL, which has already been re-worked by both Comme des Garcons and Neymar Jr — plus Skep’s powerful pull with Nike Sportswear, this new project is certainly timely. Enjoy a first look above, expect a release September 12th for $200 USD, and stay tuned for more info/details on the inspiration behind the design as they’re available.