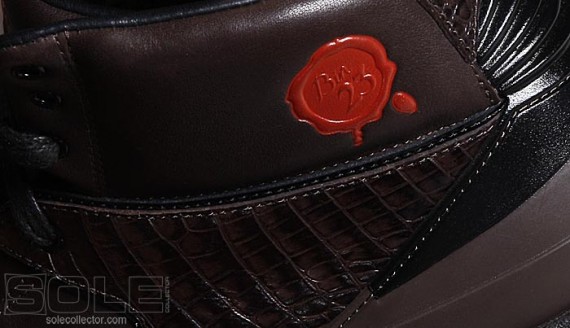 If you recall the Air Jordan II (2) Retro Brown Croc that was reported a few days ago, you might remember the red wax stamp that was placed on the upper left ankle. The wax stamp is actually a seal of approval; Jordan Brand is set to release the BIN23 collection which features Air Jordans constructed with higher quality materials and color-blocking fit for the older crowd, and the Brown Croc Air Jordan II is the first known member of that elite group.

Production numbers are set to be limited to some degree – we’re talking in the low thousands – so acquiring this higher quality shoe will definitely require a higher degree of effort. But you can’t help but scratch your head at the concept; while limited releases always draw large crowds and interest, the hundreds of dollars Jordan fans already pay for Retros should be enough for “material elevation”. The pricing hasn’t been announced yet, but you can expect anywhere from the high $100s to low $200s. Stick with Sneaker News for the latest info on the Air Jordan BIN23 Collection. via SoleCollector.
Jordan Brand Footwear Business Director Astor Chambers:

“BIN23 is an example of how you can make a small pinnacle experience. We’re starting this BIN23 concept that we’ll run for the year, and it’s basically just taking a look at things that never came out. We have this bin of just great things that we’re going to hand off to the consumer and let them experience. We have this very cool branding and experience around it that we feel really good about. It’s not going to be on the broader level of a release like the Space Jams, but it’s kind of like a smaller energy that’s comparable in size. We’re really excited about that. We’ll take that through the Retro filter, and it’ll be a colorway and material elevation.”