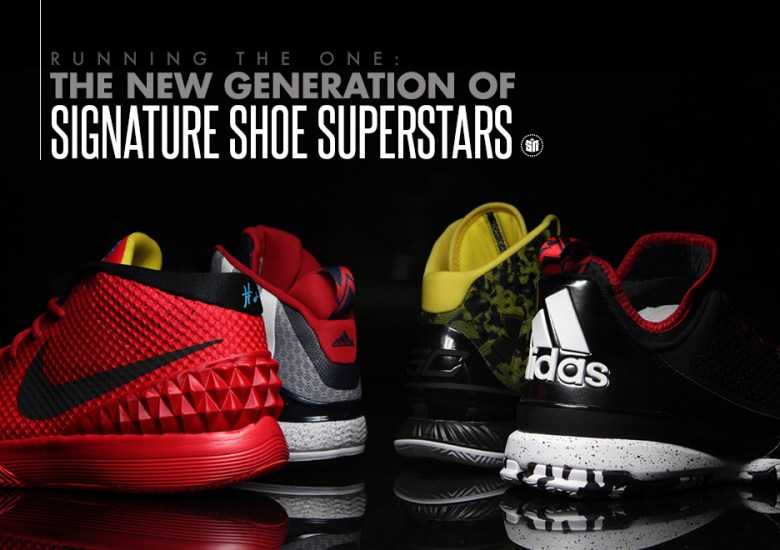 Running The One: The New Generation of Signature Shoe Superstars 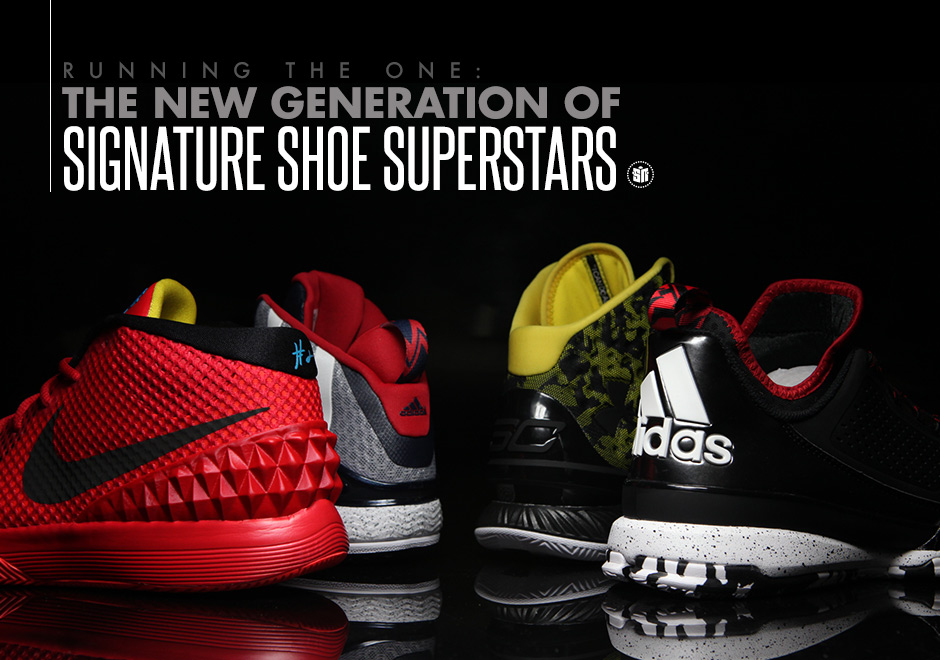 Throughout the first half of the 2014-2015 NBA season, we’ve witnessed the debut of four new signature athletes from three different brands. Nike nurtured Kyrie Irving since his rookie year and after a slew of PEs in the form of Hyperdunks and Hyperrevs, the Kyrie 1 was born. Steph Curry, who signed on to the fast-growing Under Armour before really exploding onto the scene, launched the Curry One in January. Damian Lillard, the clutch monster who has been rocking stripes since his rookie campaign, has the D Lillard 1 to call his own. And John Wall, a player who has been consistently overlooked in the Eastern Conference, is now the starter for its All-Star squad. The future of the NBA is certainly bright and the era of the point guard is going to be long and prosperous one, and we’ve never witnessed such a strong crop of floor generals lead the charge into a brand new chapter of basketball.

That said, the pressure is on the sneaker brands to step up to the plate and deliver fresh new products and innovation for a set of players that never shared the superstar spotlight like these four youngsters do. Nike certainly has a strong hold on the basketball category thanks to Kobe, LeBron, and KD, but this new wave opens up opportunity for adidas to take back some of the share that was once theirs and for Under Armour to claim territory of their own, and this competition makes for some potential shift in an industry outlook that has remained relatively the same over the last decade. What makes this really interesting is Nike welcomes the competition in this new sector of point guard signature stars, so in the end, the consumer wins out. Check out our overview of these four new signature shoes below. 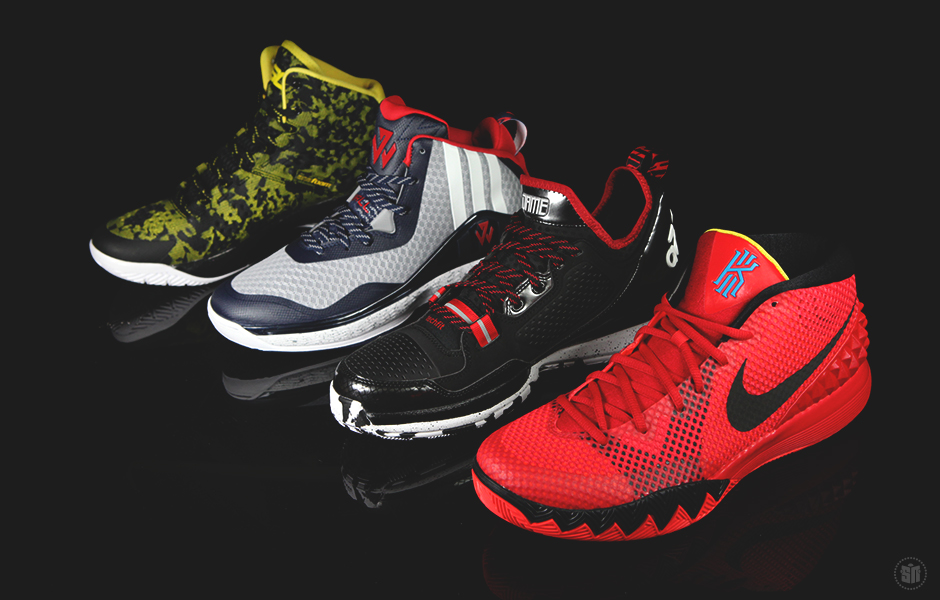 TEAM COLORWAYS WITH AN EDGE

Team colorways are paramount to setting the proper tone for a brand new signature shoe. The “Deceptive Red” is deemed a “Home” colorway of sorts, but the brighter hue of red allows Kyrie to be visible from up in the nosebleeds. Under Armour followed suit with their own energetic take on things and went a unique camouflage print on a black/yellow base that stood out quite effortlessly during the debut game.

adidas Hoops, the most reserved of the three in terms of colorways, opted to keep it as conservative as possible. But there are minute details that give the shoes a nice boost, like the camouflage outsole on the D Lillard 1 and the speckled sole on the J Wall 1. Overall, all four brands did amazing jobs with cementing these Team joints, because the door is now wide open for more creativity. 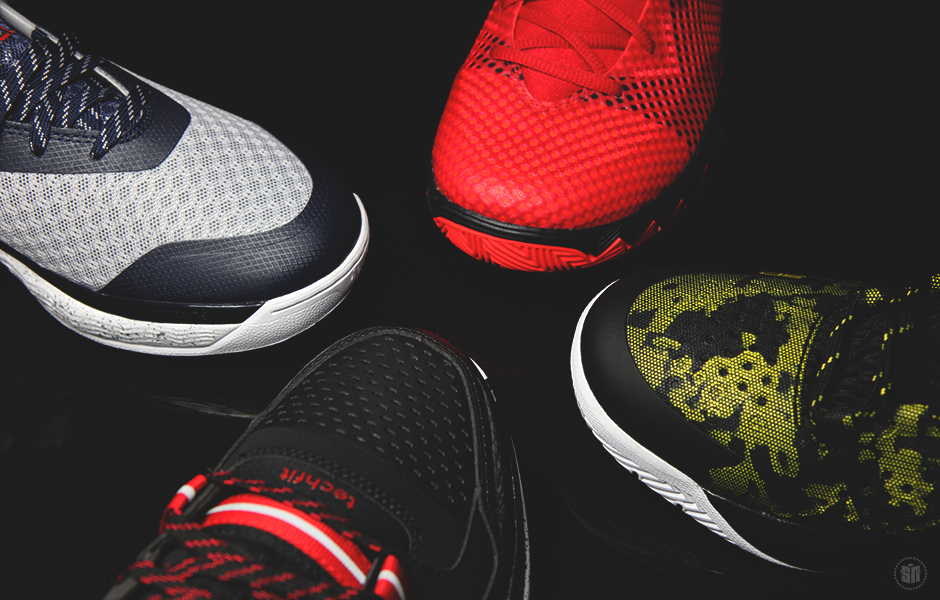 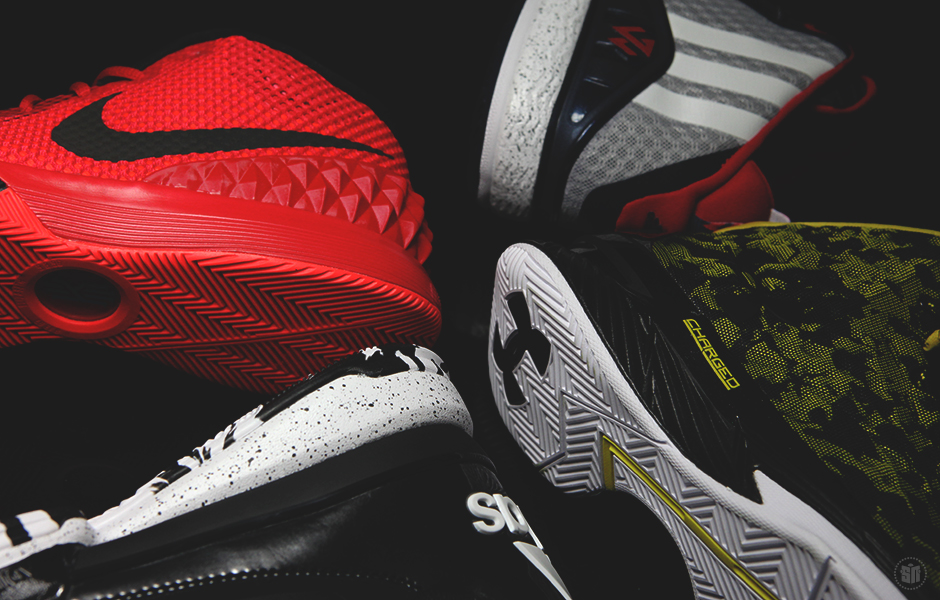 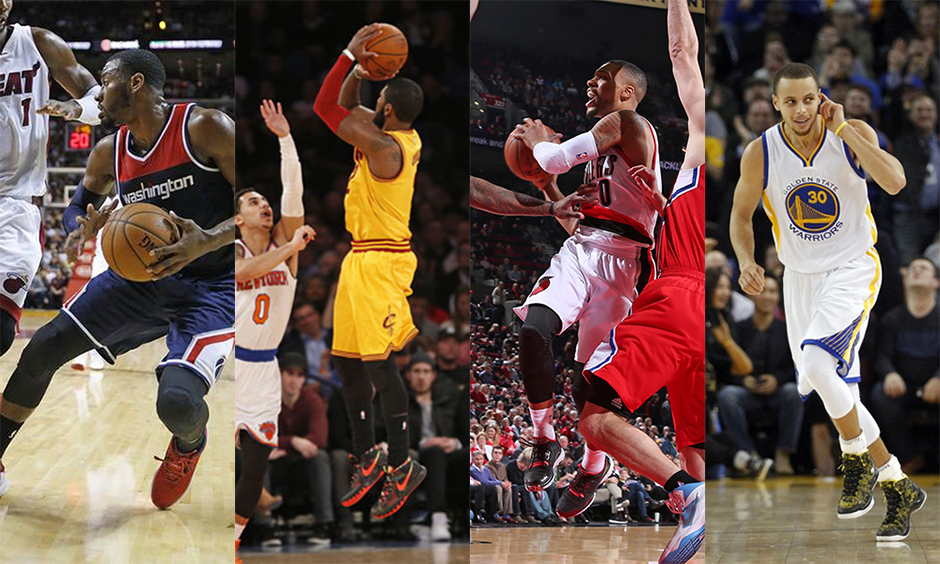 KYRIE IRVING – Irving wins this category, hands down. Kyrie laced up the “Dream” colorway against the Knicks in front of a raucous MSG crowd and carried the offensive load from the get-go. The newest Nike signature athlete dropped bucket after bucket including a late-game lay-up that sealed the victory. 37 points while hitting two out of every three shots – that’s the dream right there.

STEPH CURRY – Curry suited up in his signature shoes for the first time on an NBA court on Friday, January 9th, against the Cleveland Cavaliers. The star guard led his team to a convincing victory by tallying 23 points and 10 assists while shooting at a high percentage from the field. Overall the Warriors at 6-1 when the Curry One is on the court.

DAMIAN LILLARD – Lillard arguably had the worst game of the four, tallying just 15 points on 31.3% shooting chipping in 4 assists and 3 rebounds towards a loss to the Los Angeles Clippers, a Western Conference powerhouse and potential opponent in the Playoffs. 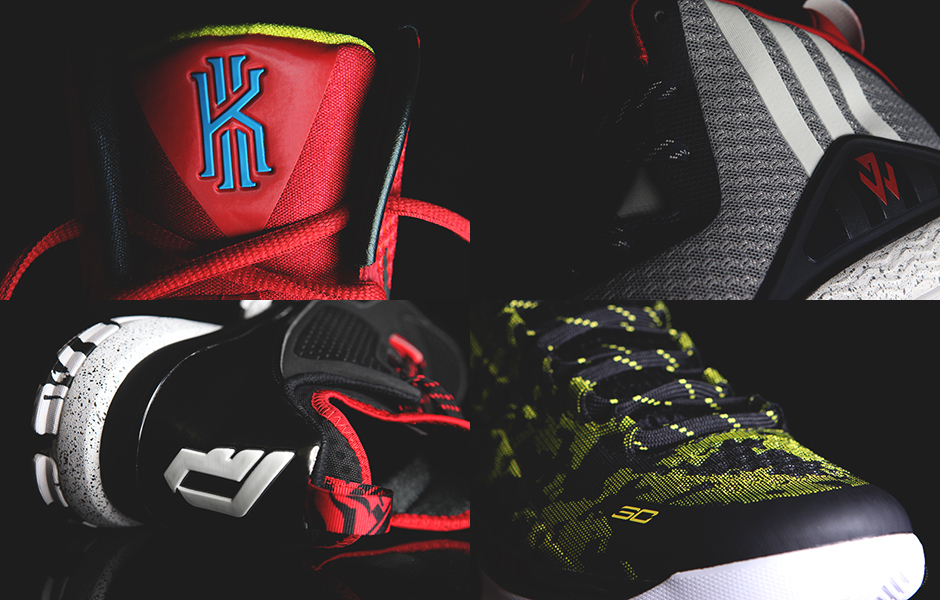 Ushering in a new generation of signature athletes means that graphic designers and branders have the task of creating the appropriate logos for each player. In addition to the logos, some other player-specific details adorn the shoe; signatures, player names, favorite bible quotes, and more give these four even more of a personal, made-for-player feel. 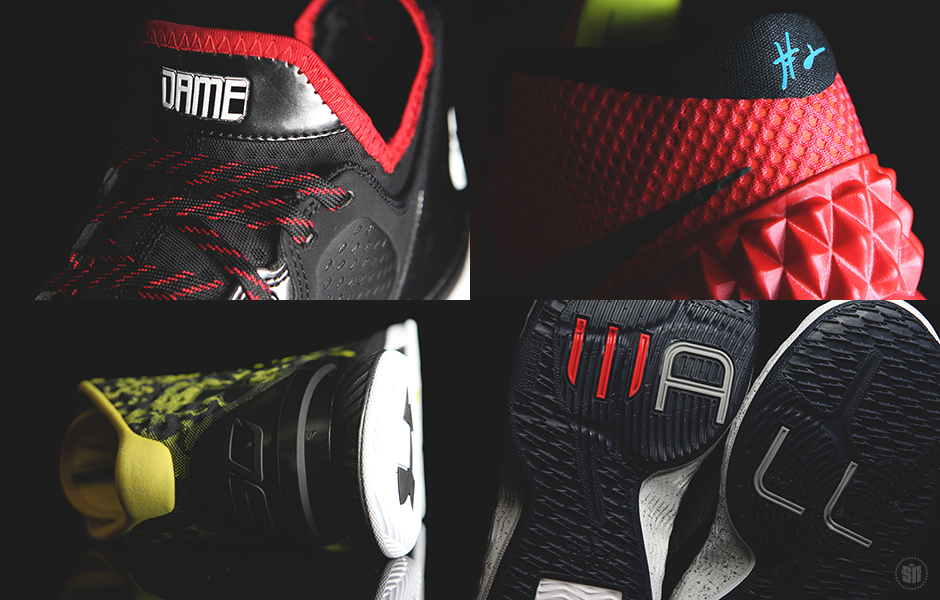 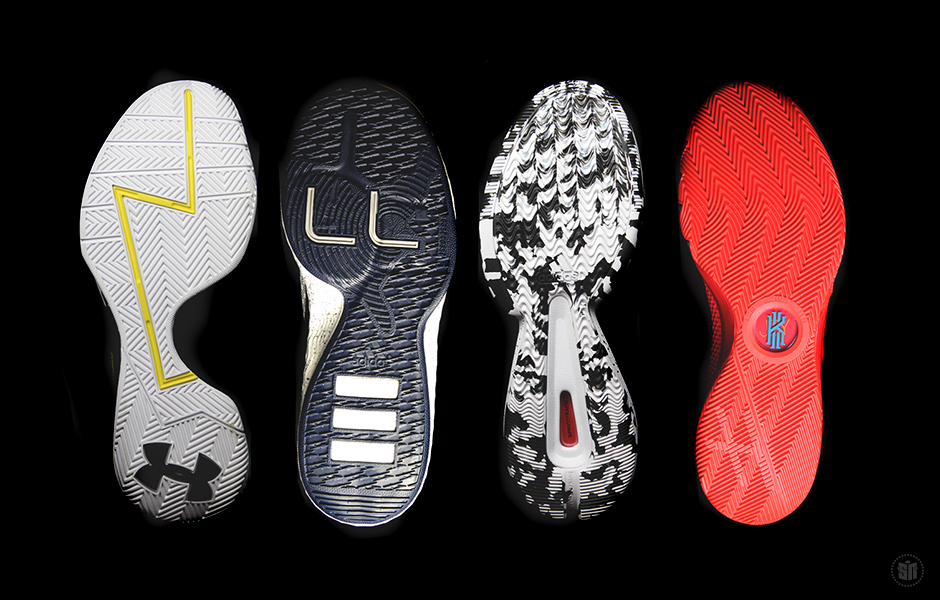 There’s no question that point guard position demands more on-court traction than any other position, and given the heightened speed and agility that these four players exhibit night in and night out, the designers have the added task to add maximum grip on a conventional sole. 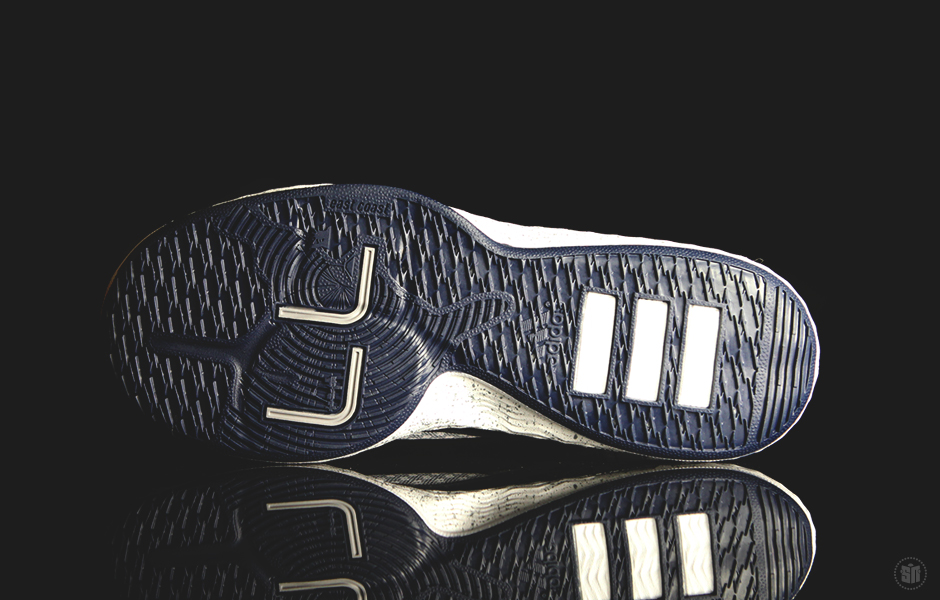 The J Wall 1 brings in a bit of an anatomical look, with grooves at the toe and pivot point allowing for flexion that aligns with natural movements. 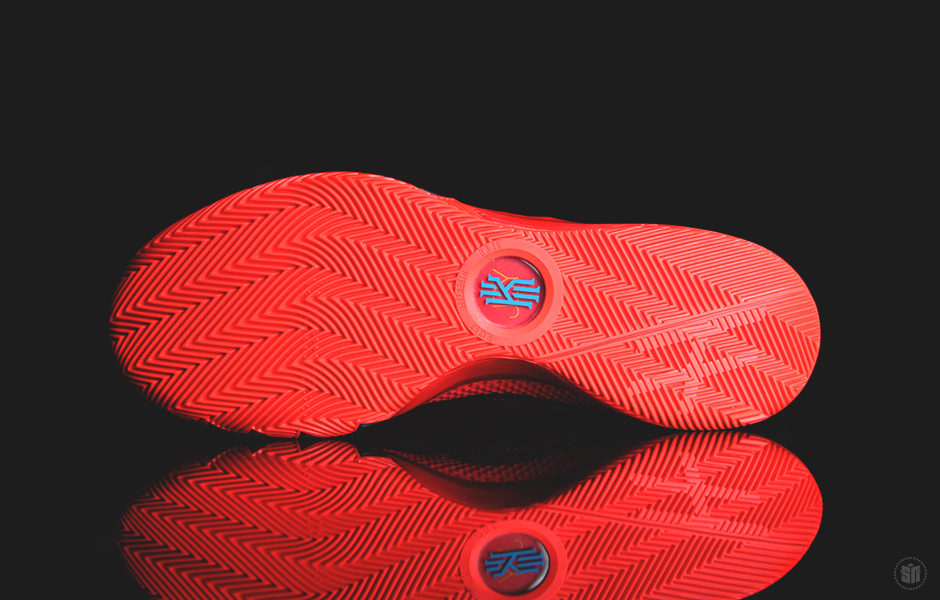 The Kyrie 1 combines a classic herringbone traction with an incredible forefoot traction system that wraps up the foot. This is not only a slick design cue, but a performance necessity for Kyrie, who slides and drags his feet around during his ballet-like movements on the perimeter. 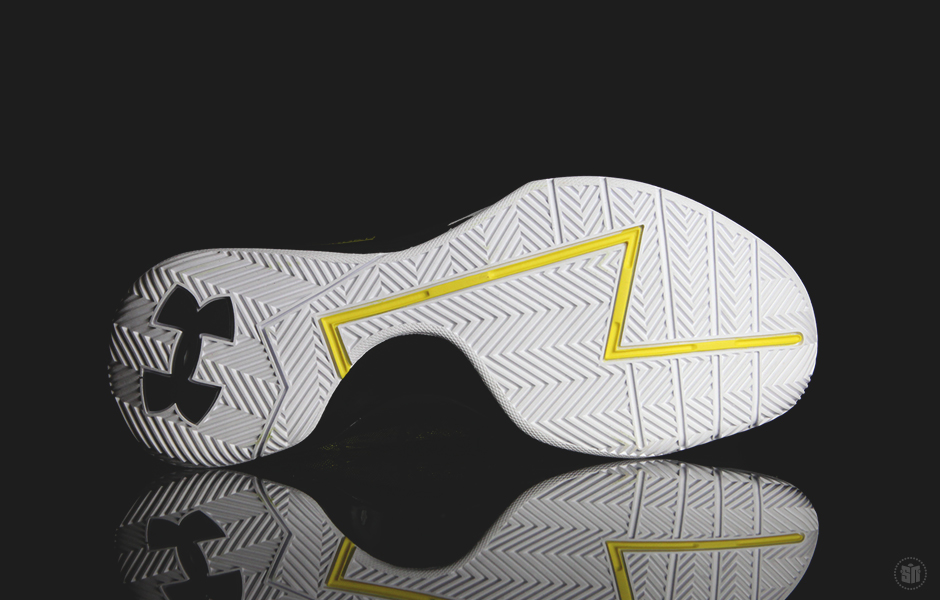 The arrangement of the Curry One traction can be viewed as three parts, but our favorite is the forefoot, where flex grooves at the toe propel Curry upwards for his quick-launching jumpers. 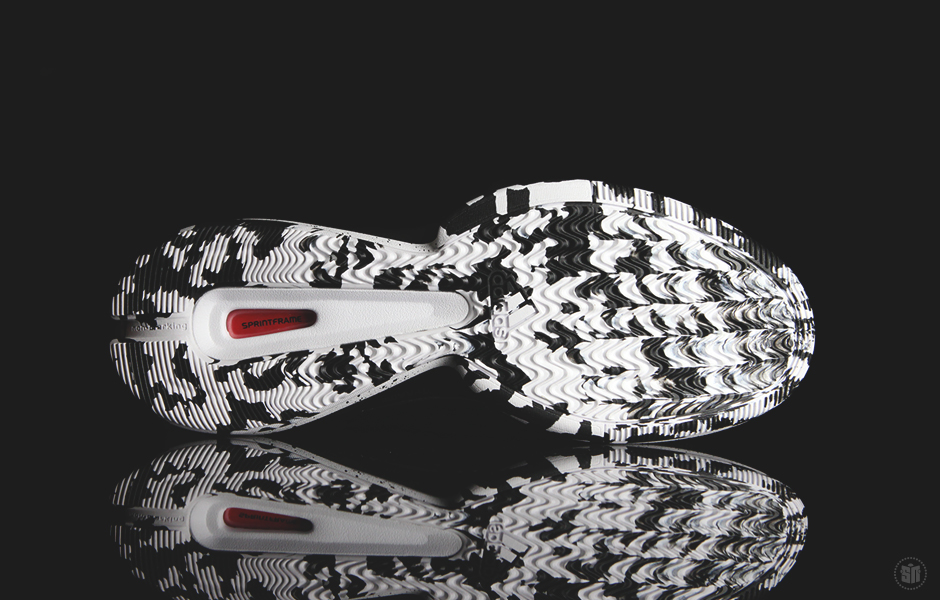 The Lillard 1 brings in harsh edges around the sole that assist in Dame’s stop-and-go and jab-step friendly game. Perfect for those buzzer-beating 3-pointer daggers. 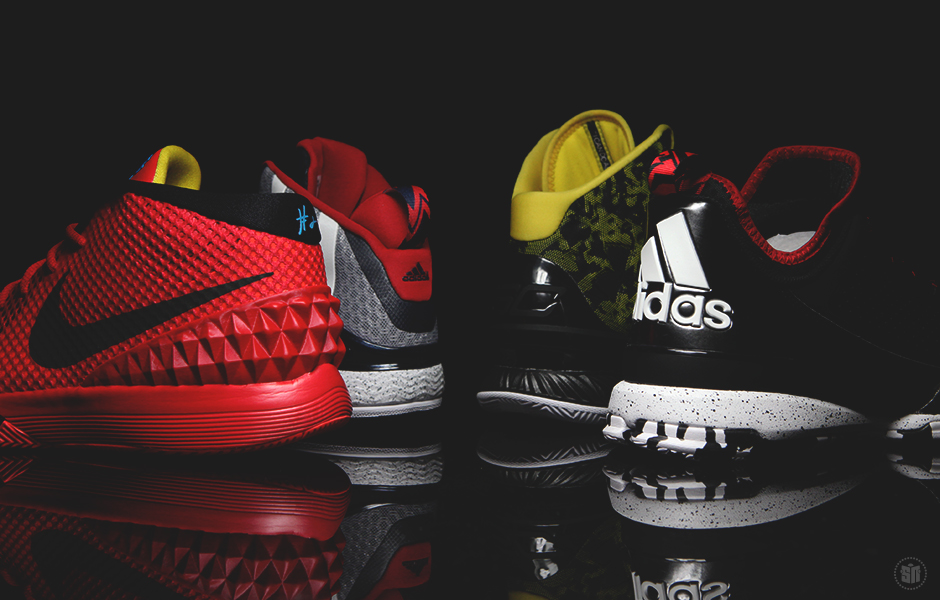 We’re excited. This cluster of signature shoe debuts coincides with the resurgence of the star point guard, and to have all the relevant brands come forward with great designs backed by bonafide stars only spells out some interesting competition in the coming years. Nike has undoubtedly dominated the basketball scene on the strength of Kobe Bryant, LeBron James, and Kevin Durant – three stars who have amassed a number of individual awards and NBA Finals appearances among them. But as Kobe leaves the game and LeBron enters the final third of his own career, it’s time to usher in the new generation of stars to reshape the industry.

The beauty of this all is that Kyrie, Lillard, Curry, and Wall all have the potential to match what those elite ballers have accomplished, but determining who will come out on top is up for debate. Nike has a lot to benefit from the debut of the Kyrie 1; they’re building out the launch strategy to mimic the Nike KD line, which will eventually graduate to the flagship status. If the brand executes, that’s huge dollars, and it also takes away some of the spotlight from the Nike Penny line, which has lost some steam over the last few years (over-saturation of Foamposite, disconnect of the sneakerhead community from a retired athlete).

Under Armour is relishing in the emergence of Steph Curry as an NBA MVP candidate. After signing the injury-prone guard in 2013, UA has risen alongside Curry’s stardom and talent. Under Armour is, of course, light years behind Nike in terms of developing their basketball category, but they’re getting off on the right foot in these early stages by releasing a signature shoe priced at $120 for a player that is considered one of the most popular in the league.

adidas has Lillard and Wall to bounce back from the unfortunate decline of Derrick Rose. The Chicago guard will forever be a shell of his former self, and because of that, Lillard and Wall need to step their respective games up, and adidas has to market the product more strategically seeing that Portland and Washington are “middle of the pack” in terms of market.

Overall, a new era of basketball shoes is here, and it can be argued that all four athletes are simultaneously at the starting line. Four bona-fide All-Star guards with bright futures as franchise cornerstones and their own kicks to boot? We’re in. 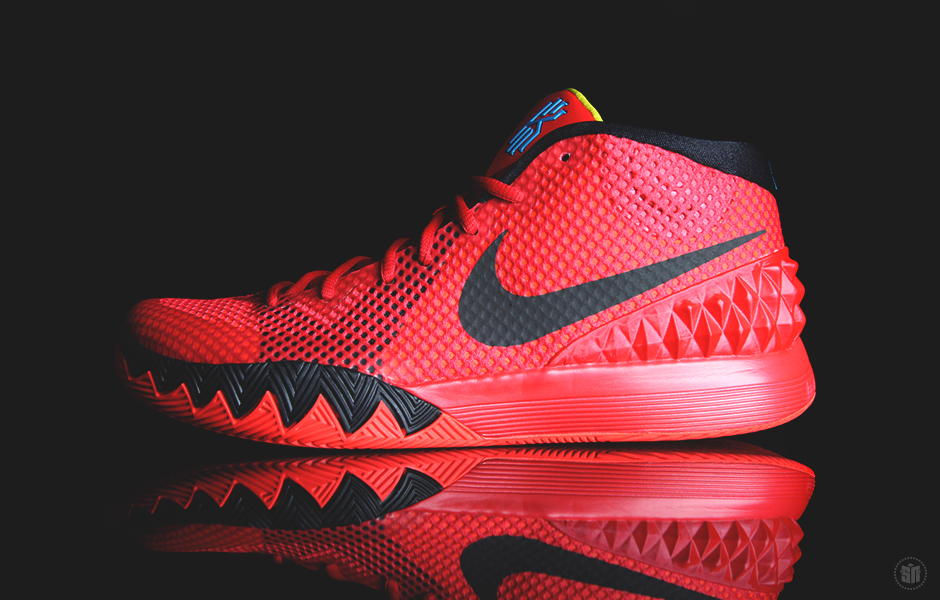 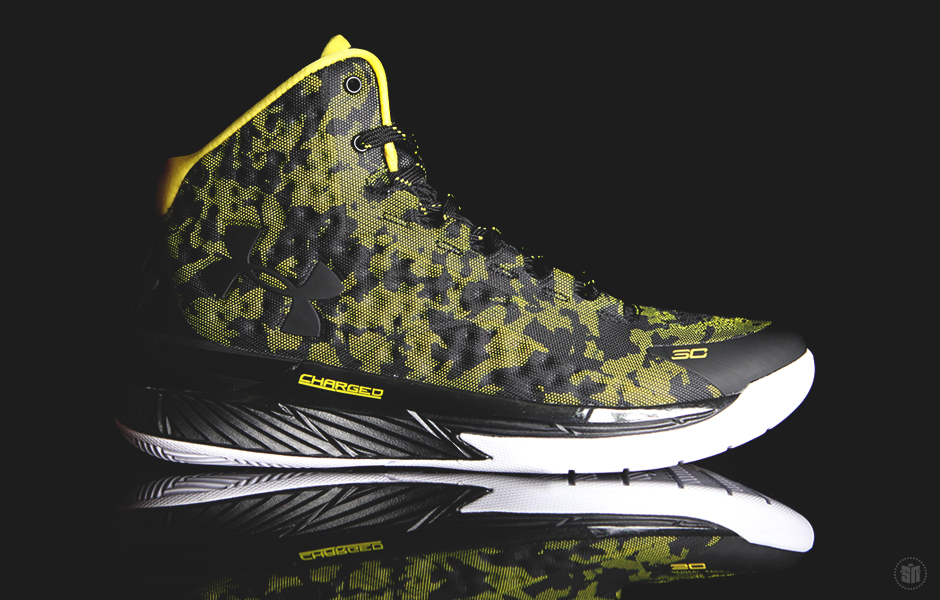 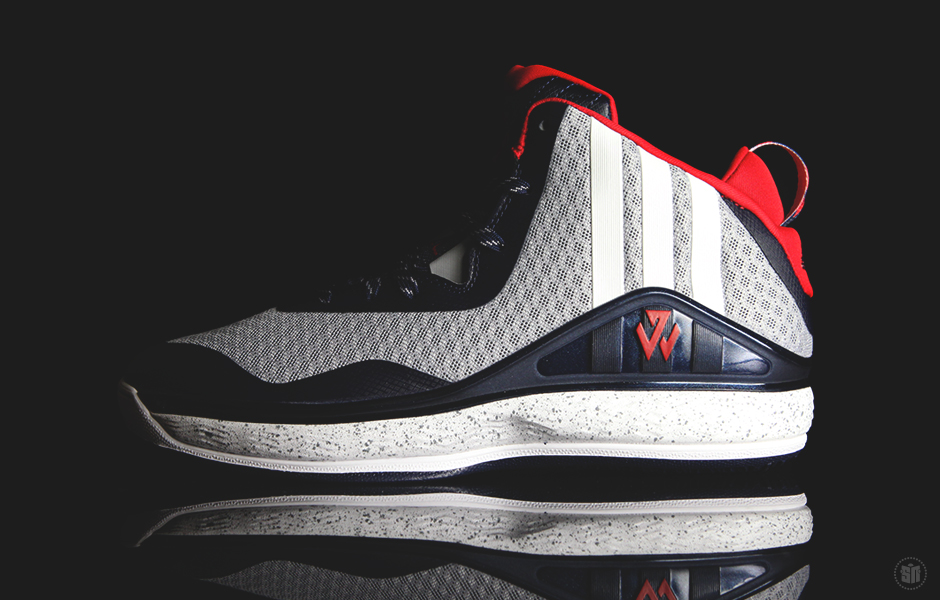 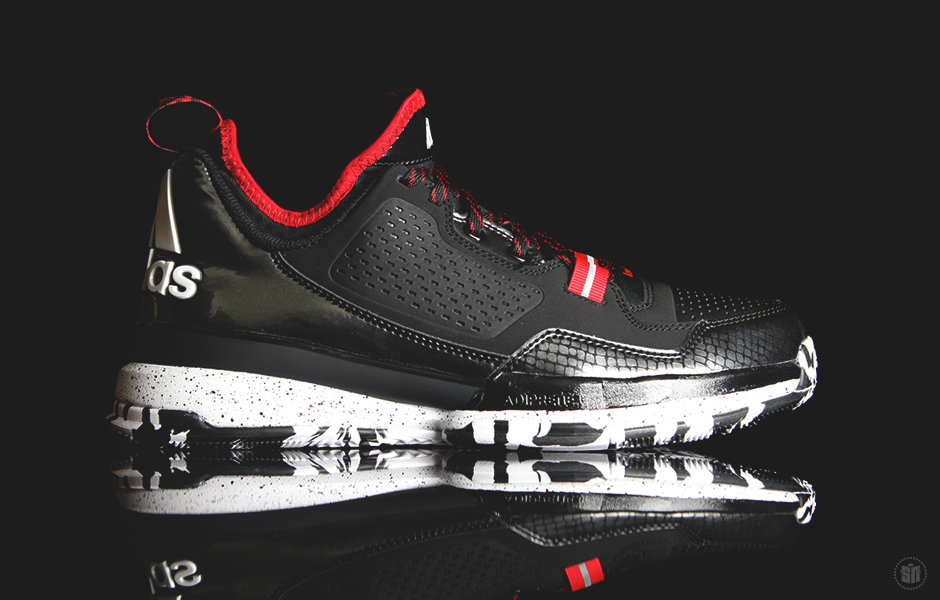