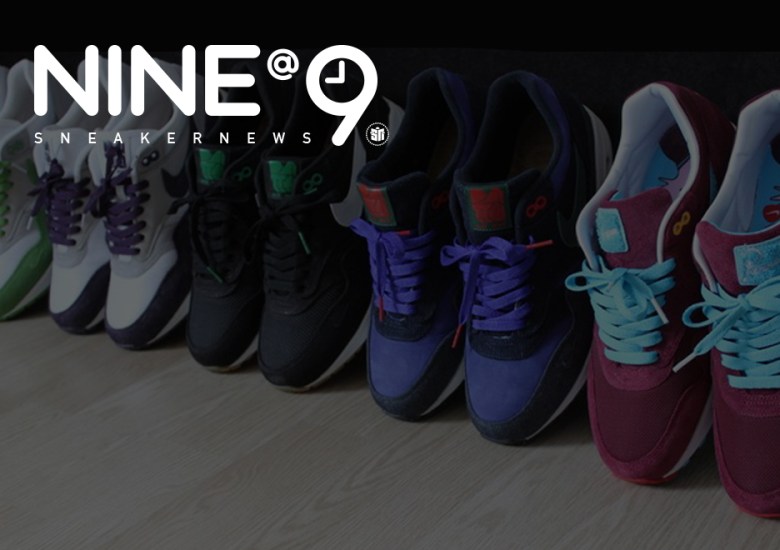 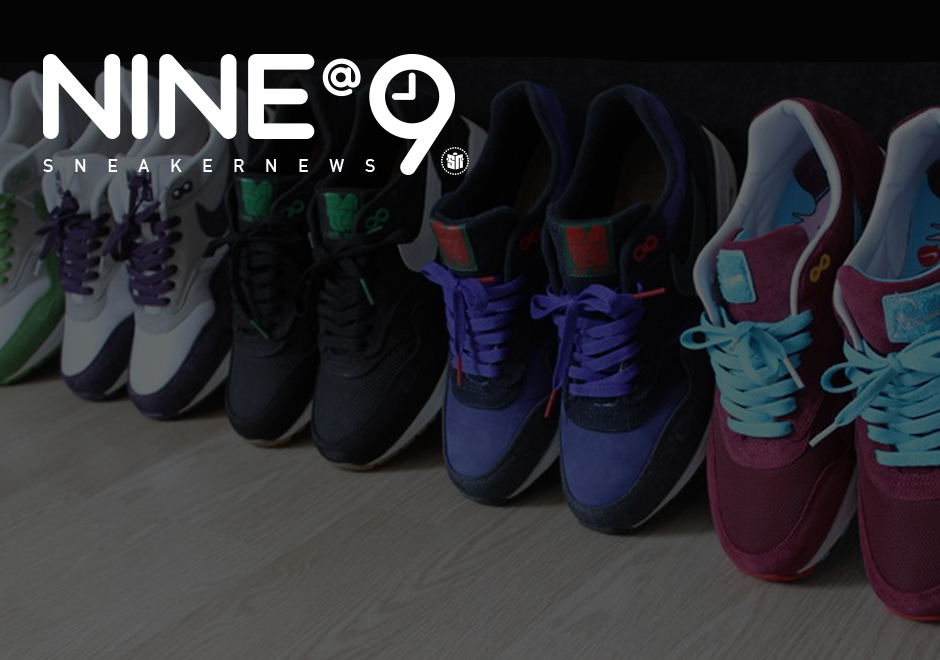 Throughout sneaker history—and now even more than ever—there have been countless collaborations between sneaker brands and the boutiques, personalities, and fashion labels that run parallel to sneaker culture. A collab here, a collab there; the sneaker world is at a point where the next premium edition of a classic shoe done up by the latest trendy name or elite boutique is hardly news at all. Whether or not brands should cut back on the collabs is up for debate, but there has no doubt been some serious heat unleashed when two parties get together to construct a creative take on a sneaker, giving the model a whole new life.

While the sneaker collabs out there are many, most are for a single shoe with a single release. The unified “pack” of sneakers under a particular theme are a much larger undertaking with much more work for everybody involved, so a collaborative effort on more than one or two shoes is still more of a rarity. For this edition of Sneaker News NINE@NINE, we’ll take a look at the most notable projects in the sneaker collab game throughout time that have offered up three or more themed sneakers. 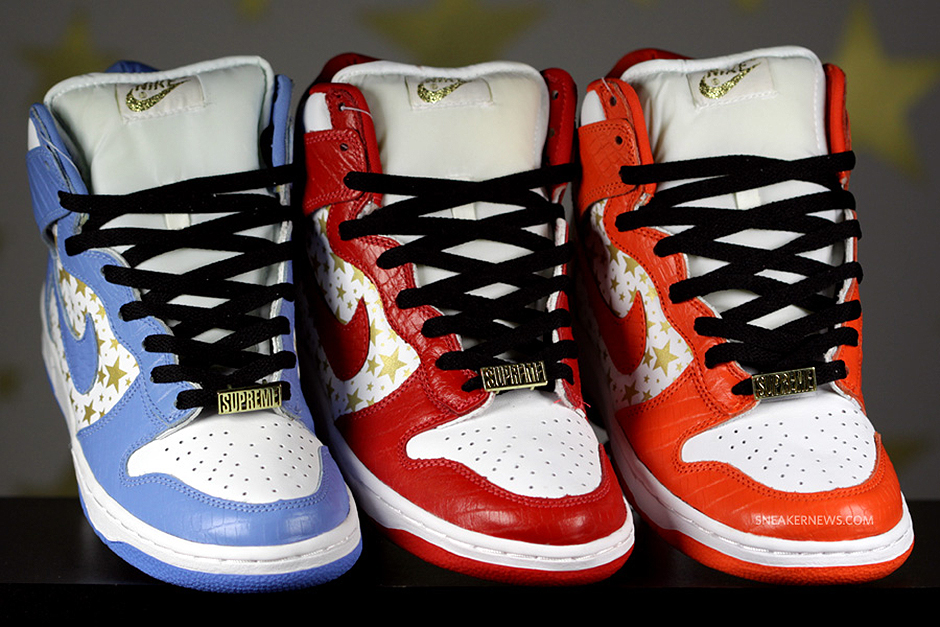 Supreme x Nike SB Dunk High “Stars”
Remember when Supreme was merely a legit New York skate shop? We don’t really either, but we do all remember these Nike SB Dunk High collabs from 2003 before Supreme blew up into the trendy streetwear behemoth we know them as now. The starry, croc-skinned Dunk High in three colorways can be at least partially to thank for the hype machine that surrounds the red box logo brand today. 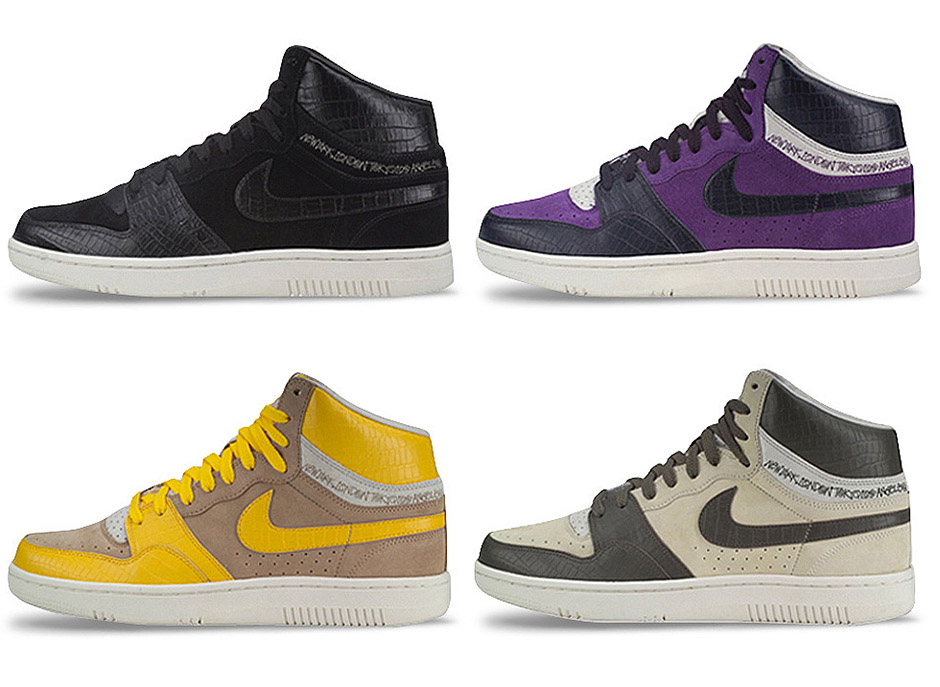 Stussy x Nike Court Force “World Tour”
Stussy went on a “World Tour” to celebrate their 25th anniversary in 2005 with a four-pack of the Nike Court Force. Notable as being the first “outsider” that Nike ever collaborated with when the two teamed up for the Air Huaraches in 2000, Stussy didn’t disappoint with these four colorways of the Court Force, which can easily be considered the best versions of the shoe ever. 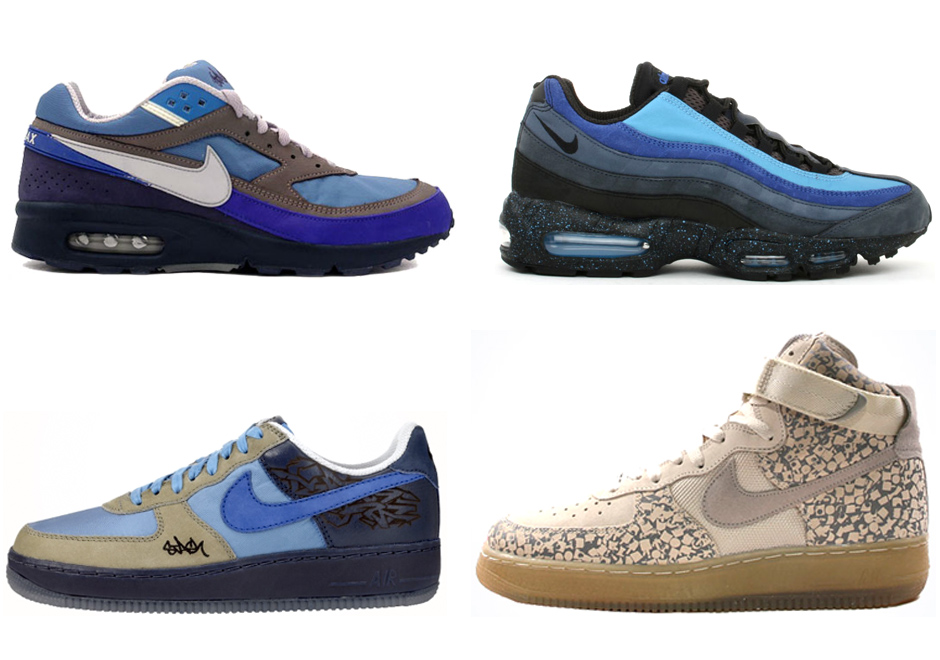 Stash x Nike
Legendary graffiti artist Stash got in good with Nike, releasing a series of his now-iconic colorway on the Air Force 1 Low, Nike Air Max 95 and Air Max BW, as well as the Air Force 1 High adorned with spray can caps. All rank among the most sought after editions of each model ever. 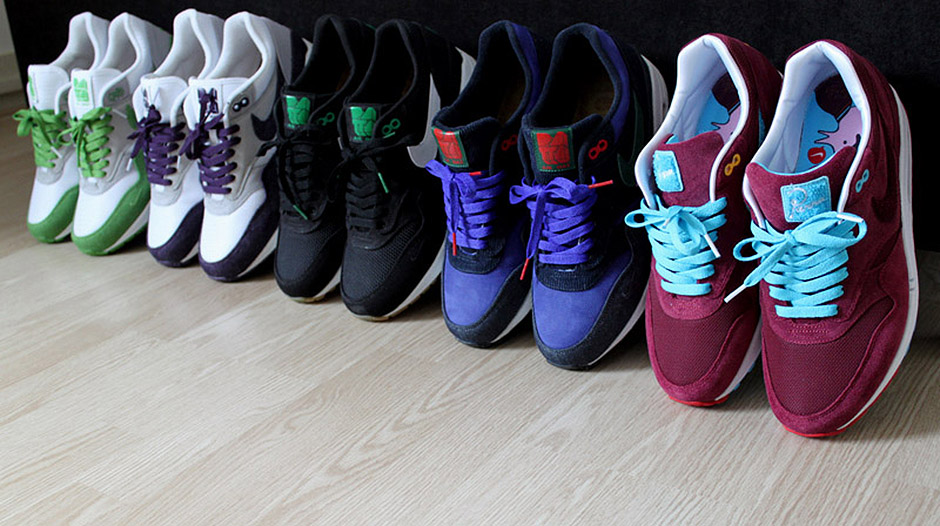 Patta x Nike Air Max 1
At least one of the colorways in this set of Air Max 1s by Amsterdam boutique Patta usually makes it into almost anybody’s list of favorite colorways of the model. Actually, this amazing set doesn’t fall into any specific theme or storyline, like the rest of the collab packs in this feature do, but they are just too good to leave off. Throw in the Parra version, and we’ll just go ahead and say the theme is, “The Best Air Max 1s Ever”. 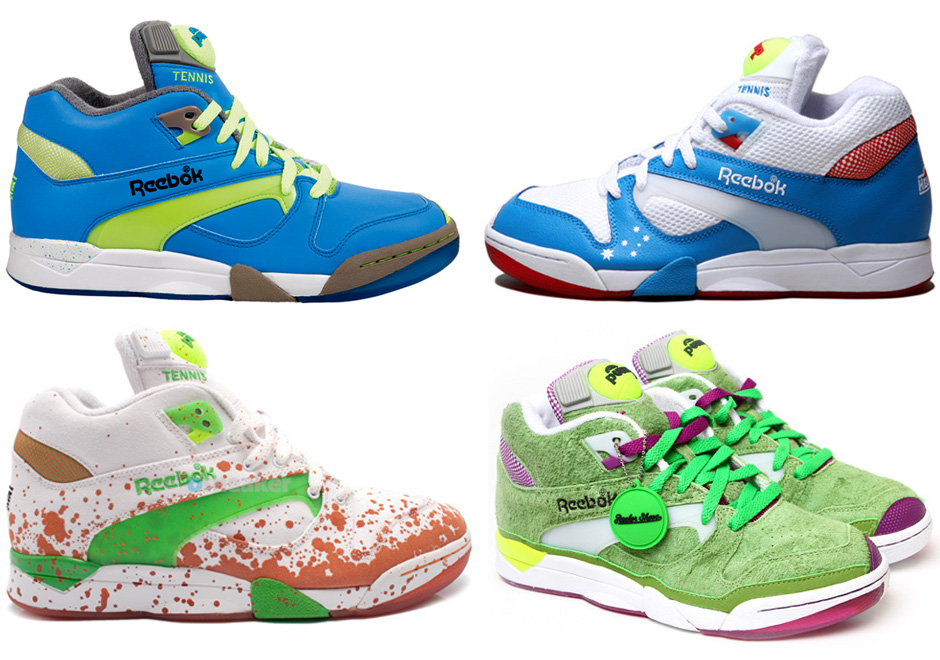 Packer Shoes x Reebok Pump Court Victory “Grand Slam”
In 2011 Packer Shoes gave fitting tennis themes to the most famous Reebok tennis shoe with the the Pump Court Victory in colorways inspired by the four major tennis tournaments, also known as the Grand Slam. The U.S. Open version came in blue matching the hard blue courts of the tournament with tennis ball neon accents; the Australian Open version also came in a blue court inspired colorway with white and red from the Australian flag completing the look; the French Open was represented with the original Court Victory colorway splattered with clay representing the tournament’s clay courts; and the the Wimbledon version featured a grassy upper symbolizing the grass courts of the All England Club. 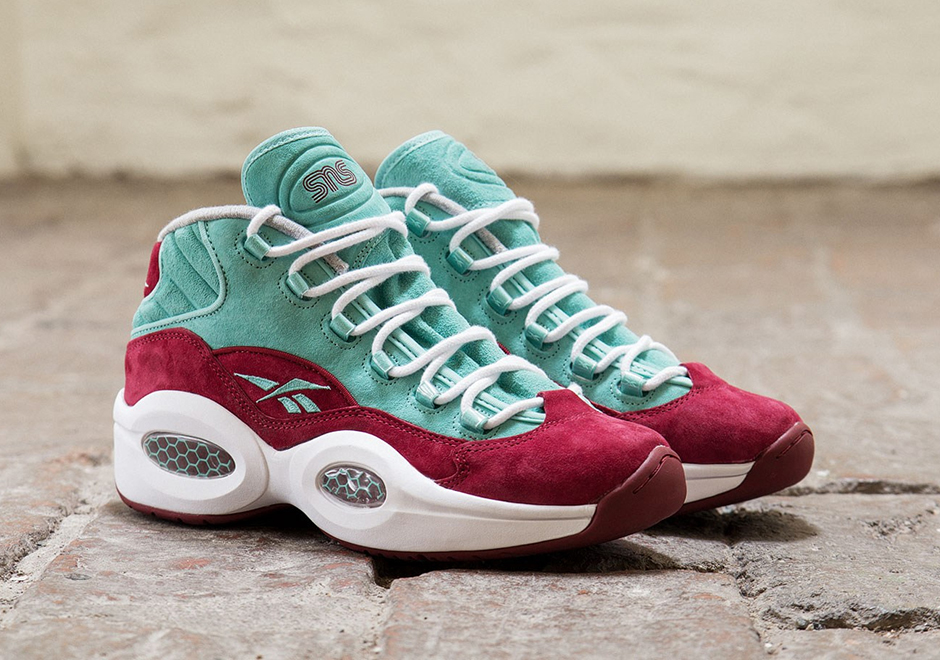 Sneakersnstuff x Reebok “Year of Collabs”
Swedish sneaker suppliers Sneakersnstuff impressed with a major project with Reebok in 2013, releasing one collab sneaker every month of the year. All inspired by some aspect of Swedish culture, the huge undertaking produced memorable versions of the Kamikaze II, Insta Pump Fury, and Question among other classic Reebok models. All said and done, it was perhaps the most ambitious sneaker collaboration project to date. 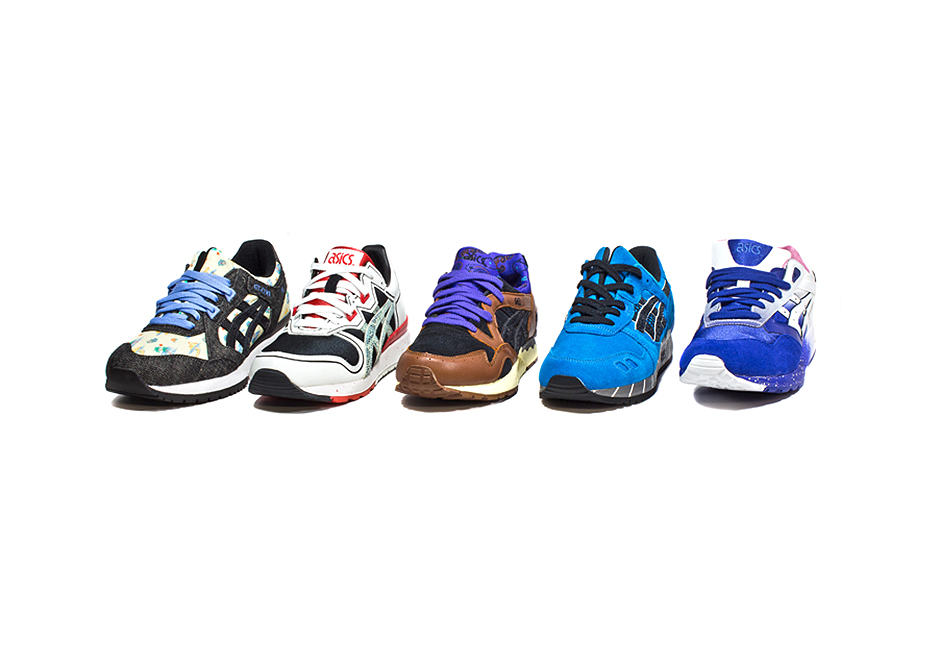 Extra Butter x Asics “Death List Five”
Extra Butter tapped into their love of film with the Death List Five collection, inspired by Quentin Tarantino’s Kill Bill. Five Asics retro runners were outfitted in colorways taken from the wardrobe of the five characters on The Bride’s death list, with all five shoes releasing throughout 2013. The collection is still one of the largest themed packs to hit the sneaker market. 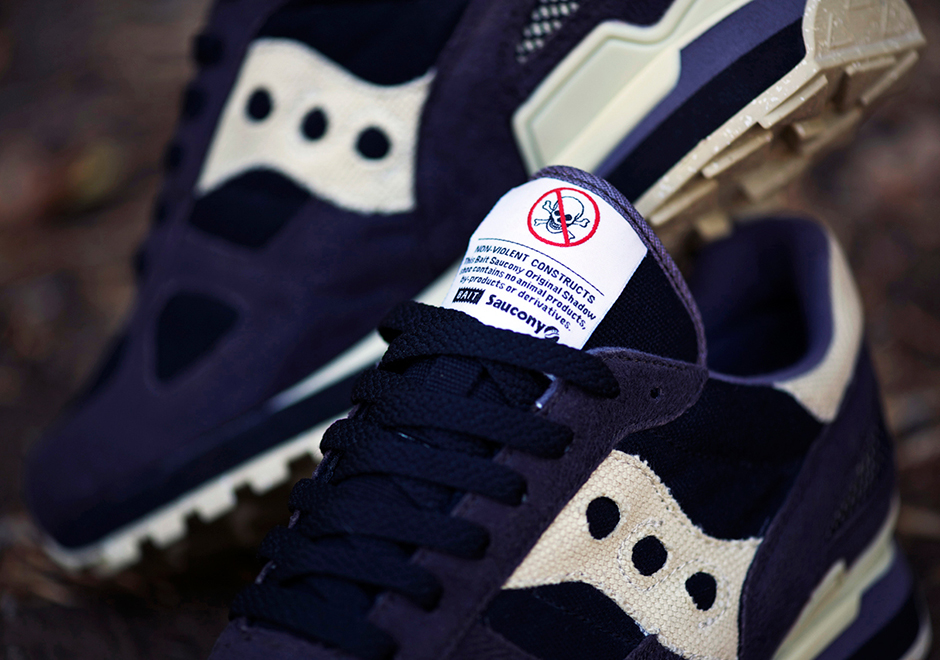 BAIT x Saucony “Cruel World” Collection
Not only do all the sneakers look great, they’re for a good cause. Beginning in 2013, the ongoing collection from So-Cal sneaker shop BAIT and Saucony aims to raise funds and awareness for different causes with each release. From environmental charities to the American Cancer Society, the sneakers have raised tens of thousands of dollars, proving that sneakers can be more useful than just forming a pile in your closet. 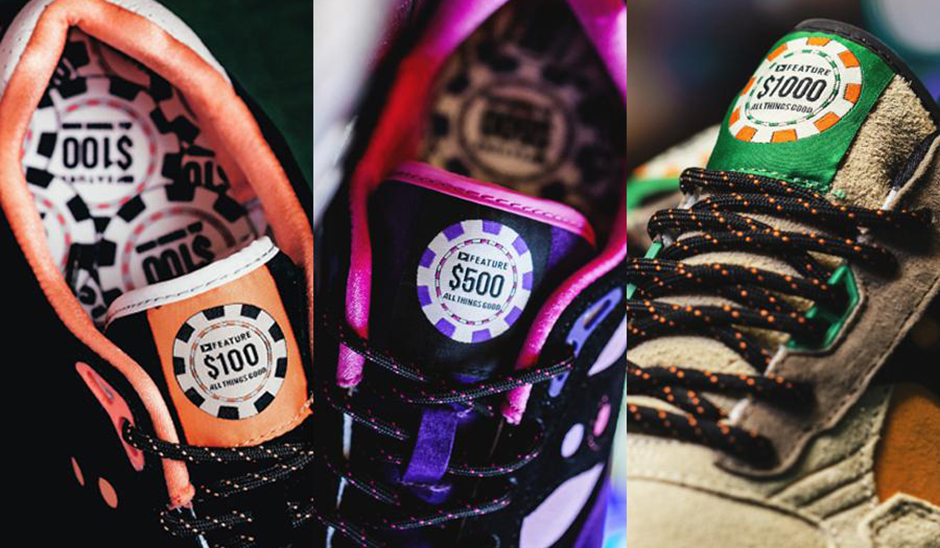 Feature x Saucony “High Roller” Pack
For th emost recent luti-sneaker themed pack, Las Vegas sneaker boutique Feature uses some hometown inspiration for the High Roller collection. The set utilizes colorways from casino chips for three Saucony runners, including the $100, $500 chips on the G9 Shadow 6 and the $1,000 chip for the G9 Shadow 5. Built in premium materials with unique colorways, these sneakers will definitely keep you feeling like a high roller.