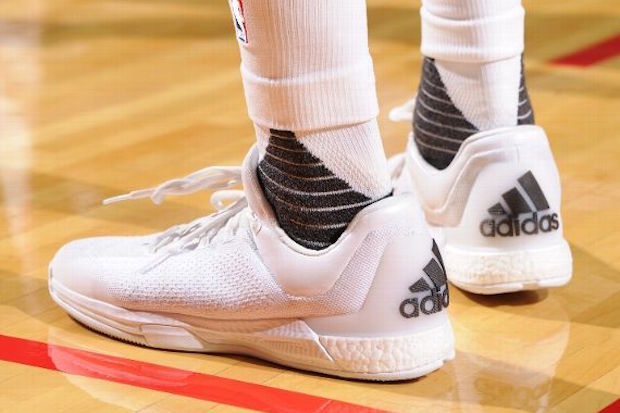 The controversy is over. James Harden is officially an adidas athlete and the three stripes made sure to keep him stocked by showing up at his house with a moving truck loaded with the latest kicks on the first day his contract was set in motion. So what is Harden wearing during the earliest days of the pre-season? He’s had an affinity for monochromatic pairs of the adidas Crazylight Boost 2015 as of late, wearing an all-red colorway and more recently this white on white variety. Arguably adidas’ best basketball offering, the $130 pair utilizes a flawless Primeknit construction while Boost cushioning adds supreme comfort. While we wouldn’t categorize this as a PE of any sorts, we’re excited to see what the next pair Harden will lace up. You know a signature is coming, because when a brand pays someone upwards of $200 million they can’t afford not to. Hopefully it’s in the same league as the Crazylight Boost.