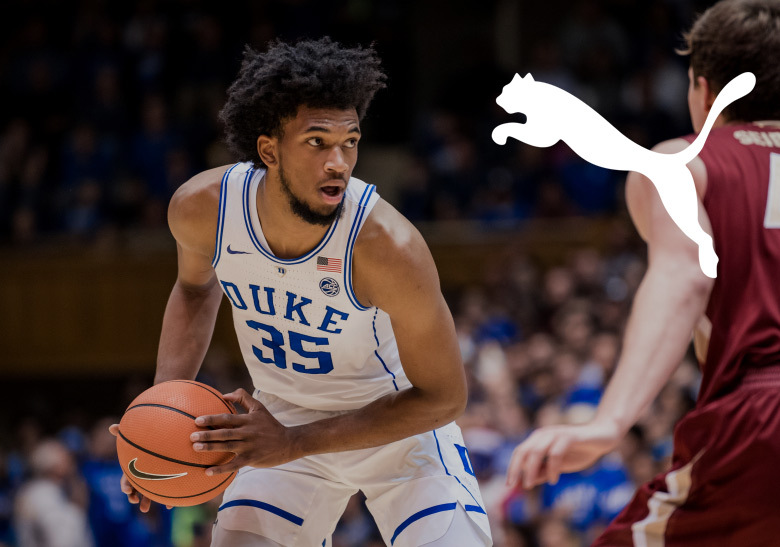 Duke product Marvin Bagley III is one of the top prospects in the 2018 NBA Draft. The athletic and tenacious power forward is a projected top 5 pick, and is the type of player that a franchise can potentially build a team around. But a team isn’t all you can build around a player of his caliber: Puma is banking on Bagley being the kind of talent that you can build a basketball shoe line around as well, as they’ve signed the 19-year old to the biggest rookie shoe deal since Kevin Durant signed with Nike in 2007.

Bagley’s 5-year deal is the centerpiece of the German brand’s plan to aggressively relaunch its basketball footwear business. Although they’ve been quiet on the basketball front recently, Puma has two things working in their favor that most other brands looking to enter the space don’t: a long and storied history—dating back to the late 1960s and the legendary Walt “Clyde” Frazier all the way up to Vince Carter in the early 00s—, and a solid worldwide footing that will enable them to have an extensive reach with their basketball business out of the gate.

Puma’s lifestyle line has recently enjoyed a surge of success, as they have a major celebrity in the hip-hop world as an endorser and other entertainers like Rihanna and her wildly successful Fenty Puma line, Big Sean, and Kylie Jenner under contract. However, as golfer Rickie Fowler—beloved for his loud orange outfits, but yet to win a major—is their most well-known endorser in North America, signing a talent like Bagley could very well do wonders for their athletic business. The brand is also looking to add additional rookies to their roster, and will reportedly be pursuing veteran players with shoe deals that are expiring this fall. Only time will tell if Puma can make inroads in the basketball market, but one thing is for certain: it’ll be interesting to watch both Bagley and Puma’s progress. Let us know what you think of Puma re-launching their basketball category, and be sure to check out our Sneaker Release Dates page for all your release info and updates.