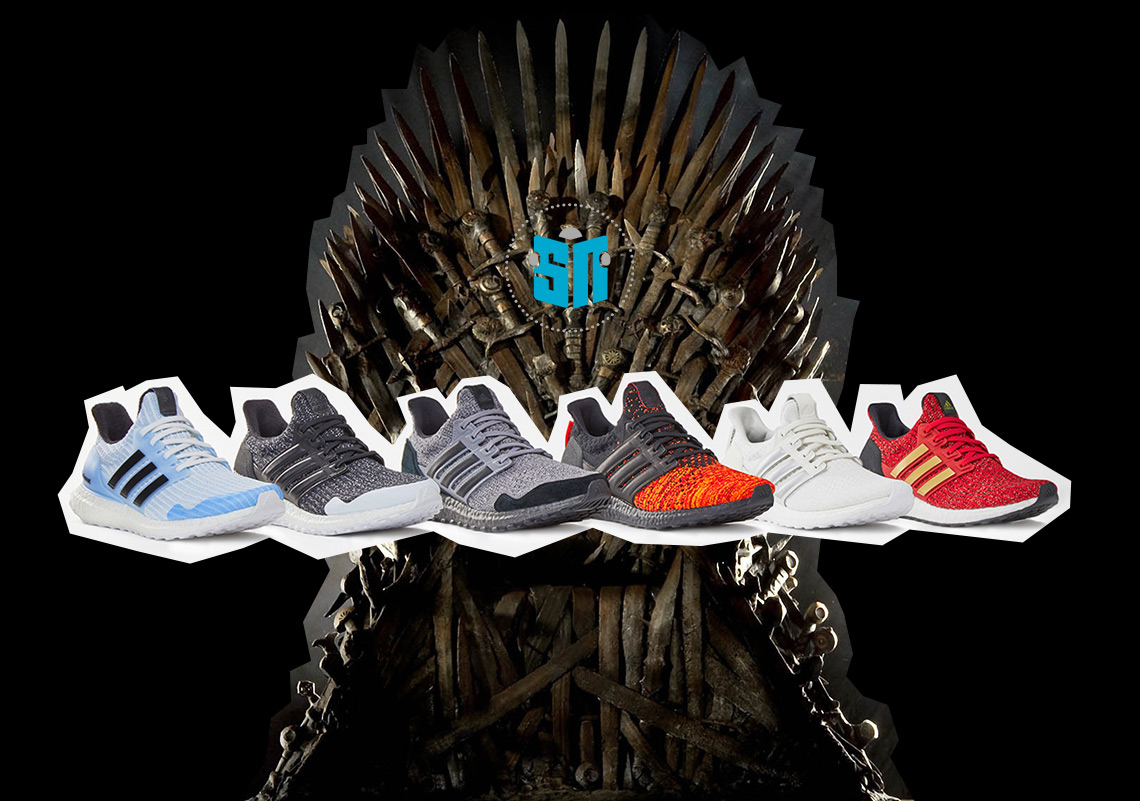 Ever since April 17th, 2011, Game Of Thrones has encapsulated HBO audiences with bloody fights, thrilling plot points, deep-rooted characters with rich back stories, NSFW love affairs, and more. In honor of one of the most popular series of all time’s final series premiering on April 14th of this year, adidas is releasing a six-piece Ultra Boost collection that comes inspired by six of the franchise’s most prominent factions. Each of the six iterations boasts a house or faction’s signature sigil or phrase, from the Lannister’s “Hear Me Roar” to the Stark’s “Winter Is Coming”. Dressed in color schemes and imagery that harken back to moments throughout the last eight years of GoT, the Three Stripes is looking to outfit their most loyal fans with a little piece of Thrones glory. Grab another look at all six Ultra Boosts below as well as a brief explanation behind each of their designs and be sure to check out our adidas Game Of Thrones Buyer’s Guide in advance of the collection’s official March 22nd drop. 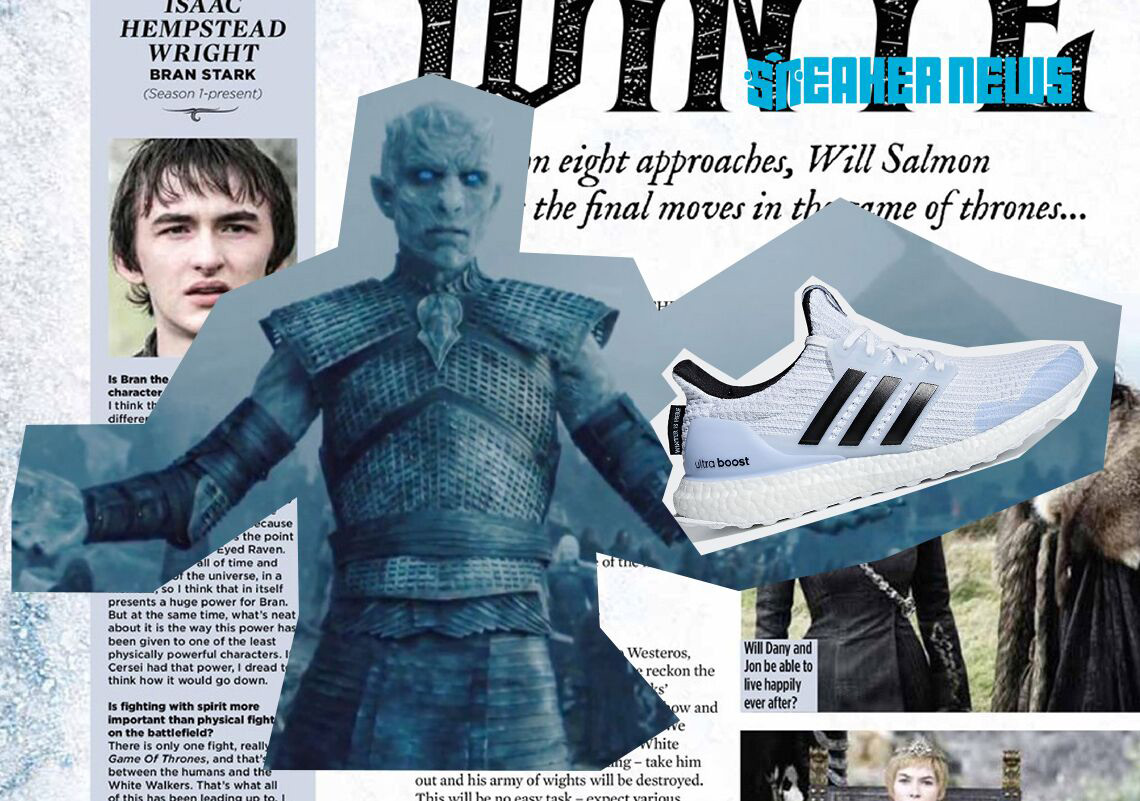 Serving as the key antagonists of the entire series, the White Walkers appear on an Ultra Boost fittingly adorned with a mixture of white and icy blue mirroring the Night King’s merciless heart. Winter has been coming for seven seasons, but as the heel tag proudly proclaims “Winter Is Here”, and the five other Ultra Boosts better band together if they have any intentions of haulting its arrival. 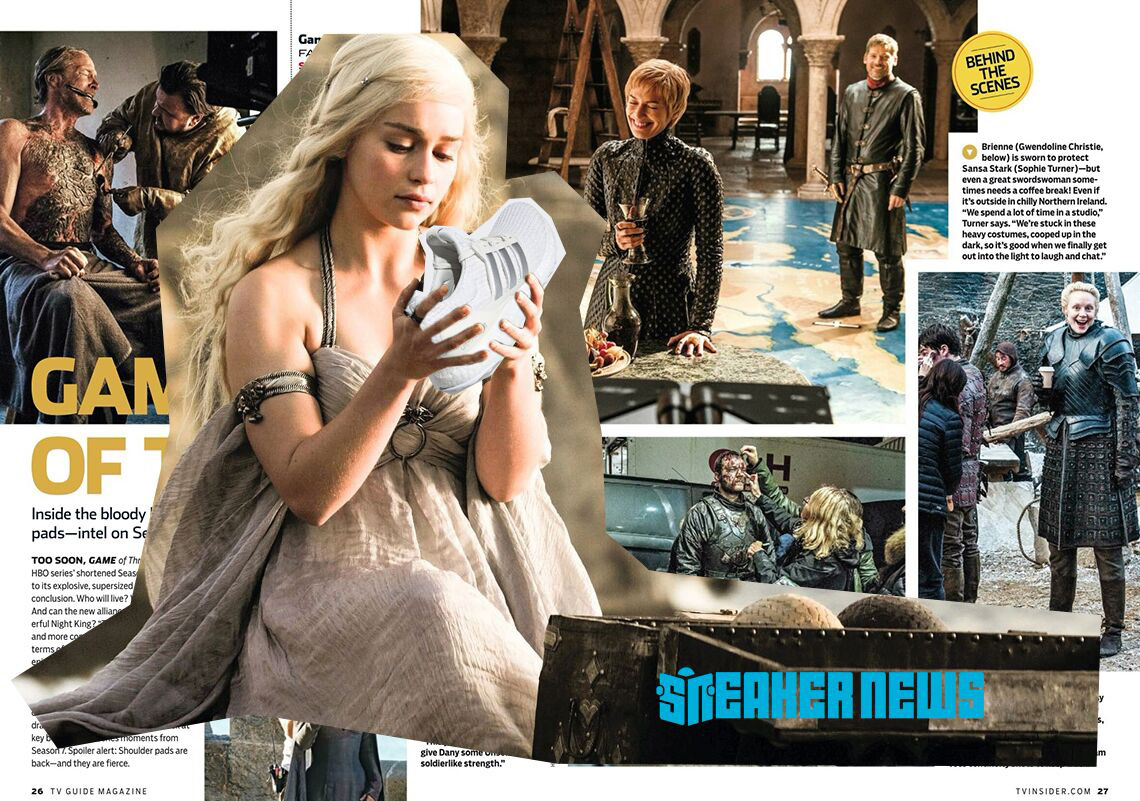 Draped in all white to represent this family’s silvery hair and pale skin, the former rulers of Valyria once laid claim to a ruling power as much any other house in its history. A dragon scale-textured leather tongue tag is a nice touch for this design as the once-noble house is synonymous with riding the scaly beasts. 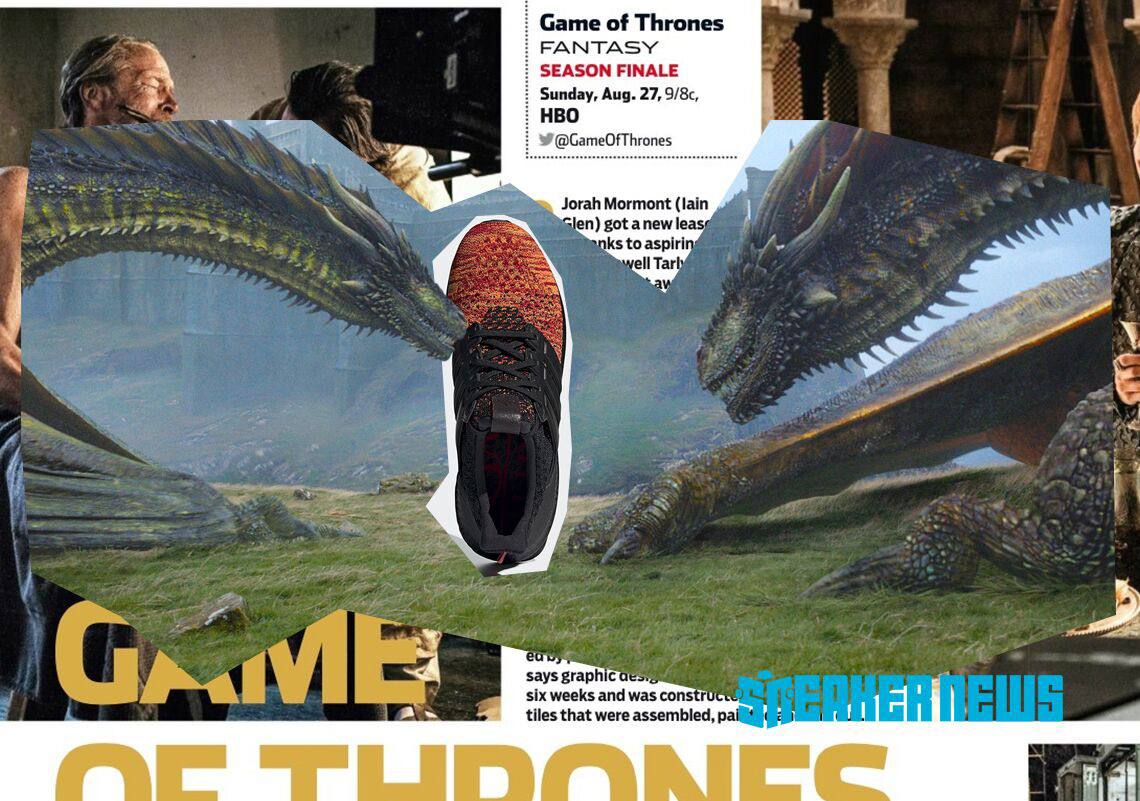 Fiery in its design, this Ultra Boost’s woven Primeknit upper mixes an array of reds, oranges, and yellows to convey the incredible might at the hand of Dany and her dragons. Borrowing the Targaryen’s house colors as the model’s anchor, its black Boost-laden sole, throat, and lace unit further portrays the menacing beast’s terror. 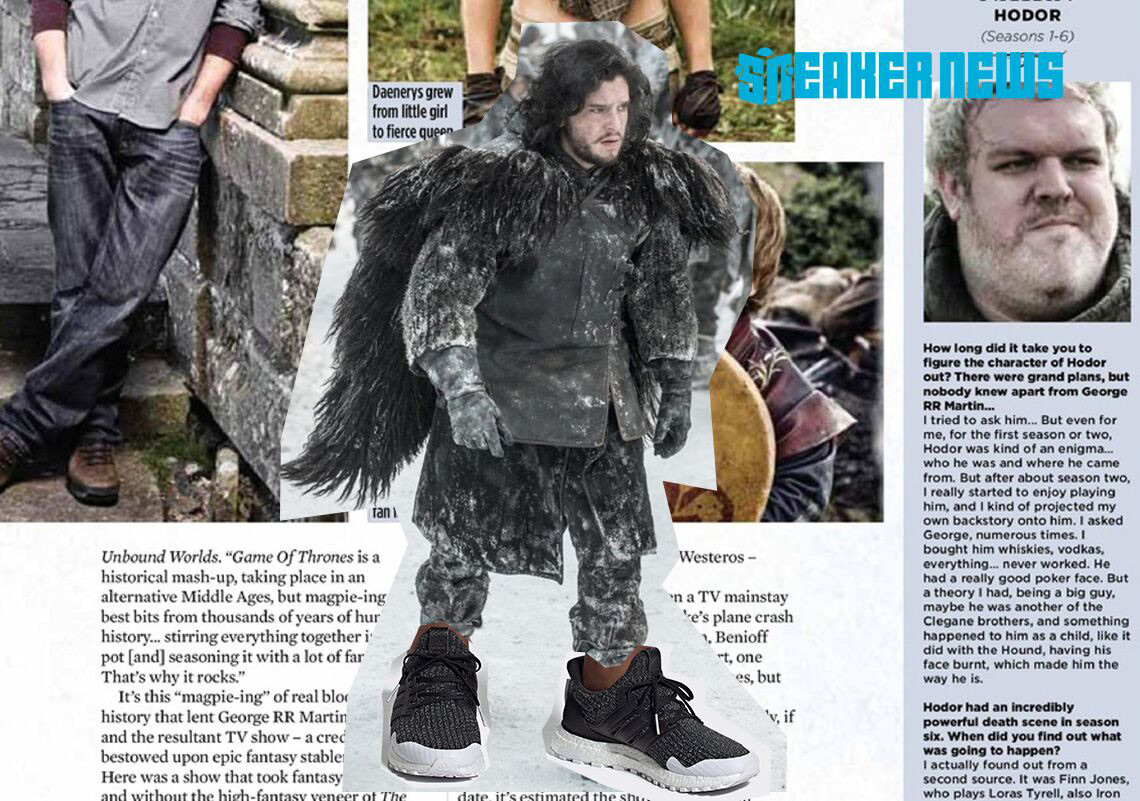 The Night’s Watch is made up of the Seven Kingdom’s outcasts, criminals, and drunks that have been banished to Castle Black to guard the nation from threats beyond the Wall. When one becomes a member of “The Watchers Beyond The Wall”, they “take the black” and honorably serve Westeros in large black overcoats to help fight off the endless winters plaguing the North. Mirroring the Watch’s fashion-forward garb is this Ultra Boost’s speckled Primeknit upper that mixes in some snowy white flakes along with a matching sole and toecap. 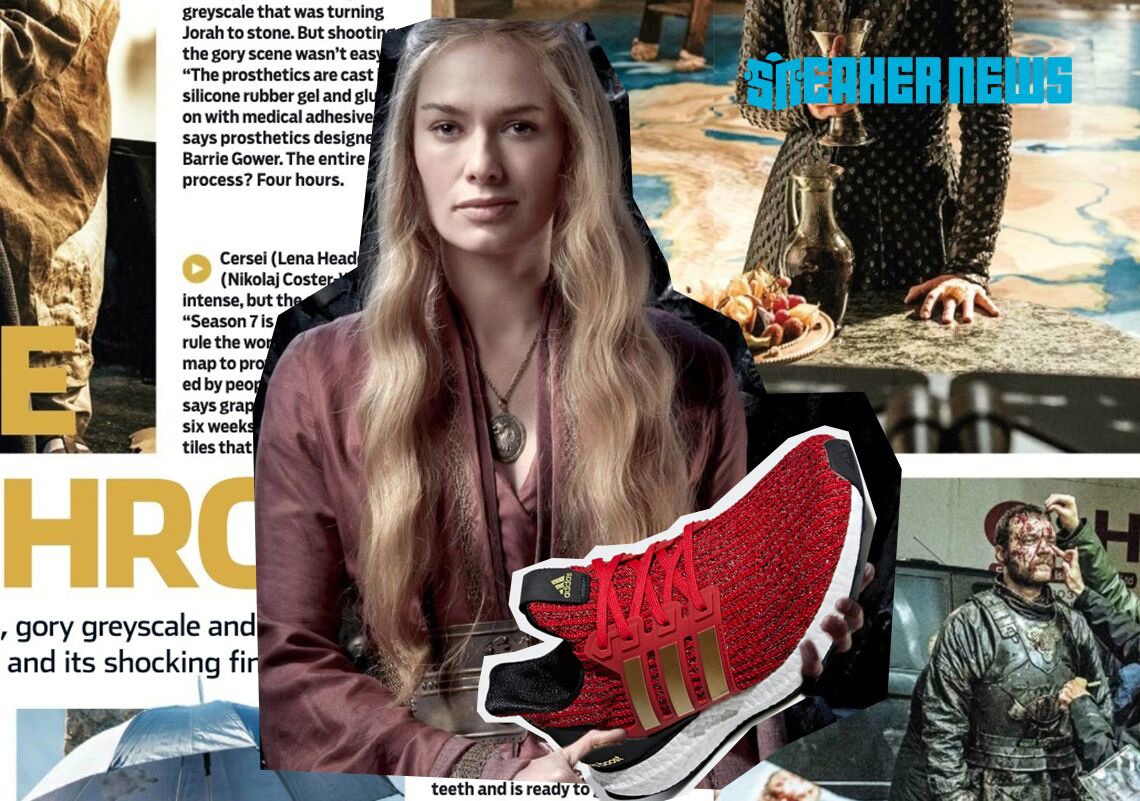 Equipped with the official “Hear Me Roar” sigil, the infamous house that calls the Red Keep home is much more famously known for always paying its debts – a state you will find yourself in if you try and secure all six pieces of this collaborative collection. A bit more similar to the Lannister’s from the series’ first few seasons, this regal crimson and red color scheme will not fade away as Westeros’ most infamous family continues to do. 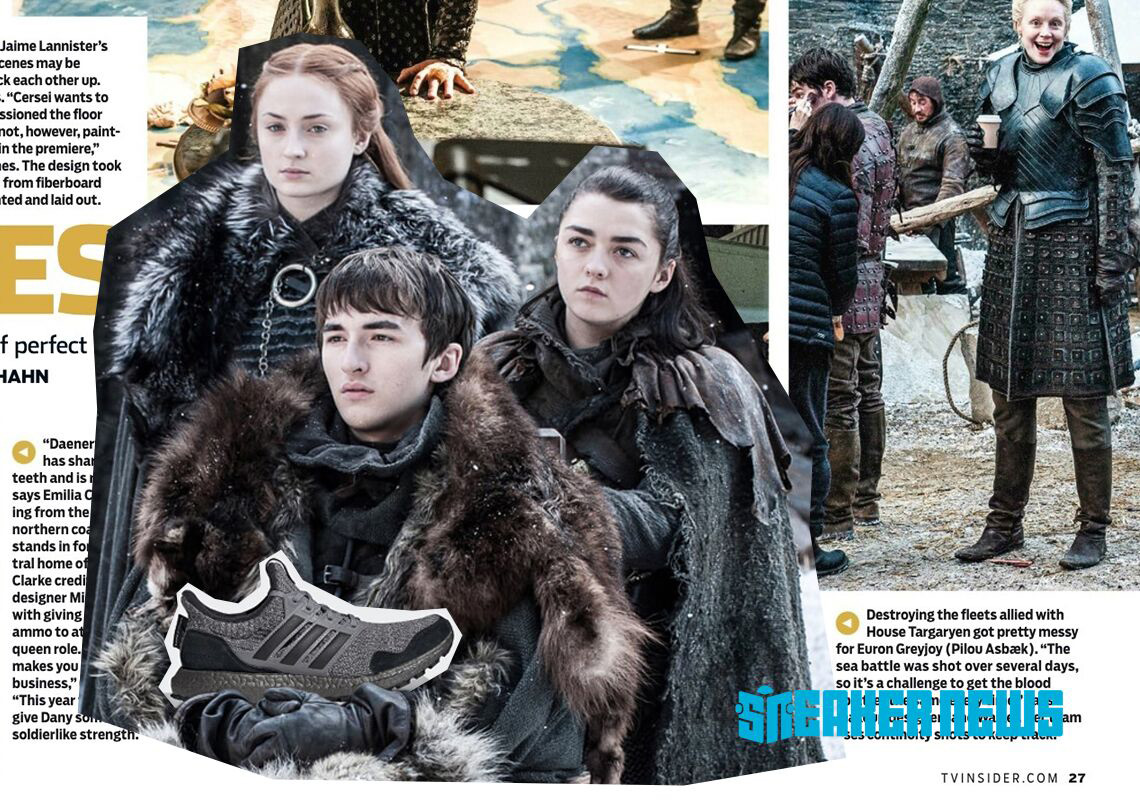 Like its black black and grey design, the rulers of Winterfell are not exactly the brightest house of the bunch as their seemingly endless string of bad decisions has nearly wiped them off the map. A fleece sockliner and a heavier tread applied to its outsole add a rugged, winter-ready look to the design as a nod to wardens of the north. Their direwolf sigil adds a ferocious twist to the inside of the Ultra Boost’s tongue while a suede toe-cap and heel cup resemble their premium robes.