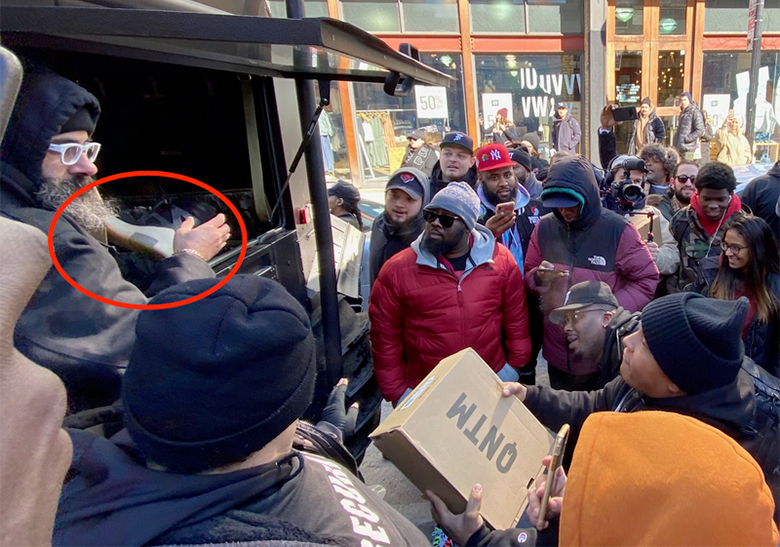 It’s obvious by now that the man behind the mysterious trucks rolling around the city of Chicago is none other than Kanye West. With All-Star Weekend taking place in the hometown of the YEEZY founder, we all expected a red-carpet rollout, but ‘Ye took to the streets to begin the launch of his next masterpiece – the YZY QNTM. Based on this video by TeamKanyeDaily, it appears that free pairs were given out through the back of these trucks in exchange for the shoes on feet, with the video showing two individuals giving up Air Fear Of God 1s for the pairs. Some individuals were denied the exchange as a used pair of Air Force 1s is clearly refused. adidas representatives have informed us that no exchange was necessary, but this video clearly shows otherwise. Check out the video ahead to see first-hand what went down, and remember – the adidas YZY QNTM officially releases on February 16th exclusively in Chicago.

In a call with adidas earlier today, we were informed once again that adidas did not initiate the exchange of shoes (which we mentioned in our original story). The trucks rolled up in front of Chicago sneaker boutique Saint Alfred, where Jerry Lorenzo’s Nike Air Fear Of God 1 pop-up was being held, and in a wild frenzy, consumers who were already there came forward and offered up their own shoes for the YZY QNTM. Individuals who were on location sent us video and statements affirming that the exchange seemed to be initiated by the trucks. But if eyewitness account was incorrect – if the exchange was indeed initiated by the two individuals – why would adidas accept the swap? Furthermore, there was no explanation why the individual with the Air Force 1s was denied.

In explanation of why someone would give up highly valuable Nike shoes (the Air Fear Of God 1 resell value ranges from $1,000-3,000), adidas representatives say “kids” regularly attempt outrageous actions to secure highly-coveted shoes – that a do-whatever-it-takes mentality is common. While somewhat true, instances of this nature are completely unprecedented. The two individuals are not kids – they’re fully grown adults. This leads us to believe that the entire episode was possibly staged by adidas Marketing in an effort to gain some buzz in front of a competing activation, and in that scenario, adidas would be correct in that the truck did not initiate the exchange. Other individuals have received free pairs as well as trucks rolled around the city of give the shoes away for free, but the activity in question is deserving of scrutiny.

On the flip side, if this whole ordeal was entirely organic and unplanned, the adidas truck should’ve never accepted the exchange in the first place, and they especially should not have rejected the other individual.

Kanye West and adidas gave out free pairs of the YZY QNTM on the streets, but individuals were forced to give up the shoes on their feet. It appears that they refused certain pairs (a used pair of Air Force 1s is clearly denied). Two pairs of the Nike Air Fear Of God 1 are clearly seen exchanging hands between the public and the persons inside the truck. What do you think about this guerilla style drop? Update: As we mentioned in our original story, adidas says the swap was not initiated by the individuals in the truck. That said, given the way the events went down, we’re under the impression that this “exchange” was entirely planted by the brand. Props to them for giving away the shoes to people in the streets in the first place, but this does not appear to be an organic event of any kind and is deserving of scrutiny.