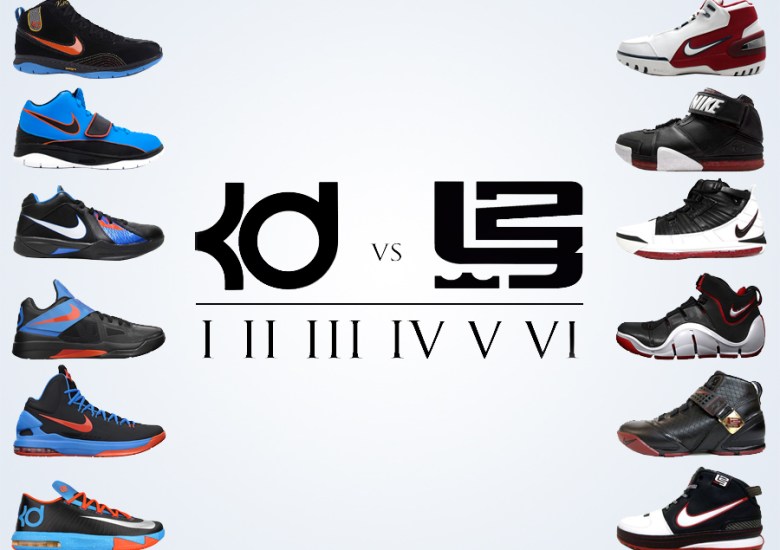 Comparing the Nike KD and LeBron Through The First Six Models 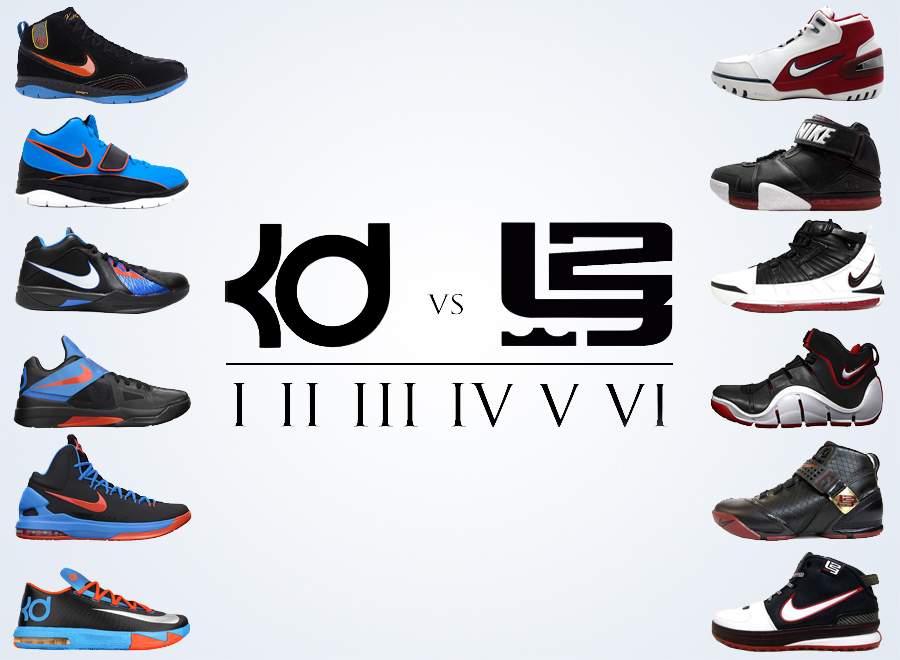 LeBron James and Kevin Durant and unquestionably 1a and 1b on Nike’s order of importance, but they took different routes to climb to their respective points of success. While LeBron James was a major focus on the marketing side of things, the Nike KD took a rather inconspicuous route with a bargain price-point and relatively quiet marketing push. Still, their resumes up to that point were eerily similar, and now that Durant and LeBron are ready to battle it for the true #1 spot of Nike signature shoes, let’s take a look back at the first six of Nike KD and LeBron.

One of the key contributors to a sneaker’s success is the brand’s involvement in pushing the product. As mentioned earlier, the KD line started off with small beginnings, while LeBron’s first appearance with Nike had him looking like a godly figure. It appears that there’s some level of advantage on King James’ side, but it’s clear that KD’s first sixth were far more successful and may potentially outgrow the LeBron line as the top dog. See our comparisons of each Nike signature installment below, and give us your thoughts on each match-up. 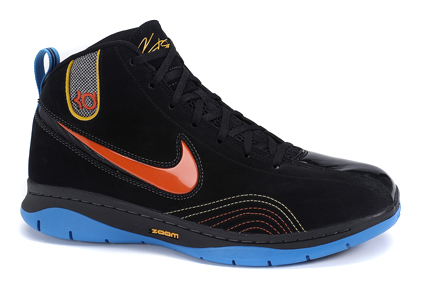 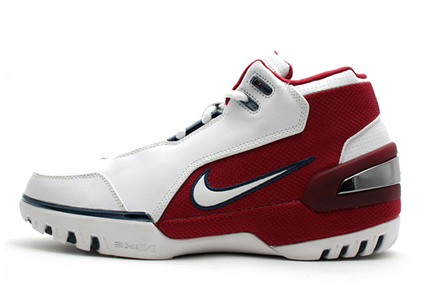 Notable Achievement: Rookie of the Year

Kevin Durant and Leo Chang – a match made in heaven? KD was the newest member of the exclusive Nike Basketball signature lineage, and Leo Chang was one of the brand’s most promising designers. KD wanted his shoe to be accessible and on everyone’s feet, so Nike went ahead with an unthinkable price-point of $88. The shoes officially released in early 2009, and despite the great colorways and low retail price, the KD1 wasn’t a major hit.

Notable Achievement: Rookie of the Year

Arguably the most significant business move for Nike Basketball in the 21st Century was signing LeBron James to a major deal – all before the #1 Overall Pick played a minute in the pros. For the debut of LeBron James’ signature line, three of Nike’s top-shelf designers convened to create the Hummer H2-inspired sneaker. Today, the Air Zoom Generation is a sought-after collectible, but the shoes only experience moderated sales when it first debuted over a decade ago.

VERDICT: Nike Air Zoom Generation – The hype was real, and fans were eagerly waiting for its release. Today, the AZG has been revived with LeBron himself rocking an OG pair recently, while the KD1 is well entrenched in the past. 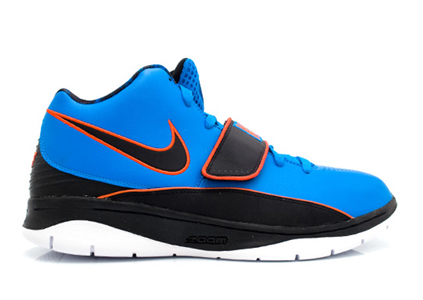 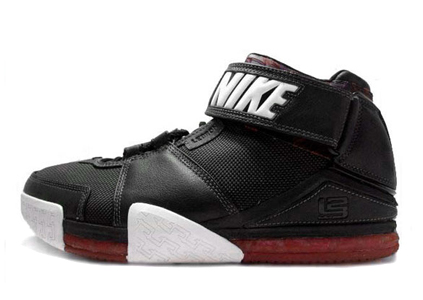 The sophomore model of the Zoom KD line was far more popular than the debut model. Again designed by Leo Chang, the KD II was actually cheaper as it retailed for $85. The KD II was a true coming-out party for KD, who in his third year in the NBA captured the NBA Scoring Title. This second model also debuted an icon of the KD signature series – the punchy “Creamsicle” colorway that continues to be a go-to inspiration for NIKEiD designs.

The LeBron torch passed to Nike design veteran Ken Link. Nike, a brand that continues to move forward to innovative materials and cushioning technology, introduced a basketball-specific large-volume Zoom Air unit encased in a Pebax shell. A removable ankle-strap as well as luxurious laser detailing (all the rave during that era) provided some unique touches to the beefed up shoe. Nike also introduced several limited-edition releases and samples like the “Chamber of Fear” and “Birthday”.

VERDICT: Nike Zoom LeBron II – The KD II was an impressive sophomore affair, but the LeBron II put a lot more on the table. 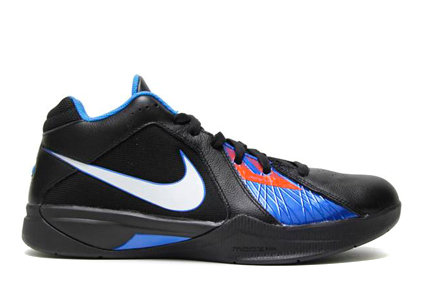 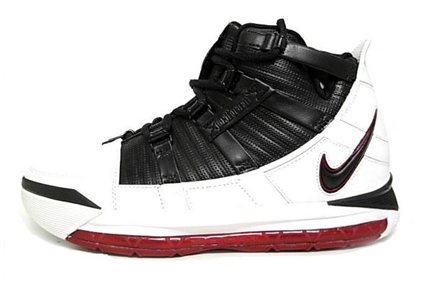 The Nike Zoom KD III showcased the “team” aspect that KD himself emphasized. The key insight from KD to Leo was “lightweight stability” and a multi-position fit for the shoe, with a focus on the forefoot to abide by Durant’s style of play. The Nike KD III was also the first KD shoe to hit NIKEiD, and since then the KD has been the best-selling sneaker on the online customizable platform. Some special editions like the “Scoring Title” and “Christmas” were the true highlights of the model, but still, the shoe didn’t grab global popularity.

The LeBron III was designed after an army boot to fit King James’ aggressive, soldier-like attitude toward the game. The release of the shoes coincided with Nike’s ad campaign called “The LeBrons”, which portrayed four different “LeBron” characters representing a particular character trait. Limited edition releases and figurines released in conjunction with the storyline, while more PE-style colorways were debuted as well.

VERDICT: Nike Zoom KD III – The matchup’s a bit interesting here: the KD was third on the rung, while the LeBron was the most important item on Nike’s to-do list. Still, the KD showed incredible promise while the LeBron III wasn’t much of a crowd-pleaser. 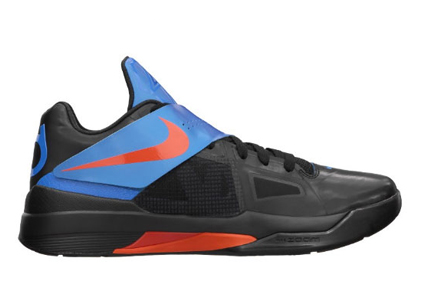 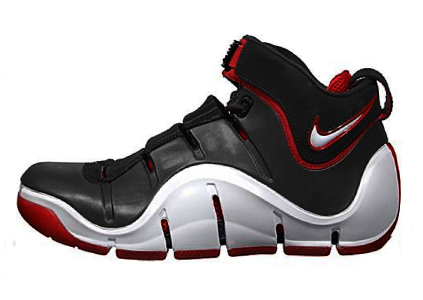 The IV was the true game-changer for the KD line. With an impressive debut of the Nerf and Weatherman colorways, the KD IV was one of the most sought-after shoes on the market, and the low $95 pricepoint had them flying off the shelves. The KD IV is perhaps the most influential of the entire series as it truly elevated the shoe to new heights while Durant himself went all the way to the NBA Finals.

Much like the KD IV, the LeBron IV debuted some of the most memorable colorways in Nike LeBron history. The “Fruity Pebbles” and “NYC Remix” releases are among some of the most heralded in history, and since then both versions have served as inspirations for future releases and models. Foamposite technology paired with a Zoom Air cushioning and bucket-like structure made the LeBron IV a top performer, although the heaviness was an issue.

VERDICT: Nike Zoom KD IV – This matchup of IVs is the closest of the bunch. While fanatics of Nike performance and technology love the LeBron IV for all the goodies packaged in the shoe, the KD IV was a game-changer for Nike Basketball as a whole. 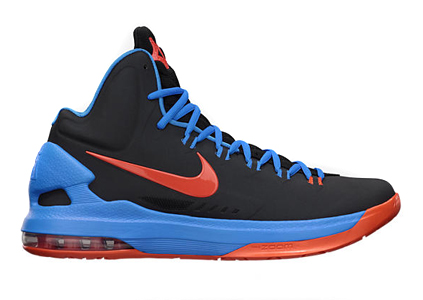 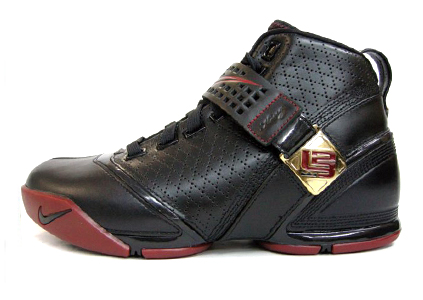 It’s tough to follow such a huge act like the KD IV, but the KD V held its own. Leo Chang brought in Max Air to the Nike KD line while opting for a super-high tongue and ankle cut for an obvious departure from the last model. The shoes hit major sales numbers and solidified KD as one of the most valuable assets to the brand. The KD V was also the first time it was featured in the Nike Elite series as well.

The LeBron V was an impressive shoe on paper, but overall, the sneaker was a bit of a disappointment. The shoe experience mediocre sales and LeBron himself opted for his Soldier model for the NBA Finals, but the LeBron V was indeed part of some House of Hoops exclusives that to this day, represent some of the most memorable of the collection.

VERDICT: Nike KD V – This one’s a no-brainer: KD’s arrival spelled out success for his shoe, while the LeBron V failed to impress consumers. 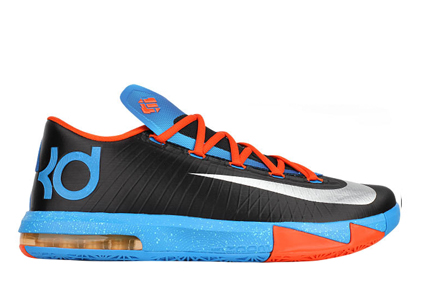 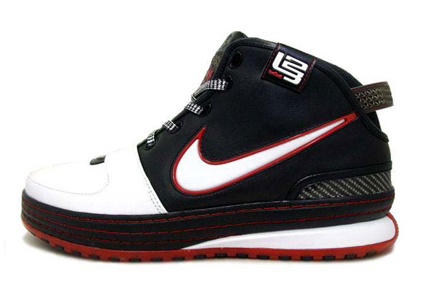 The Nike KD 6 was by far the most successful KD shoe to date. At $130 a pair ($150 for select versions), the KD 6 never experienced any signs of slowing down and nearly every shoe disappeared from stores. The high sales also project KD to inch closer to LeBron’s massive sales marks, and Nike expects KD to eventually take over as the most valuable asset on its basketball roster.

Rumor has it that LeBron James was not happy with the original design for the LeBron VI, so Link and crew went back to the drawing board to create this version here. The sneaker had classic details to it, like the stitched midsole and the AF1-like toe-box, but like its previous models, the LeBron VI struggled at retail and was never the mainstream hit like LeBrons are today.

VERDICT: Nike KD 6 – While the LeBron VI has its fair share of obstacles (LeBron being unhappy with the original design, the shoe being closer to a boot than a basketball shoe), the KD 6 became a top priority for Nike brass.