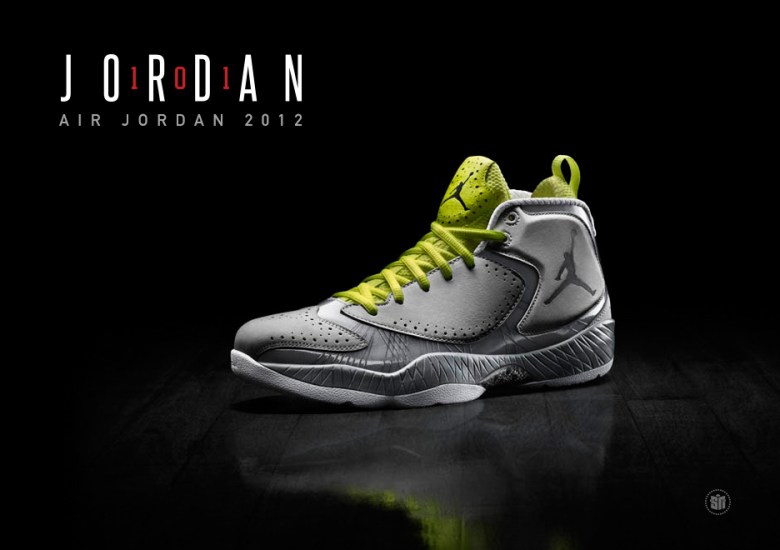 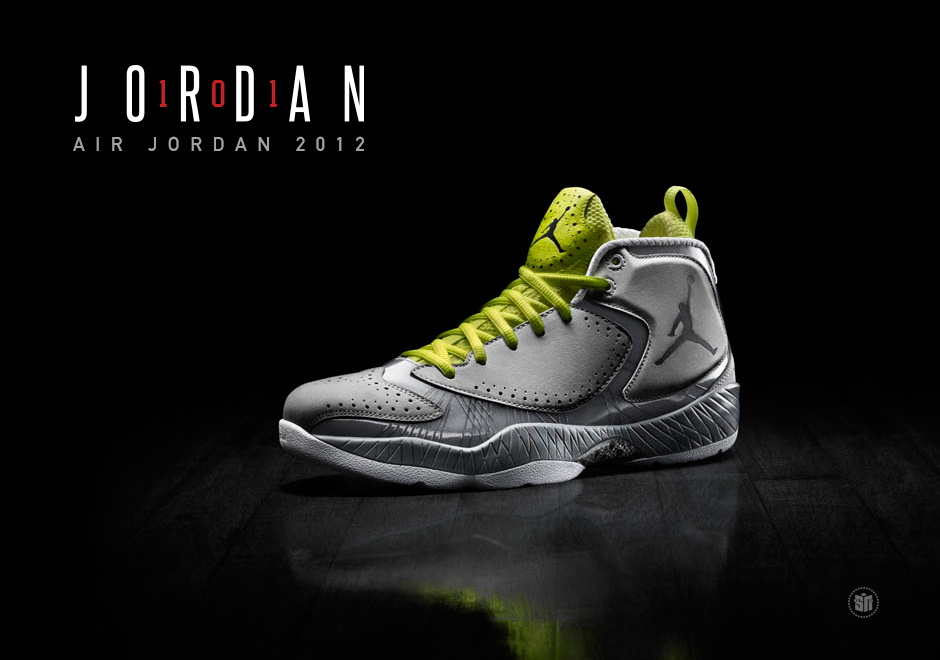 When the Air Jordan 2012 broke onto the scene, it was an immediate attention grabber not for its looks, how limited it was, what celebrity was spotted wearing it, or any of the usual hype-generating reasons. No, this time around, the Air Jordan was raising eyebrows strictly because of its unique performance: the never before seen system of fully customizable support and cushioning. For this week’s edition of Jordan 101, we’ll get you educated on the Air Jordan 2012, the first shoe to let you “Choose Your Flight”. 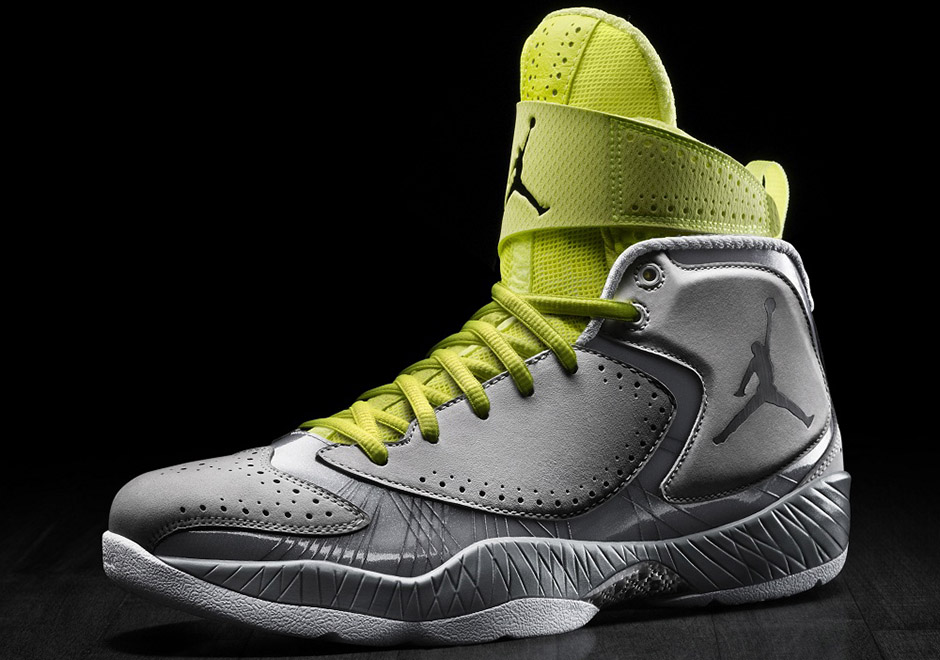 The Air Jordan 2012 released on February 8th, 2012 with the full set of inner sleeves and midsoles in the ‘Wolf Grey/Volt’ and ‘University Blue’ colorways for $223, followed by individual options later in the month in ‘White/Black’ and “Year of the Dragon” versions for $180. A number of additional colorways followed the initial February drops, along with a “Lite” construction of the shoe released later in the year. Also worth noting, the Air Jordan 2012 was the last of four game shoes (beginning with the Air Jordan 2009) to have its name designated by the year it released, as the 2013 model went back to “XX8”. 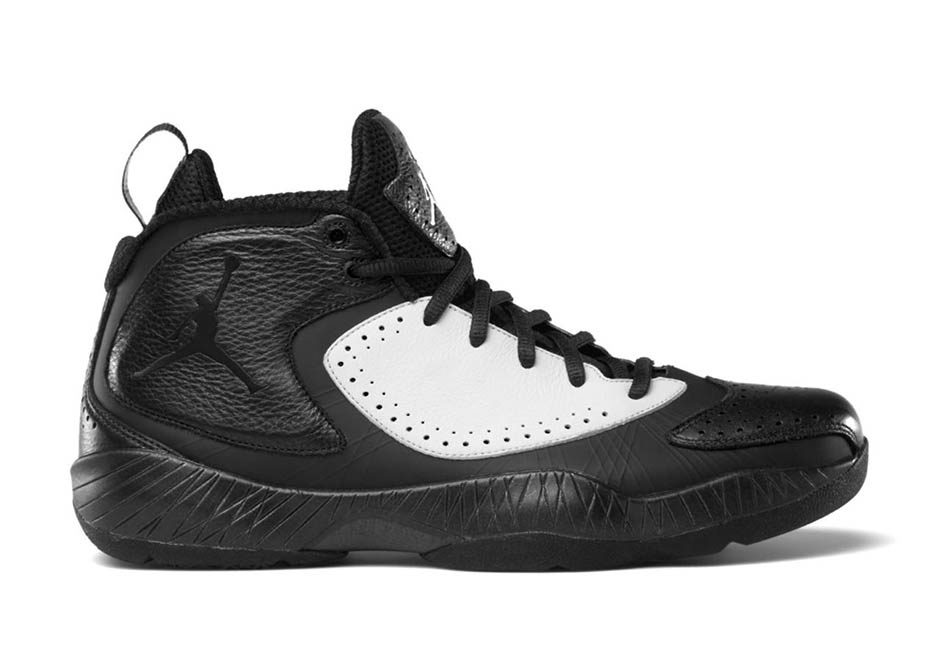 The design of the Air Jordan 2012 was a joint effort between Tom Luedecke and Tinker Hatfield, who had also previously teamed up on the Air Jordan 2011 a year before. As with every Air Jordan model, the design aimed to marry high-performance with luxurious style. Tinker was inspired by the zoot suits and flashy wingtip dress shoes popular in jazz circles of the 1930s and ‘40s, which is translated quite obviously on the shapes and perforation designs of the leather paneling. The most notable aspect of the 2012 would be the expansion of the customizable cushioning platforms of the Air Jordan 2011 into even more performance choices, which we’ll get to next… 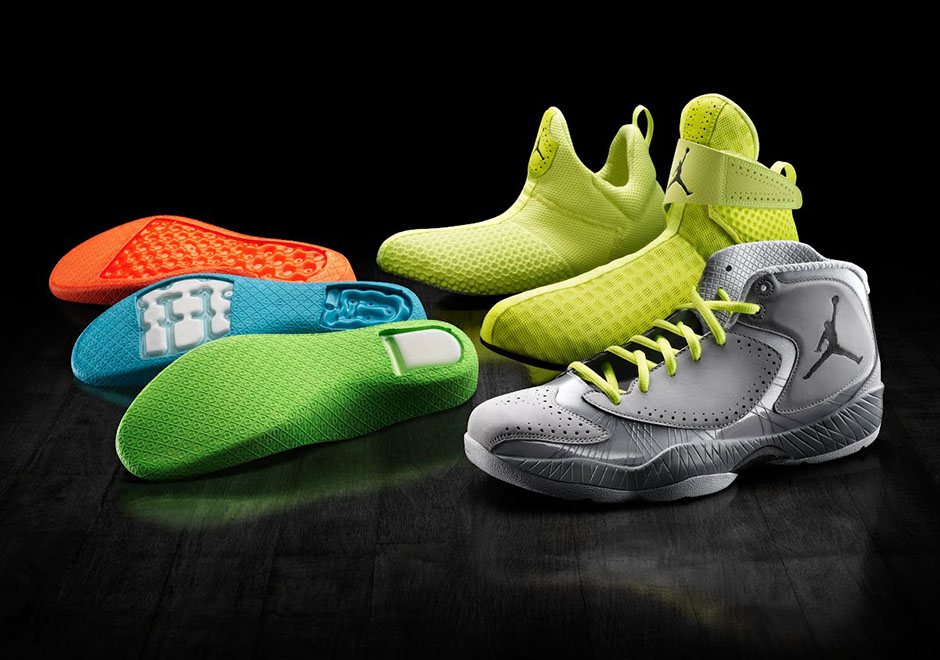 The most customizable performance sneaker ever, the Air Jordan 2012 features a total of six different combinations of cushioning and support. Included in the deluxe package are two inner bootie sleeves with a normal height or an extra high cut with a velcro strap for added support, along with three interchangeable midsoles: “Fly Through” with a full-length encapsulated Air sole; “Fly Over” with Zoom Air in the forefoot and encapsulated Air in the heel; and “Fly Around” with Zoom Air in the heel. The ambitious customization system ensured each wearer would get the exact combination of support and cushioning needed to match their game, but critics felt the intricate system also made the shoe a little confusing. 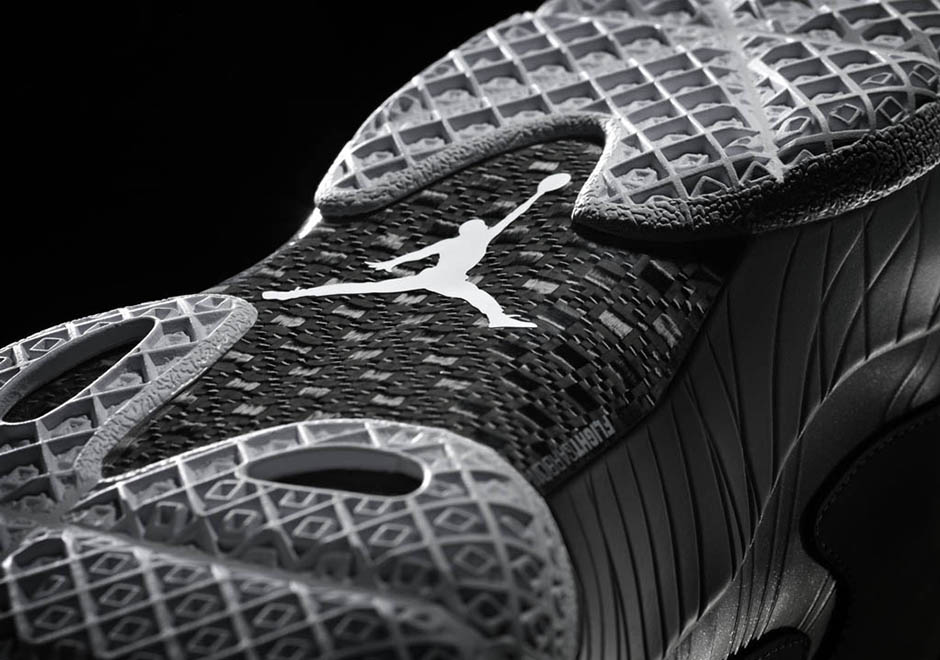 Along with the customizable cushioning and support, the Air Jordan 2012 also features a number of other tech aspects, including a Flight Carbon Plate—a supportive composite fiber glass and carbon fiber shank contoured to the natural shape of the foot—a phylon outer midsole for lightweight cushioning, and a synthetic base underneath the full-grain leather or nubuck overlays equipped with Flywire support. 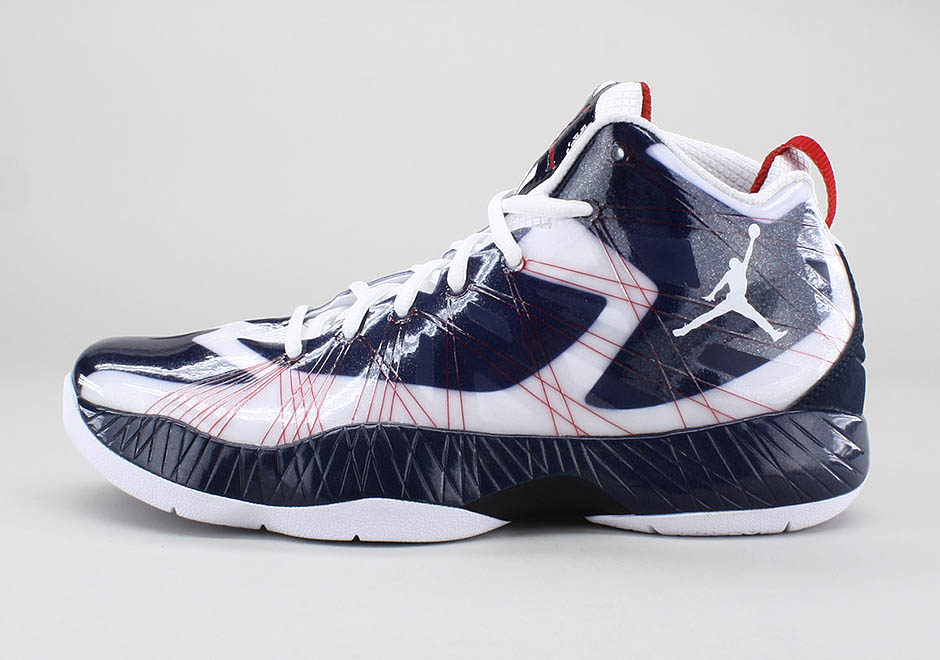 The Air Jordan 2012 Sheds Some Weight

Expanding your options for the shoe even further, after the initial run of the standard Air Jordan 2012, Jordan Brand stripped the shoe down to its essentials for the “Lite” version. The Air Jordan 2012 Lite featured no leather paneling, opting for a fully synthetic upper. It also dropped all the customizable midsoles and booties for only one option of full-length encapsulated Air and a mid cut. 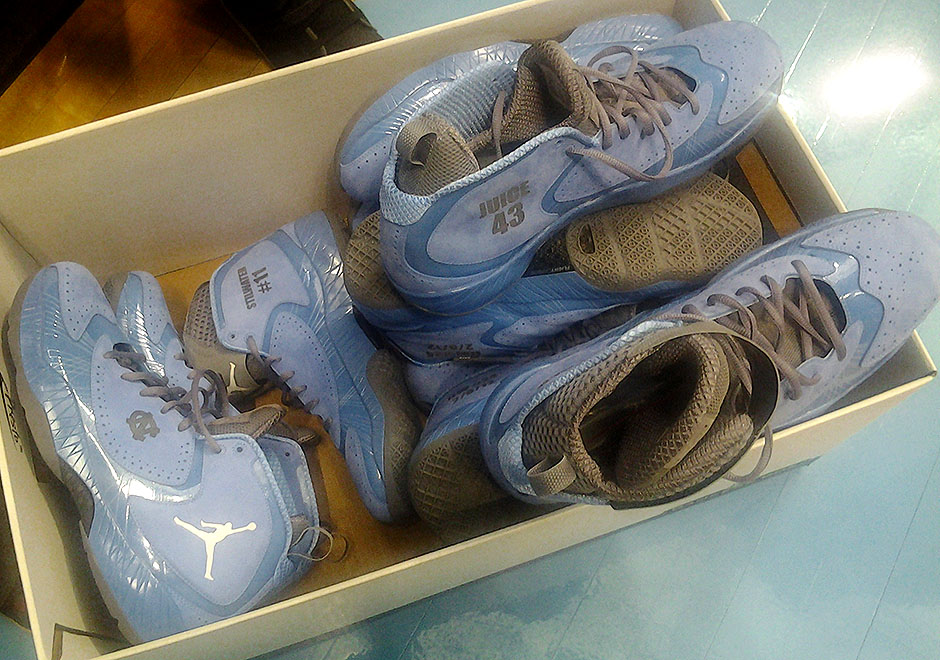 Despite Jordan Brand having a full roster of NBA players, the Air Jordan 2012 didn’t seem to show up much in PE form on the court. As usual, Ray Allen was the most notable player to have his own colorway in Boston Celtics home and away editions, while Josh Howard and Mike Bibby were also seen in their own pairs. Meanwhile in the college ranks, North Carolina were prominent wearers of the shoe in school colors, while other Jordan-sponsored schools like Cal, Marquette, and Georgetown also received exclusive editions. Also the official shoe for the 2012 Jordan Brand Classic high school game, PE colorways for each team were actually released at retail in limited supply. 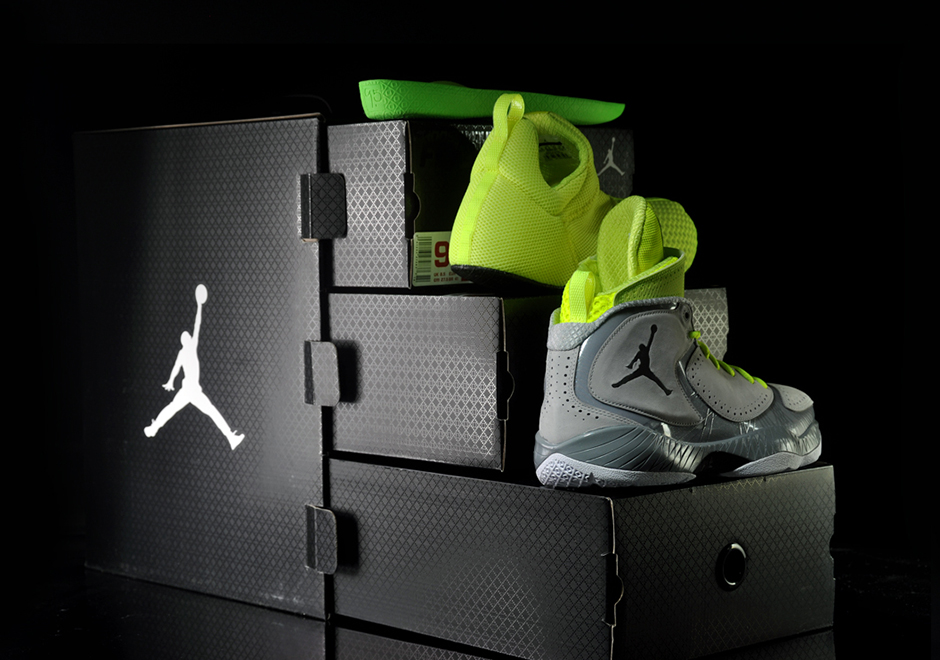 Performance Wins Out Over Style, This Time

The yearly official Air Jordan game shoe has been characterized throughout the time by its unmatched blend of performance and unique, luxurious style. However, when it was all said and done with the Air Jordan 2012, the performance end of things seemed to win out over the style, due to the somewhat lackluster look that didn’t quite match up with its innovative customizable performance. It will surely never be known as one of the best looking Air Jordan models ever, but you also can’t blame Tinker and the Jordan Brand crew for trying something new and ambitious.