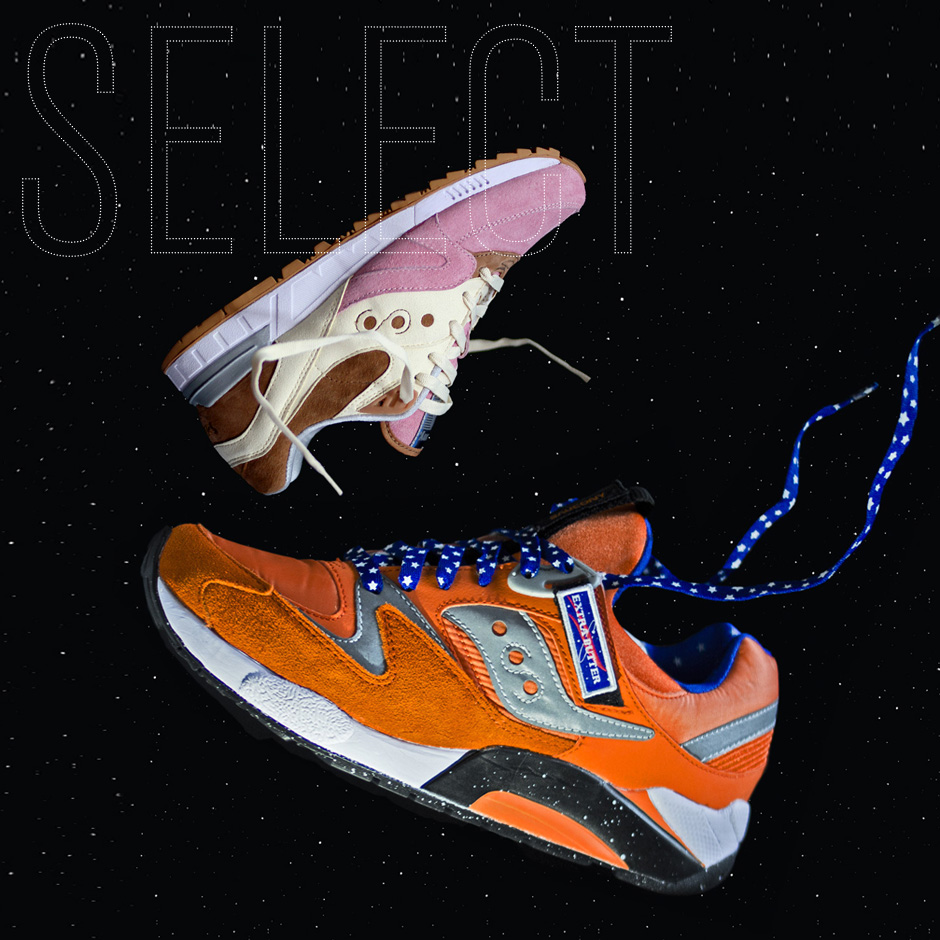 Extra Butter has long been known for their affinity for cinema and have never been shy about embracing the theme, whether it’s the decorative visual motifs of their two storefront locations or the various in-house design projects they’ve produced over the years. Now, parallel to their reverence for the art of film making, the EB crew is out to flex their own creative prowess and direct some cinematic visions of their own.

After paying homage to Men in Tights with Reebok and taking on an ambitious five-shoe ASICS capsule inspired by Kill Bill, Extra Butter has shifted gears and woven together an epic narrative of their own. Dubbed the “Space Race” pack, their upcoming trio of Saucony runners will begin hitting the launch pad next week starting with the “ACES” Grid 9000.

The “Space Snack” Shadow Master will follow shortly after with a mystery third shoe lined up for the grand finale. Extra Butter gave a small taste of the Round 1 offering last week by way of a cool teaser video, and now they’ve given SN SELECT an exclusive first look at the first two-thirds of their outerspace-inspired Saucony collection.

We caught up with Extra Butter’s own Jason Faustino to get the inside story on the shop’s “Space Race” project and more, so continue on for the full interview and get your first good view of the Grid 9000 and Shadow Master. The “ACES” Grid 9000 will hit the Orchard St. store on Thursday, 4/24, the Merrick Road location on Saturday, 4/26, and the Extra Butter online shop on Monday, 4/28. Stay tuned to EB for release specifics on the second and third installments coming soon. 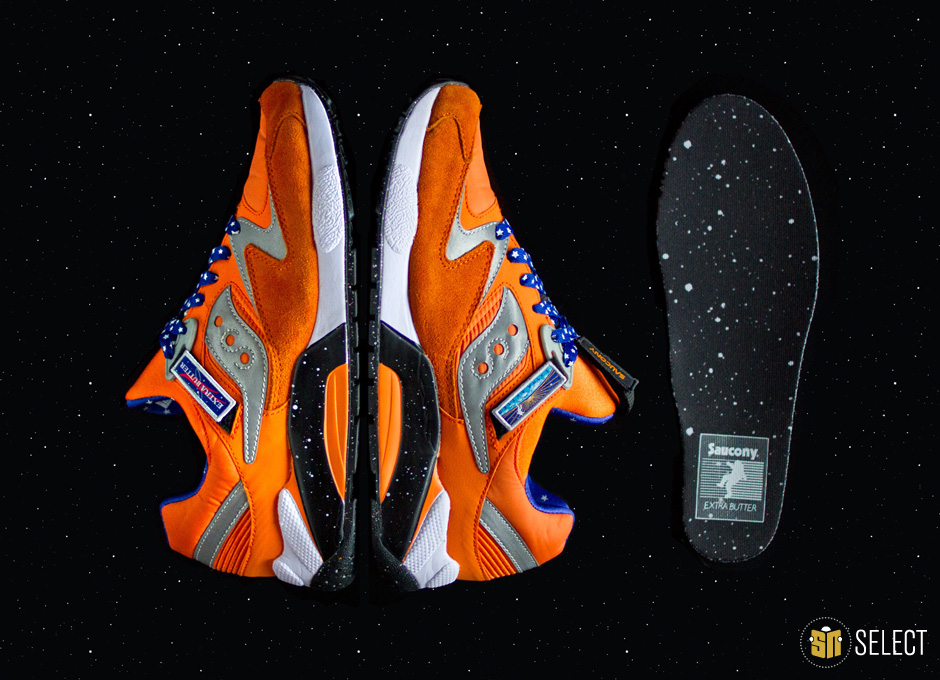 SN:  How did you guys arrive at the “Space Race” theme for your Saucony collaboration project?

Jason:  We arrived at this theme a long time ago. Bernie found this info gem about Saucony, as Hyde Footwear in the 1960’s and having created the first ever boots for a space walk worn by an American astronaut. Initially Bernie went with a galaxy themed concept just months before the whole “galaxy” craze began a few years ago, so we decided to take a different route. We felt we could show our theme’s cultural significance, as well as create from a nostalgic position we knew would be fun for everyone involved.

SN:  Unlike your previous collaborations, this project doesn’t have a movie theme. What made it the right time to switch-up from your established formula?

Jason:  That established formula has become our solid foundation. We love that we have the ability to revisit that, as it is a strength and something that we feel is proprietary at this point. The switch was made due to the overwhelming affinity for the concept, and how well we felt we could tell the story through our marketing.  We also feel we posses an arsenal of weapons to play with when it comes to executing a project. Film will always be part of our core, but like we mentioned in our last SN Select feature, there are a lot of things our team is into, and we’re not afraid to take it there. After all, “butter” is slang for premium and anything dialed up done better than the rest, so we won’t limit ourselves to just movies. 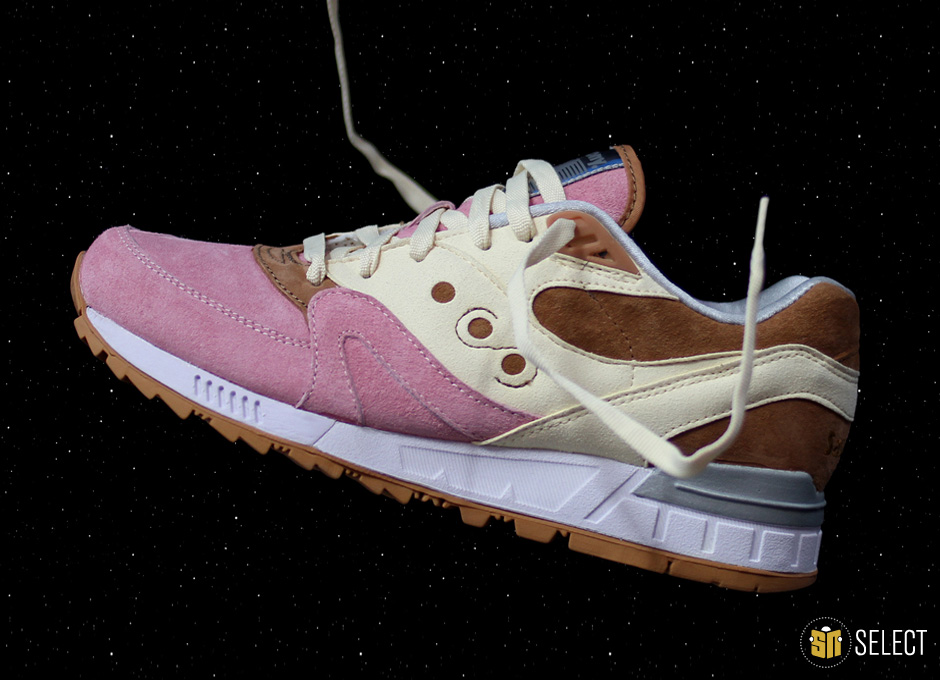 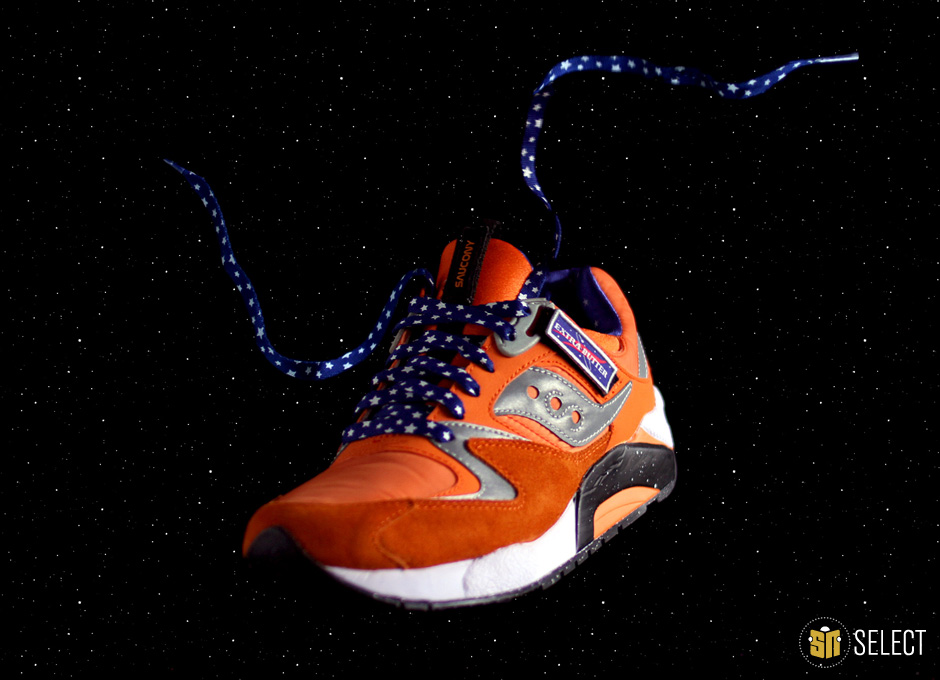 SN:  What’s the story behind your Grid 9000 and the colors and materials that were used on it?

Jason:  The Advanced Crew Escape Suit are those cool orange full pressure suits worn by the astronauts during the space shuttle’s ascent. Nicknamed, the “ACES”, we loved the idea of working with orange nylon to mimic the actual suits. We also used orange suede to give the shoe some extra texture and 3M reflective to pop little

pieces on the upper, as well as Saucony’s river logo.  We created embroidered velcro patches as a signature aesthetic of these entry suits and added a patriotic ode to our country’s efforts during the space race era with the star print laces and comfort lining. 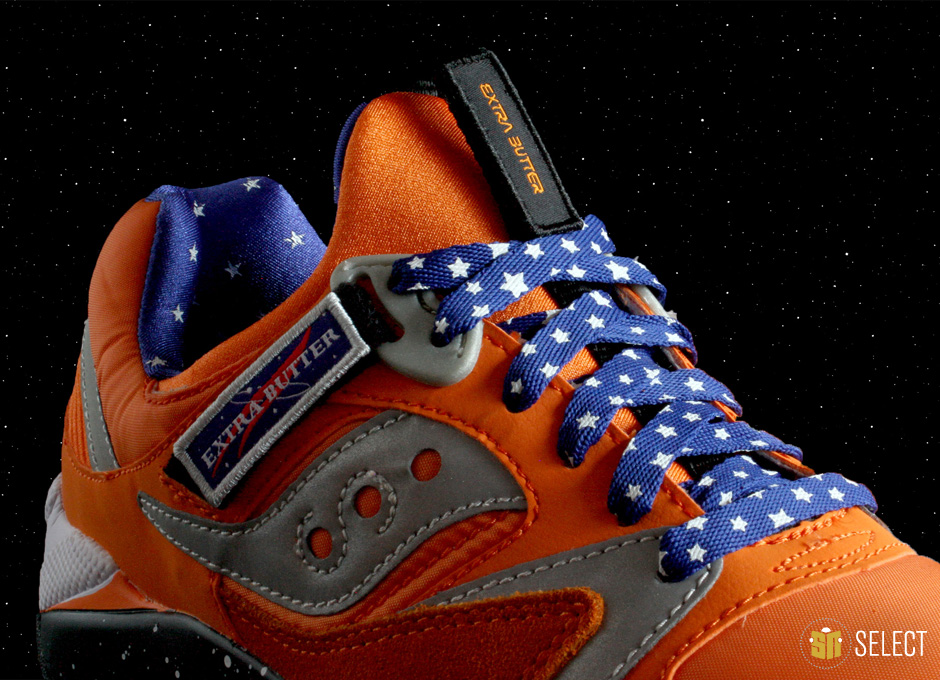 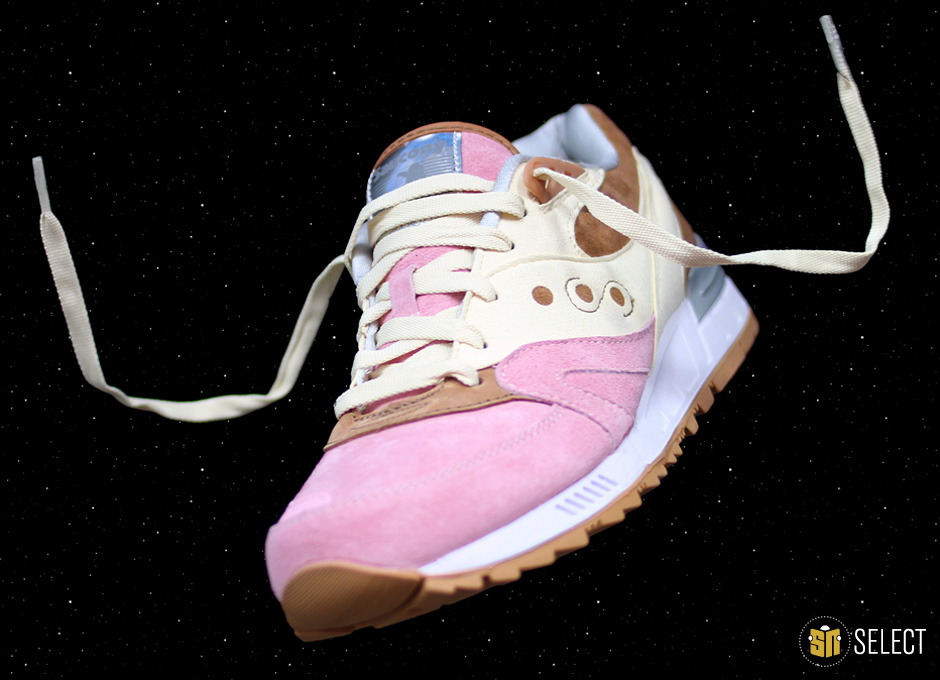 SN:  And for the Shadow Master?

Jason:  After working on the other designs, Dan, Bernie, and I were at a coffee shop getting really excited about how this project was taking shape. We felt we were touching on the historic connection between Saucony and space travel, as well as the overall magnitude of outer space exploration. Many people discover their fascination for space at a young age. Our stories highlighted visiting the planetarium as a kid, and the unforgettable experience of getting space ice cream at the gift shop. I’m sure many people reading this share a similar memory.

One of our manager’s Alex once said, “sneakers are moments”, and that resonates with us significantly. There are a lot of amazing sneakers out there, but we think the greater products possess feeling. The “Space Snack” is exactly that. The few people who

have seen it immediately smile and reflect on how enjoyable of a treat it is, or the precious moment when they first tried it. While we spent time conversing about the fun of this concept, Bernie…the beast that he is, already mocked up a design we immediately fell in love with.

We felt the color blocking was done with purpose, and the premium suede was a must for the way it took color and created the chalky appearance and texture of space ice cream. A metallic silver branded tongue tag featuring our “Float Man” logo, and heel piece represent the ice cream’s silver sealed packaging while taking the design one step further in terms of being true to concept, and advanced in design. 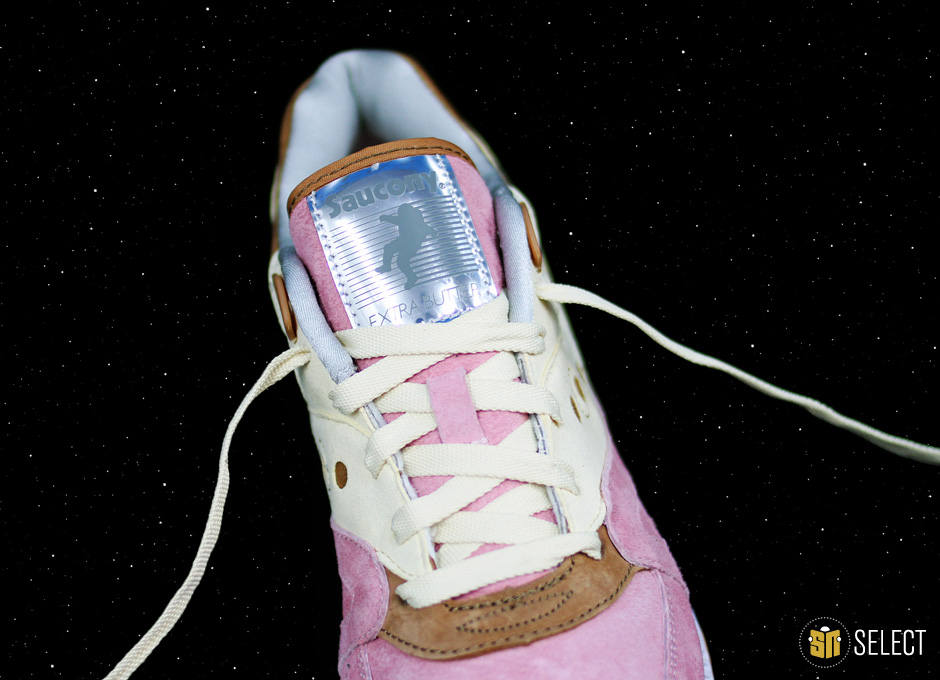 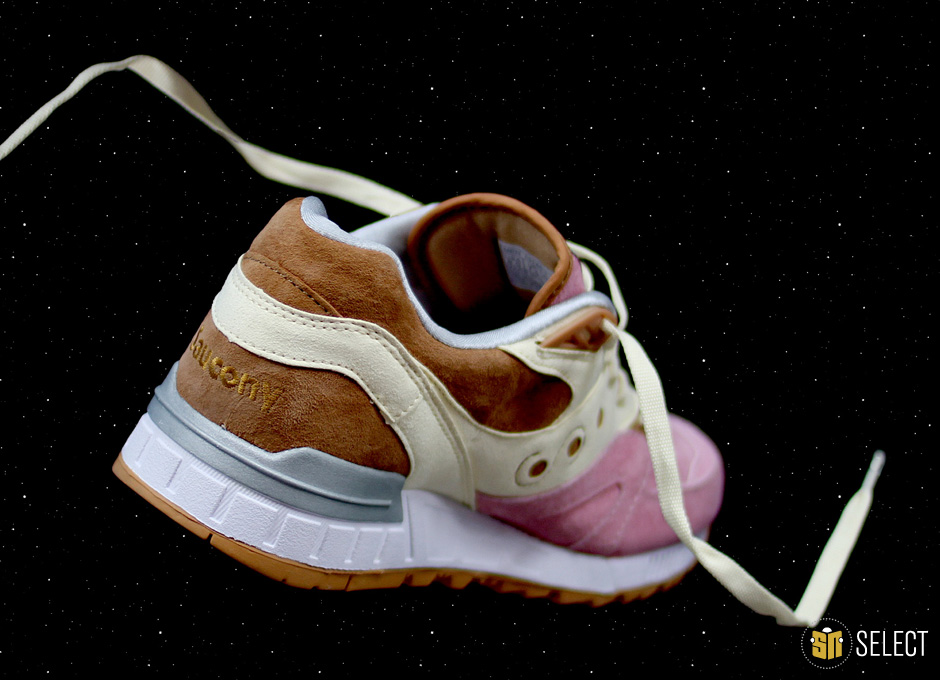 SN:  You guys just did a five shoe capsule with ASICS and now this Saucony trio. What are some of the challenges of doing a multiple shoe pack?

Jason:  There are always challenges in terms of the overall logistics when it comes to projects with bigger scope. Our whole organization welcomes these challenges and learns from the “growing pains”. I think we gravitate naturally to the capsule approach because we’re attracted to the depth of a concept. When we explore an idea, I feel we leave no stone unturned. The result is often many different ideas that we often have to strip down, which I guess would be the biggest challenge, but one we deem necessary. The multiple layers in our projects provide an actual experience, and we feel it’s important in our fast paced world where many things end up ephemeral.

SN:  Saucony has been building some nice momentum in recent years. What changes have you noticed in the way your customers view the brand?

Jason:  Honestly, it feels like our customers passion for Saucony has always been there. The brand puts out great, quality product people have taken note of for some time. Couple that with the outstanding work Bodega did with their releases and the Elite program, the bringing back of the now beloved Grid 9000, and all the creative projects coming from other retailers and brands. The customers are thrilled the brand has arrived at this point, but the affection has always been there. 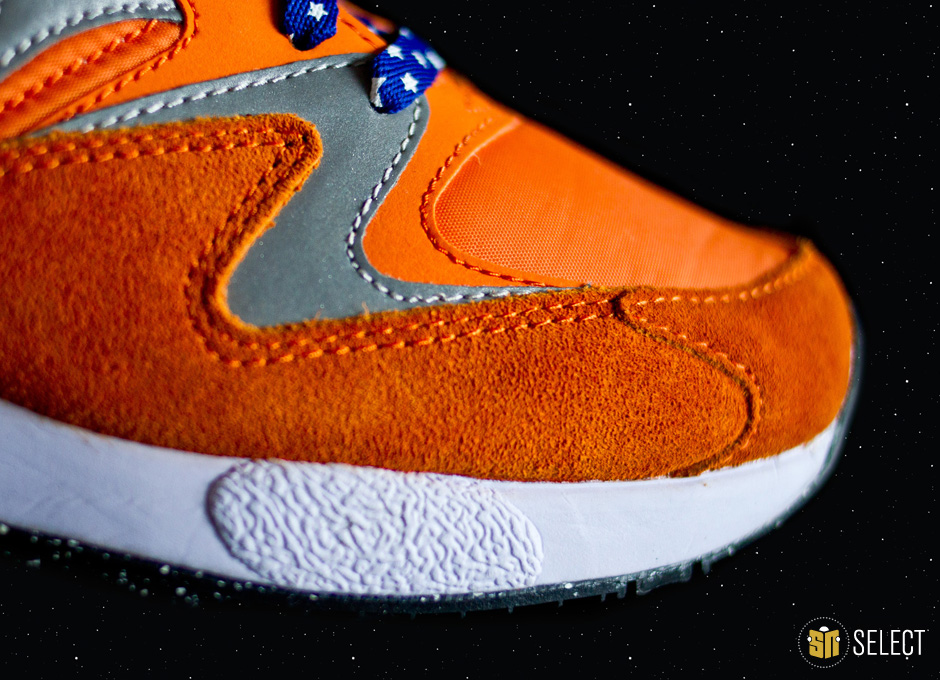 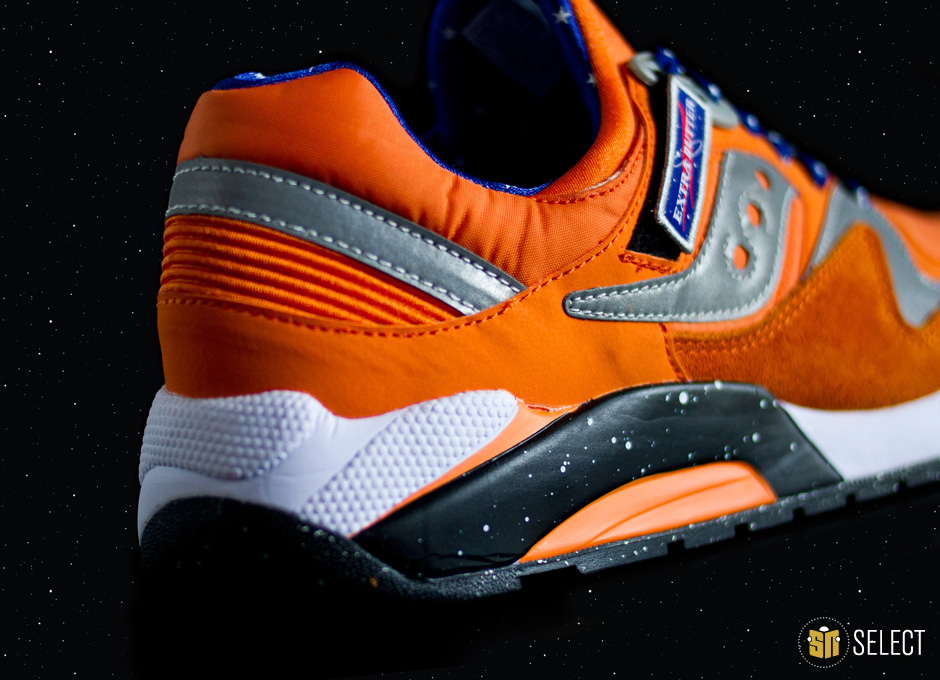 SN:  Now that you guys have done a number of Extra Butter shoes, what’s been the most enjoyable part of the overall collab experience: creating the shoes or the release and customer response?

Jason:  I would have to say neither. Although both of those aspects are incredibly enjoyable. What we go through as a team, putting our energy and efforts into these projects means everything to us. The experience of sharing the project presentation with one another, receiving the samples, unveiling the video, running around during our release events, the excitement of our online release, the tweets that pour in, and even having our hands full with the shipping process. Those times are unparalleled. Lucky is a gross understatement to describe how much fun it is to go crazy and celebrate these moments together…by far the most enjoyable parts of the process.

SN:  Can you tell us anything about the mysterious third shoe in the pack?

Jason:  I can tell you that it will be exclusive to us and only sold at our in-store and online releases. The rest is classified information, as well as other surprises along the way. You’ll have to keep on mission with our Space Race to find out!

We also want to thank SneakerNews for this opportunity, as well as Mike and Eddie from Saucony for being such pros at what they do and for being all around awesome people to work with! 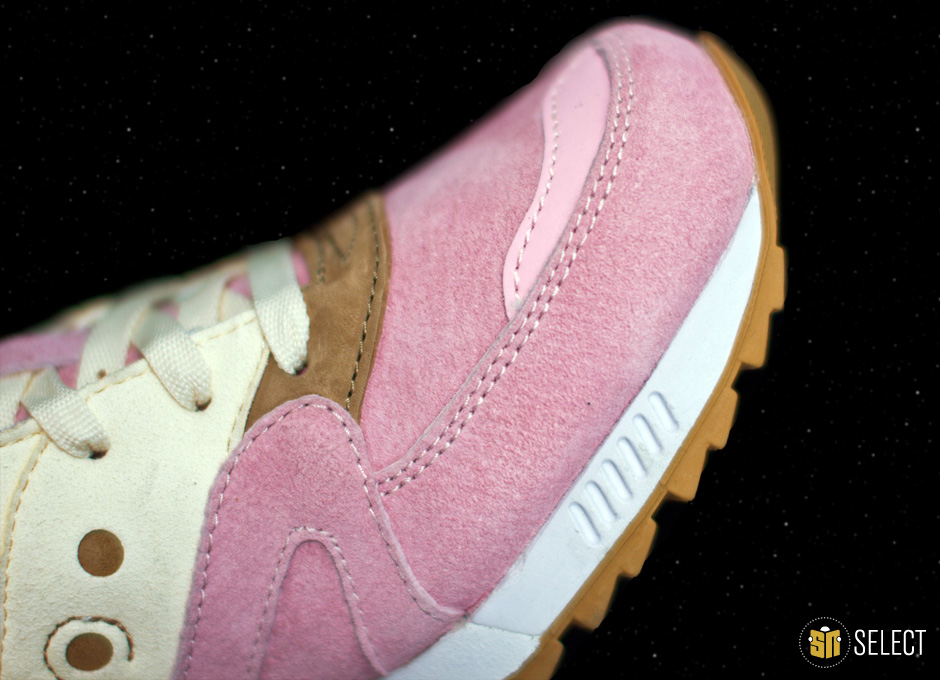