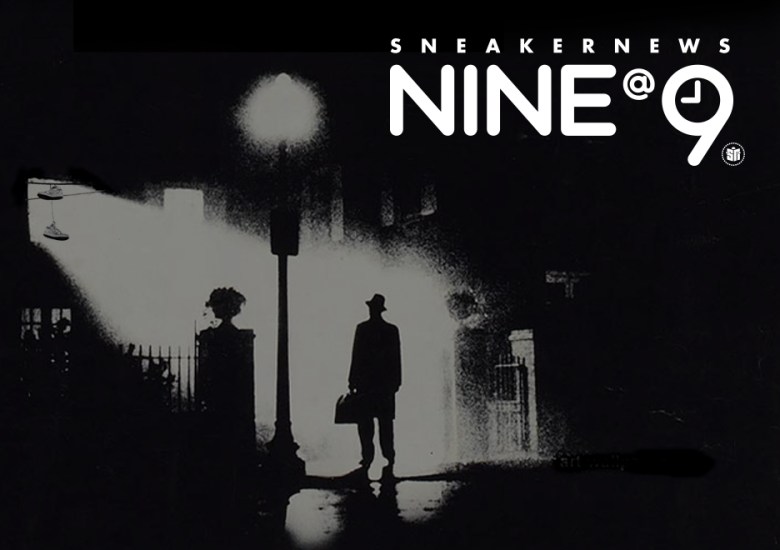 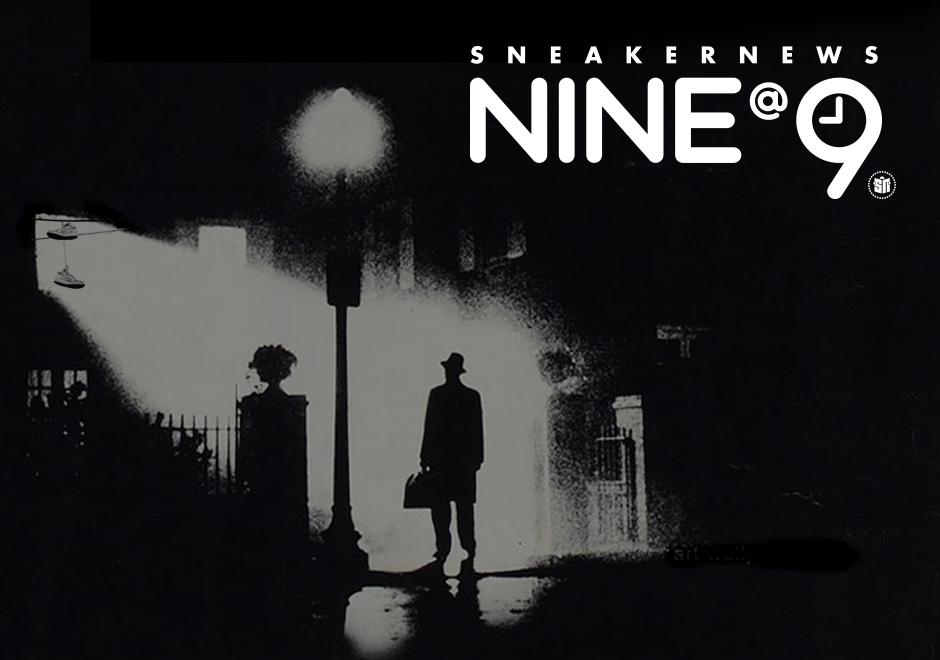 Halloween is a few days away, and with Nike stepping up with their in-house offerings quite nicely (the Air Max 90, Air Max 95, and SB Dunk Mid), it’s time for Sneaker News to chip in with a few designs of our own. Instead of drawing inspiration from the classic spooky costumes or props, we went a little deeper into the realm of the horror films. All nine films we picked have had momentous impacts on the industry of film and on pop-culture, so we did our best to give these flicks their necessary props.

Our mix of sneakers used here are the top dogs of Nike iD (the LeBron 12, Kobe 9, and KD 7), but we selected others with specific movies in mind. When you see the pairings we made, you’ll notice that the poster artwork itself played a bigger role. Without further ado, check out our latest installment of Sneaker News NINE@NINE below and checkout the 9 NIKEiD designs inspired by iconic horror movies, and let us know which you like the best! 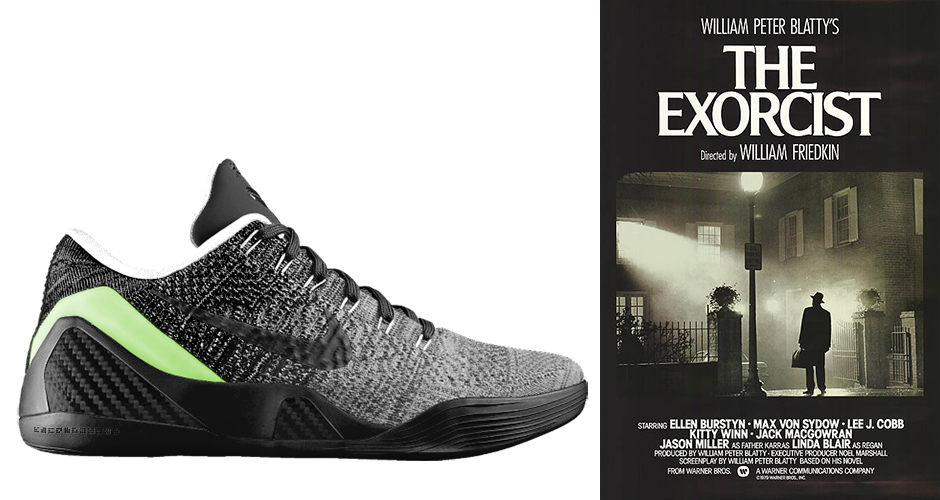 We’ll start this off with the Kobe 9 Elite inspired by perhaps the most terrifying film of all-time – The Exorcist. We’ve all seen this flick – a girl gets possessed by a demonic spirit and forces her to perform all types of insane s#&@, and the madness is only put to an end when a priest beats the living crap out of her. A similar parallel can be drawn for Kobe, who goes off on mad scoring streaks as if he were possessed by a dark power. 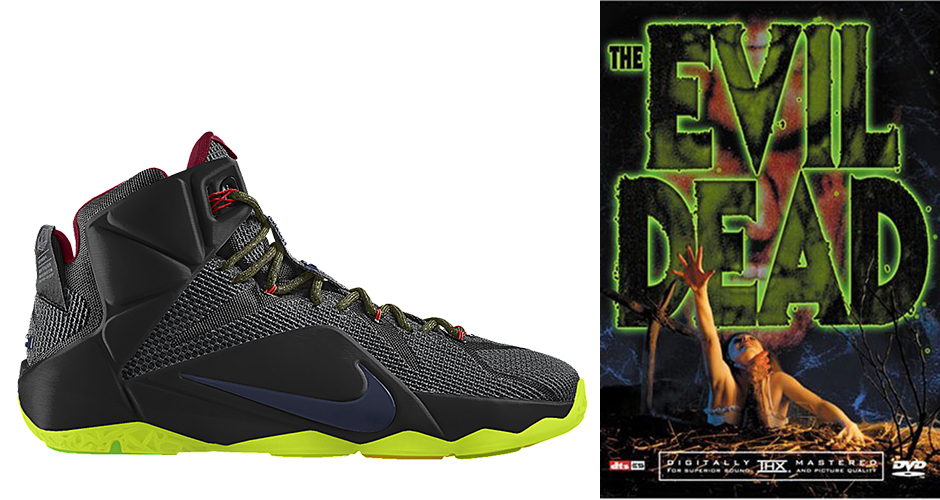 When LeBron James decided to return to Cleveland, whatever villainous reputation he harbored was done for good. You might say the “Evil” LeBron was “Dead”. Ahem. In any case, the original poster for this iconic film is actually one of the more colorful ones of this bunch, and it just so happens that the LeBron 12 iD offers up a similar color palette. 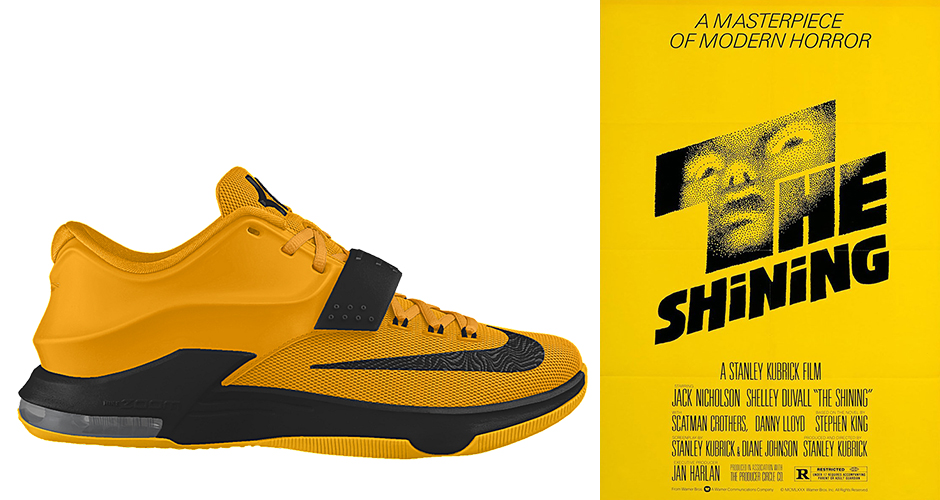 Kevin Durant’s sidelined with injury, which means he has a lot of free time to think about his comeback and ponder his next moves. We suggest he go on a solo retreat – but not at the Overlook Hotel. 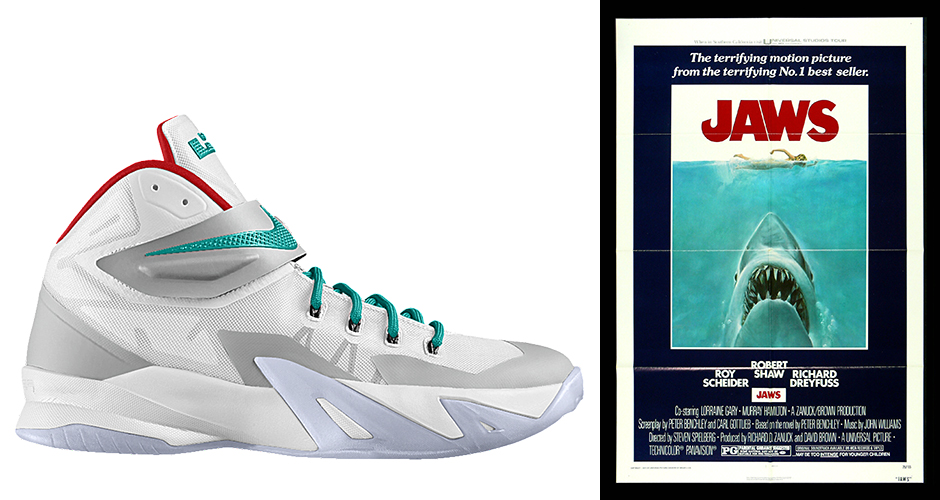 The jagged midsole design was a perfect fit for Jaws, the film about the murderous great white shark that stalked the waters of Amity Island. We chose to adapt colors of the great white (grey, white, translucent white) to pay tribute to the aquatic beast, but hit the accents with red and aqua to tie in to the OG poster. 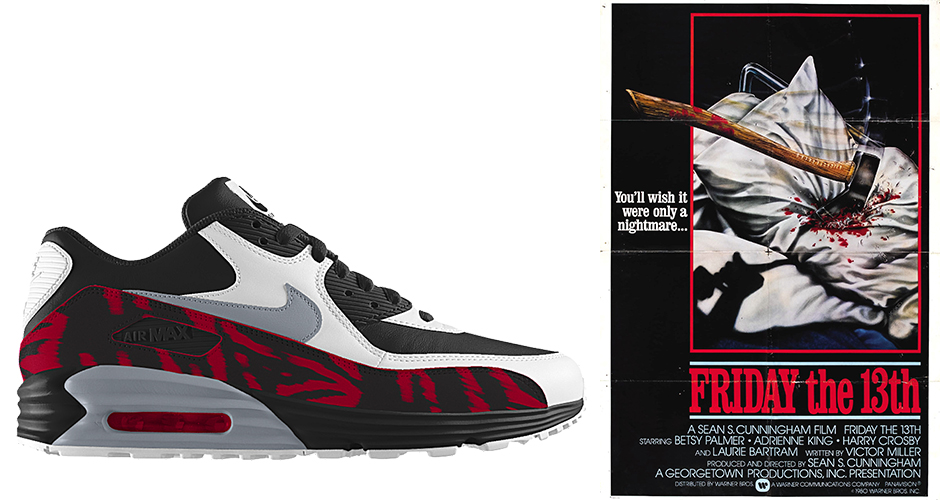 The classic Air Max 90 is a staple in today’s pop culture, as is the ominous “Friday the 13th”, which has more influence as a superstition than it does as a cheesy film. We paired these two to create an awesome colorway of the shoe, with the rippled Lunar midsole matching the wrinkles of the bloody pillow. 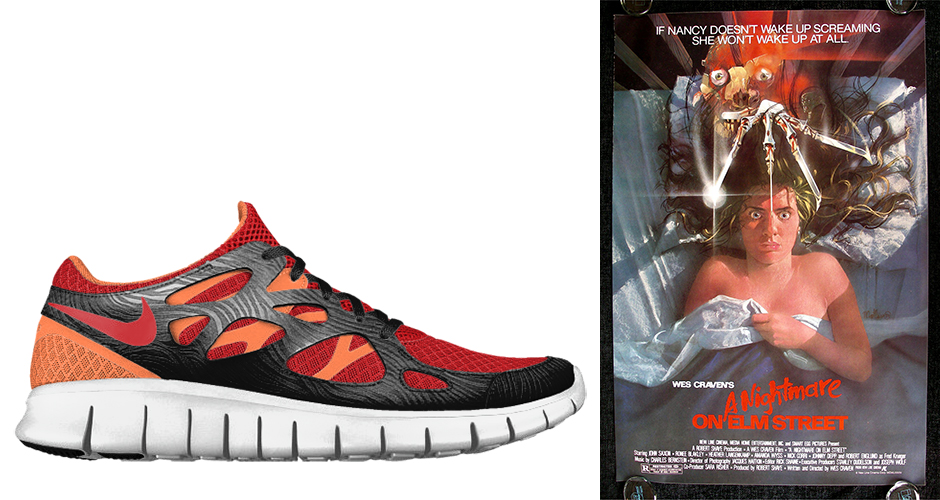 The Free Run 2 is inspired by the anatomy of the foot. To us, the concept of exposed cartilage and flesh was the perfect pair for Freddie Krueger – the child murderer that died in a burning house at the hands of his neighbors. We hit the Free Run to with red and black tones, with the bright orange matching the flesh of the butt-naked teen. We wish there were some metallic silver option on the Free Run 2 to match Freddie’s razor-sharp glove, but the light grey midsole should do the trick. 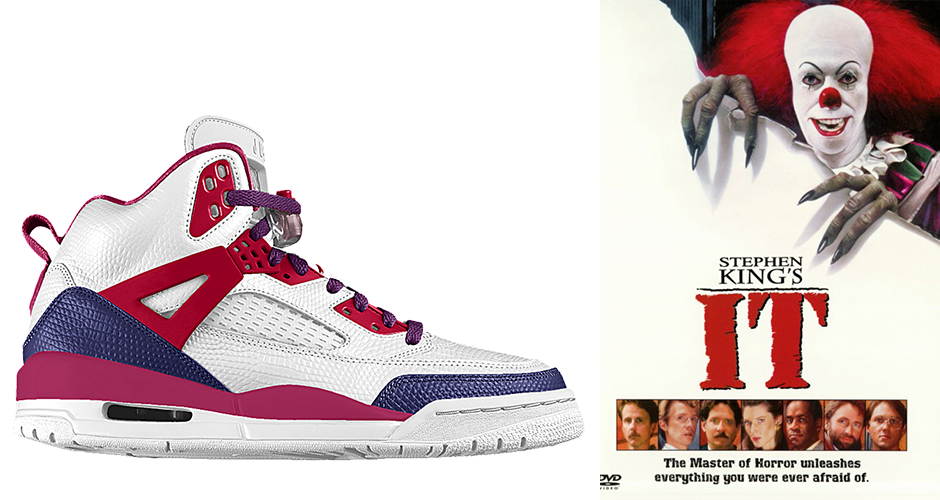 Nobody likes clowns. Especially if its a creepy humanoid reptile in disguise. Luckily for us, the Jordan Spiz’ike has some dope reptile options on NIKEiD, and when hit with a colorway inspired by the clown’s bone-chilling attire, this final result is actually pretty cool. 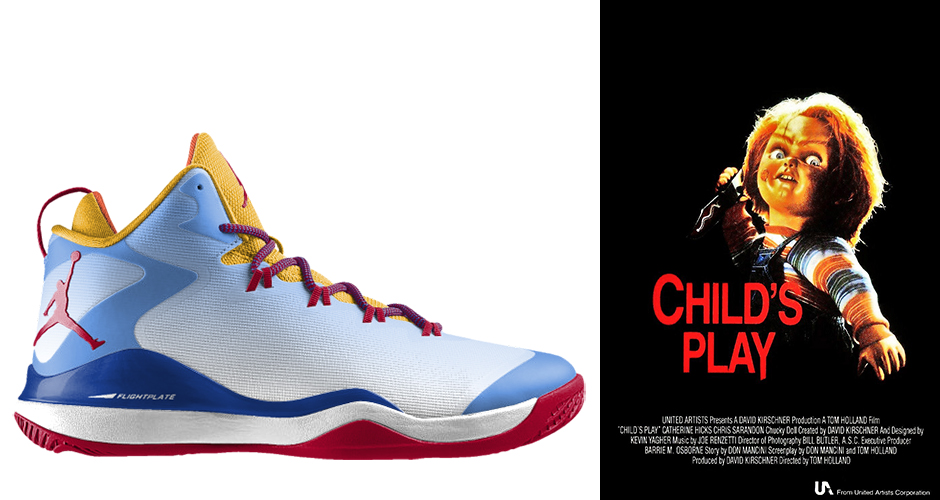 The effortless nature in which Blake Griffin rises up for a tomahawk slam or put-back dunk is rather chilling. You might say above-the-rim action is just child’s play for the Clippers Forward. Yes, that was an obvious segway. Check out the Super.Fly 3 inspired by the demonic Good Guy doll Chucky’s outfit. 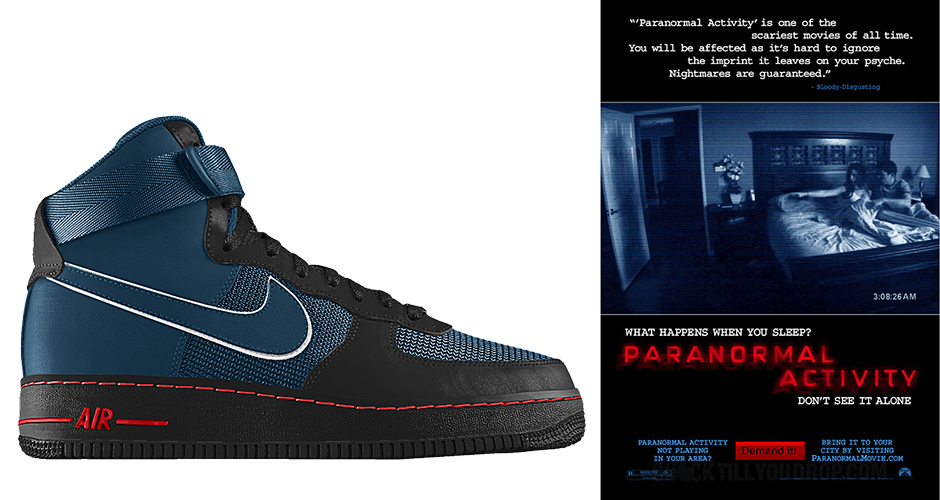 Paranormal Activity played a key role in bringing back the horror genre. This 2007 film had an incredibly low budget and was shot as low-maintenance as a feature film could possibly be. There are some parallels to the AF1; the lower-priced sneaker dominated a genre before falling out of favor, but the recent resurgence of the silhouette was a reminder that the AF1 – and the horror genre – will be here to stay.