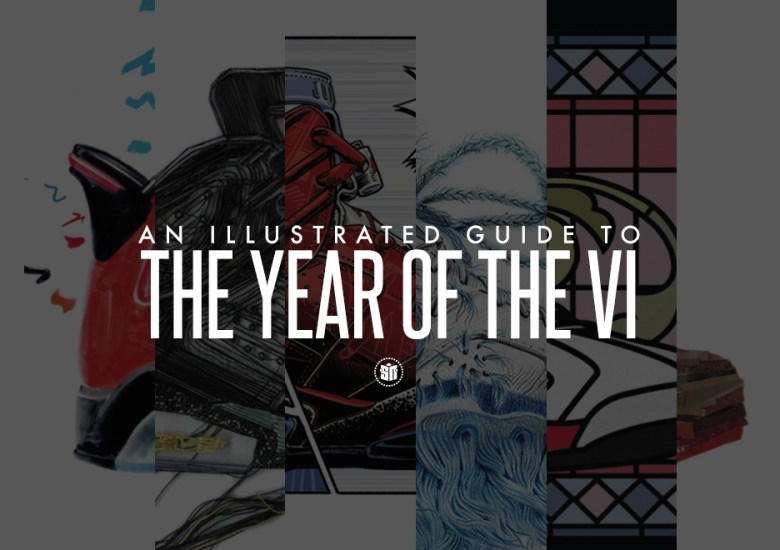 An Illustrated Guide to the “Year of the Air Jordan 6” 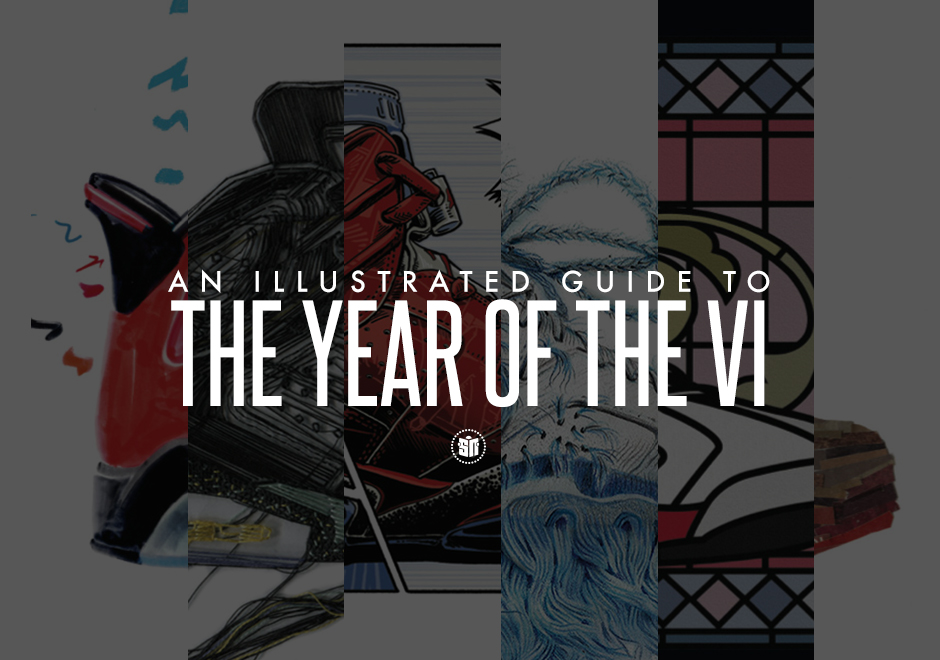 Inside SNEAKER NEWS Volume One, you’ll find our recap of Jordan Brand’s yearlong celebration of the Air Jordan VI’s 23rd anniversary. 2014 saw the release of ten different colorways of the sixth Air Jordan signature model, spanning a variety of original colorways as well as some new additions to the AJ6 family. To further magnify the different Jordan VI styles and stories that took shape over the course of the year, we had each of the ten colorways illustrated by a different artist, with each talented contributor putting their own unique twist on the lines, shapes, and colors that bring the shoes to life. Continue on for a full rundown of the “Year of the VI” releases, and look for the print version of this story in SNEAKER NEWS Volume One, available now. 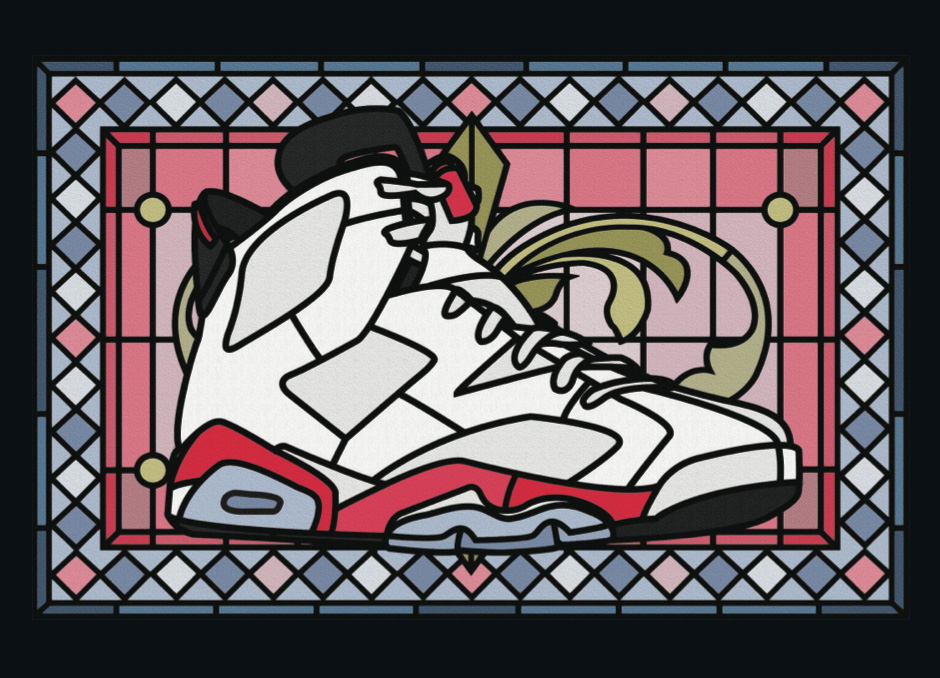 Through five installments of the Air Jordan series, fans of Michael’s sneakers had grown accustomed to the familiar shade of team-based red taken from the Chicago Bulls uniform. In 1991, the debut colorway of the Air Jordan VI brought in a fresh take on the traditional red hue by introducing “Infrared”, a far more radiant shade that packed a visual punch like never before. Since “Infrared” first hit the scene, it has been enshrined as a true milestone in the honored Air Jordan legacy. 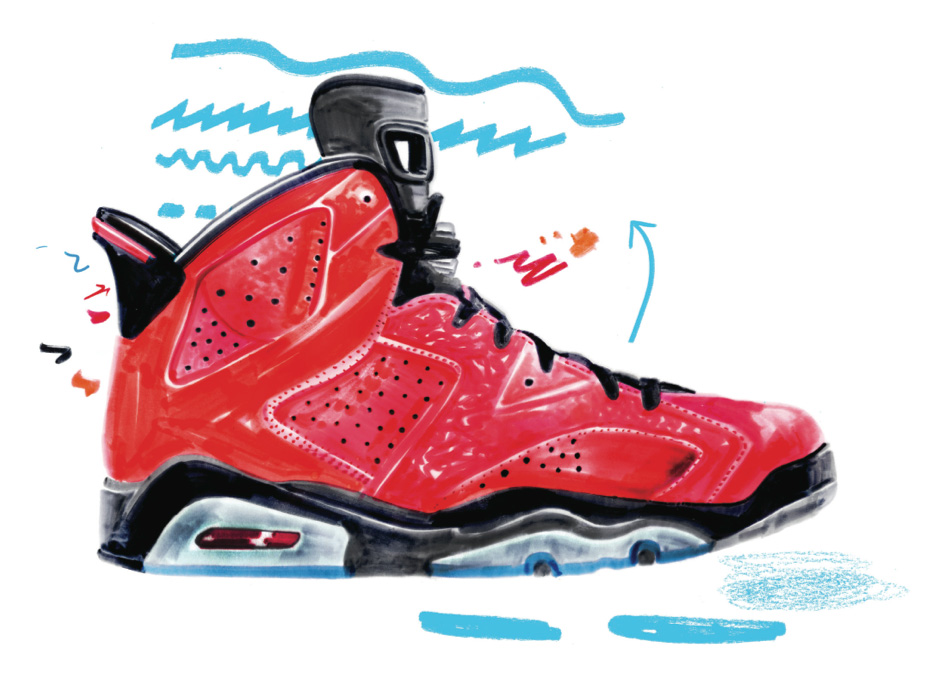 One of Jordan Brand’s go-to moves is to reconstitute a beloved colorway into a completely new form. The Air Jordan 6 “Infrared 23” took the vibrant red hue to new heights by draping it all across the leather upper, emphasizing the brilliance of Nike’s color selection for the sneaker back in 1991. Furthermore, the updated “Infrared 23” look was stretched out across a number of footwear and apparel options for Jordan Brand throughout the year, giving life to Infrared for an all-new generation of the brand’s devotees. 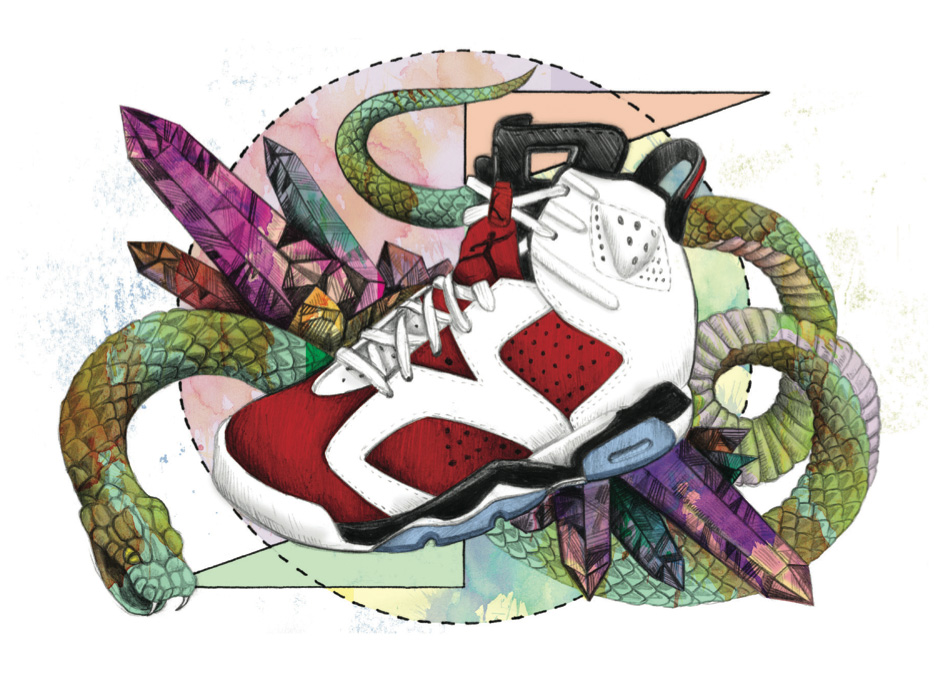 Nike and the Air Jordan VI continued pushing the envelope with the original release of the “Carmine”. Just in time for the start of the ’91-’92 season, this daring colorway mirrored Michael’s bravado as it featured an unprecedented arrangement of color-blocking never before seen on an Air Jordan. This bolder composition contrasts highly against the four other original Air Jordan VI colorways that made use of an all-white or all-black upper, and today it continues to be touted as one of the best Air Jordans of all-time. 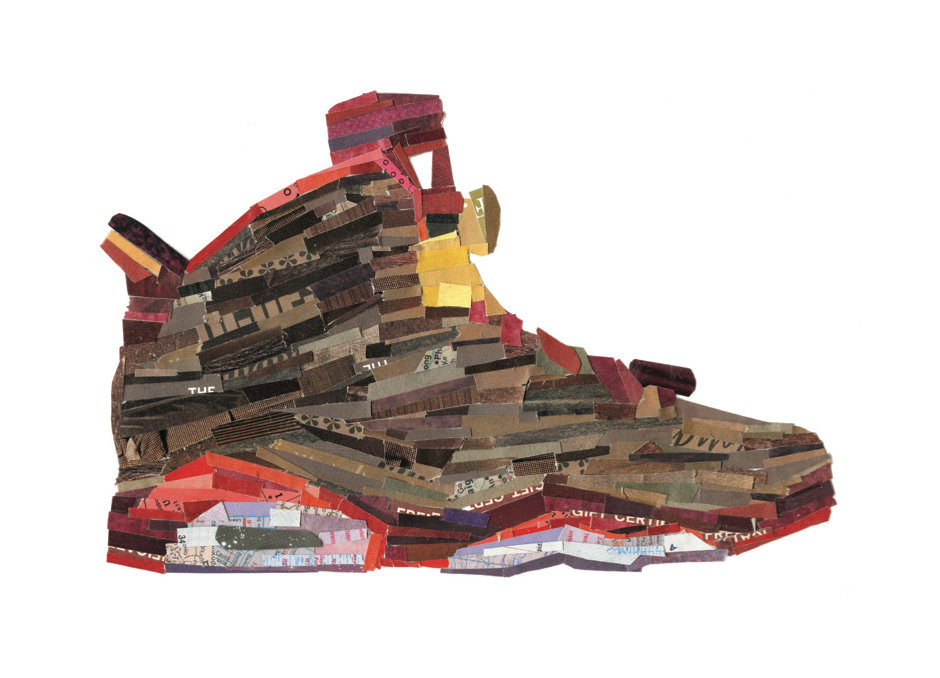 Michael Jordan knows how to enjoy the finer, well-deserved things in life. The basketball legend had six opportunities to celebrate the game’s most prized reward, and throughout those half-dozen festivities, Michael did so by indulging in a finely crafted cigar – the inspiration behind this premium-grade Air Jordan 6 release. In addition to the luxurious brown and maroon color palette, a championship ring lace-lock was added to further the effect, while a special crest graphic detailing his NBA titles was ingrained onto the heel. 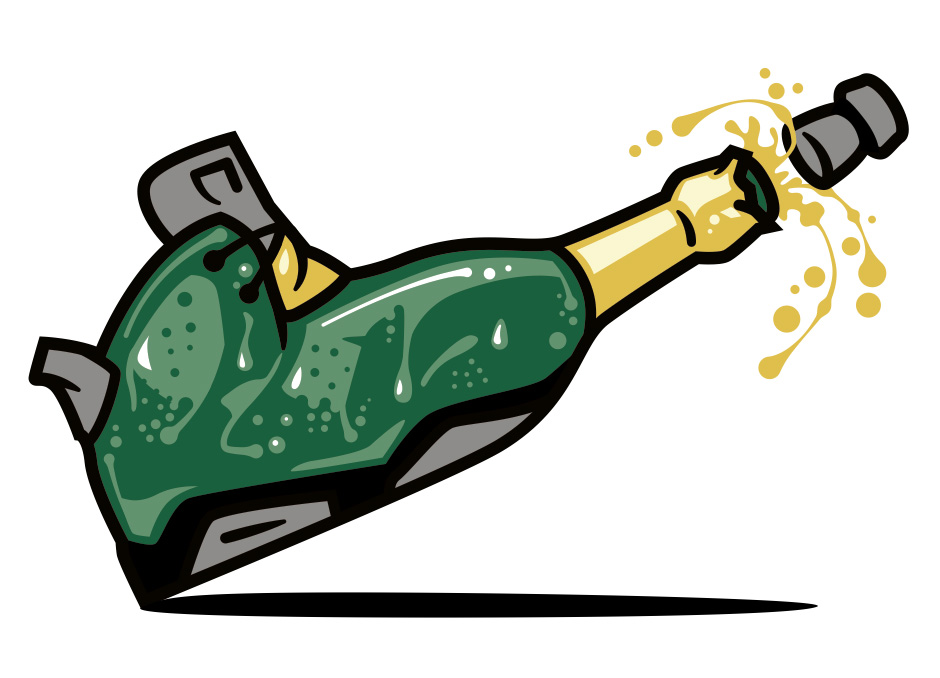 Alongside the “Cigar” colorway was this eye-catching “Champagne” edition. Designed after the celebratory locker-room bottles that Michael Jordan was no stranger to following his six championship runs, this upgraded Air Jordan VI release introduced a glossy green upper and opaque materials on the tongue and heel-tab to convey the bubbly champagne bottle theme. The boost in luxury was a big hit at retail as both the “Champagne” and “Cigar” releases were highly sought after. 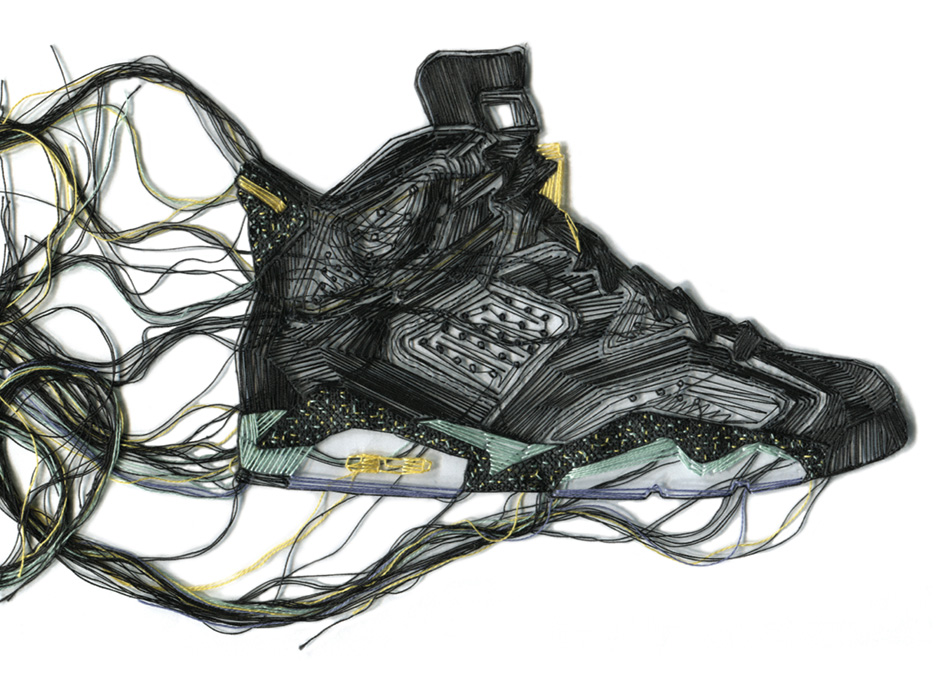 The Air Jordan 6 took its year-long celebration to the global stage with the “Brazil” colorway. While Jordan Brand seldom crosses paths with the sport of International Football, bridging the world’s most popular sneakers with the world’s most popular game was an opportunity to be seized. Especially with the tournament’s host country gunning for a record-setting sixth World Cup title, there was all the more reason to match it up with the Air Jordan 6 model. This limited release was only available as part of a two-shoe pack alongside the CP3 VII AE. 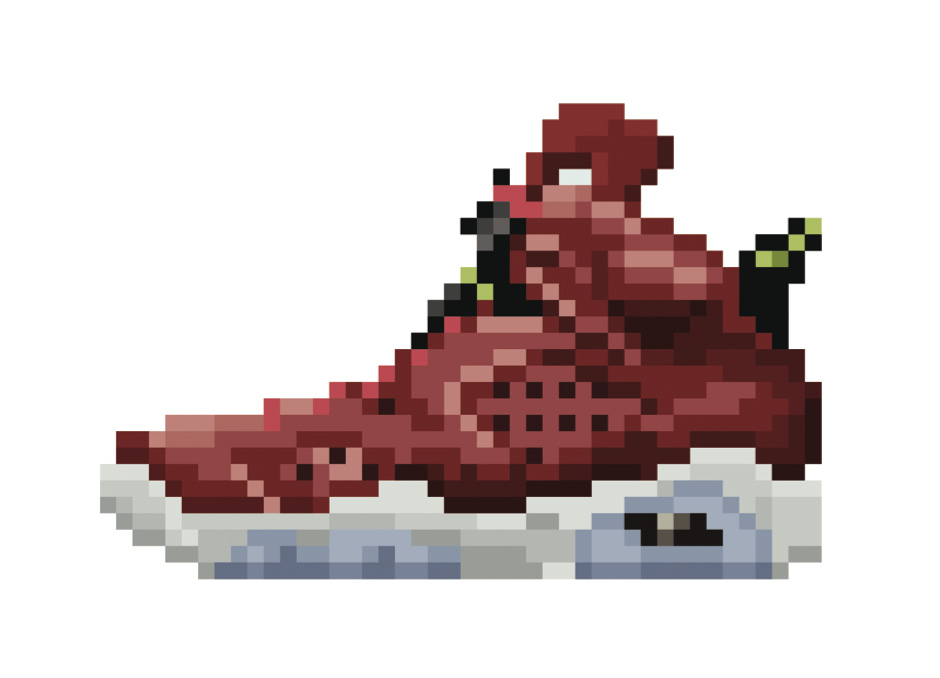 In August, Jordan Brand re-released the original Spiz’ike sneaker that was first introduced in 2006. Alongside that retro re-issue was an Air Jordan 6 paying tribute to the Spike Lee-inspired shoe, featuring a recomposed color approach and the signature laser-etch graphic on the inner lining. The connection between Spike and Jordan dates back to a number of memorable Nike advertisements featuring the filmmaker alongside a young MJ, including a fondly remembered 1991 spot for the Air Jordan VI. 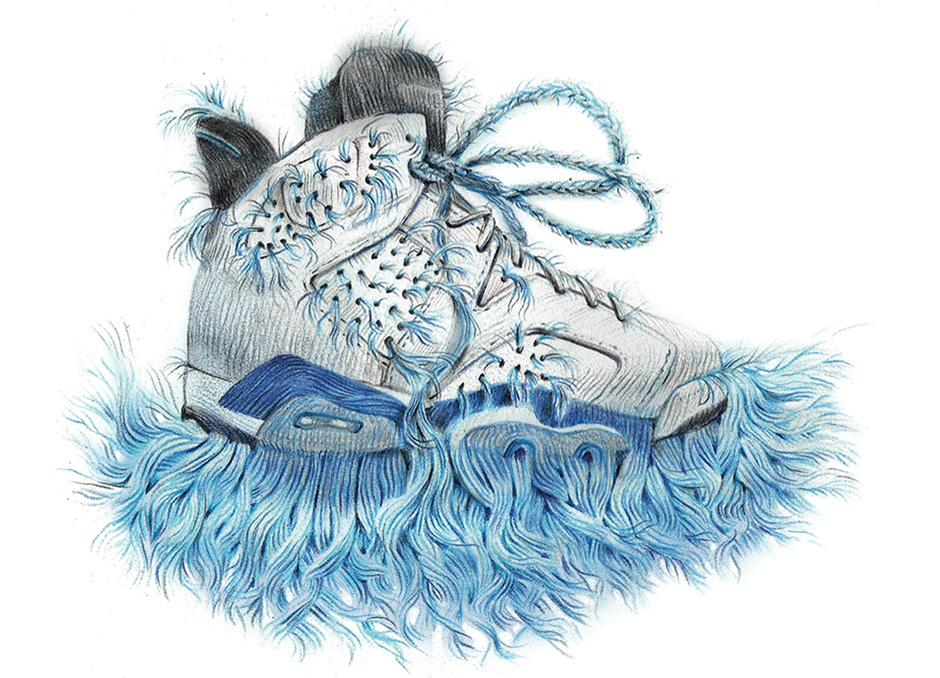 The “Sport Blue” sat within a diminishing group of Air Jordans – one that holds some unique esteem in sneaker culture. This Air Jordan 6 was one of the last few OG colorways that was never re-released by Jordan Brand, but that all changed in August when the Sport Blue finally hit stores for the first time since 1991. Quite the simple approach compared to all of the catchy concepts that have been introduced since, but these stand as a reminder of a time in sneaker history when less was more. 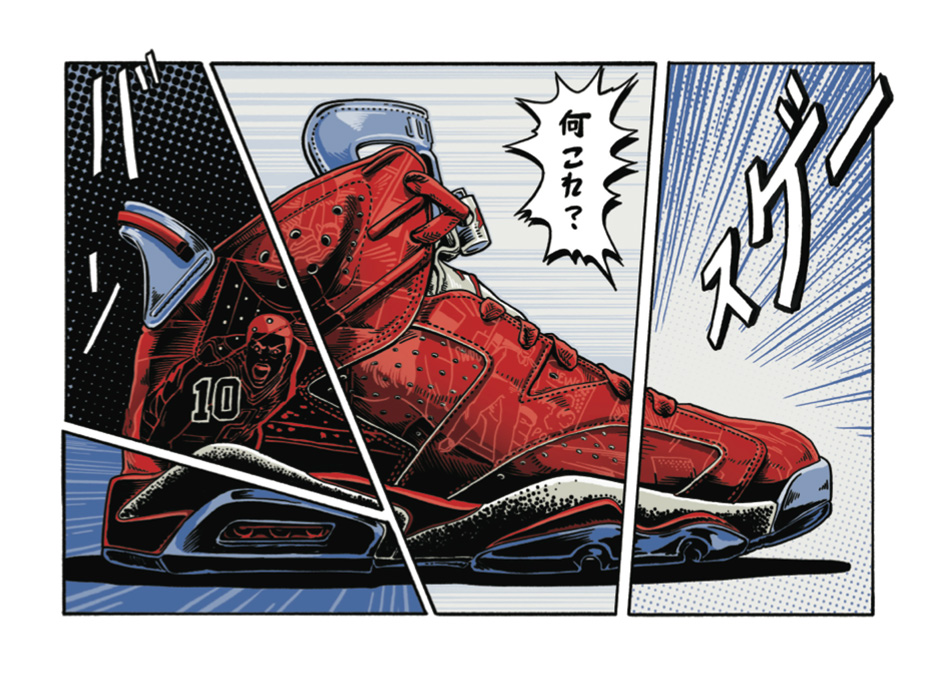 Michael Jordan was more than a sports superstar in Chicago, Illinois – he was a global icon that influenced style and culture on and off the basketball court all over the world. As with most other places, Michael was revered in the Far East and had his legend further immortalized in the popular Japanese manga, Slam Dunk, which featured a team of swagger-heavy high school ballers wearing the Air Jordan VI. To close out the year, Jordan Brand returns the nod of approval and brings the pages of Takehiko Inoue’s series to life with an artful concept featuring imagery from the comic on a red reflective upper. 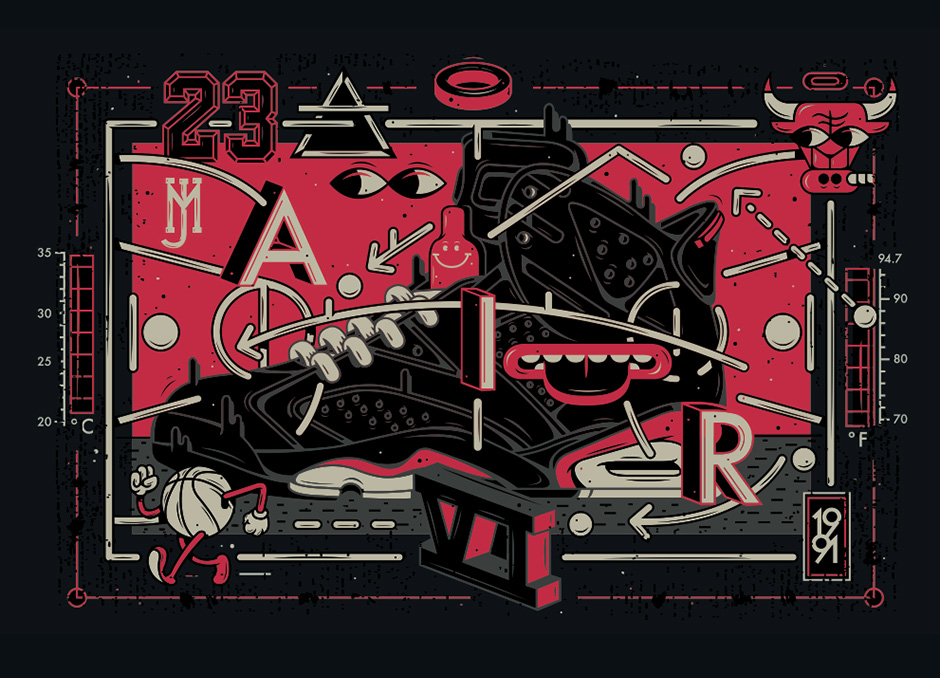 Illustration by DXTR The Weird (

If there is one sneaker that is synonymous with Michael’s success, it’s the Black/Infrared Air Jordan VI. This exact sneaker is what MJ laced up throughout the 1991 NBA Finals, which would eventually unfold to be his first-ever NBA Championship. A massive hit on the court and in pop culture fashion, the “Black/Infrared” is truly the stuff of legends, and throughout its various Retro iterations over the years, it has endured as one of the most sought-after Air Jordan make-ups of all-time.