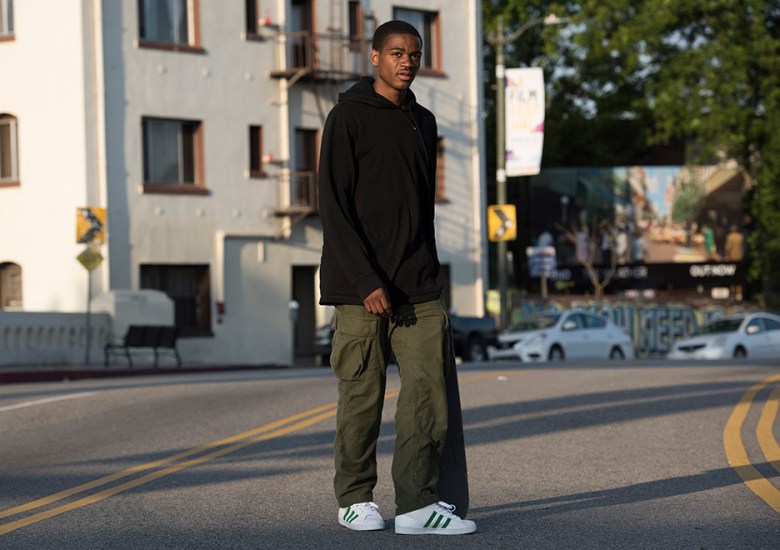 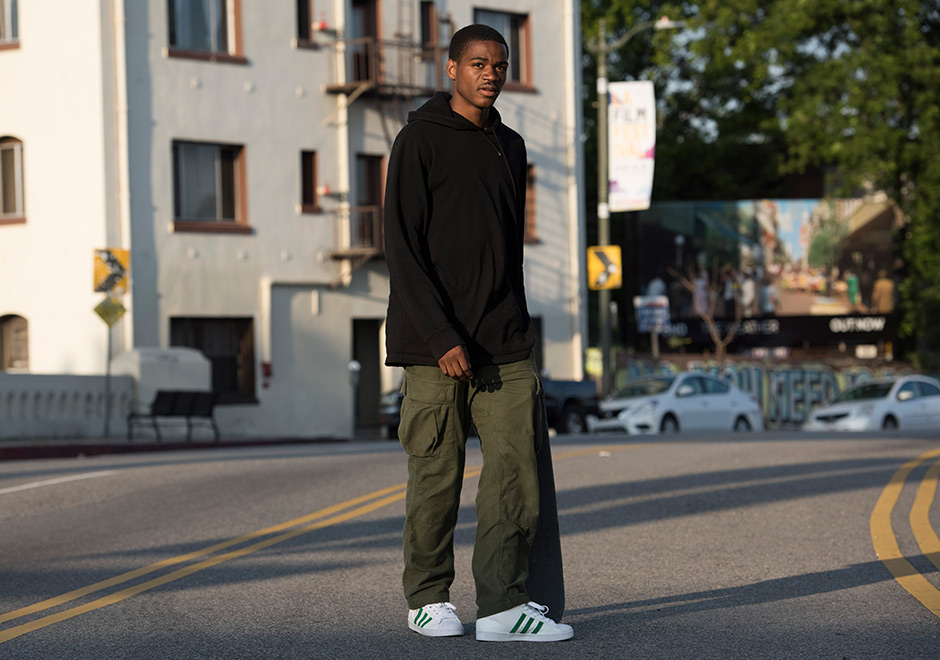 The way Tyshawn Jones tells it, he kind of just fell into this whole being a world-class skateboarder thing. The humble 18-year-old rose to prominence with Supreme’s Cherry video back in 2014 and has since garnered praise from skateboarding’s elite while earning himself a sponsorship not only with the world’s most prolific streetwear brand but with adidas Skateboarding, too. In his spare time, the eclectic Bronx native has stayed true to his roots with a handful of hobbies ranging from an upcoming mixtape with fellow adidas sponsored skater and Earl Sweatshirt companion Na-Kel Smith, designing clothes with his friends under the Hardies Hardware name, and more.

This September, adidas Skateboarding has linked up with Tyshawn for his very own adidas Pro Model marking another accomplishment for the young skater who was more prone to playing Tony Hawk inside than actually getting on a board and riding just a few years ago. The premium snakeskin offering features a nod to his late dog Nico with luxurious accents throughout. We talked to Tyshawn about his life in New York, what it’s like to be associated with two of the biggest brands on the planet, what he’s listening to for inspiration, and his relationship with iconic skate videographer William Strobeck. Read the full interview below and be on the lookout for the Tyshawn Jones x adidas Pro Model Vulc ADV on September 5th for $95 USD. 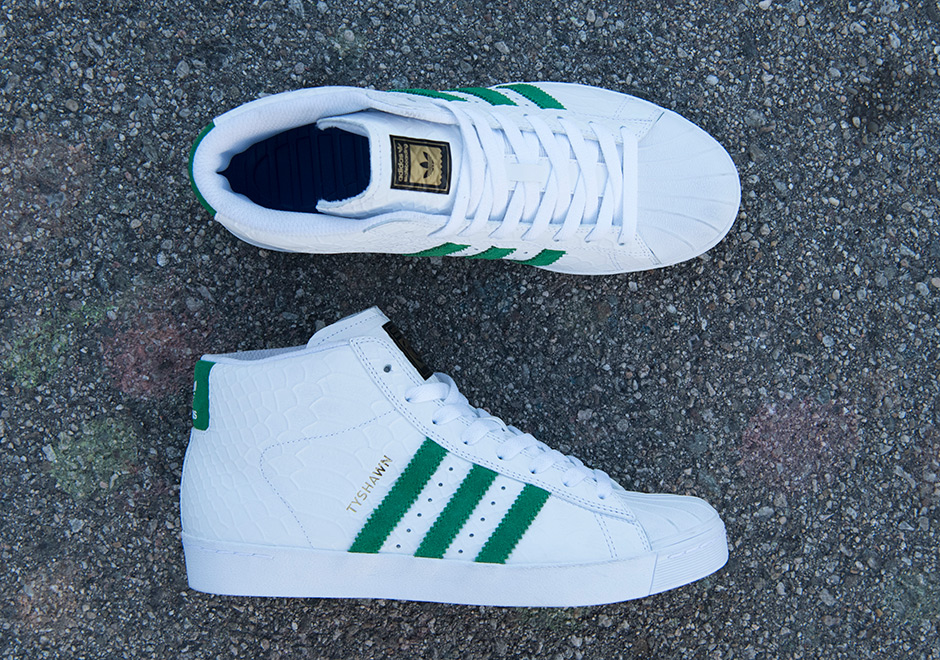 Tyshawn Jones: I don’t know. I kinda just skated and it all happened. I didn’t pick the companies I rode for – Supreme just kind of happened. adidas came in second and yeah, everything just kind of fell into place. I guess I just got God on my side. Hardies is a company based on a game we used to play as kids for a very long time. I’m happy to ride for all these companies and I’m just super grateful.

SN: Getting your own adidas colorway is any skater’s dream and the Matchcourts that released previously were more of a Hardies collaboration. So what was going through your mind when adidas blessed you with your own colorway?

TJ: I was just happy. I was excited for them to come out for a long time and kids been seeing them on Instagram so they want ’em and everyone’s been waiting on ’em so I’m excited to just see them on the street. When I see them outside and somebody’s wearing them than I can just be like ‘wow, my work here is done’. I want to see everybody wearing them. 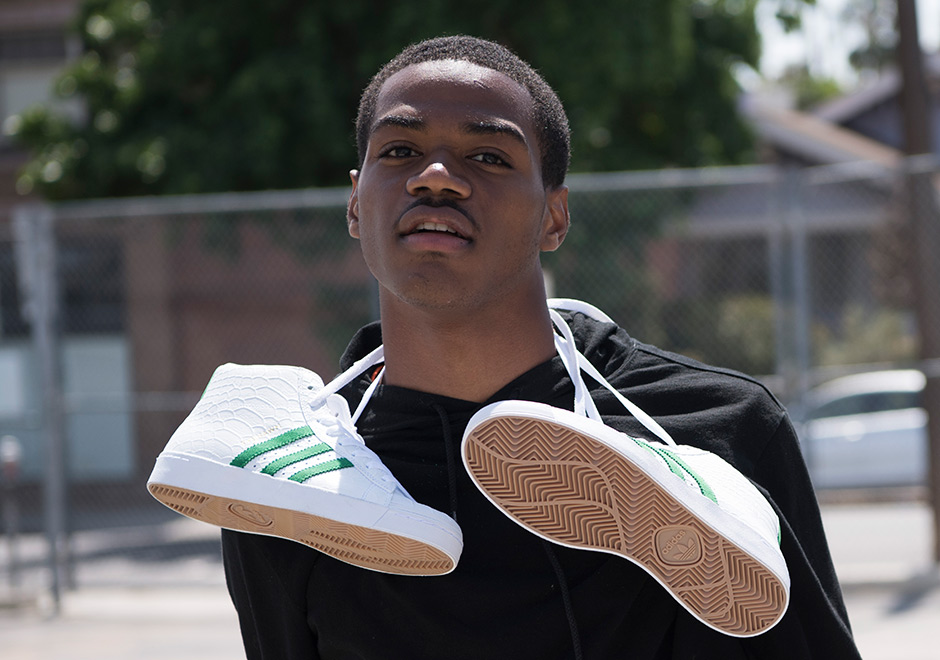 SN: Since you’ve been surrounded by influential people in the skate world for such a long time, what’s the most important piece of advice you’ve received so far?

TJ: I don’t know, that’s a hard one. I’ve been given advice so much, not that I ask for it, but that it’s been given to me. But it’s mostly people just saying ‘hey, keep doing this’. People just tell me to keep doing what I’m doing because I’m pretty much good– I’m in a good space because I don’t drink or party. I got my shit together. They just tell me to keep skating and don’t fall off so I never really get advice like ‘you’re fucking up, get it together’ it’s always good advice like ‘I’m happy to see you doing what you’re doing’.

SN: Can you talk about the colorway and materials used for your Pro Model ADV Vulc?

TJ: I put the dog [Nico] on the tongue – rest in peace – because that was my baby, my first dog. I picked green because he liked his food that came in a green bag and I thought it went well with it. I picked the snakeskin because I was doing research on a bunch of shoes and I was like ‘what will be different?’ Like I didn’t just want to make them white leather with green, I wanted to do something different. For the snakeskin – I don’t know if people think it’s gonna be weird – but I’ve tested them out a lot and they’re really durable. I think it just adds a little bit of flavor to the shoe. You might not notice it’s there but I think it just looks better than a plain white leather. It gives it a little bit more. Something different for sure. I didn’t want it to be too basic. 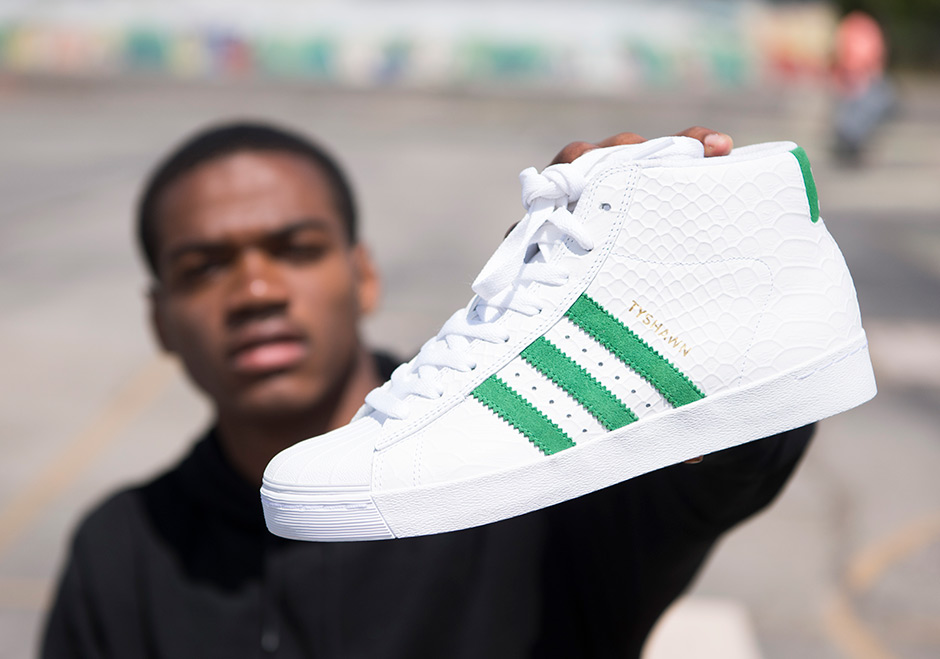 SN: You’re a huge hip-hop head and you’ve said that you might have a mixtape dropping in the future, what are you listening to right now?

TJ: Money Man just dropped some shit. He hard. Ralo hard. Chief Keef. I be listening to his old stuff because he ain’t been dropping nothing lately. I don’t know what he’s doing. His management really sucks. He like created a lot of these new rappers and he should be the biggest – he is the biggest – but he should tour. He could be really doing well for himself but it seems like he doesn’t really care.

SN: So what about your own mixtape that you’ve been teasing for awhile now?

TJ: I don’t know. I just been making songs in the studio and me and Nak, [fellow adidas Skateboarding rider Nakel Smith] we wanna drop a tape together. I think it’s gonna be 12 songs. 6 and 6. I’m gonna have six songs then he’s gonna have six. I don’t know we just been playing around with it [laughs] but maybe we’ll get big at it and be rapper/skaters, that’d be funny. 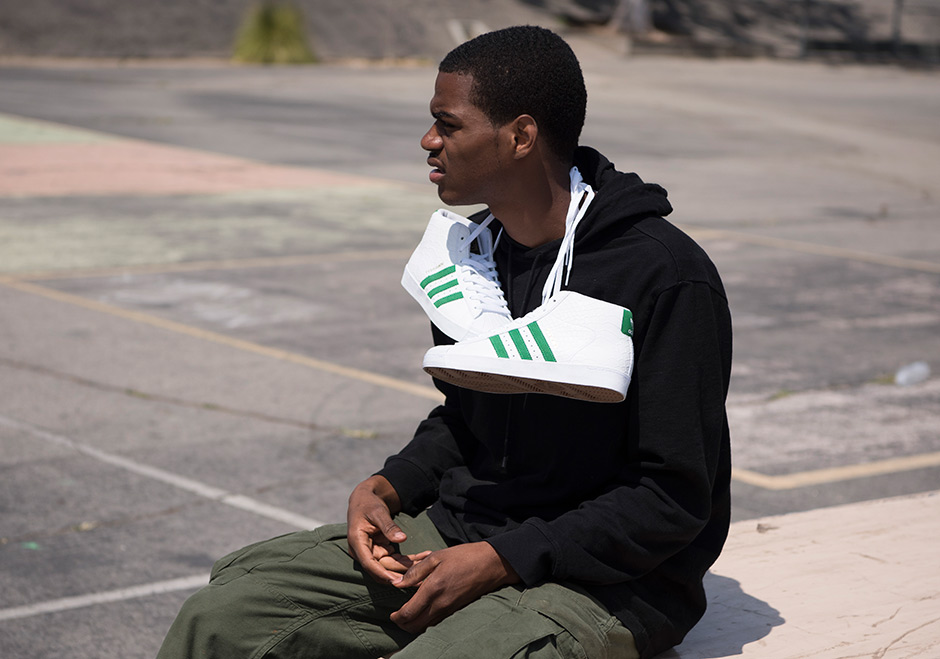 SN: What’s your relationship with (director of Supreme’s “Cherry” video) Bill Strobeck like?

TJ: That’s my friend, like, I don’t really think of it like he’s a legendary filmer. People are always like ‘you’re friends with Bill Strobeck, you film with Bill, how is that?‘ I don’t even think of it like that’s my film guy. We just be kicking it. Just laughing, having fun, fucking around, making jokes. It’s not like that’s my Supreme connect. We go eat, we go chill. There’s more to it than just going out and making clips. It’s fun. That’s my bro. He’s 39, I’m 18. We’re just out there running the streets. I think we need a tv show like Rob & Big and go viral [laughs].

SN: A lot of skaters end up hitting a point in their career where they move out to Los Angeles, but you’ve always managed to stay home in New York. Is there any particular reason for that, and what are your favorite spots to skate in the city?

TJ: No disrespect to California, I love it, but it’s not for me. It’s too slow pace. Everybody moves too slow there. I love New York because I don’t need anybody. I can move around. If this is boring then I can be like ‘I’m out’. You can break out fast – if you’re in Pasadena and you’re in a car with a whole bunch of dudes and decide you’re over this, you can’t just leave because transportation is different out there. Out here you can do whatever you want. Everything in LA is so slow pace. You can go out to Tarzana and get stuck out there for the whole day then get kicked out the spot and the day’s over. New York – I can go to every five boroughs and New Jersey in one day and still have time to go do some other shit. You can just do more. It’s just faster to me. I like New York because it’s so fast. I just don’t really have a lot of patience. I don’t like sitting around. I’m like ADHD – I like moving. Maybe if I’m an old man and I make money for some houses – you can’t really get a big house in New York. I don’t know. Maybe if I run up a big bag I’ll move to Cali when I’m old. 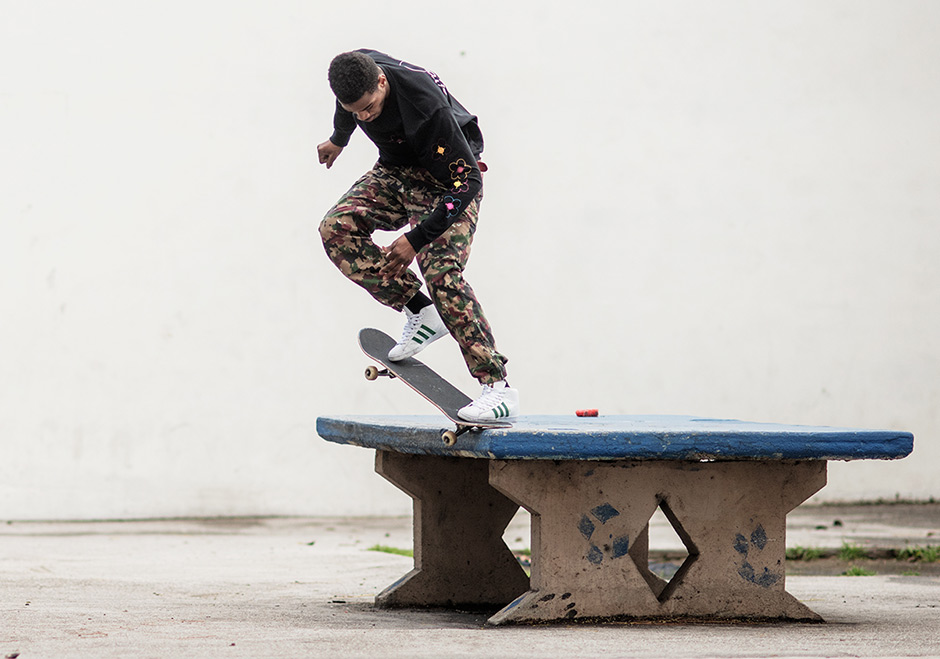 SN: So what’s your goal for the rest of the year and do you have any advice for someone looking to break out as a skater?

TJ: My goal is to just keep skating. I’m not looking to drop anything this year, I’m staying a little low-key but this year I’ve been putting in a lot of work skating the hardest I can. I think I’ve been skating the best I’ve been skating in my career yet so I’m excited for everybody to see what me and my friends have been working on. 2018 I just want them to know I’m coming [laughs]. But advice for the kids: just have fun, do you, stay true and it’ll work. Everything will work out. Do you.