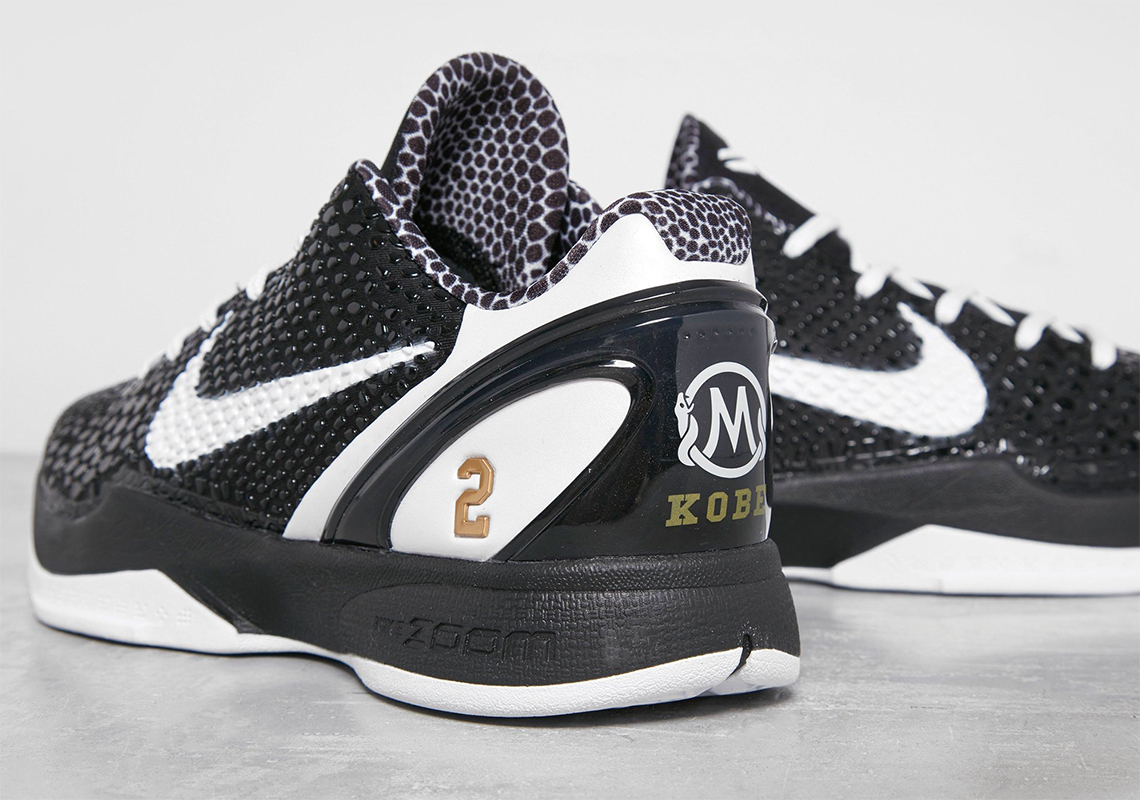 Back on April 19th, it was reported that contract between the Kobe Bryant estate and Nike had officially ended. That news spread like wildfire, although the headlines were far more salacious than intended as due diligence is just a part of shoe contract re-negotiations. Prior to his untimely death, further light was shed on potential plans for Kobe Bryant to start his own shoe company death. As of today, a new contract has yet to be agreed upon between the Swoosh and the Kobe Bryant estate.

On May 19th, a new Kobe 6 Protro shoe revealed – the “Mambacita”. Dressed in a white/black colorway matching Gigi’s Mamba Academy uniforms, this Kobe 6 Protro features both jersey numbers of father and daughter at the heel, with the Mambacita Sports logo at the heel. A release date of any kind has yet to be revealed. Vanessa Bryant took to Instagram today to confirm that she herself picked out the colorway and design of the specific shoe, and that proceeds would go toward the Mamba Mambacita Sports Foundation had a release occurred. She also reveals her disappointment in that the shoes somehow landed in the hands of the public, leading her to establish that shoes are not approved for sale whatsoever as she did not renew her late husband’s contract with Nike.

The Kobe 6 Protro “Mambacita” did not officially go on sale anywhere nor has there been any confirmation of a release. The photos of the shoes pictured here were leaked by @brandon1an, a Twitter user who scrapes internal servers of footwear retailers to search for newly uploaded photos. The photos that were leaked were from UK-based Foot Patrol, once an independent sneaker boutique that is now under the Size? umbrella. The photos were never uploaded publicly by Foot Patrol, Size?, or Nike. Since the photos have leaked, Nike has yet to release any sort of statement as negotiations between the brand the estate continue.

So why did the photos leak back in May? Retailers receive shipments of products long before an intended release date, and they often prepare in advance of a release (taking photos, building product pages, etc.). The brand itself prepares long in advance as well, which explains the “official images” being posted on Sneaker News and other sneaker media outlets/social media accounts. As negotiations continue, there are currently zero plans of releasing Kobe footwear. The only such release was Undefeated’s collaboration of the Kobe 5 Protro, which we now assume was approved by the Kobe Bryant estate as that release was scheduled for the week leading up to the Hall Of Fame induction.

So how did the shoes land in the hands of a consumer? Instagram users have stated that some consumers received the “Mambacita” pair because Foot Patrol mistakenly shipped out wrong items for their release of the Kobe 5 Protro “Hall Of Fame”. Others accuse Foot Patrol of “backdooring” the product to high bidders. Nike, however, did not intend for any pairs of the release to go out to the public. Generally speaking on leaked pairs, “early” pairs that somehow escape the factory walls in Asia, or retail pairs that are back-doored from retailers have been the norm for decades. Other sneakers that are intended for release and are later cancelled are to be sent back to the brand. It’s something that is difficult to control as it is out of the brand’s hand, although Nike and all other footwear manufacturers such as adidas, Jordan, New Balance, etc. have taken swift moves to keep their own manufacturing factories as well as partnering retailers in check. Early pairs still end up in the hands of high bidders; they are not the result of an official release nor are they affiliated with any brand whatsoever.

Simply put, Nike did not release the shoes nor did they approve the release of the shoes. The shipment just arrived at a retailer and they went on business as usual with the product photography, and given the sheer amount of product that retailers have to deal with on a daily basis (not just from Nike, but all brands they carry), these just slipped through the cracks. This happens from time to time; back in 2010, Nike intended to cancel the release of the LeBron 7 “MVP” after the negative backlash of the “Decision”. Some retailers still received pairs and were sold under the table to high bidders. Nike officially released the shoe for the first time in 2020.

This public message from Vanessa, however, suggests that negotiations are at a standstill. Let’s hope that an agreement can arrive sooner than later.