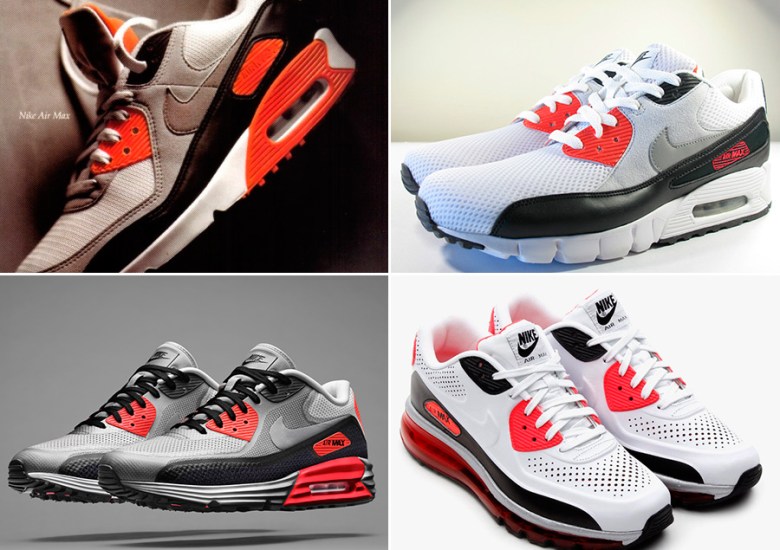 Infra-evolution: The Nike Air Max 90 “Infrared” in All Its Forms 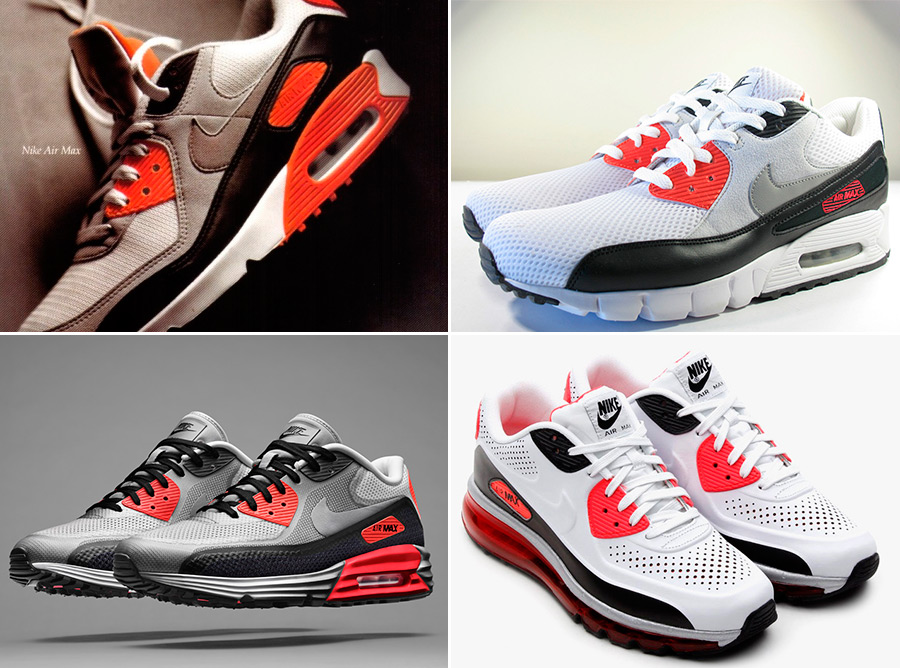 One reason the word “iconic” has become overused in sneaker journalism is that there are a handful of shoes so perfect that they’re both quintessential to a brand’s identity and continually available. The Nike Air Max 90 is one of those ubiquitous masterpieces. Tinker Hatfield’s third Max Air runner was so good that it practically owns a color that was only applied to it during the retro stages.

That last fact is poetic for a model that has given itself to quite a variety of hybrids and updates over the years. The AM90 has transcended beloved retro status and elevated to a true cornerstone for Nike Sportswear, a core element around which to introduce new ideas. The palette synonymous with the silhouette has come along for the ride on most of these revisions, so let’s take a moment and examine the various ‘Infrared’ Air Max 90 variations released over the years on the eve of tomorrow’s Air Max 90 2014 Leather that serves as the latest extension of the process. 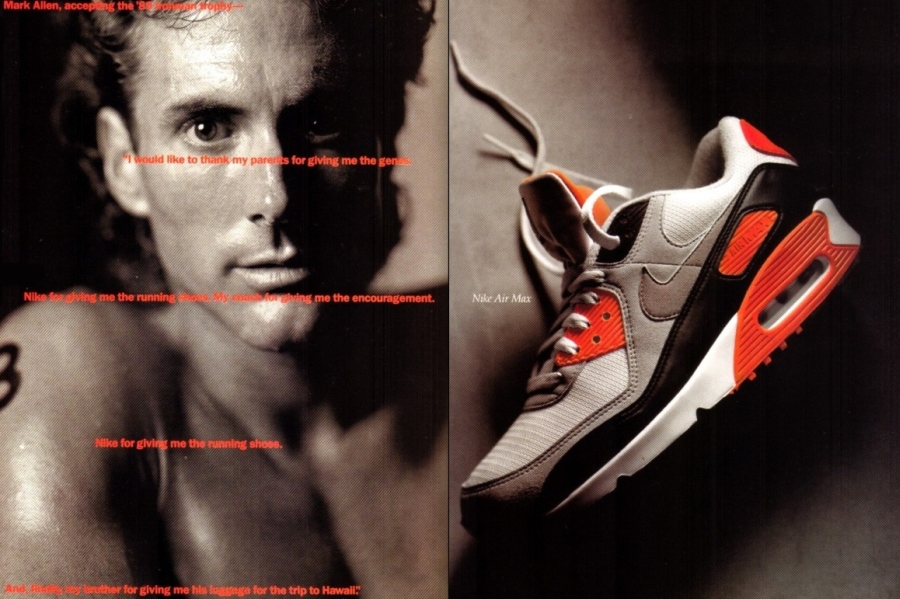 The original 1990 Nike Air Max (III) actually dropped in a color called Hyvent Orange. You might remember that classic magazine ad featuring six-time Ironman champion Mark Allen. This singular build has of course been retrod plenty times since in HOA, VNTG, and plenty other forms. 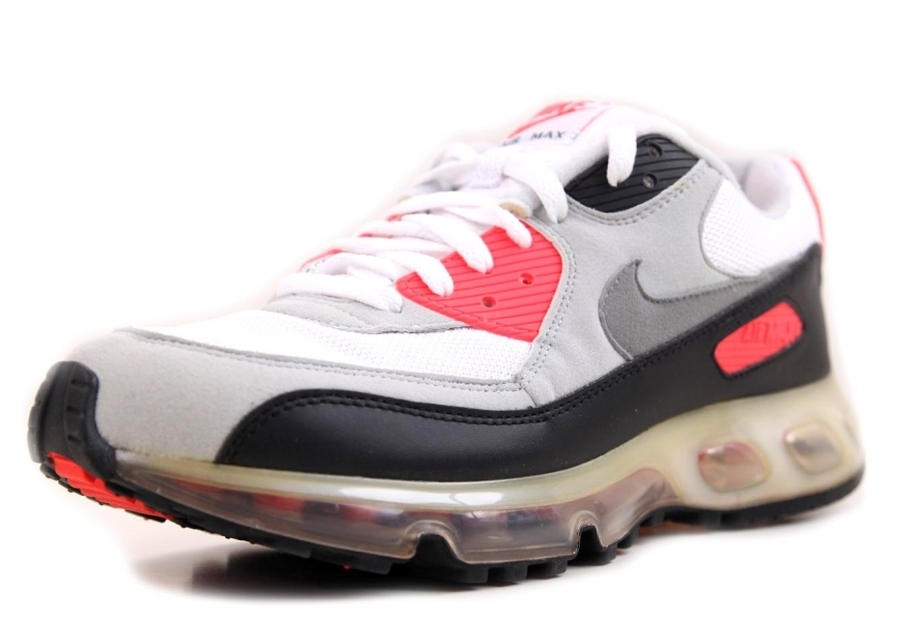 The first Air Max 90 hybrid released in 2006. It was part of the ‘One Time Only’ pack, but the modular design concept was just getting started. 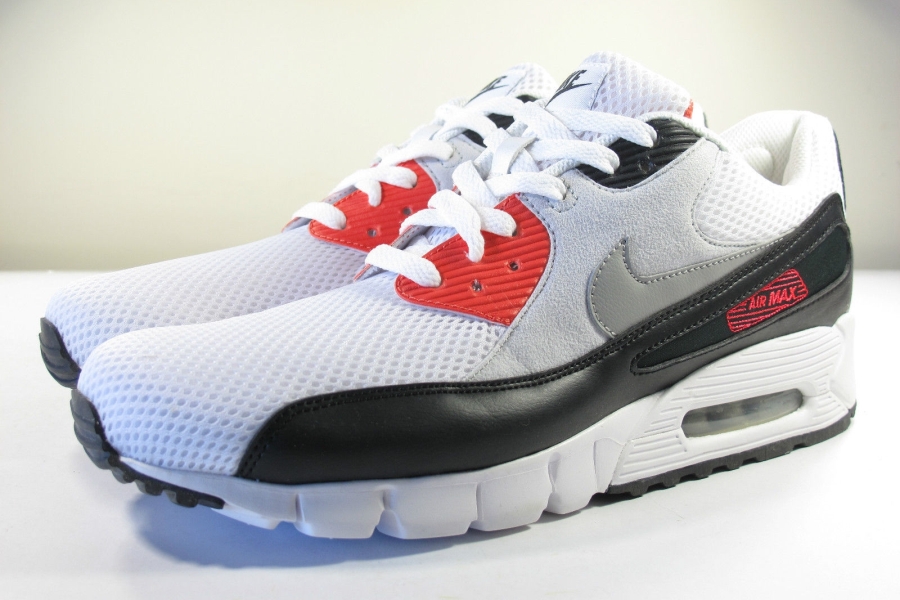 The Air Max 90 Current picked up on a trend of incorporating Free natural motion soles into existing designs. There was also a Current Moire building off of this design but that short-lived style never saw an ‘Infrared’ release. 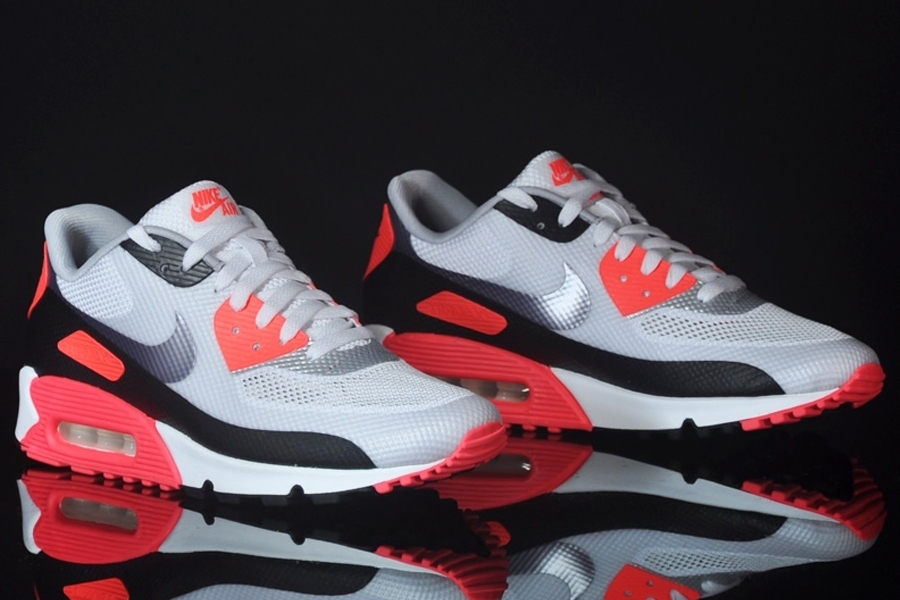 The Air Max 90 Hyperfuse was one of several NSW HYP hybrids launched in 2011. At first, the Infrared colorway was an exclusive gift to CrookedTongues BBQ attendees, but luckily for fans around the world, a wider release arrived the following June. 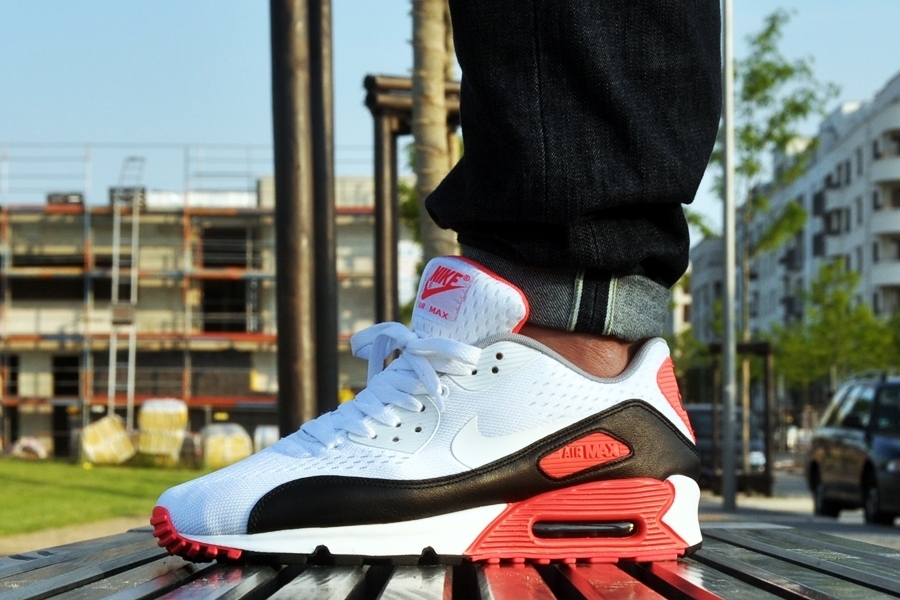 The Air Max 90’s twenty-third year kicked off with a new variation in Nike’s then latest and greatest upper material. The Air Max 90 EM made for arguably the sleekest ‘Infrared’ interpretation yet. 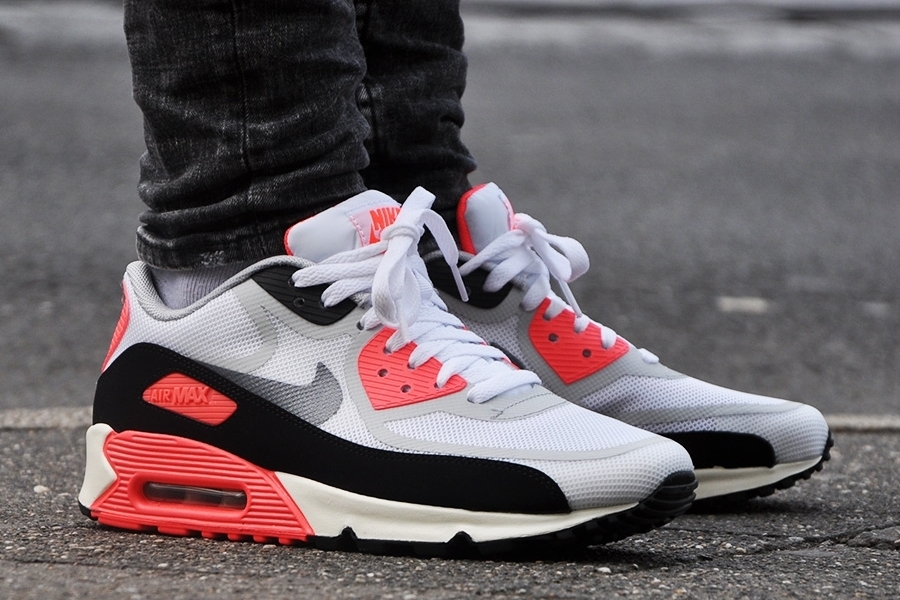 The Air Max 90 Tape debuted last August. This version uses Hyperfuse pressure welding to eliminate seams but uses a more traditional build than the HYP version throughout. It has been absent since other new variations have been introduced; will the Tape go the way of the Current? 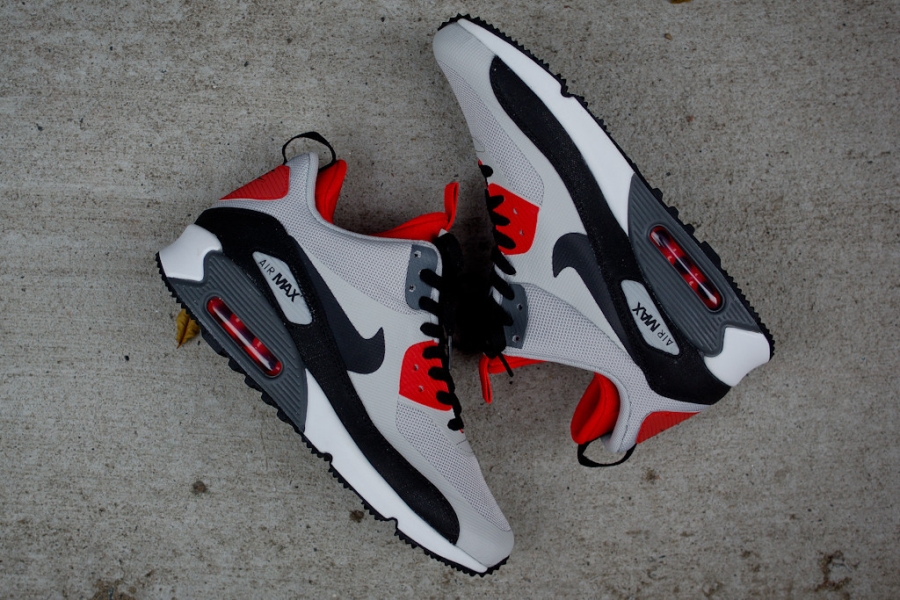 An inclusion that needs an asterisk for sure. One of several Air Max 90 SneakerBoots releasing last winter, these were done in Challenge Red with a familiar layout. People calling them “Infrared” underlines the tendency of any bright red applied to the AM90 to get that kind of a nickname. 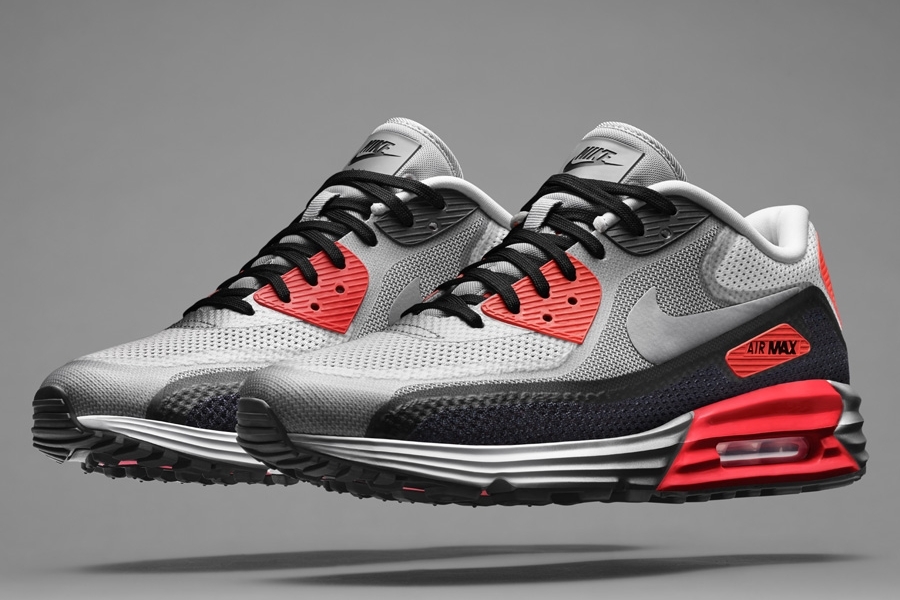 The Air Max 90 Lunar C3.0 hit retailers just before the turn of the year. Its combination of past and present technologies exemplifies Nike Sportswear’s enduring greatness. 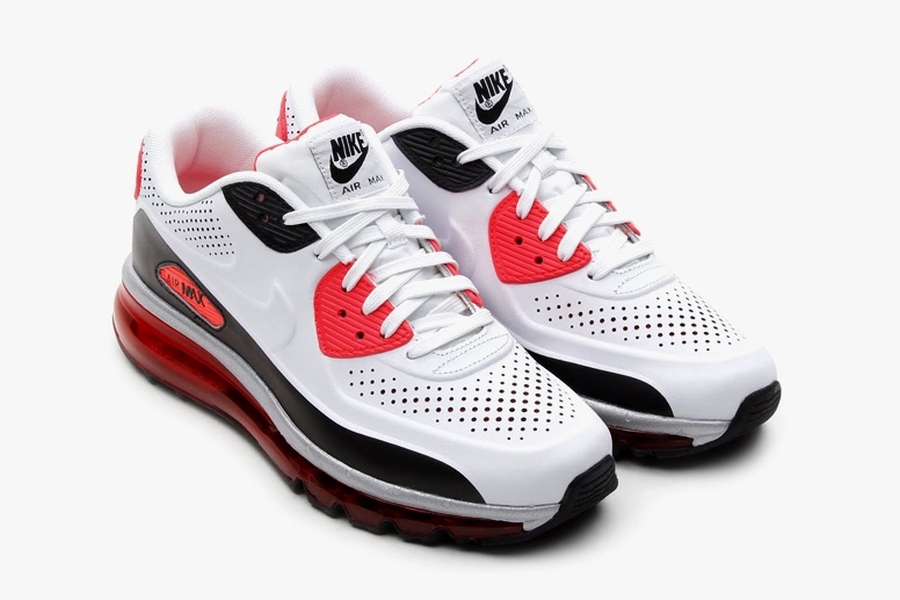 The AM90 gets an updated upper build and a brand new bottom with the latest hybrid offering. The Air Max 90 2014 debuts on Valentine’s Day as a love letter to nearly three decades of Max running. 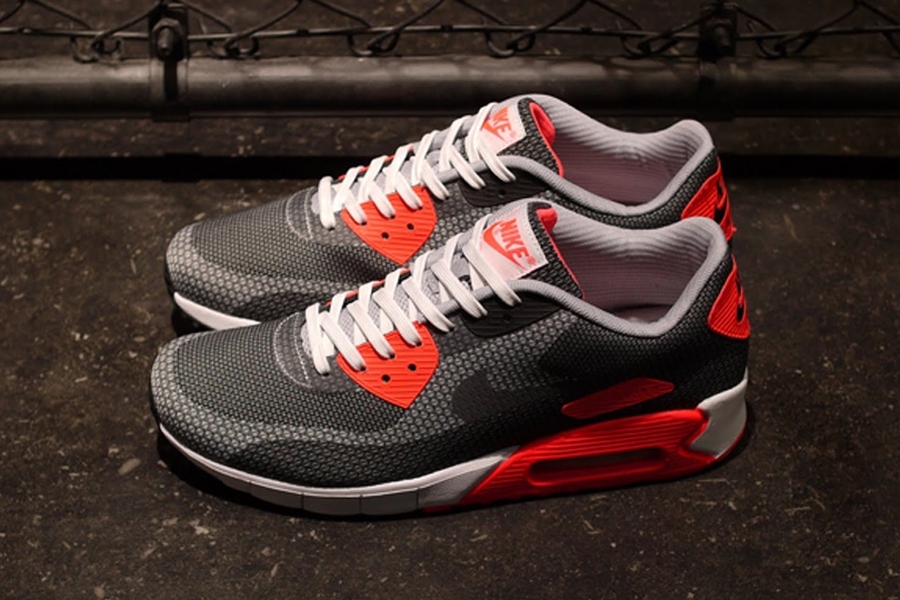 Another inclusion that just barely qualifies on the strength of its colorblocking. The Jacquard approach obscures the original colors a bit as far as the white/grey/black is concerned, but the Infrared is there in all the right places.