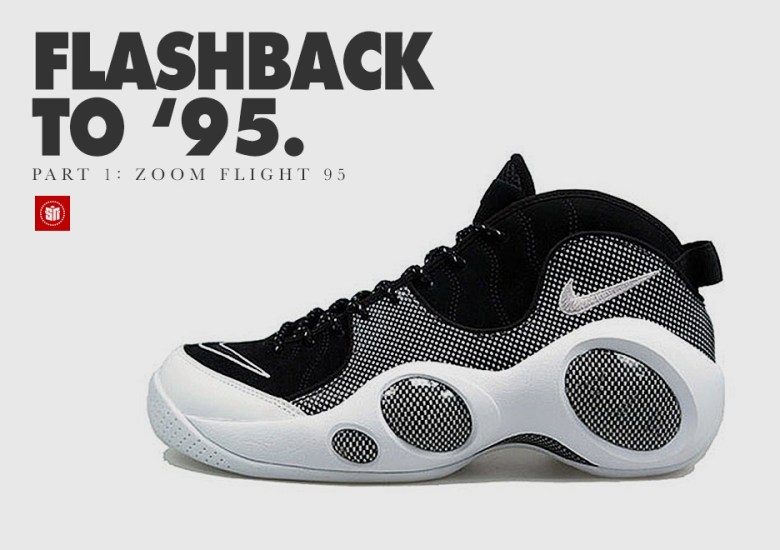 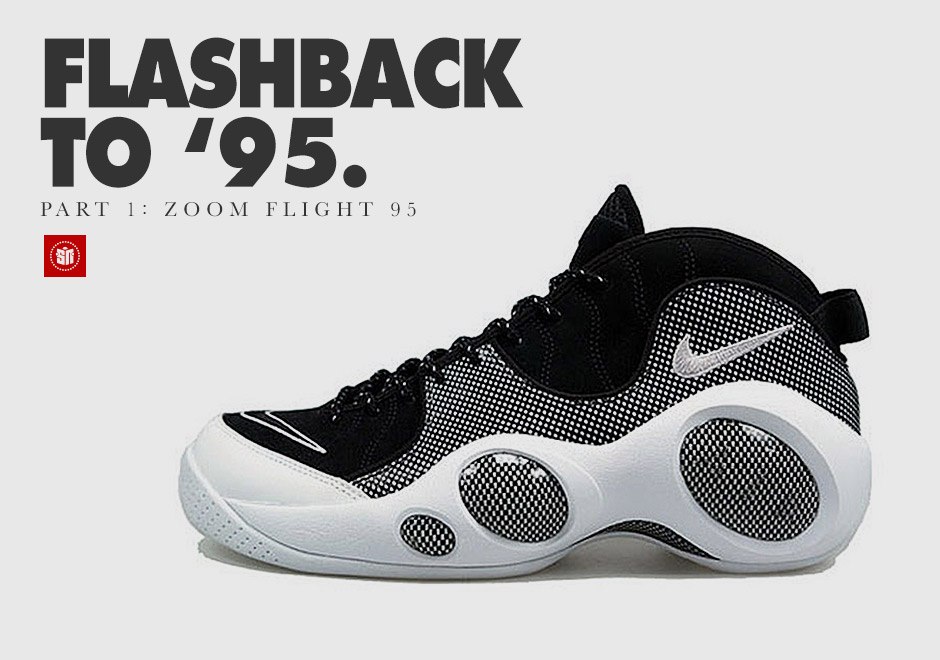 Welcome to the first edition of Flashback to ‘95, our new series that will look back two decades to one of the most jam-packed years of classic sneaker designs ever. Right in the middle of what many consider the “golden age” of athletic footwear design, 1995 was one of the most important years ever for the sneaker world. The Air Max 95, the Air Jordan XI, the FILA Grant Hill, the Reebok Kamikaze, and the Air Penny 1; these are just a few of the iconic sneakers that made their debut in ‘95. We’ll get to some of those sneakers in later editions of this series, but for now we’re going to fittingly start with a shoe that has 1995 right in its name, the Nike Zoom Flight ‘95. Let’s hop in the time machine and head back to 1995 to check out the birth of Zoom Air in the bold design of the Zoom Flight ‘95. 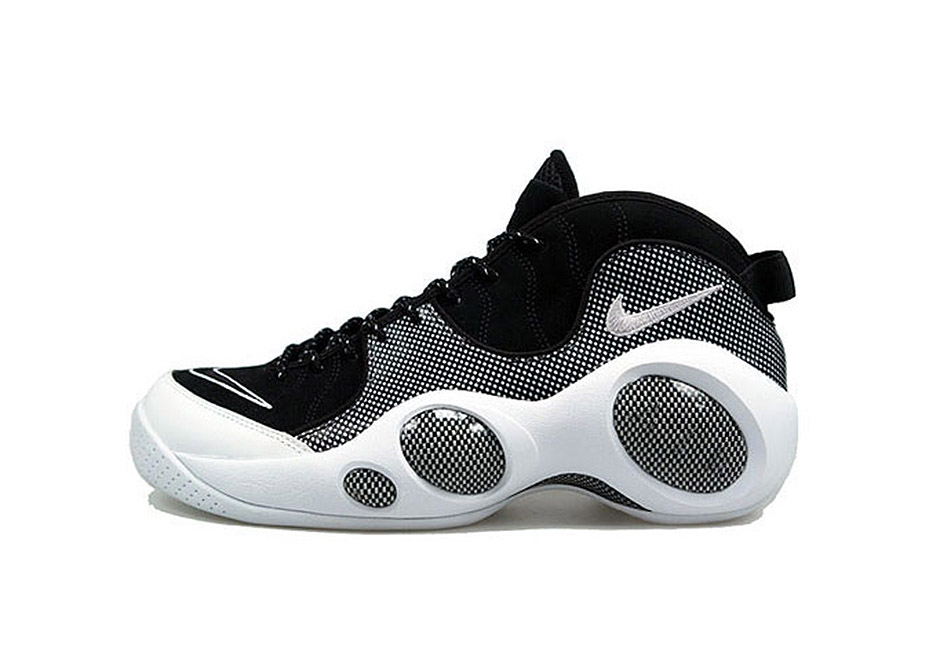 Go back a full twenty years, and you’ll find a shoe that’s still one of the most futuristic looking designs Nike has ever put in a shoe box. We’re talking about the Zoom Flight ‘95, equipped with carbon fiber support on the upper, “bug-eyes” on the sculpted midsole, and most importantly, the introduction of Zoom Air. The shoe’s unprecedented design instantly helped Zoom Air gain the attention of the masses, and set the precedent for Nike’s futuristic design language for years to come.

Actually, Nike’s then-new cushioning technology had been utilized a year earlier in models like the Air Go LWP, as “Tensile Air”, but it wasn’t until 1995 with the debut of the Zoom Flight ‘95 and the Zoom Alpha in running that the catchier name was applied, and the new cushioning system was officially introduced. Two decades later, it’s easy to see that the technology and bold style of the Zoom Flight 95 made it a landmark for Nike basketball, setting the tone for the rest of the decade—and beyond. 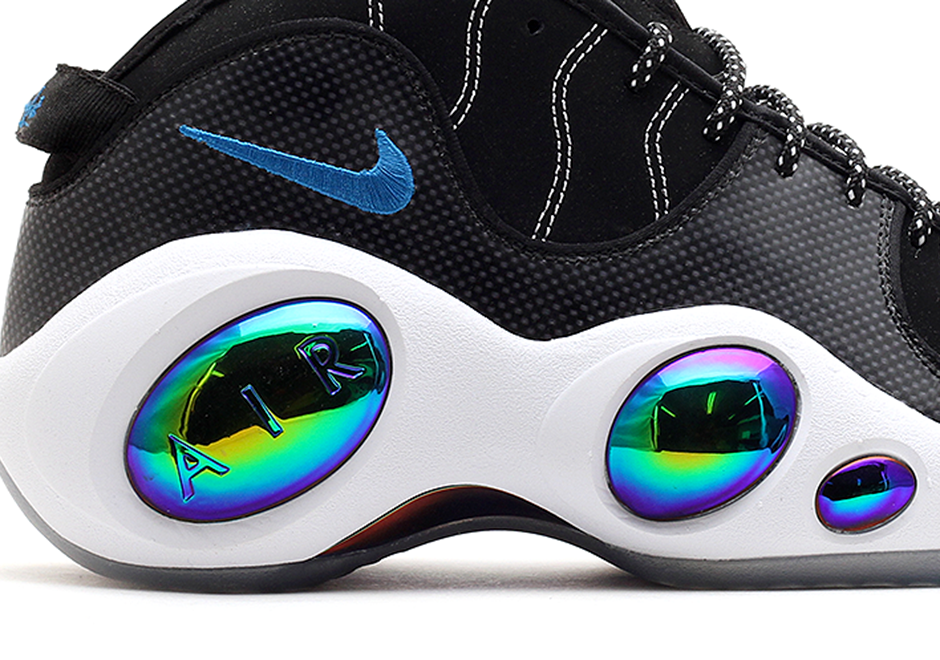 Bug Eyes
The boldest and most distinct design feature of the ZF95 is obviously the large “bug eyes” within the thick midsole of the shoe. There was literally nothing like them in a previous shoe design, so you can imagine what people were thinking the first time they saw the Zoom Flight on the sneaker store shelves. Your own eyes were popping! 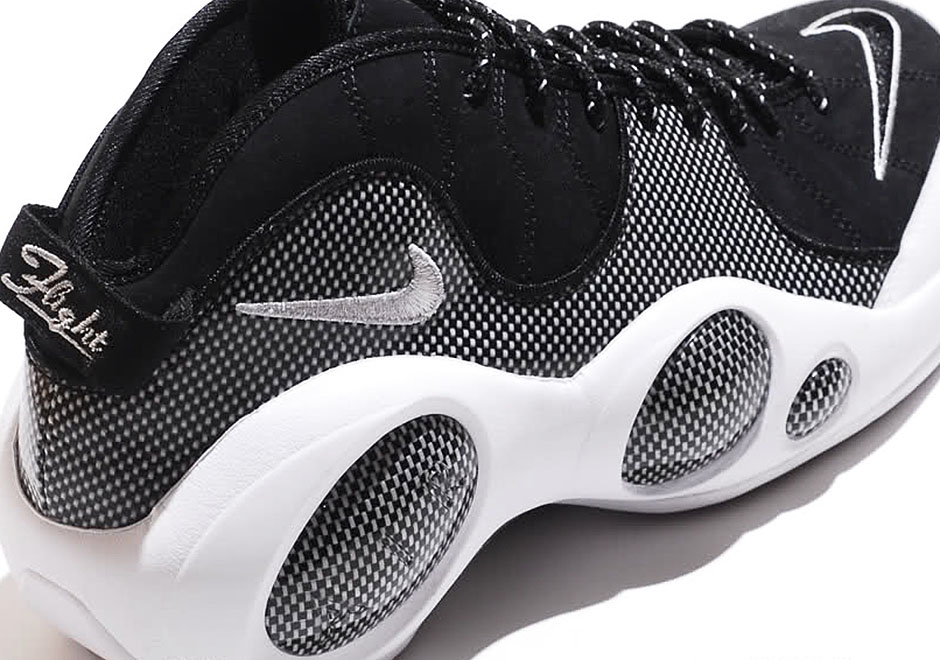 Carbon Fiber
Along with the bug eyes, the other thing you’ll notice about the Zoom Flight ‘95 is the ample use of carbon fiber. Other shoes had used carbon fiber support shanks within the midfoot before it, but the ZF95 was the first to use a thin and flexible carbon fiber paneling on the upper for lightweight support. 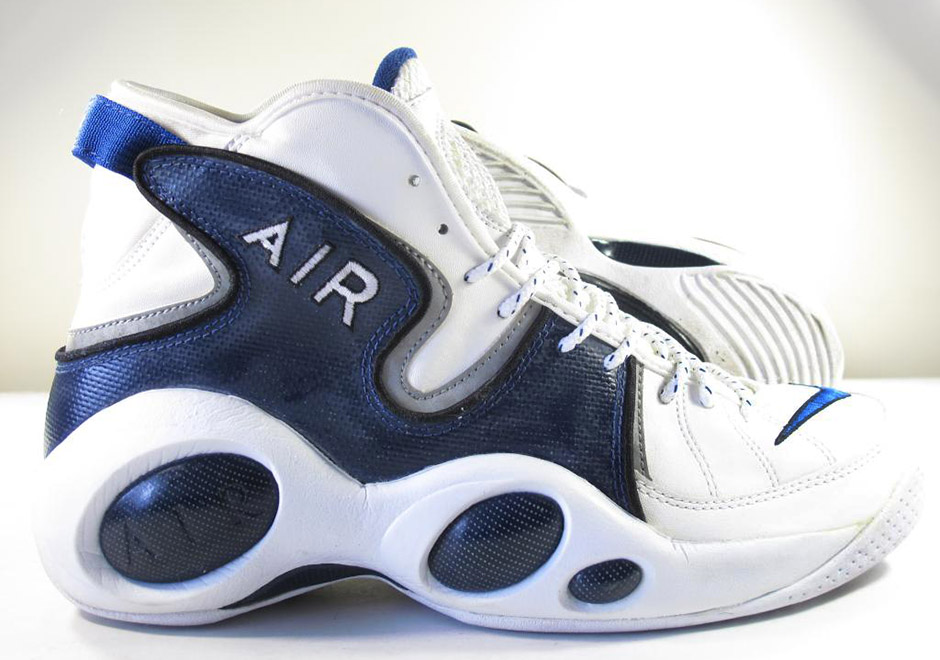 Low and High
Of course you’re familiar with the mid-top Zoom Flight ‘95, but did you know it also originally released in a high-top version? The extended height allowed for more of the carbon fiber support paneling, as well as large “AIR” branding on the ankle. While the mid-top was designed for guards and forwards, the high-top provided a Zoom Air option for the big men. 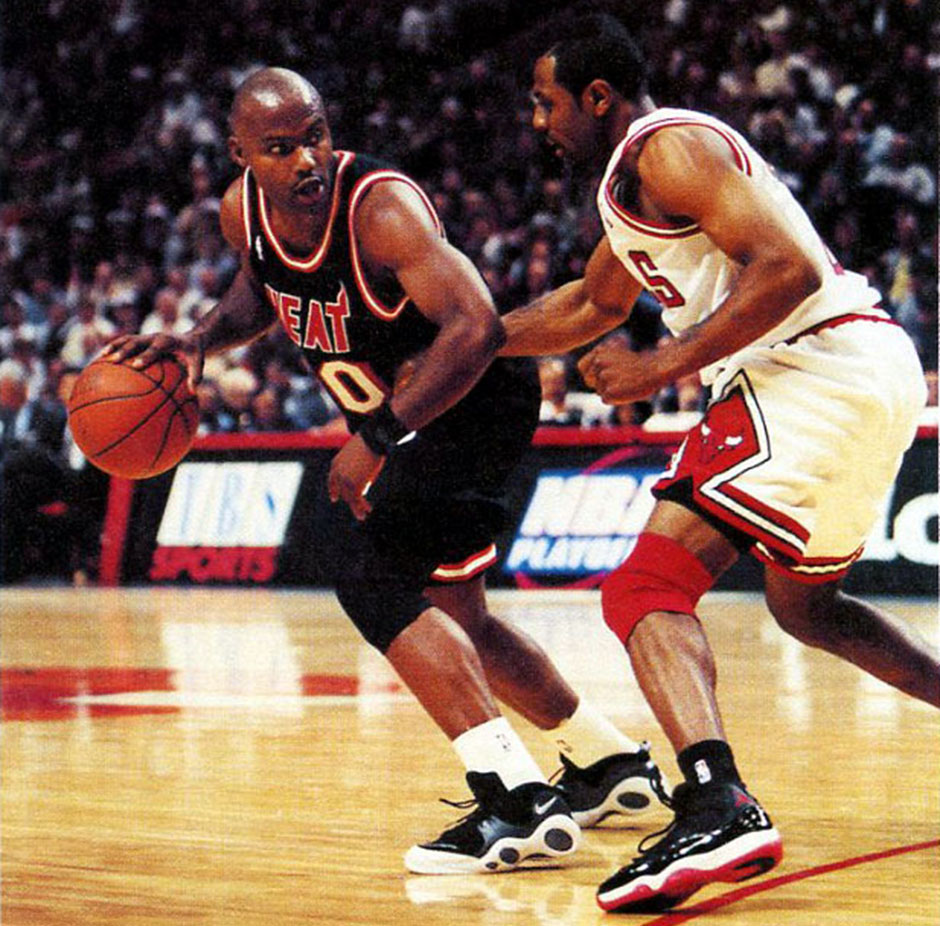 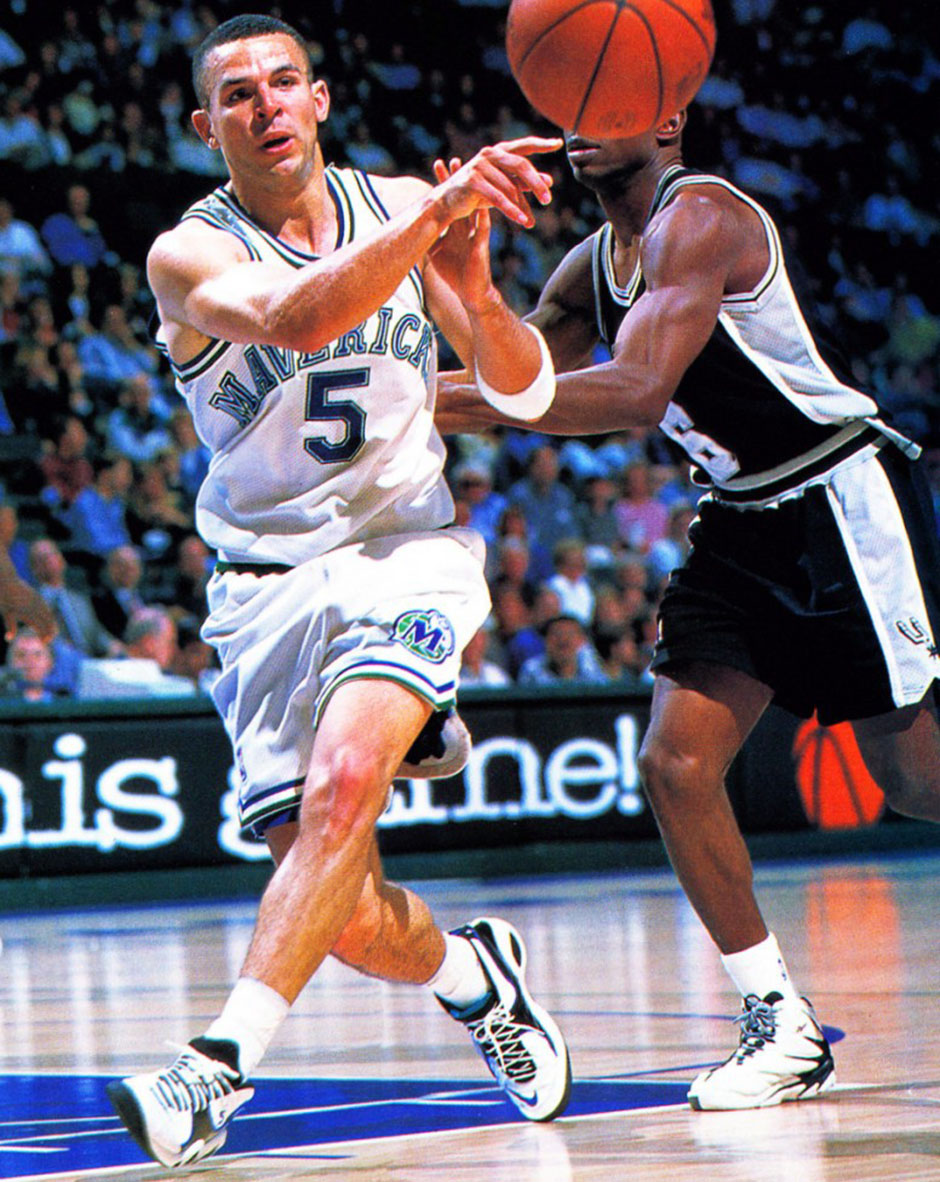 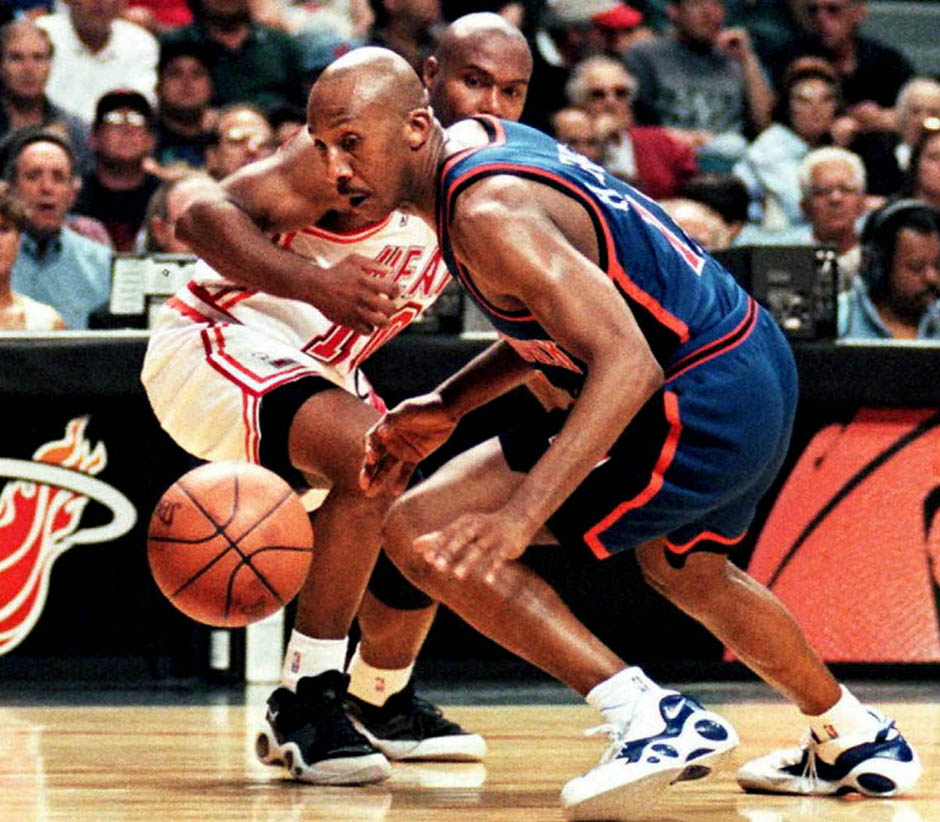 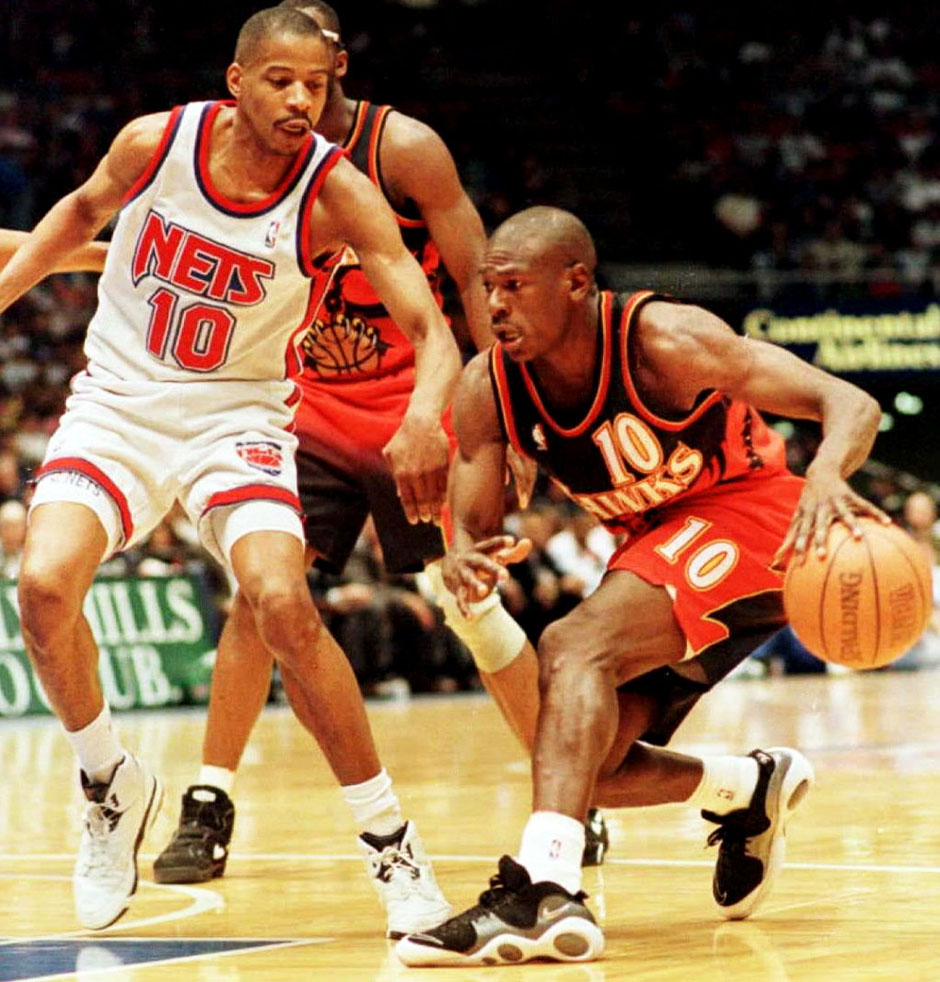 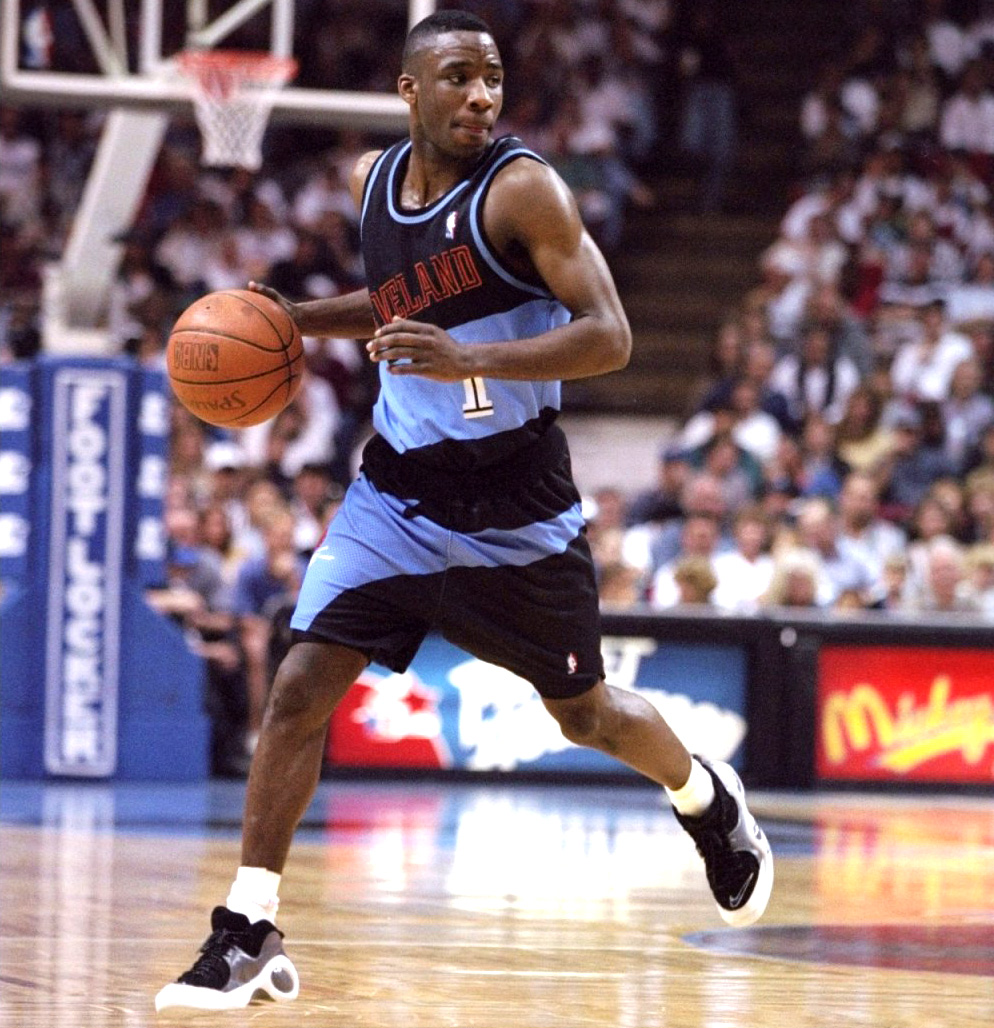 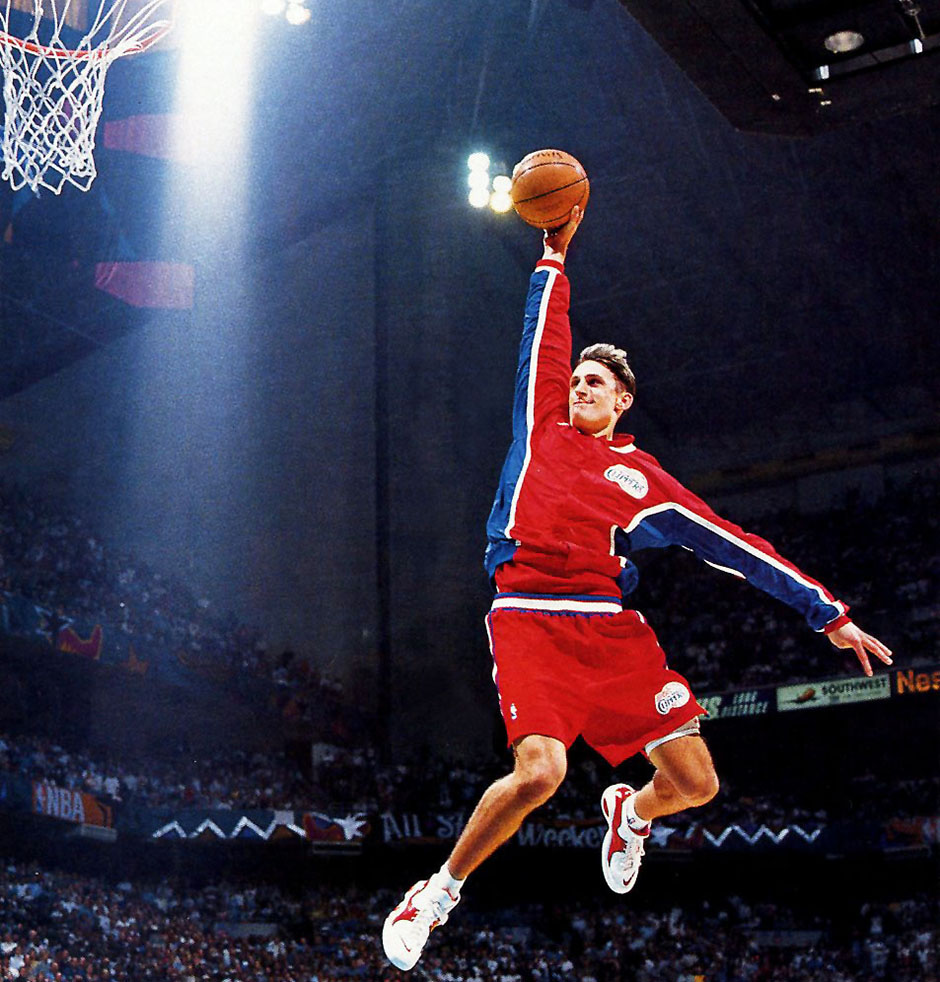 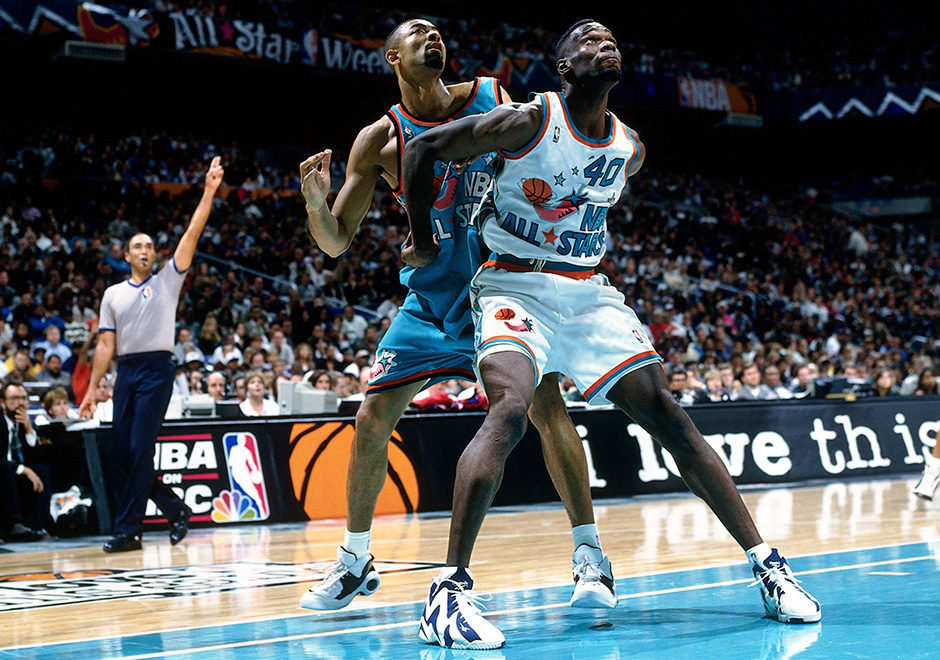 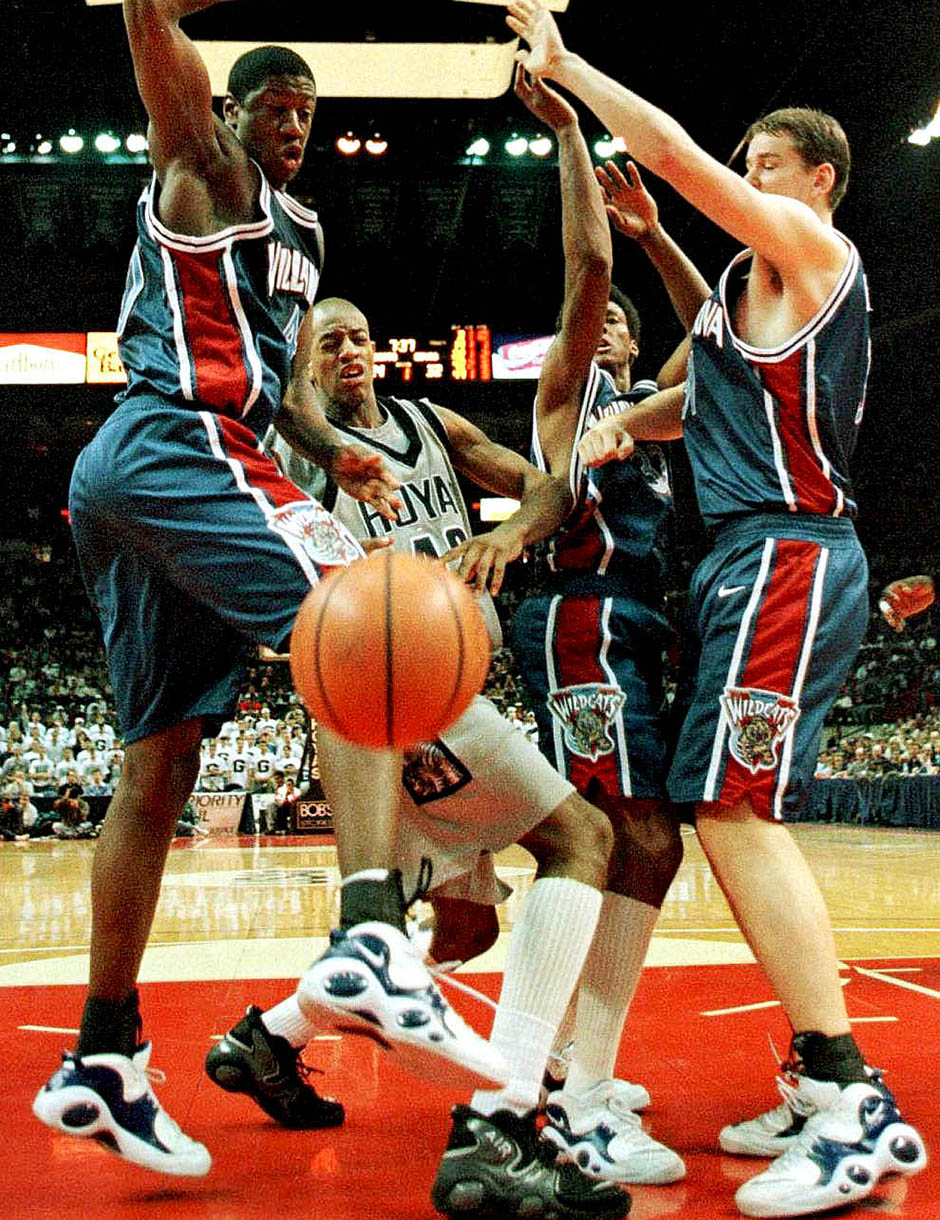 Now check out three classic ads for the Zoom Flight ’95, including one from the iconic “phone number” series. 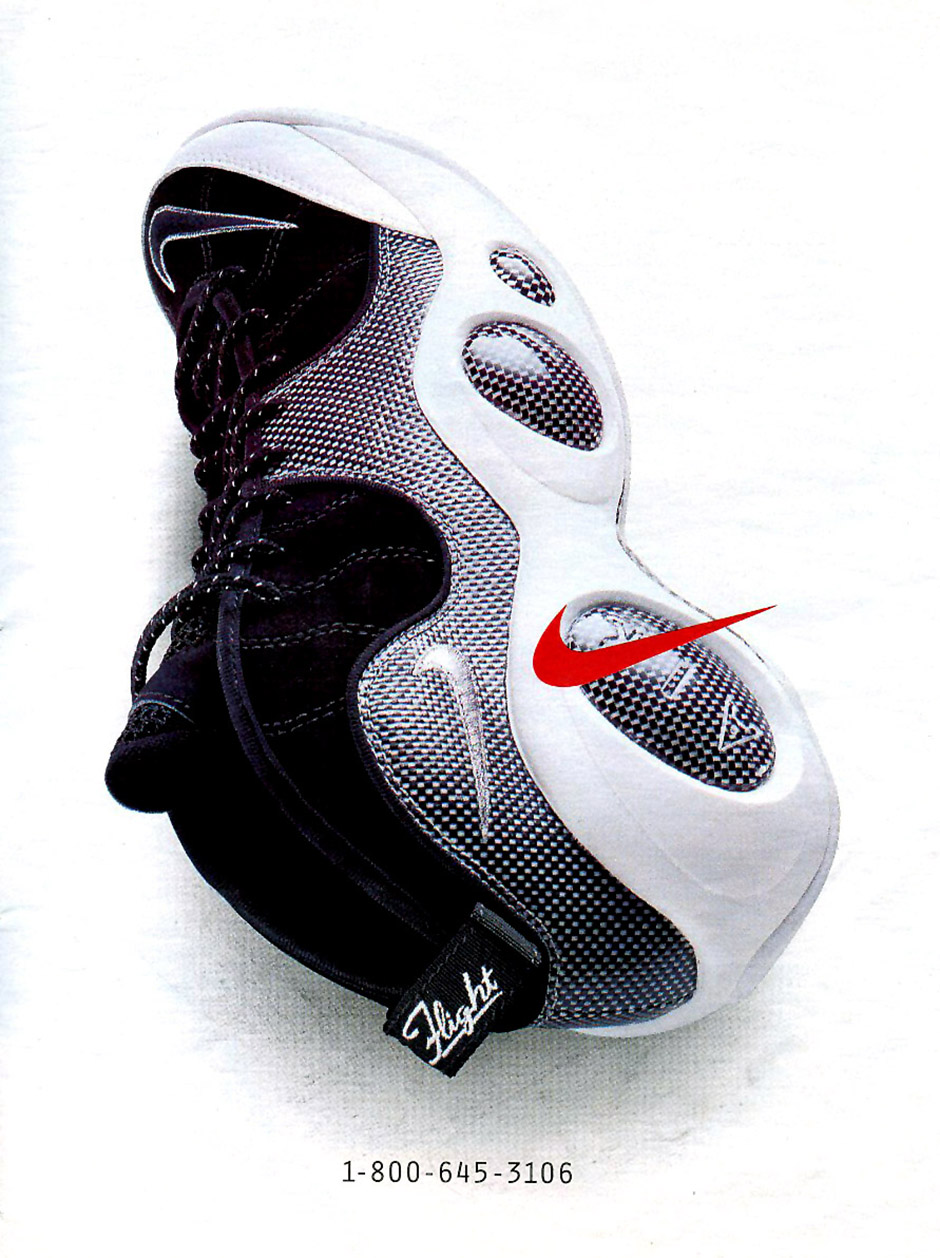 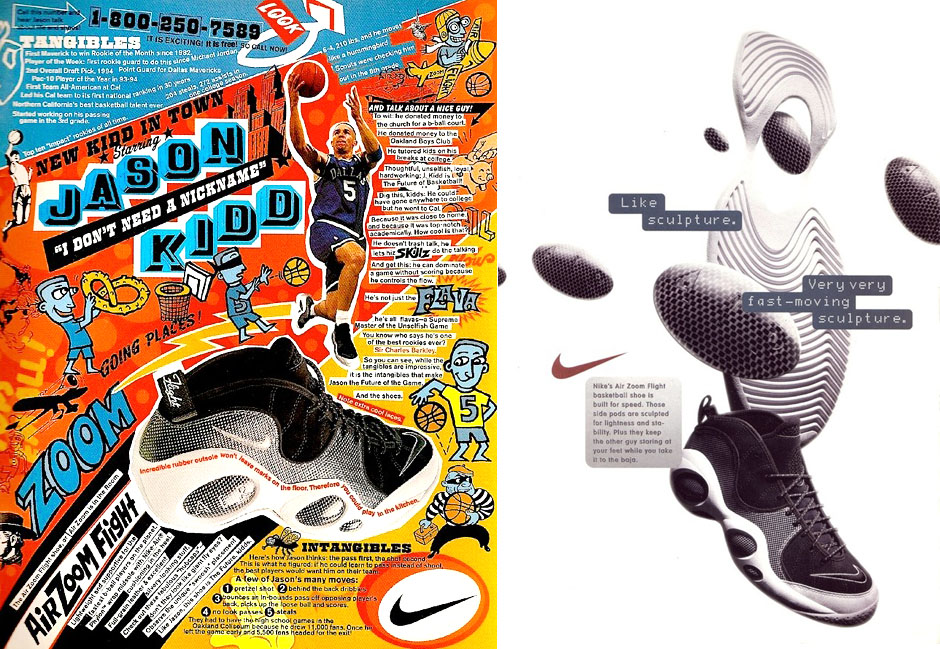 Commercials
If static images aren’t enough for you, now watch a couple of classic Nike commercials featuring the Zoom Flight ‘95.

That ends this trip back to 1995 to take a look at this landmark shoe from one of the very best years ever for the sneaker world. The Zoom Flight ‘95: a shoe so ahead of its time twenty years ago that it will probably still look futuristic another two decades down the road.