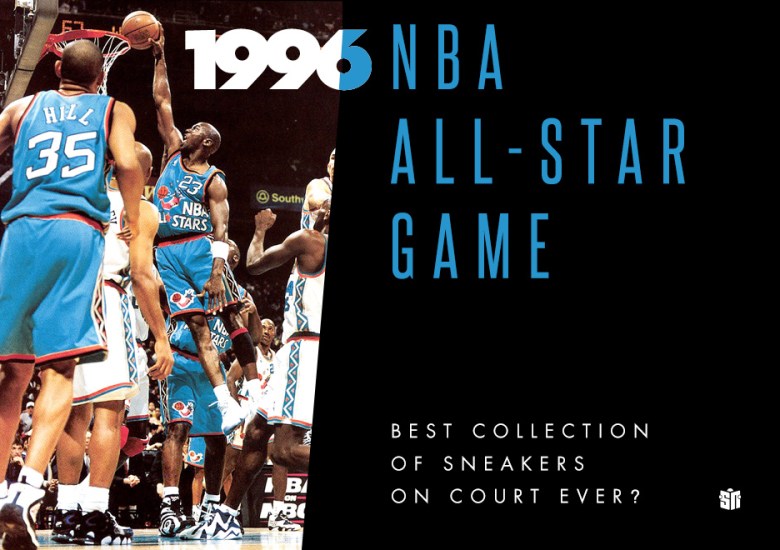 Was the 1996 NBA All-Star Game the Best Collection of Sneakers On Court Ever? 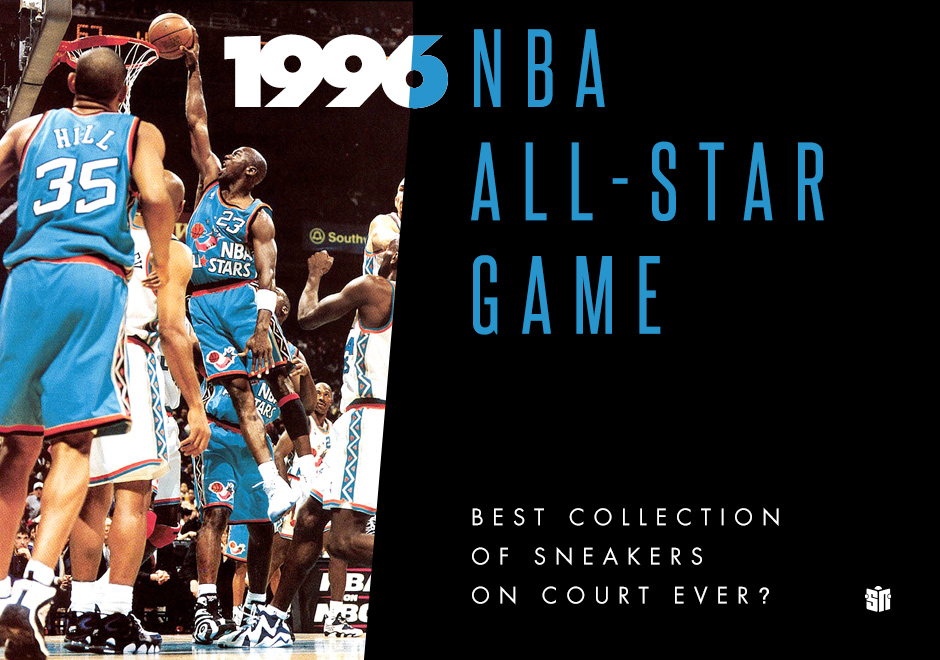 If you know sneakers, you know 1996 was one of the best years ever for basketball shoes. Some of the all-time classics from Air Jordan, Nike, and Reebok were released that year, and this fact is no more evident than when you take a look at the feet on court in the 1996 NBA All-Star game. The night of February 11, 1996 in San Antonio marks what may very well be the greatest collection of kicks in one professional game ever. Of course, the headlining sneaker of the night was the Air Jordan XI “Columbia” worn by the game’s MVP Michael Jordan, but the list only begins there. Some of Nike’s top shoes of the 1995-96 season like the Zoom Flight, Air Max Uptempo, and Air Penny were in attendance, and Reebok classics like the Shaqnosis, Kamikaze II, and the underrated Avant Guard were there to represent the second biggest brand of the time. You could also spot some interesting obscurities in the ‘96 All-Star game, with random sneakers like Glen Rice’s Warner Brothers (yeah, that Warner Brothers) signature shoes, Karl Malone’s LA Gears, and Hakeem Olajuwon’s Spaldings to mix things up nicely.

To illustrate the absurd amount of heat on court that night, we collected as many high-res photos from the game as we could, letting you decide for yourself if this was the best collection of basketball shoes ever on the court. You be the judge, but even twenty years later, it should prove hard to think of a game played in the NBA with a more impressive display of sneakers.

The game’s MVP Michael Jordan wore what most will also consider the most valuable shoe of the night, the “Columbia” Air Jordan XI. 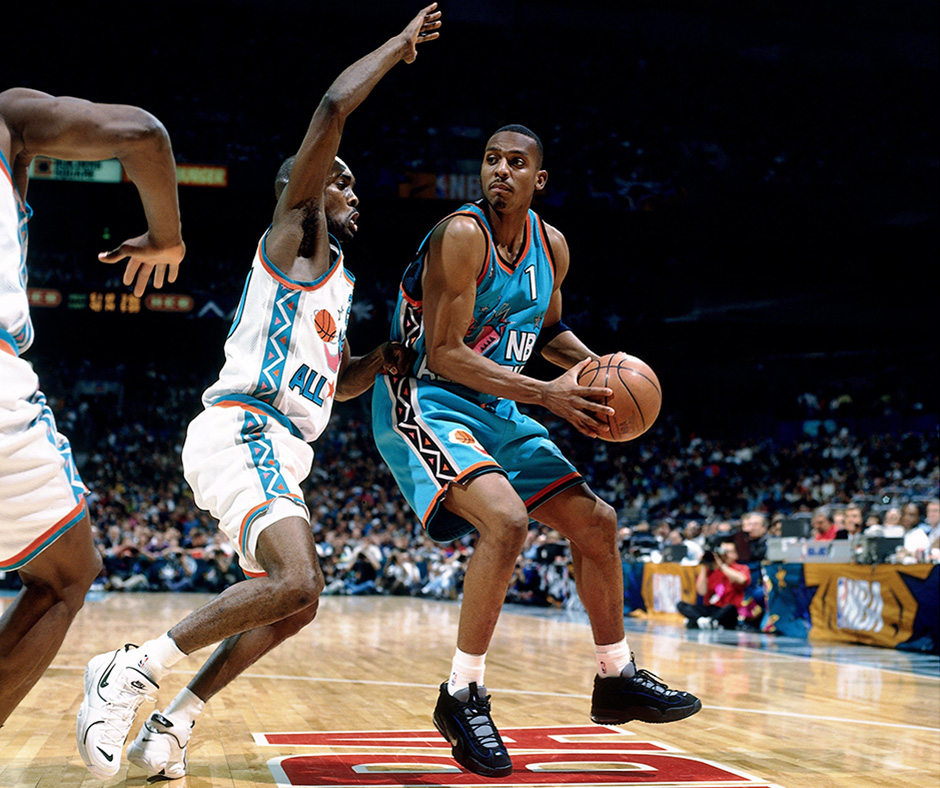 The East’s rising superstar Penny Hardaway laced up his Nike Air Penny in the black colorway for the first time in the All-Star game (he’d later where them in the ’96 Playoffs), and Gary Payton wore the Nike Air Thrill Flight, a takedown of the Zoom Flight ’95. 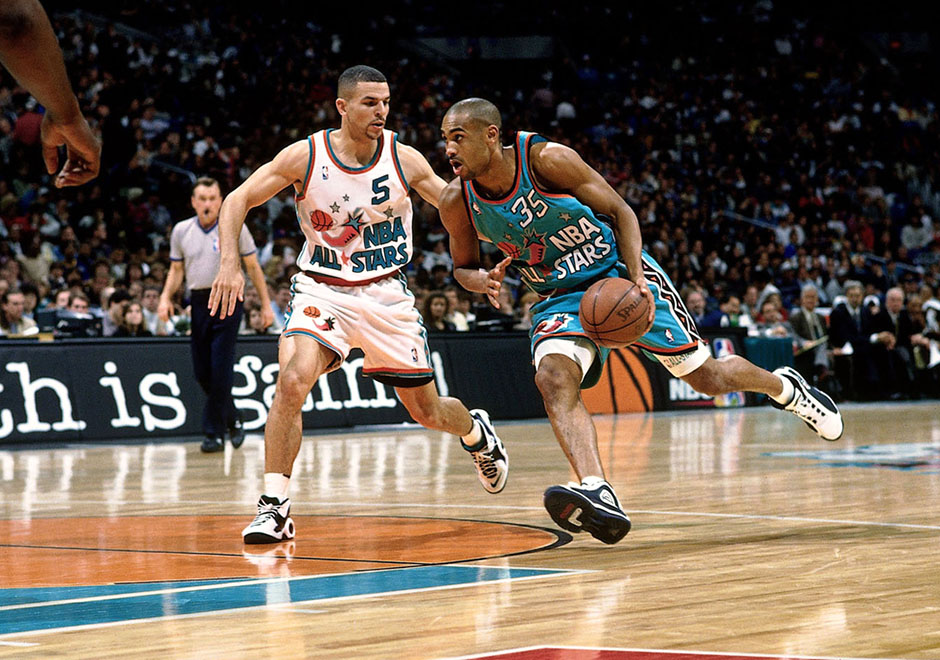 Speaking of the Zoom Flight ’95, the shoe was still in heavy rotation for many pros in 1996, like Jason Kidd seen here wearing a PE pair. Juwan Howard, Sean Elliott, and Terrell Brandon also laced them up for the All-Star game. Here J-Kidd guards Grant Hill wearing his FILA GH2.

The big men battled down low in more awesome sneakers. From left to right: David Robinson in the Nike Air Max 2 Strong, Patrick Ewing in the Ewing Empire, Charles Barkley in his Nike Air Max CB34, and Shaquille O’Neal in the Reebok Shaqnosis. 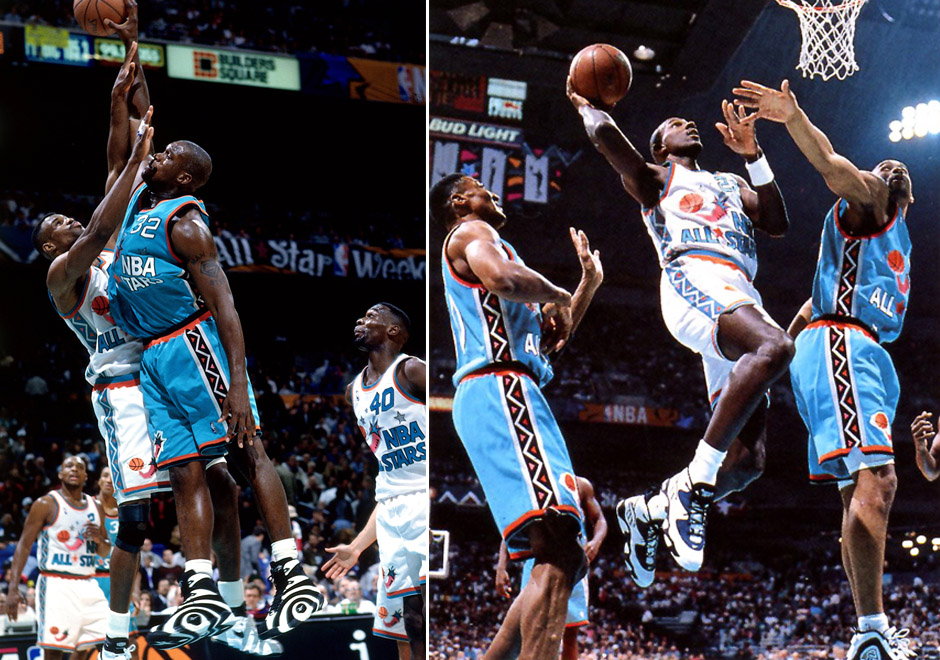 Reebok was represented well in the ’96 All-Star game, with some of the brand’s coolest hoops shoes ever. Here we see Shaq in the Shaqnosis again, along with Clyde Drexler in the Reebok Avant Guard. Below is Shawn Kemp throwing it down in his Reebok Kamikaze II. 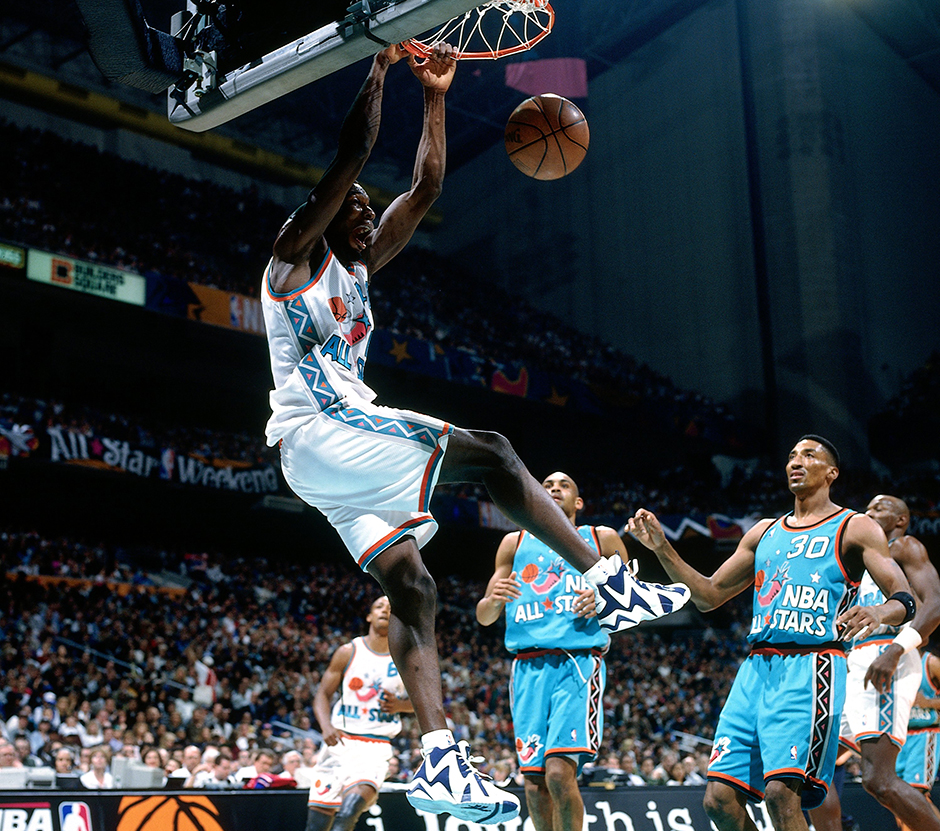 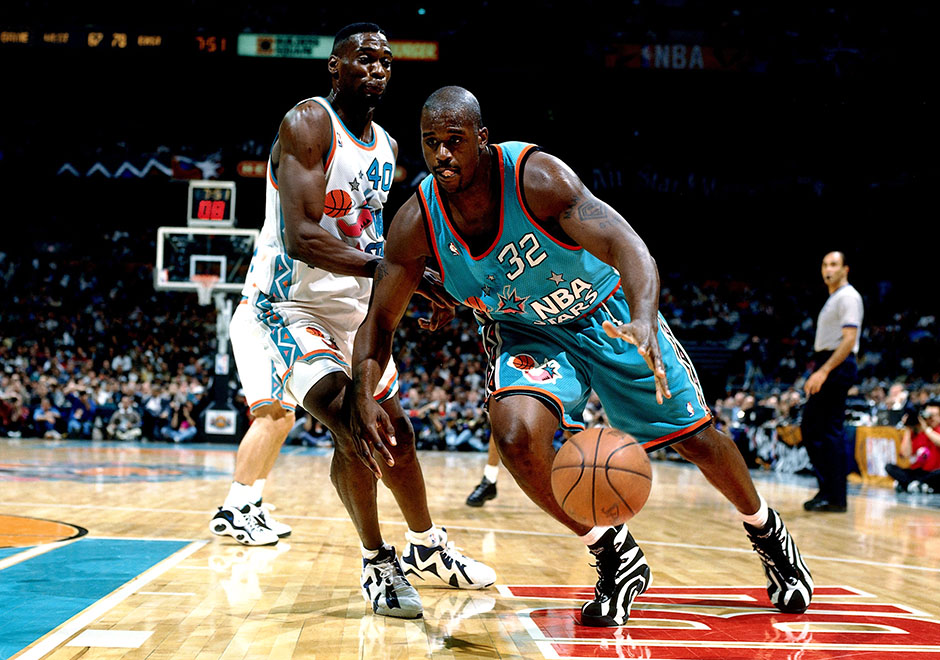 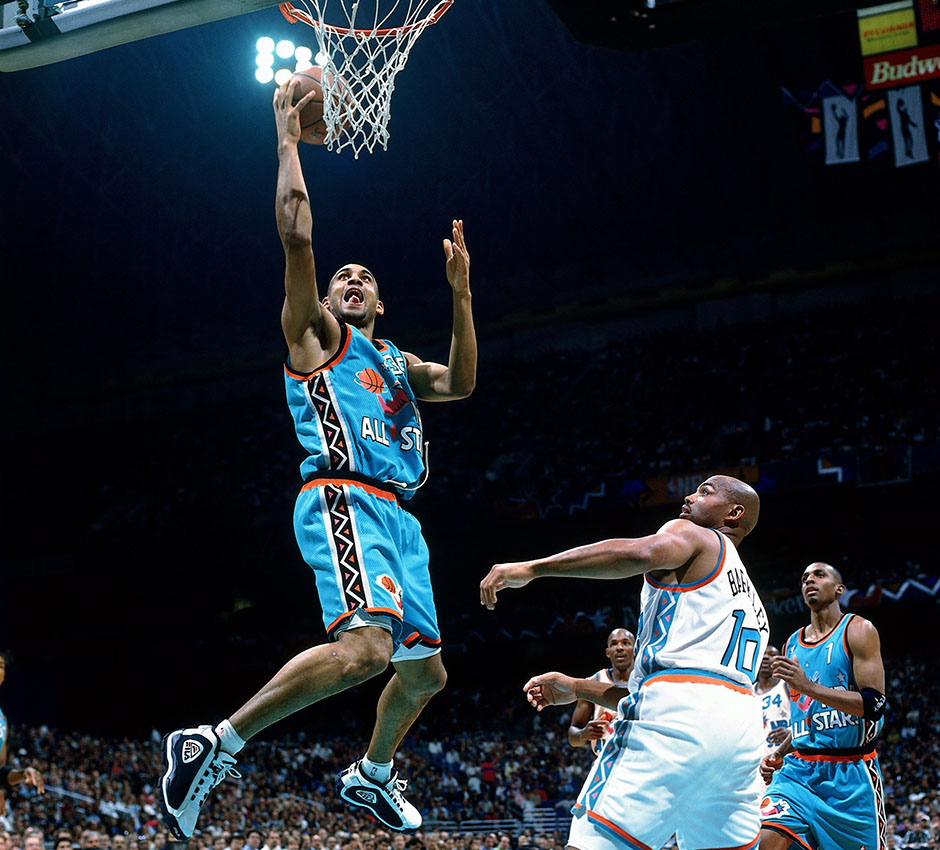 Grant Hill was one of basketball’s biggest stars in 1996—he actually led All-Star voting, even beating out MJ—and his second FILA signature model was one of the hottest selling shoes of the year. 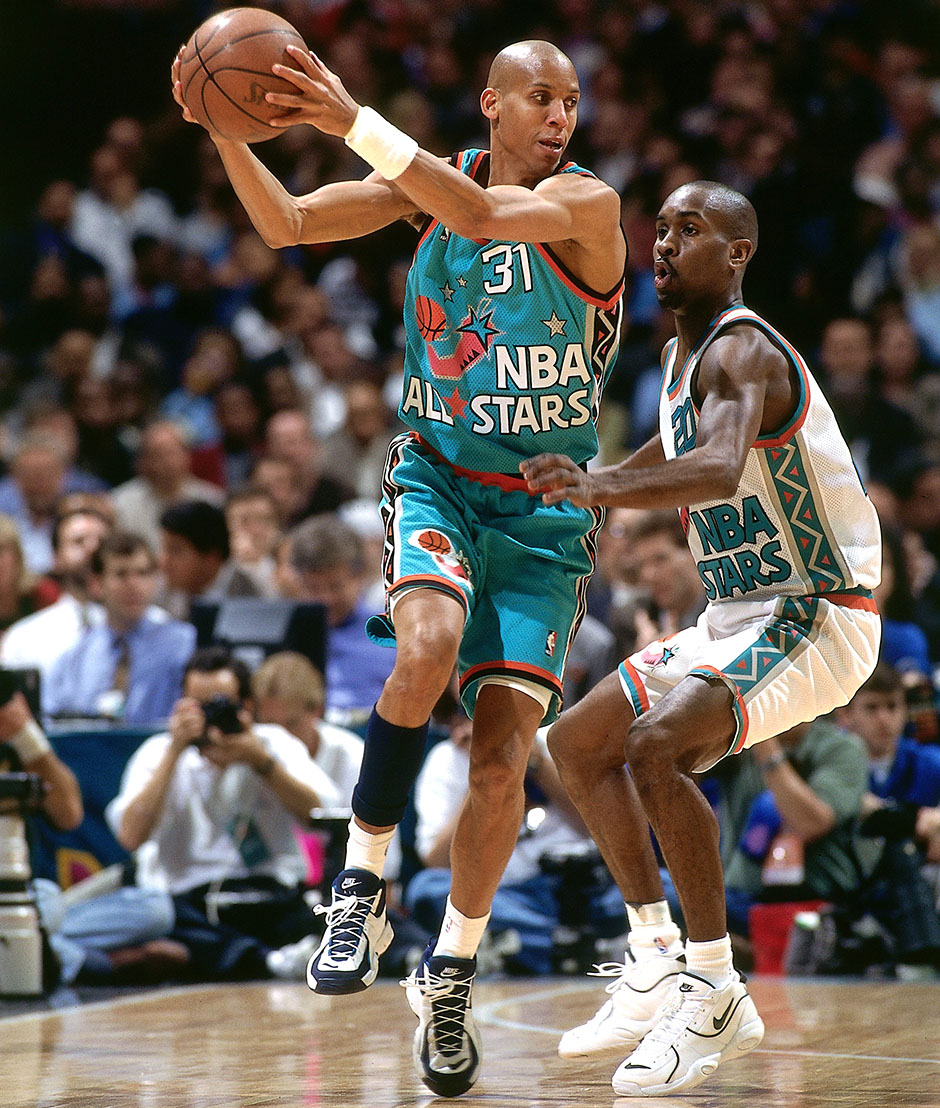 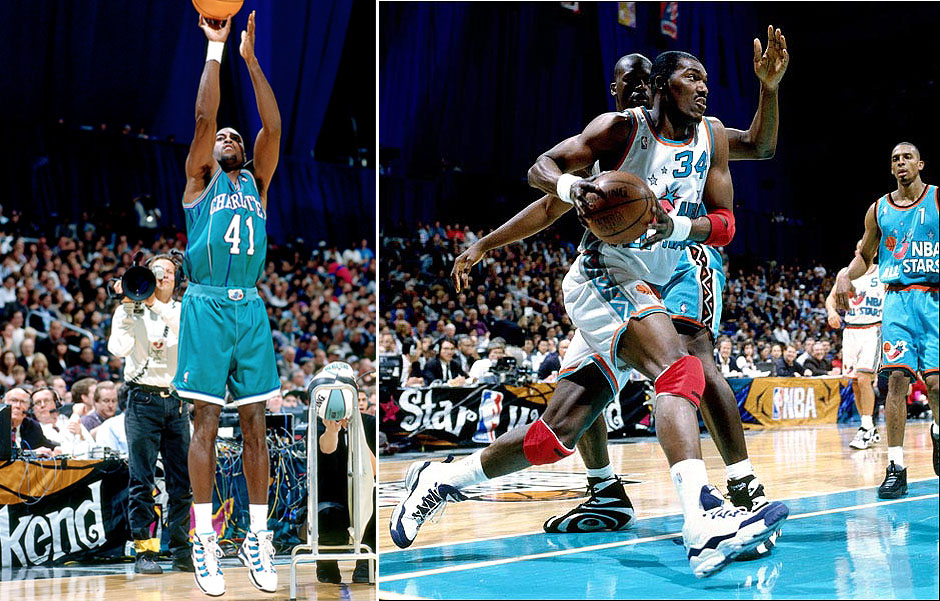 Back in 1996 Nike and adidas hadn’t completely taken over the NBA, and there were still some random brands on the court. Even a few All-Stars were lacing up obscure brands, with Glen Rice wearing a Warner Brothers Sport shoe (pictured here in the 3-Point contest, but he also wore them in the game), and Hakeem Olajuwon in one of his Spalding signature shoes. Unfortunately, we couldn’t find a good shot of Karl Malone in his LA Gear shoe. 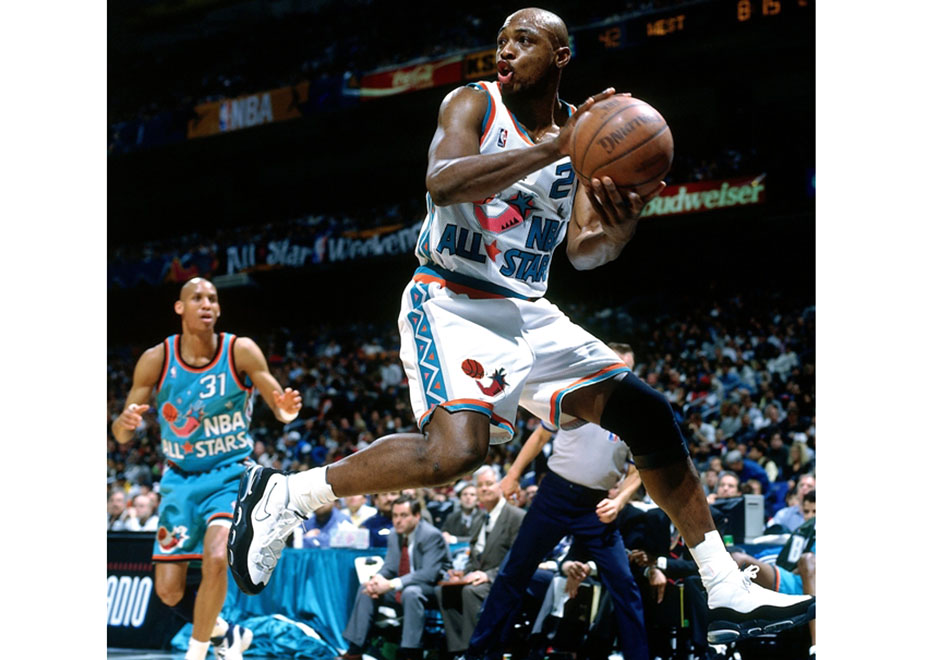 Here’s some more MJ, and John Stockton in the Nike Air Up. We wrap things up below with a shot of the entire East squad. 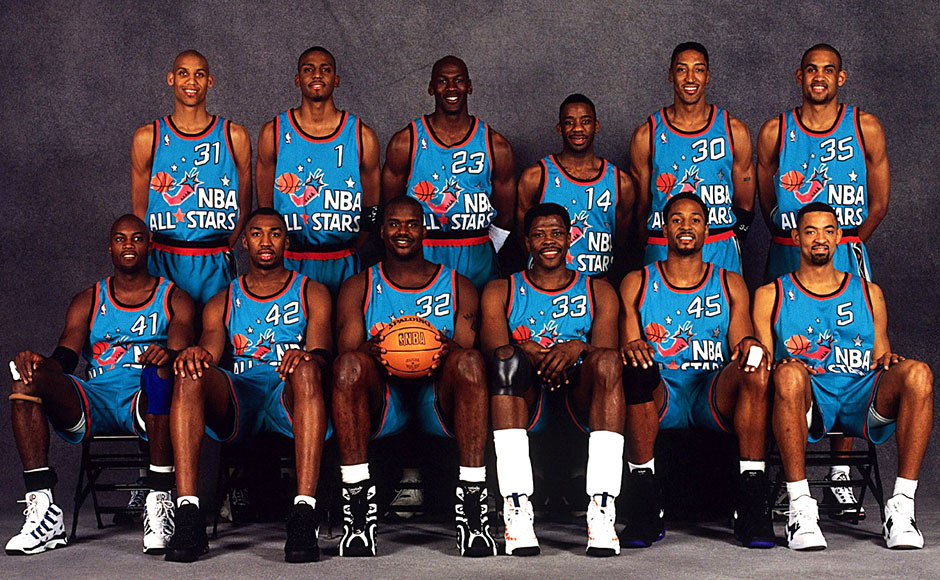 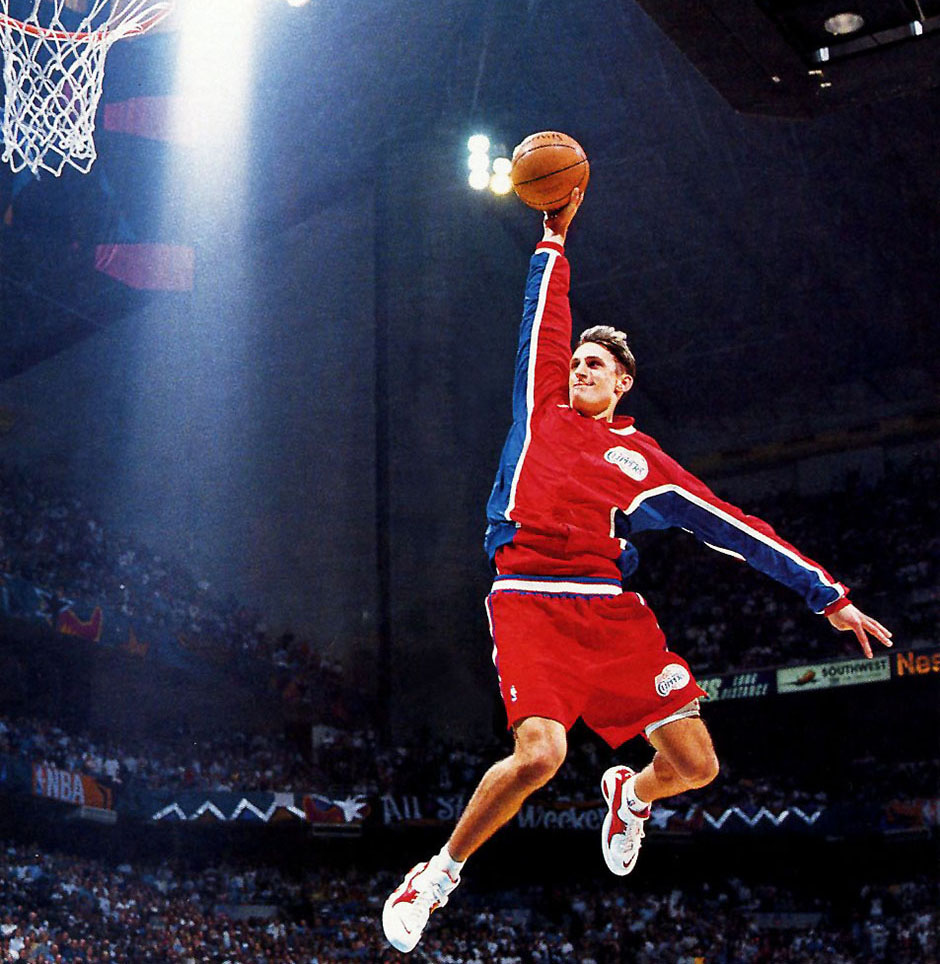