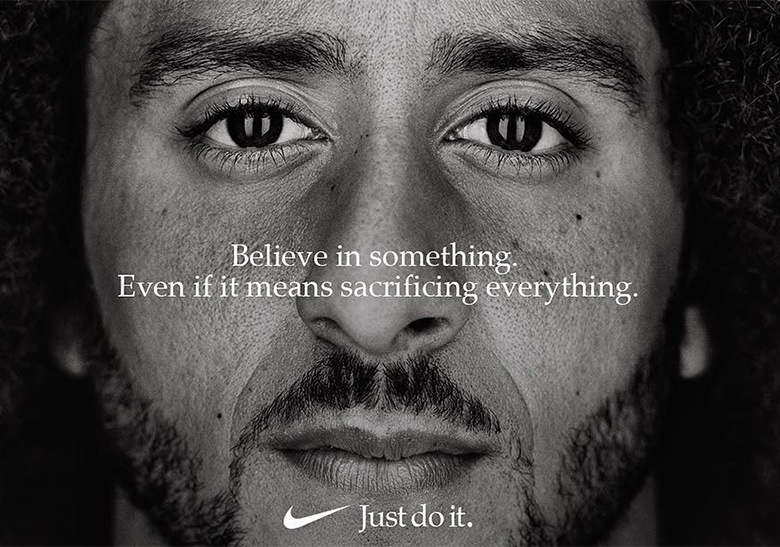 Colin Kaepernick Featured In Nike “Just Do It” Ad

2018 marks the 30th anniversary of Nike’s iconic “Just Do It,” an iconic tagline created by marketing agency and long-time brand partner Wieden+Kennedy. Nike has pulled no punches when it comes to promoting their powerful slogan as they’ve released a plethora of classic kicks adorned in vintage colors and themes, from the Air Max 97 to the Air Force 1. Their recent apparel has also heavily featured “Just Do It” hits. However, nothing they’ve done to usher in the saying’s fourth decade has commanded as much attention and precipitated as much discussion as their newest ad, featuring former San Francisco 49ers quarterback and social justice activist Colin Kaepernick.

The current issue surrounding the NFL’s national anthem policy and the swath of players who choose to kneel, raise a fist, or simply stay in the locker room while the anthem is played was started by Kaepernick, who first opted to take a knee during the pre-game anthem in 2016 to protest police brutality. This astonishing move caused a great deal of controversy as supporters lauded the quarterback for his bravery and outspokenness, while detractors derided him for disrespecting the military and taking focus away from the game. Although the University of Nevada product has been out of professional football for more than two years, his presence has loomed over the league as players from all thirty teams displayed their own form of quiet protest. With Nike’s newest ad campaign — and Kaepernick attempting to sue the NFL for collusion — it’s arguably more grand and imposing than ever.

It’s an incredibly bold move for a company the size of Nike — who is the NFL’s official uniform provider — to take such a pronounced stance on a political conversation deeply rooted in American politics, especially one that raises so many emotions. The brand hasn’t shied away from other issues; they are proud supporters of the LGBT community, and over the last year or so a miniature exodus of employees occurred after internal investigations revealed unfair practices. Simply put, Nike isn’t afraid to take a stance, even when the stakes are high.

If Nike’s advertisement with Kaepernick proves anything, it’s that the cultural impact of sports is still as strong as ever. Although fashion designers, musicians, and celebrities seem to have a more trendy influence than athletes do, Nike’s Kaepernick ad campaign proves that the root of their brand will always be sport. And although you’ve likely got a pointed and heartfelt opinion about the advertisement one way or the other, there’s one thing you can’t deny: you won’t forget “Just Do It” for another thirty years.