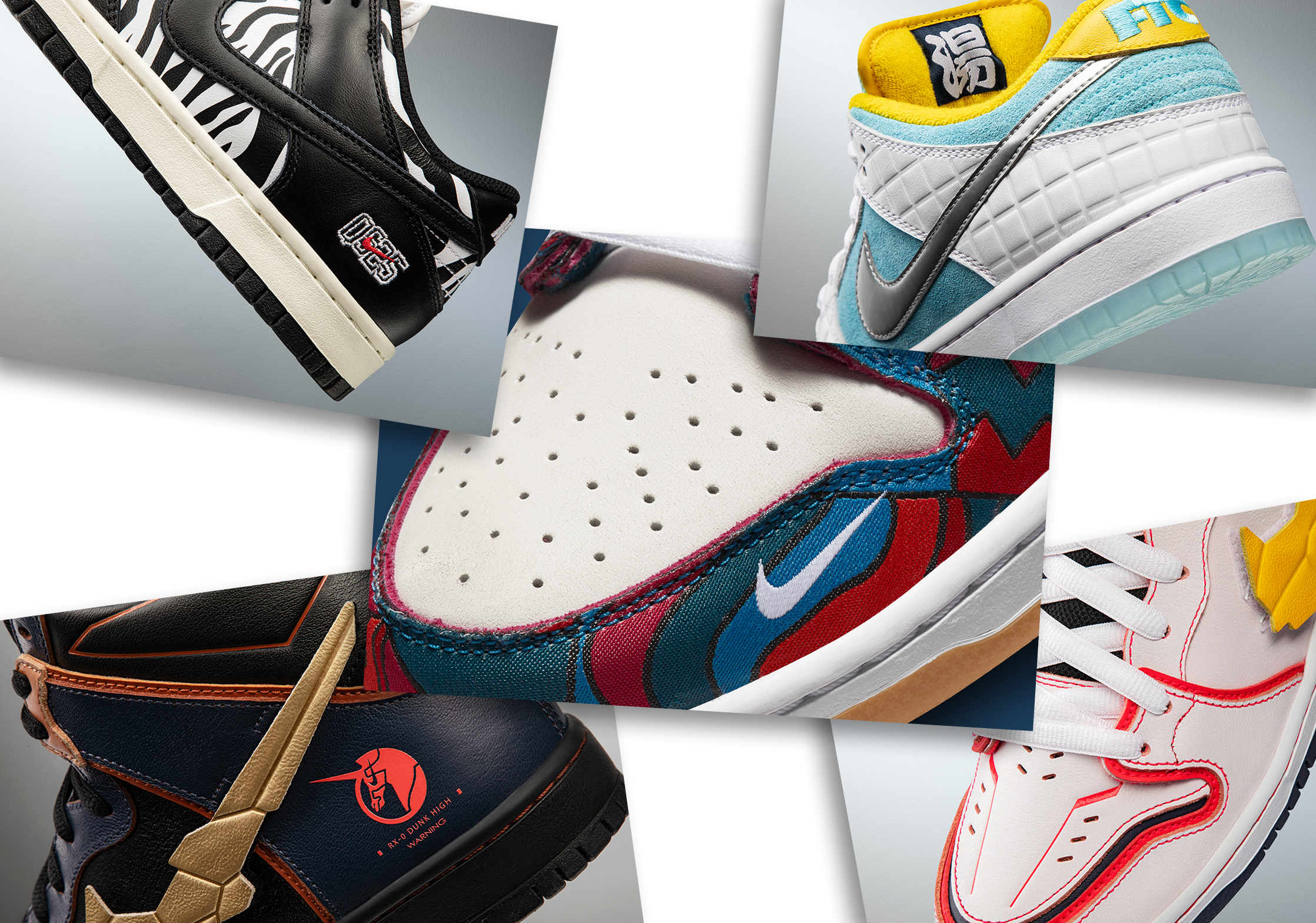 Skateboarding has taken modern day culture by storm. Not only is it among the most popular sports for youths to dabble in (particularly during the social distancing period of the last year and change), but it’s served as an unexpected source of inspiration to the world of high fashion and big budget industry. Whether it be in dingy skateparks to the most manicured of runway sets, skate hasn’t shown any signs of slowing down as business sectors ranging from clothing to media are clamoring to collaborate with the key movers in the skate scene. It’s no surprise that this resurgence of skateboarding over the last few years has coincided with the meteoric revival and rise of the SB Dunk, and as skating enters its first-ever Olympic Games recognition, Nike is ready to deliver its most prized possession – the SB Dunk – in four can’t-miss collaborations.


Scheduled to release leading up to the Tokyo Games, Nike SB has four collaborations ready to roll, with each tied closely to Japan’s storied culture or with the sport in general. Piet Parra brings the artistic point of view as he delivers official competition gear for Nike’s athletes to wear, while FTC and Quartersnacks bring the core skate POV to their designs. A partnership with Gundam, one of the most iconic Japanese franchises, celebrates true landmarks of creative media that is still relevant today. Preview all four below and stay tuned for additional details.

One of Nike’s longest-tenured creative partners and collaborators is none other than Piet Parra, the Dutch artist that received an infinite stamp of approval from sneakerheads for his grail-status Air Max 1 “Amsterdam” in 2005. Recognized for his abstract style and signature palette that leans on berry reds and vivid teal hues, Parra and Nike SB linked up for their first-ever collaboration in 2019 and is again tapped in 2021 to help magnify the significance of skateboarding in the Olympic Games.

In addition to designing the Federation kits to be worn by Nike athletes representing a variety of countries, Piet was also tasked with creating an SB Dunk Low to coordinate with the threads. The geometric landscapes are weaved into the overlays, contrasted by a white leather base and a gum outsole – a favorite among skaters.

Acting as a righteous homage to Japanese toy culture and its influence on the global industry is this collaboration with Bandai’s Gundam, the mecha-based franchise that has produced various anime, toys, books, and other bits of cultural ephemera. Portrayed via two Dunk Highs, Nike SB adds a number of exterior decals and logos, similar to how children and skaters apply stickers to their own toys and skateboards, respectively. Interchangeable Swooshes also represent the transformative abilities of the Gundam manned robots.

NYC-based Quartersnacks has been a pivotal resource for skaters since it first began operation in 2005. Widely considered to be at the forefront of deliver authentic skate culture to those willing to read, Quartersnacks has developed a long-standing relationship with Nike SB that culminated in an SB Dunk collaboration back in 2014. For the 2021 Olympics, Nike SB dialed them up once again, and this time they’ve taken it a step further by adding key visual elements to express their backstory that only core skaters will understand.


Featuring a classic combination of white, black, and red, Quartersnacks applies a zebra pattern on the toe-box and mid-panel, ostensibly calling out Little Debbie’s Zebra Cakes – a favorite for on-the-go skaters who have little time for meals between skate sessions. Nodding to their NYC roots is a heel logo that remixes the iconic Nike NYC logo created by John Jay.

San Francisco’s FTC is no stranger to the culture and business of skating. Originally establishehd in 1986, FTC opened its first doors in San Francisco in 1994, readily providing the local community with a humble yet growing assortment of products. Certainly no stranger to Nike SB collabs, they actually served as a key retail partner for the historic Grateful Dead collaboration as they were the exclusive carrier of the ultra-rare orange colorway.


For the 2021 Olympics, FTC delivers a Nike SB Dunk design inspired by the Japanese bathhouse aka the Sento. These communal spaces are pivotal to the rest, relaxation, and recovery for locals and are often relied on as backdrops in film and pop culture. FTC takes a direct approach, applying a white tiled leather on the overlay, while crystal blue suede and icy soles represent the refreshing water.