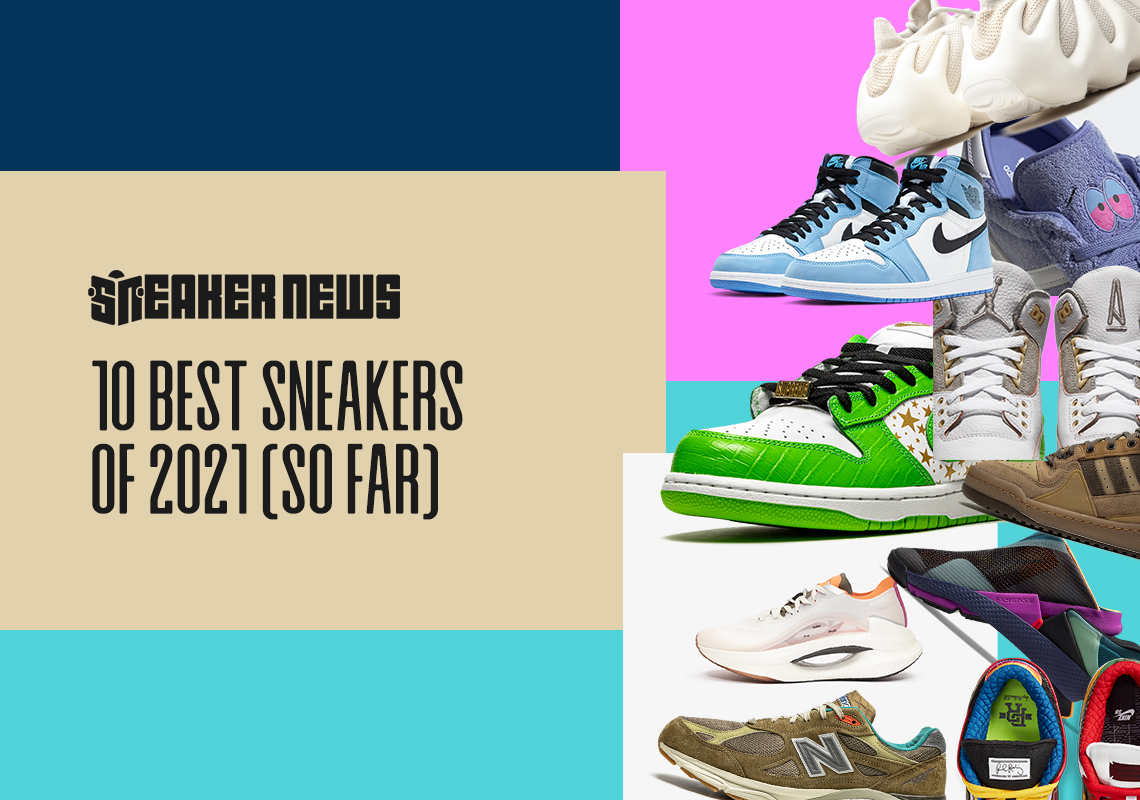 2021 is already half-over. But few can forget 2020, a year defined by a looming pandemic and social unrest. And though it’ll be long before we ever return to “normal,” the CDC has at least deemed it safe to step outside comfortably unmasked.

As commutes turn from seconds up to hours, many are leaving their sneakers at home, thus ushering in a new age of formal, sartorial footwear (think loafers, derbies, etc). Regardless, the culture has continued to produce some heavy hitters, with brands the likes of Nike, adidas, and New Balance spearheading new, innovative forms, bringing back fan-favorite collaborators, and celebrating holidays like 4/20.

To commemorate the best of the year thus far, we’ve compiled what we believe to be 2021’s best sneakers, all having released prior to publication. Numerous criteria — such as cultural impact, design, demand, and factors beyond — inform every decision; but like all lists, there exists some level of subjectivity, so you may not agree with every pick. The same is true of the staff itself, so we’ve added a few of our personal “honorable mentions” to both spotlight our personal tastes and the praise-worthy sneakers beyond the existing ten.

9. Soulland x Li-Ning Shadow Li-Ning has taken several leaps forward with their footwear over the last few years. This collaborative venture with SOULLAND brought a running story across two models, with the hollow-soled Shadow being a true prize.
8. Nike SB Dunk Low “What The Paul” For Paul Rodriguez, the Nike SB Dunk Low “What The Paul” is more than just a shoe — it represents everything the skater has experienced in his long-running career. Replete with references to past signatures, the release adds a personal touch previous SB collaborations have yet to match.
7. adidas Yeezy 450 “Cloud White” The YEEZY 450 released in March to a polarizing response. But regardless of your stance on the shoe, its design is a much-needed refresher within the adidas YEEZY roster and sneaker landscape as a whole. The sock-like model abandons BOOST-cushioning and reflective detailing for a two-piece build directly transported from Mr. West’s vision of the future.
6. Air Jordan 1 “University Blue” If you were to ask 100 people what the best Jordan of 2021 was, the majority would likely respond with the “University Blue” Air Jordan 1. ‘Nuff said.
5. South Park x adidas Campus 80s “Towelie” Though unlikely partners, South Park and adidas produced what was arguably the best 4/20 sneaker of 2021. With its considered inspiration and execution, the Campus 80 “Towelie” satisfied both new and long-time fans of the series without compromising its charm.
4. Nike Flyease Go NIKE, Inc.’s application of FlyEase technology took a huge leap forward with the Nike Go FlyEase, introducing innovation that allowed for the brand’s first truly hands-free sneaker ever. Availability among the differently-abled was a topic of contention, an issue Nike will hopefully address with future releases.
3. Bad Bunny x adidas Forum Buckle Low Emerging as 2021’s best new sneaker collaborator, Bad Bunny’s reimagining of the Forum coincided perfectly with the 1984 silhouette’s resurgence. The real win is in the promising future between the Puerto Rican star and adidas, a brand that has been searching for needle-mover for quite some time.
2. Maniere x Air Jordan 3 Womens Rarely do sneakers join “Best of the Year” conversations immediately upon releasing. A Ma Maniére’s Air Jordan 3, however, has been the exception to the rule, as its purposeful roll-out quickly led many collectors to add it to their hit lists.
1. Supreme x Nike SB Dunk Low Supreme and Dunk are two entities that create magic when combined together. Paying homage to their starry high-tops of 2003, the dynamic duo delivered four new colorways in Low form, further deepening the legendary status of this unrivaled partnership.