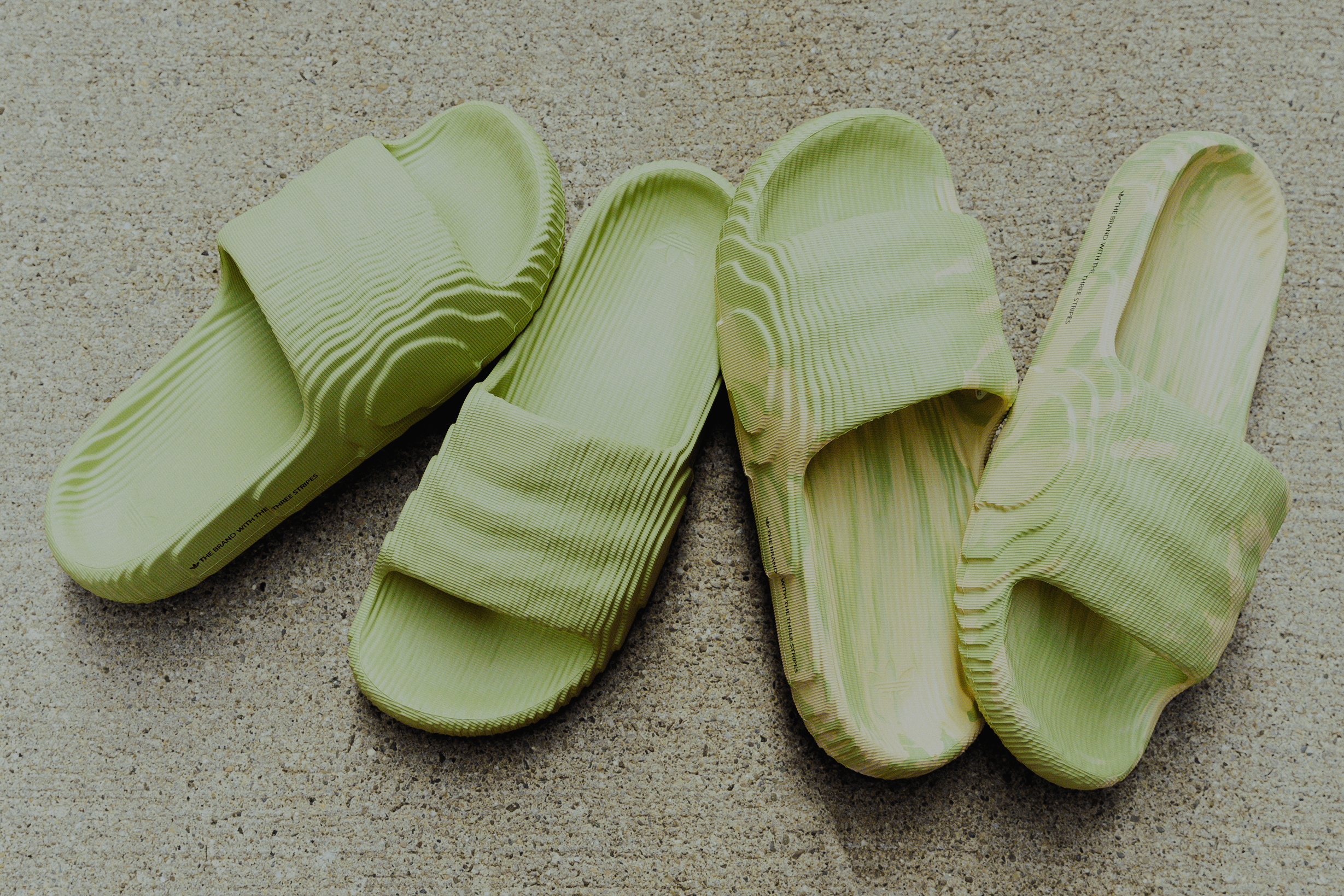 In sneaker culture, we frequently and vocally celebrate icons like the Stan Smith and Air Jordan 1, often retelling their history ad nauseam. Slides, however, rarely ever receive the same level of fanfare, a likely product of their simplicity and unparalleled ubiquity.

But while overlooked by the greater part of their fanbase, slides are no less important nor less historic than the sneakers of legend. Over the years, the likes of Ye (formerly Kanye West) as well as the fashion industry as whole have crafted their own versions of the sport sandal, turning them from a humble shower essential to a fashionable must-have.

And despite coming from many a different brand — in an equally overwhelming variety of styles — it’s likely the word “Slide” conjures to mind one model in particular: the three-striped adidas Adilette. 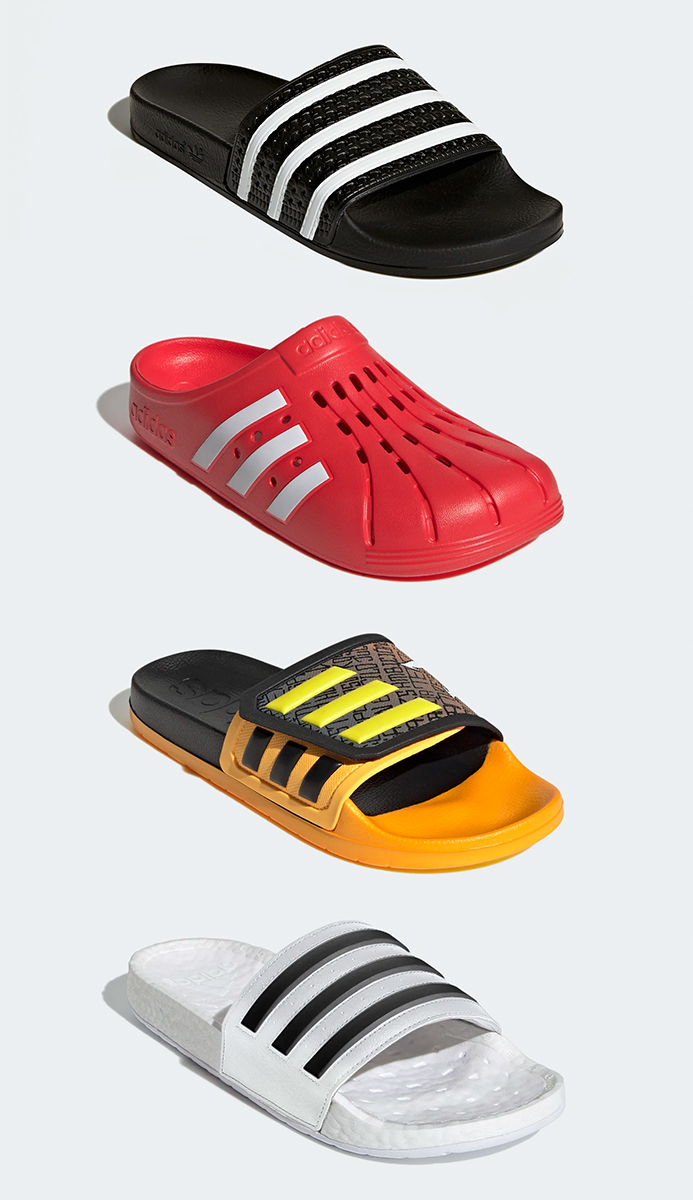 While it made its official debut in the early ’70s, the history of the Adilette dates as far back as 1963. As the story goes, Adi Dassler conceptualized the sandal following a conversation with a football manager/close friend, who desired a shoe that could protect his players from the germ-ridden swamp that was the football club’s shared shower space. While he knew what he wanted to create, Adi Dassler wouldn’t put the sandal into production until almost a decade later, as he was awaiting further advances in technology.

Positioned as a shower slide, Adilette made its first public appearance in 1970 alongside the German national football team. When the shoe was officially brought to market two years later in 1972, it was extremely popular, quickly becoming one of the Three Stripes’ best selling products.

Thanks to the influence of numerous celebrities, the Adilette is as much a shower slide as it is a fashion statement. And today, the name is no longer restricted to the original model. Alongside a healthy, replenishing stock of the latter, adidas also offers slightly distinct variants made with comfort, everyday lounging, poolside activities, and much more in mind.

What’s more, the brand continues to innovate on the original heavily, going as far to create a clog-inspired interpretation, which — alongside the newest to the line-up — is among one of the most unique additions to the collection.

FROM SHOWER SHOES TO FASHION STAPLE

Paralleling the rise of athleisure, the shower slide — and thus the Adilette — has gradually become more and more prolific over the decades. Again, this is due largely in part to celebrity influence, as figures such as Ye and even Mark Zuckerberg have helped bring these shower shoes out of the locker room.

Zuckerberg, though not quite as famous for his fashion tastes as the Louis Vuitton Don himself, has influenced an entire generation of would-be tech moguls, many of whom emulate the Meta founder’s simple attire down to his discontinued Santiossages. Ye has had a similar, albeit greater, effect on his drove of adoring fans, who diligently follow the artist’s every move. And in recent years, the Yeezy head has vocally celebrated the slide as fashion, wearing ones either too small or much too big and releasing the ever-popular Yeezy Slide.

Fashion labels both high-end and otherwise have also had a hand in shifting the paradigm. Gucci, for example, notably copied the Adilette, creating a premium knock-off that would go on to inspire some poetic lyricism from the likes of Future. Celine, Balenciaga, Dior, and many other fashion houses would create their own slides, turning them into an established piece of luxury.

Despite being at the center of the slide’s popularity, adidas has lost out to many of the brands above, as the culture would often flock to these high-end and streetwear-infused imitations. But in the year 2022, it seems the odds have shifted in the favor of the Three Stripes, and this is all thanks to one shoe in particular: the Adilette 22.

As mentioned above, adidas has continued to expand on the Adilette family, adding new styles and colorways near every season. But besides being upgraded with BOOST and collaborating with LEGO, the line-up wouldn’t garner much excitement until May of 2022. At this time, retailers begun sharing imagery of the Adilette 22, the latest update to the humble shower slide that was invented over six decades prior.

Aesthetically speaking, the Adilette 22 — which was notably likened to the Yeezy Slide — is a distant relative of what Adi Dassler created in 1970. Inspired by 3D topography and human expeditions to Mars, the design helps answer one question: “What would slides look like in space?”

Both upon its early release as well as its wider debut on June 23rd, the Adilette 22 sold out in mere moments, making it extremely difficult to get your hands on a pair. Worry not, though, as there will be a few releases both in July as well as in the Fall.

adidas has reported that the “Magic Lime” colorway will be debuting on July 8th, hitting adidas.com as well as select retailers. Further down the road, the “Aluminum” and “Carbon” will release later this September.