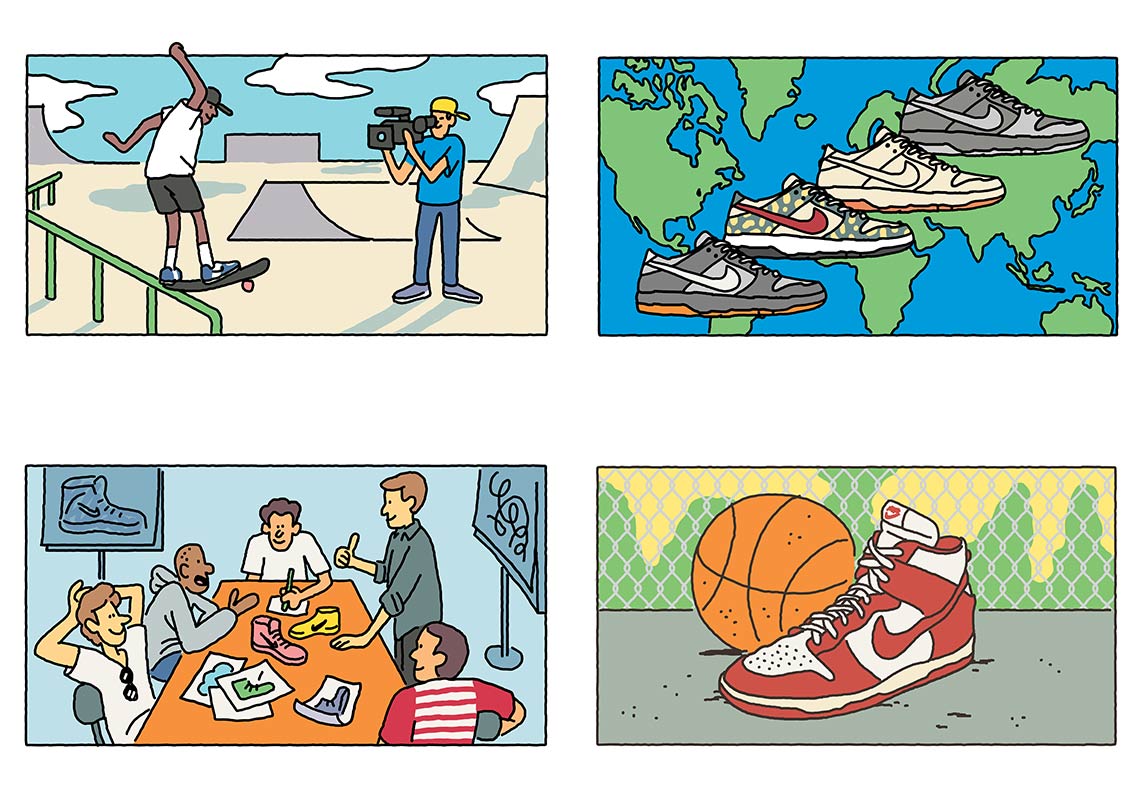 WHAT ARE NIKE DUNKS? AN OVERVIEW

If you’ve only recently gotten into sneakers, then you’re probably asking yourself one question: What are Nike Dunks?

The Dunk is Nike’s current poster child, rivaling even classic Jordans in terms of popularity. Released first in 1985, the Peter Moore designed model has evolved dramatically in the decades since its debut. Today, now 2021, pairs like the Dunk Low Disrupt have branched off from the original’s legacy, though said update and even newer collaborations owe decades’ worth of history for their very existence. From the Dunk High to the Dunk Low Pro B and then finally to the Dunk Low Pro SB, the silhouette has transformed many a time, and it now dominates the market with a full wardrobe of looks, makes, and colorways.

As it stands currently, the Dunk is near impossible to grab for its retail price. With a devoted fanbase and an abundance of resellers, it’s likely you’ll only be taking home an L. That wasn’t always the case, however. Despite being impossible to keep on the shelves today, the silhouette constantly fell in and out of relevance following its debut, changing hands from basketball players to skateboarders to those in love with the shoe today.

With Travis Scott, Virgil Abloh, and cult labels aplenty in its corner, all eyes are on the Dunk. But if you don’t quite know about its origins or what makes it so significant, keep reading.

“
The Nike Dunk is the brand’s current poster child…”

Near four decades ago, the Dunk was but a humble basketball proposition that owes the Final Four for its roots. Back in the 80s, four NCAA teams faced off all wearing Nike, an unlikely event that planted the seeds for the silhouette itself as well as the “Be True To Your School” pack. In design, Peter Moore took inspiration from three era-defining performance kicks: the Legend, the Terminator, and, of course, the Air Jordan 1.

Enter the “Be True To Your School” pack. The campaign, which was replete with not only the shoes themselves but also athletic apparel, took the colors of 12 different schools and laid them atop the uppers. This was notably rare as the 80s were mostly defined by simple, white-dominant colorways, and the Dunk came in and completely shifted the landscape dramatically. Syracuse, Michigan, St. Johns, and many more were represented, with quite a few receiving retros for decades on.

At the time, though, the Dunk wasn’t quite an icon just yet. The Air Jordan 1, thanks in part to MJ’s growing popularity, would eclipse the silhouette near entirely, pushing it far away from the proverbial spotlight and into the bargain bins across the nation. It was then that skateboarders adopted the shoe, partly for its resemblance to the aforementioned as well as its flat soles, grip, and leather composition. 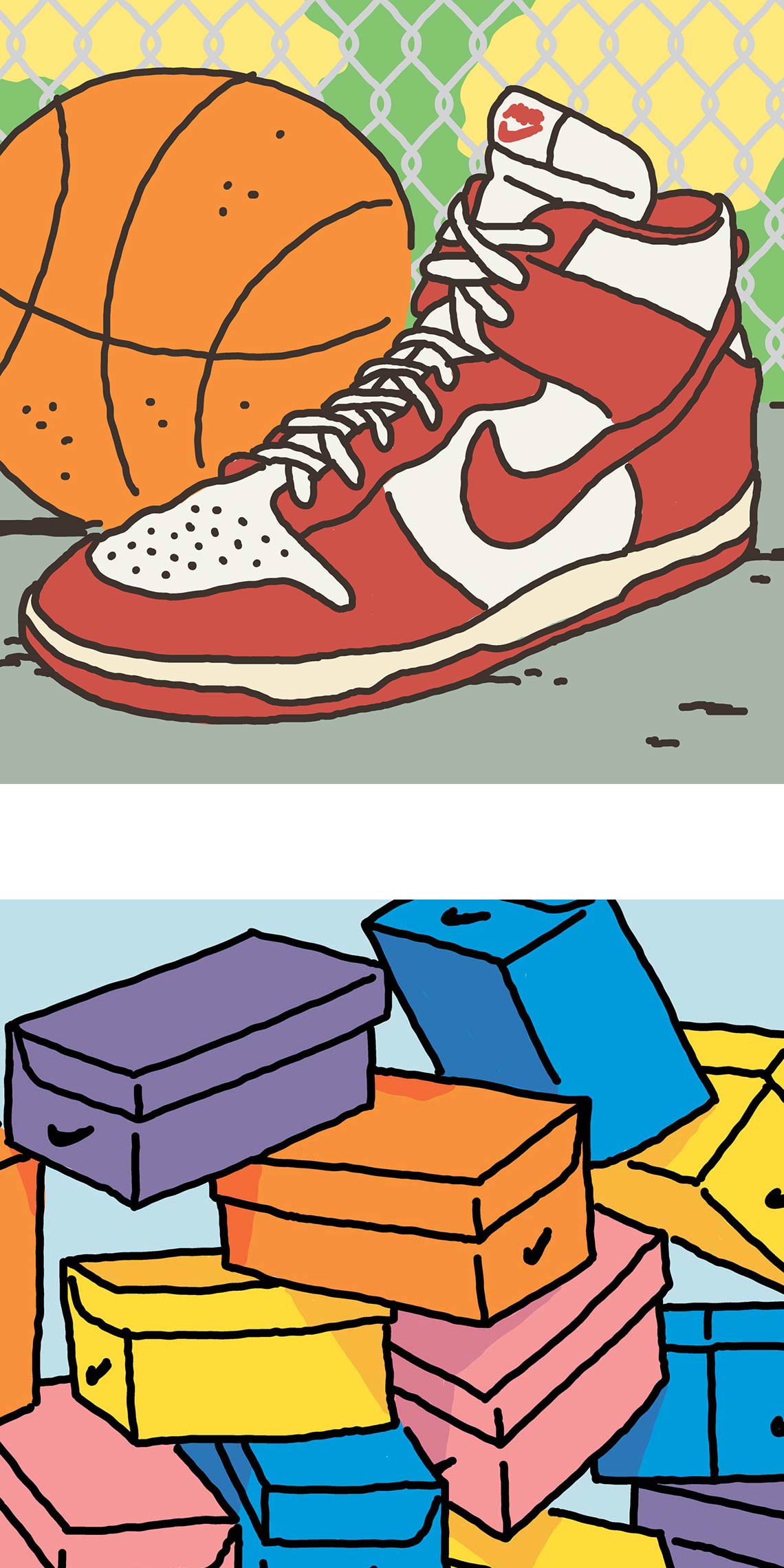 FROM THE HARDWOOD TO THE HANDRAIL 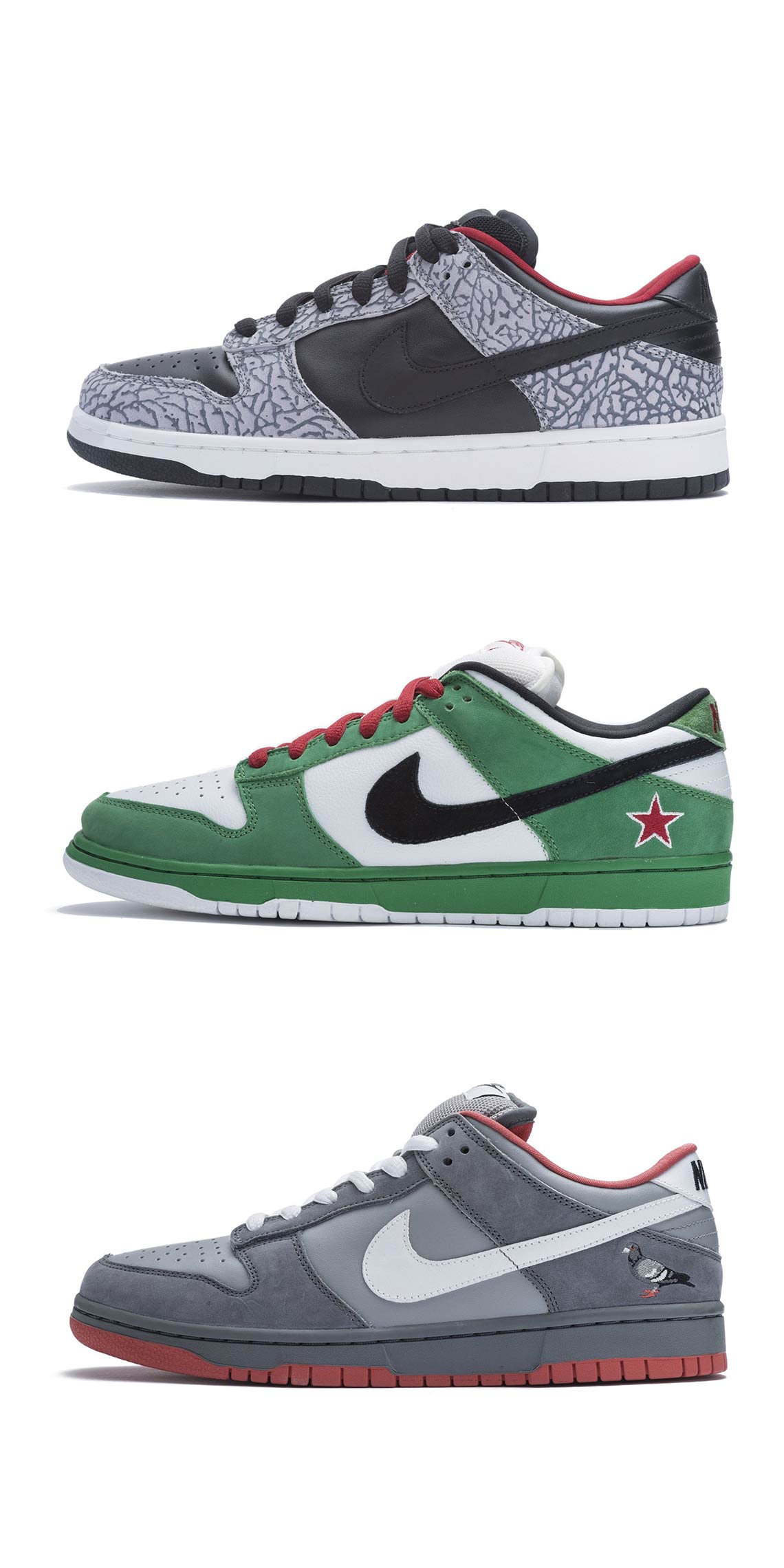 FROM THE HARDWOOD TO THE HANDRAIL

Coincidentally, the Dunk had everything a skateboarder would ever need. That made it all the more easier to spread throughout the community, laying the soil for the craze that would soon arrive. But before the Swoosh officially begun to endorse the Dunk as the flagship skateboarding shoe, they made a few attempts that didn’t sit right with the skaters themselves, making no effort to actually listen to needs and wants.

That all changed when the Dunk Low Pro B hit the West Coast. Born from a disagreement with big box retailers, the silhouette was essentially a skater’s shoe, thick in its padding and heavily expressive in color, pattern, and texture. The Pro B was the Dunk gone rogue, entirely distinct from the college inspirations prolific the decade prior. And when it crossed seas over to Japan, CO.JP exclusives started legacies of their own.

In 2001, Alphanumeric founder Alyasha Owerka-Moore refined the shoe even further, creating one of the very first collaborations. This customized, skateboarding-geared take, then, sparked the interest of the late, great Sandy Bodecker, the legend responsible for Nike SB. Upon seeing the shoe, Bodecker began his mission to further bridge Nike and Skateboarding; he sought insight and knowledge from skate shops and gave them a voice they weren’t previously afforded. His hard work would eventually pay off, and with the community behind him, Nike SB was born. And just a year after in 2002, the Nike Dunk Low Pro SB launched with fat tongues, elastic straps, and a brand new Zoom Air sockliner.

Today, the Dunk is a different beast, now more popular than it ever was.

2018 was the catalyst for the silhouette’s meteoric rise, when Nike employed the help of old friend Diamond Supply — the streetwear stalwart that is largely responsible for reigniting interest with their “Canary Diamond” colorway, a F&F pair currently worth a couple thousand USD. Supreme and Concepts reunited with the Swoosh not long after, aiding the effort with Jewel Swooshes and Lobster-inspired sequels, respectively.

Further collaborations quickly begun to pour in soon after, and some would consider many of this past years’ releases objectively legendary. Travis Scott brought his loud, aggressive energy to the SB form, Virgil Abloh paid homage to the “Be True To Your School” pack, and Ben & Jerry’s injected some wild, ice cream flavor. And that’s not all, as a new generation of collaborators have also joined the movement, including Cactus Plant Flea Market, AMBUSH, and near all of the most prolific skate shops.

Both Nike SB and the brand’s mainline component currently offer the Dunk simultaneously. The latter frequently deals out retros of classic colorways and at times more obscure pairs of CO.JP origin; alongside, women’s exclusives, new schemes, and morphed interpretations are available every season, expanding the model’s accessibility and variety. Nike SB, however, is far more selective: with their Orange Label umbrella, the sub-imprint prepares simple, everyday makes exclusively for skate shops; the SB collabs are also extremely limited and often drop in smaller quantities.

Where the Dunk goes from here is anyone’s guess. It could very well repeat past mistakes and lose its luster like it did many a time before. But if you’re looking to grab a pair today, check out our Sneaker Release Dates page to see what’s upcoming or head over to eBay to cop some right now (albeit for after-market prices). 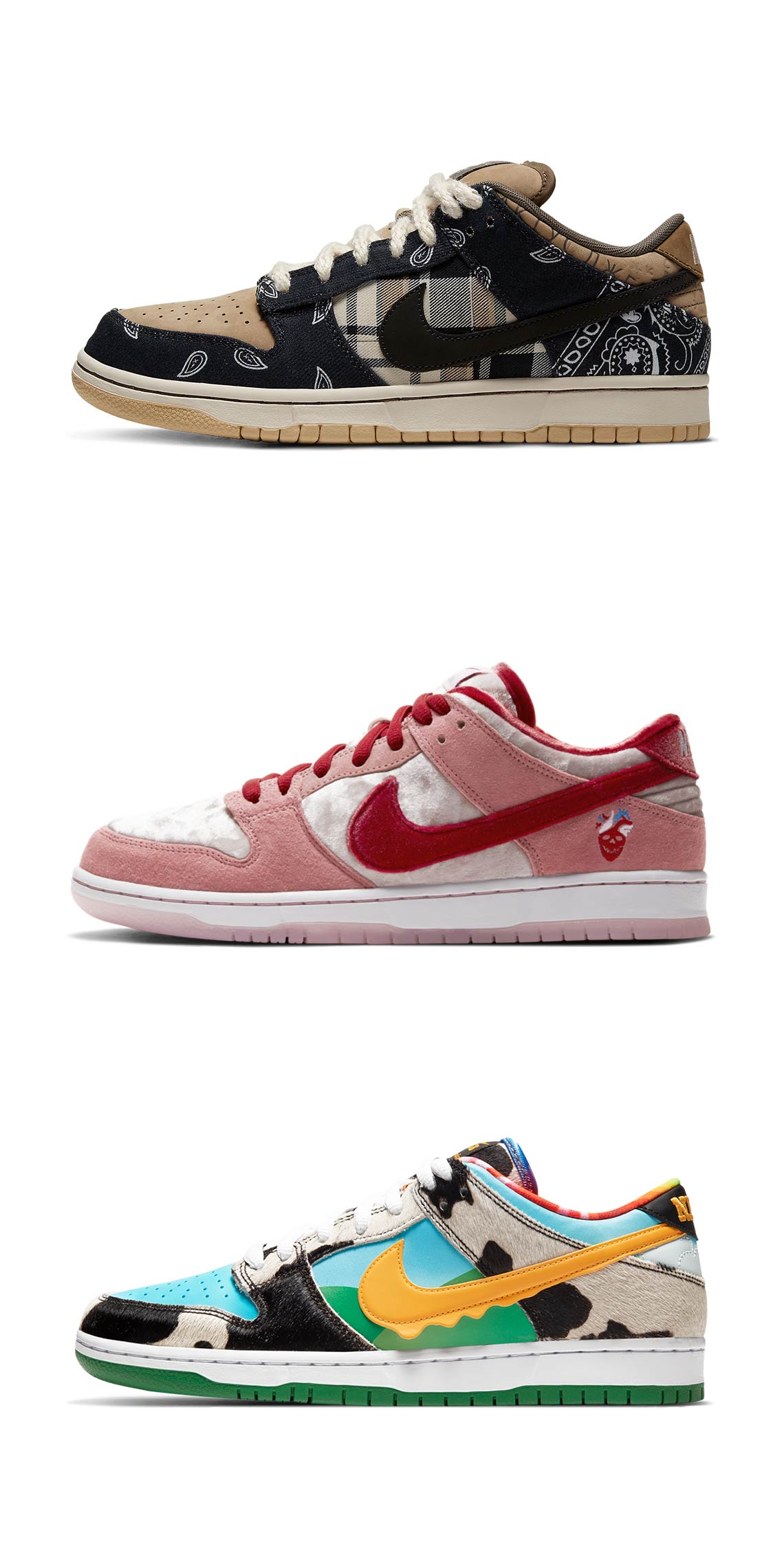