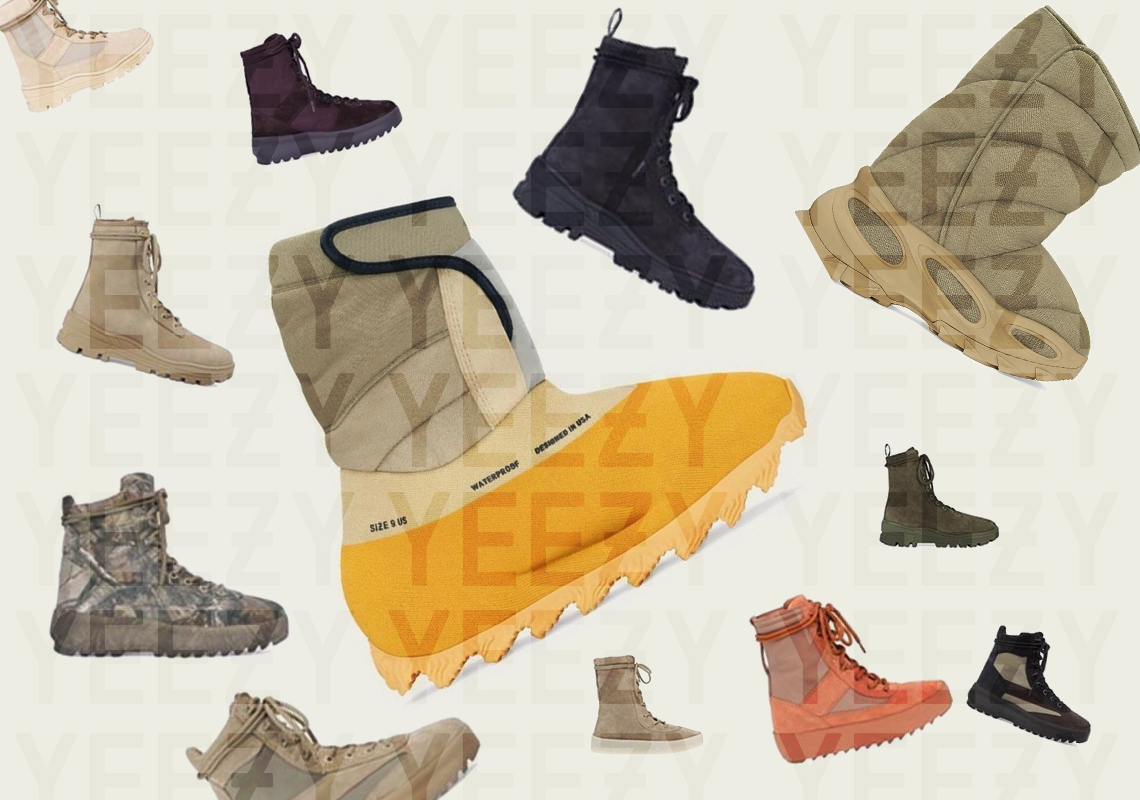 Ranking the Best YEEZY Boots, From 2015 to Present-Day

Ye – the being formerly known as “Kanye West” – knows product. He’s proven so time and time again, with his latest “MasterClass” being delivered through adidas YEEZY, the partnership he entered on December 3rd, 2013. Over the last eight years, the DONDA-frontman has delivered footwear for the future, and while certainly occupied with looks, Ye has also injected form and function into his designs. No series better demonstrates his commitment to performance than YEEZY BOOTS.

Released sporadically and almost-exclusively during autumn and winter, Ye’s heavy-duty footwear has been reliable and stylish, though the latter quality is subjective. In honor of two recent entries into the YZY BT catalog, as well as another year of YEEZY winding down, here’s a definitive ranking of the best YEEZY BOOT models, from 2015 to present-day.

First seen on June 6th, 2016 as part of YEEZY’s Season 2 collection (which was free of adidas’ involvement), the Crepe Boot has returned time and time again with minor modifications and in new colorways. Offered for both women and men, the high-top boot features a premium suede upper. The model’s signature detail, however, is the crepe rubber sole unit, which falls in-line with a tried-and-proven military design – perhaps most famously Clarks’ Desert Boot.

Although The Beatles, their contemporaries and dozens of entertainers after them saw the chelsea boot as a wardrobe staple, Ye’s co-sign of the slightly-elevated shoe during the mid-2010s garnered a new audience for the Victorian-era design. Countless men exchanged sneakers for the laceless boot, which YEEZY begun selling on April 20th, 2018. Solid.

Before Ye inspired countless individuals to adopt a dystopian aesthetic partly-informed by the 2011 London Riots, he put on a women’s collection during Paris Fashion Week 2011. In addition to little black dresses, slouchy blouses and unstructured blazers, the showing included heels. Co-signed by Kim Kardashian, YEEZY’s heel-featuring boots don’t reinvent the choice in footwear, but should be celebrated for being included within the label’s purview, and with such variety.

Successor to the YEEZY MILITARY BOOT, the COMBAT BOOT delivers a “no B.S.” look sure to get military members’ stamps of approval. While a luxury take on functional design, the silhouette has gravitated towards muted colorways for a traditional style. Uppers are rather uninteresting, but robust sole units aren’t, which may led other YEEZYs to appear with them in the near future.

Having debuted on November 5th, 2021, the YEEZY INSULATED BOOT is a newer entry within the YZY roster, but it’s already left its mark. Effectively coupling the YEEZY FOAM RUNNER, a quilted puffer jacket and snow-ready traction, the $340 boot is perhaps Ye’s wildest creation yet. And while it more than works, it’s not for the average consumer.

Rumored to debut in December 2021, the 1050 revisits some of the design language seen in previous releases, namely the 950 and YEEZY BOOST 700 V2. Infamously worn with an all-red leather outfit during Ye’s “DONDA” roll-out, the pair features a zippered shroud covering the tongue and one of the most intricate sole units to grace a YEEZY model. The inaugural orange colorway is arguably hard to digest, but monochromatic styles are sure to gain wider traction.

Launched on November 13th, 2021, the latest boots from YEEZY reimagine the sock-like YEEZY KNIT RUNNER that released on September 23rd. Tall, padded, waterproof and designed in the U.S.A., the model has been compared to oven mitts by netizens. Jokes aside, the YZY KNT RNR BT is a breath of fresh air to the footwear scene, even though UGGs have been around for years. (The Australian brand isn’t styling its fur-line boots in “Sulfur” though!)

As the first official YEEZY BOOT offered at retail, the 950 set high standards. Launched on October 29th, 2015 for a whopping $595, the model remains the most-expensive non-heel-donning YEEZY ever. Nylon, suede and weatherized textile make up the upper, while the tooling underfoot nods to a classic duck boot design. Ye has teased follow-ups to the all-around aggressive silhouette, but none have been released as of this writing. (I’m still waiting for that pair then-Kanye West wore at MTV’s 2016 Video Music Awards!)

Unquestionably the most ubiquitous boot designed by Ye, this option adds a casual spin to a militaristic aesthetic. An asking price of $200 and full-family sizing has also helped the silhouette garner more support than its kin. Since April 13th, 2019, the model has also introduced experimental color-blocking to the YZY family, which is always welcomed.

Reminiscent of footwear worn by active military personnel across the globe, Ye’s offering gives tried-and-proven design a refreshing spin with his choice of colors. Pairing dark brown with a sandy tan isn’t an accomplishment by any means, but employing “Burnt Sienna” and untraditional color-blockings, as well as adjusting the shape and height, are. Simply put, YEEZY got this one all the way right.