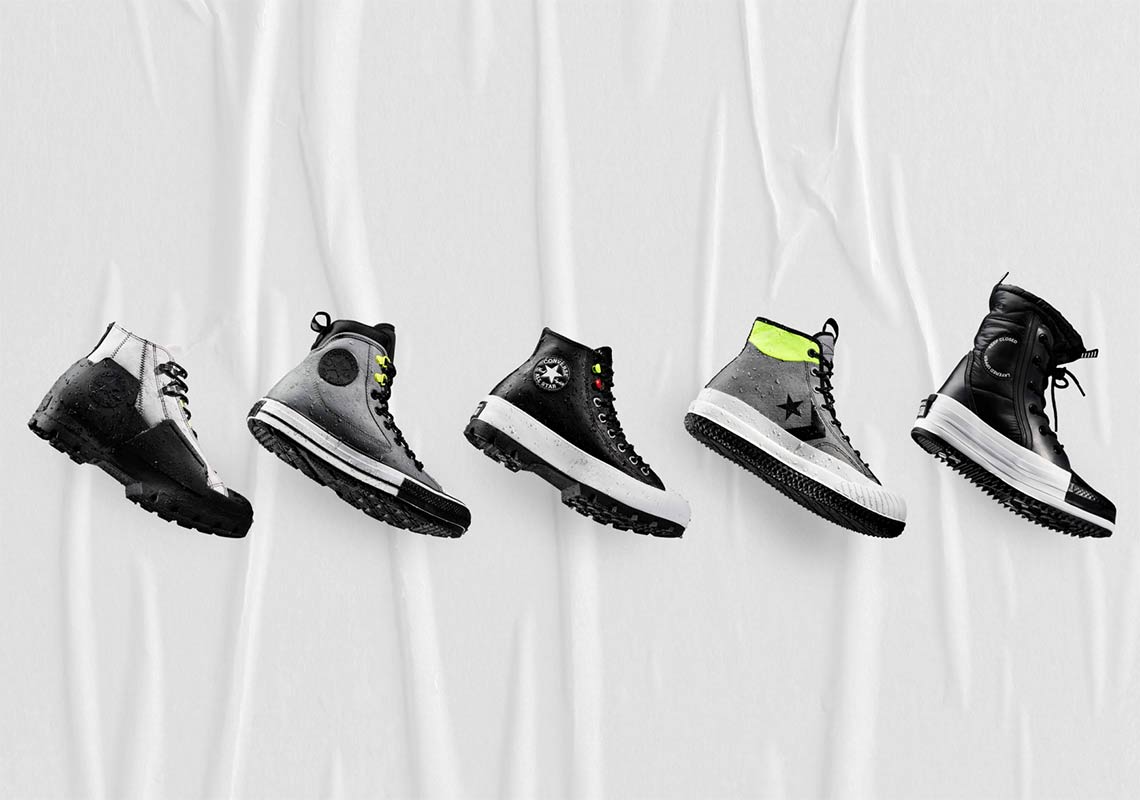 Unlike the offerings from Jordan’s side of the camp, Holiday 2020 marks an observable shift for Converse‘s inline releases. While the brand would typically indulge in more palatable, universal styles, this year’s collection aims to improve utility through a total of six silhouettes, all with their own share of colorways.

From collaborations made widely accessible to classics turned unrecognizable, the range flips through an evidently deep set of influences. To learn more about each of the upcoming pairs, read on. 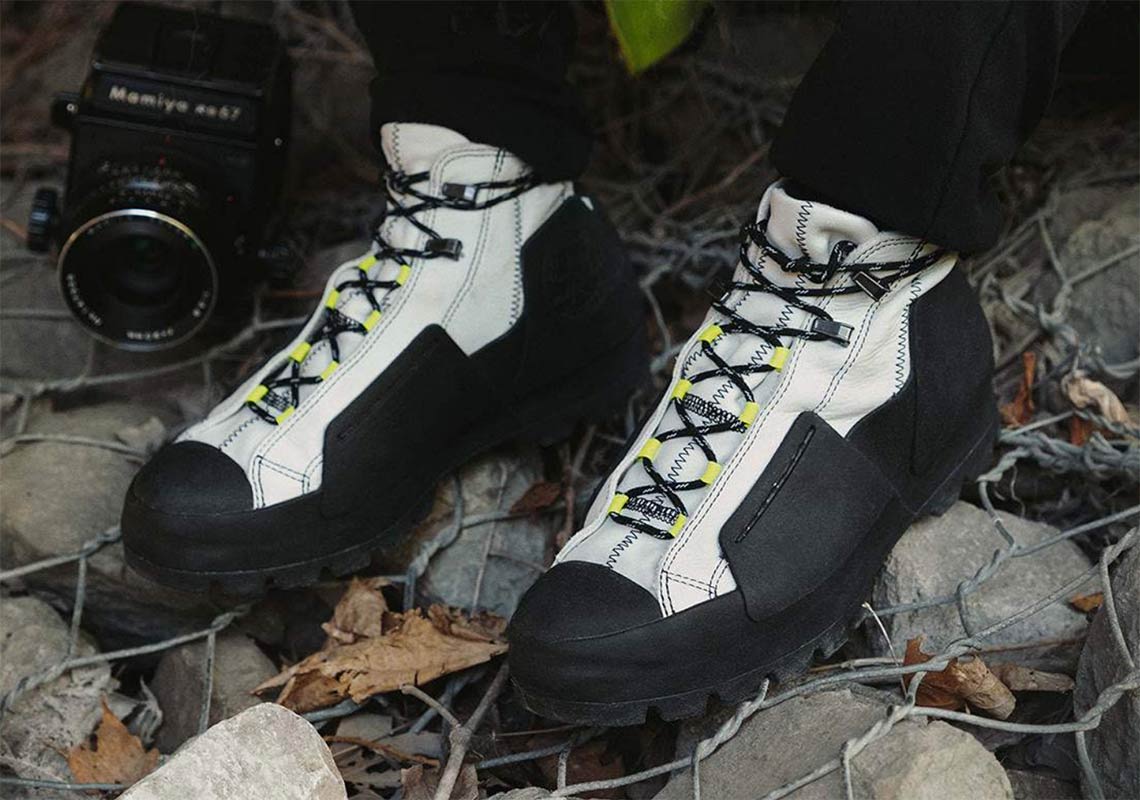 Rugged and more akin to a boot than the Chuck it draws atop, the Chuck Taylor All Star Storm Boot acts as a bridge between retro basketball style and technical hiking gear. And while it builds along the foundation of the Chuck Lugged which appeared in 2019, many will be instantly reminded of A-COLD-WALL’s collaboration from only weeks ago. Bereft of those ACW hits, the general release pair adds a split-toned, neon-accented rendition to the mix, layering these very shades over a nubuck upper that hides the GORE-TEX bootie and micro-fleece lining underneath.

Prepared in two colorways — Photon Dust and Dark Root — the Storm Boot will be available later this week on October 15th for a retail of $150 USD. 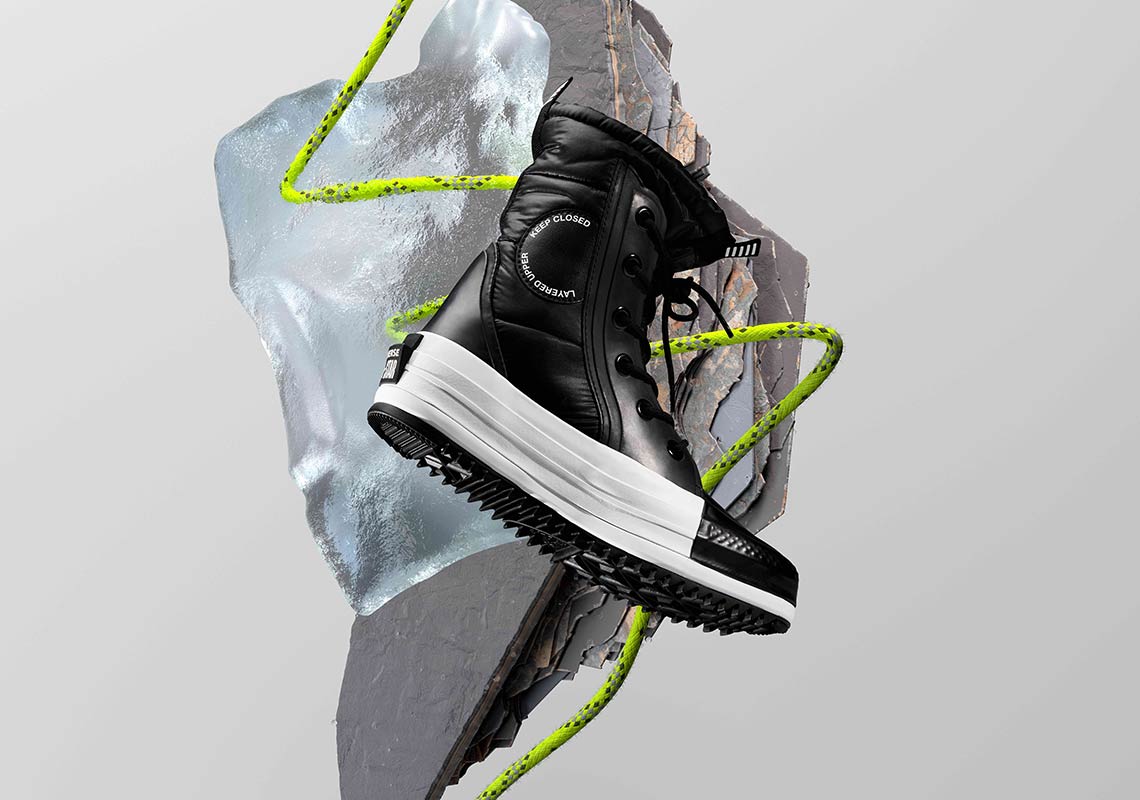 Arriving on the same date, the Converse MC Boot brings along warm weather functionality in a package aesthetical reminiscent of your “favorite winter jacket.” Designed with both movement and insulation in mind, the high-top silhouette constructs near entirely of a poly fill upper that’s lined underneath with fleece. The sole, though shaped like that of the Chuck Taylor, is accentuated in size and upgraded below with a lugged outsole that increases durability and traction during heavy snowfall.

Expect to find the MC Boot in Black and Limestone Grey on October 15th at a price tag of $120 USD. 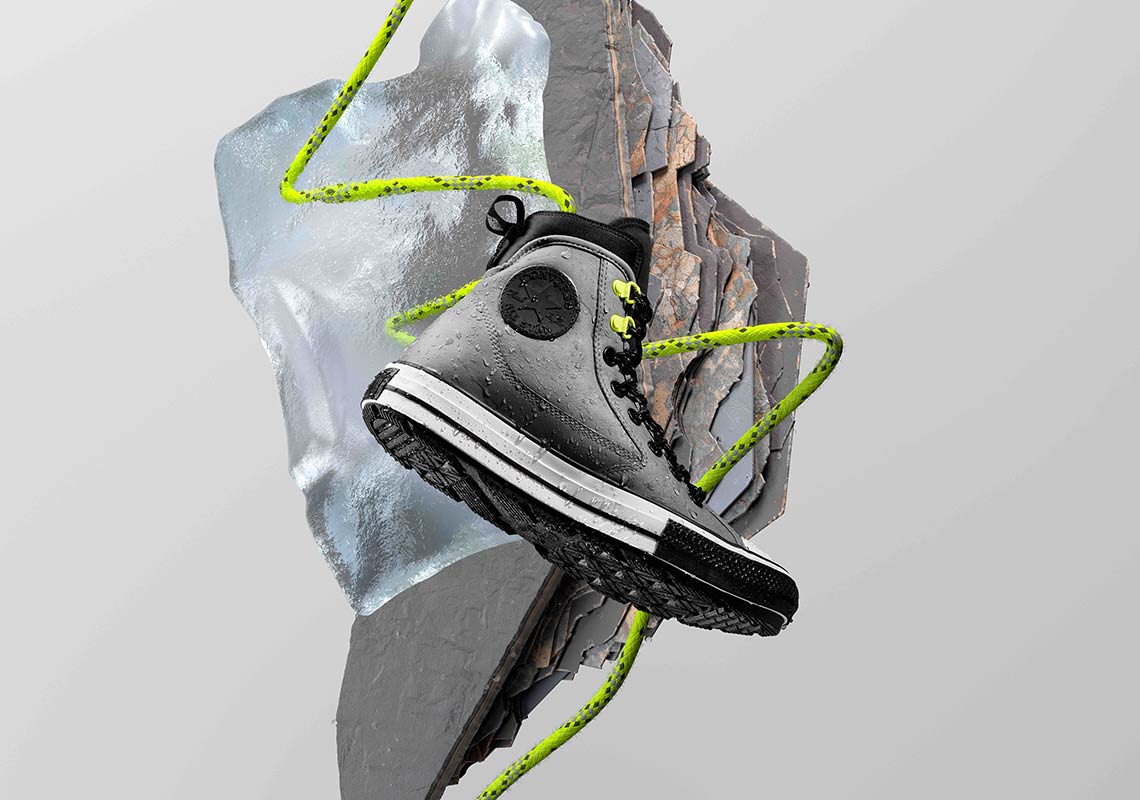 For something more stripped down, relatively minimal, the brand has offered up the Utility All Terrain Chuck Taylor All Star, a mouthful that speaks much quieter in its presentation. Closer to that of its blueprint, the pair builds of a waterproof leather upper and further upgrades with a fleece just like its aforementioned complements. Treads beget traction, certain elements dose in hi-vis reflective accents, and all of the above come together for an everyday sneaker.

Extensive in its choice of colors, the model will be arriving in Limestone Grey, Dark Root, Black/Egret, and Black/Black later this October. 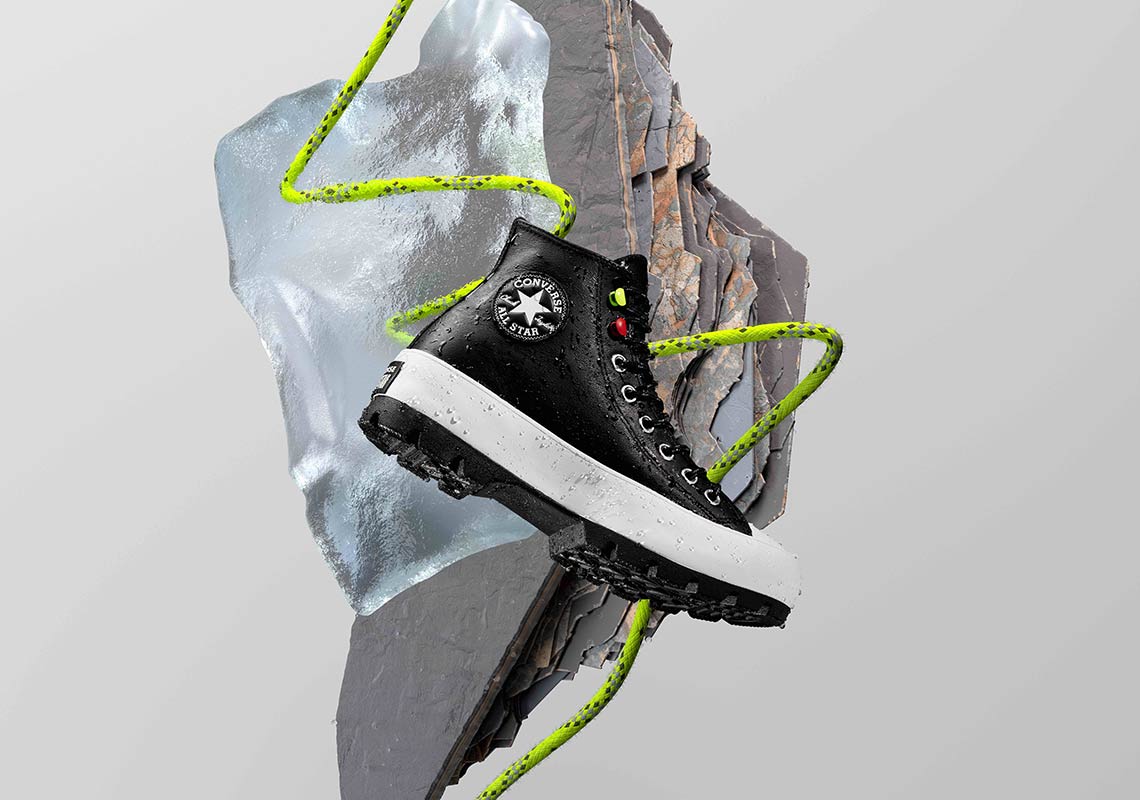 A sleek women’s alternative to the Storm Boot that leads the collection, the returning Chuck Taylor All Star Lugged reintroduces the robust silhouette with a host of winterized tweaks. Leather uppers add an overall premium effect in its various colors, while GORE-TEX booties and Sherpa linings infuse utility in subtlety. Its platform tooling then adds neutral, gripping foot while the above strings and lace hooks contrast with reflective detailing and colored hardware, respectively.

The Chuck Taylor All Star Lugged Winter Boot will appear in Black, Dark Root, and Limestone Grey later this October at a retail of $110 USD. 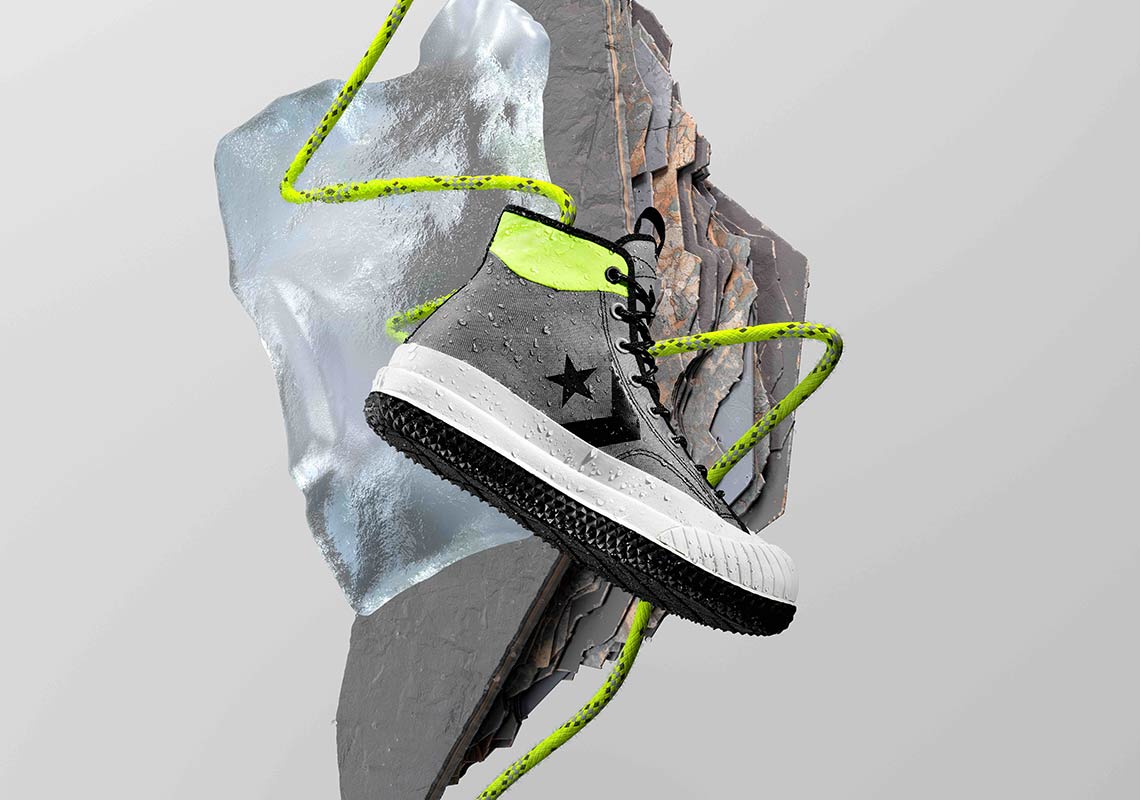 Then comes the Bosey MC GTX, a recontextualized version of the Bosey MC18 that first surfaced only about a year ago. Designed with both functional and aesthetic intentions, the silhouette employs a number of features through, including an Ortholite insole, lightweight construction, and an internal GORE-TEX bootie.

Expect to see the Bosey MC GTX in Limestone Grey and Malted later this October. 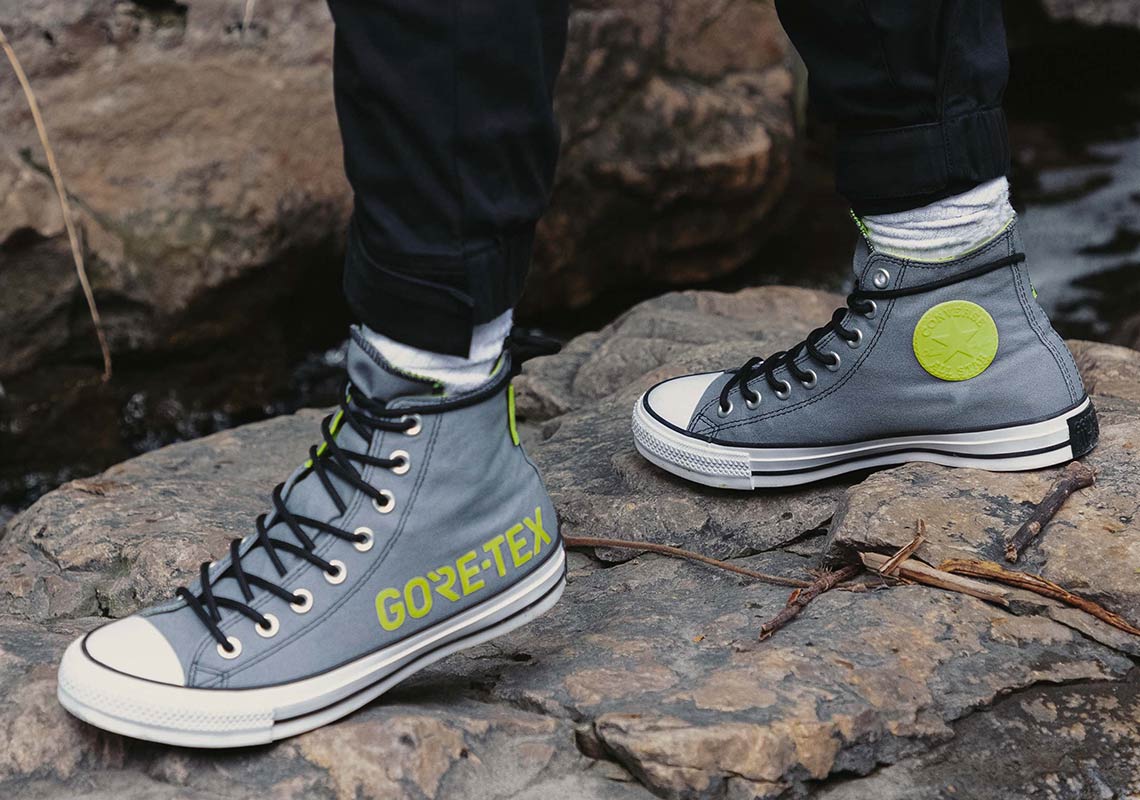 To continue an established classic, Converse has prepared yet another colorway for its selection of GORE-TEX outfitted Chucks. While there’s likely more to come down the road, the third year is propelled further with a grey upper that’s branded and accented with a number of Volt details.

Grab a look here and expect its release later this October at a retail of $80 USD. 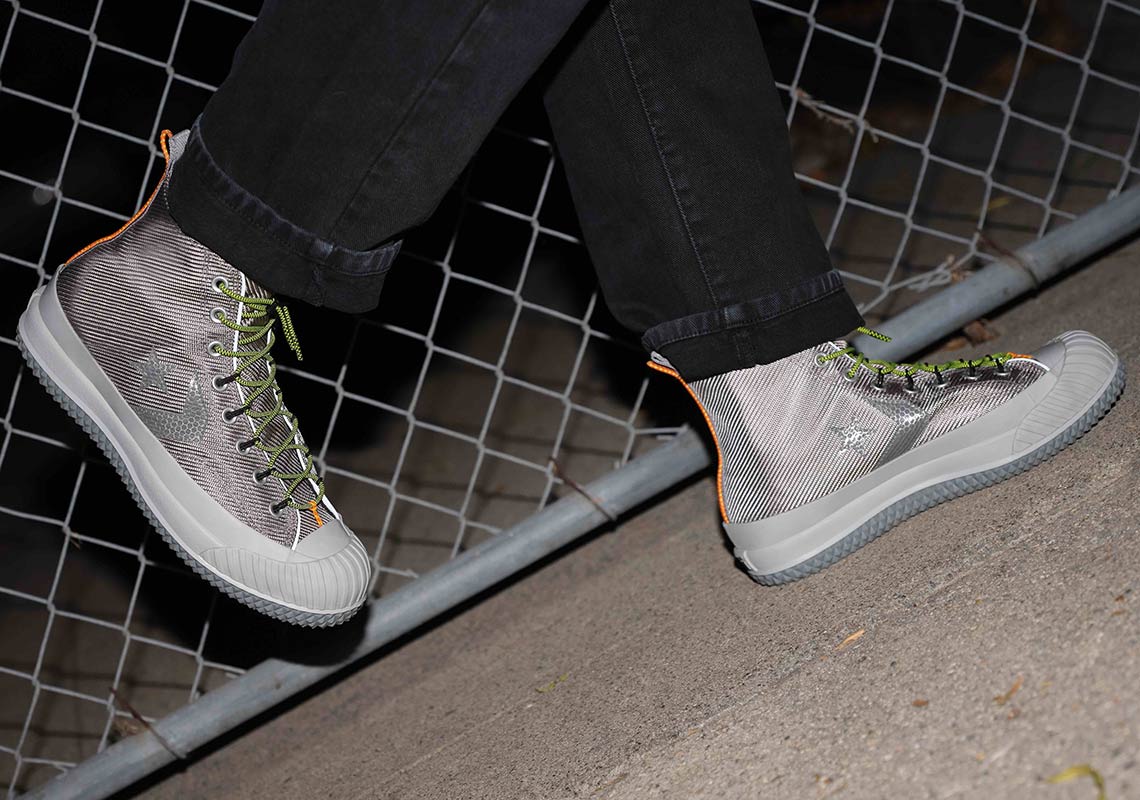 Released by its lonesome, the non-GTX version of the Bosey MC takes direct cues from the Lakestream Wading Shoe Converse released back in the 1940s. Imbued with similar style, the pair complements an olive upper with functional speed lacing systems and an additional lace lock.

The Bosey MC will be arriving in one colorway, Grey, on November 10th for a price tag of $120 USD.