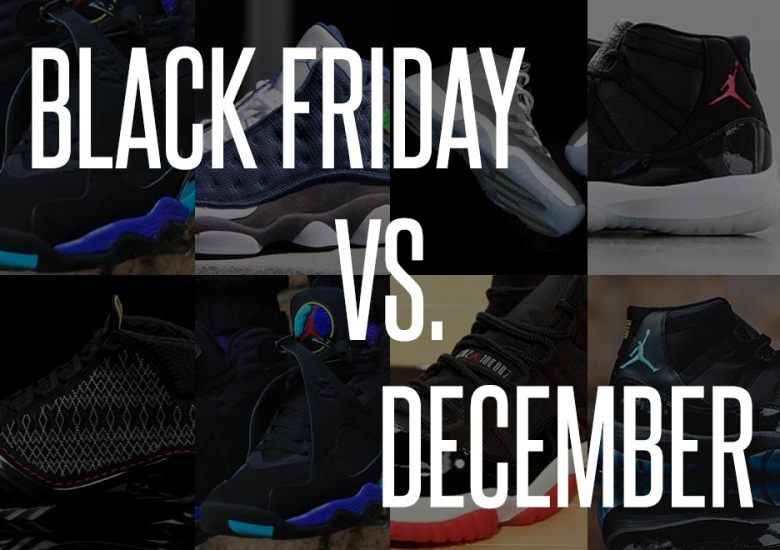 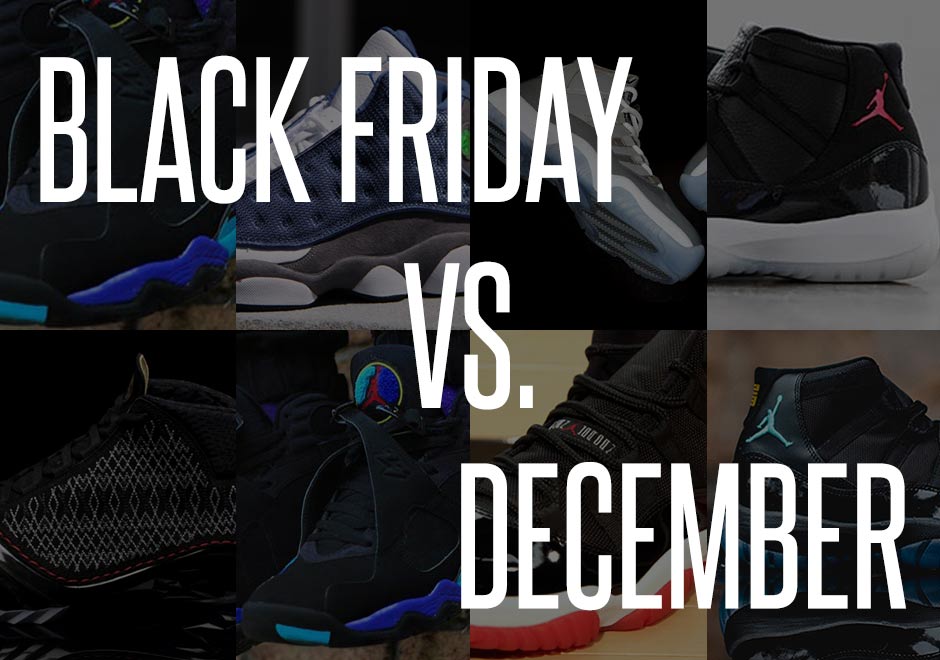 The final two months of the calendar year are always the most exciting for Air Jordan fanatics. Traditions have emerged in recent years that have trained us to expect certain sneaker treats for both November and December, and have we been disappointed? Not at all. More specifically, Black Friday and the last week in December have consistently been home some of the most coveted pairs year in and year out, and while the December Holiday release gets more attention, examining the releases from Black Friday says that the November tradition might be the better.

The younger crowd might say that the December Holiday releases are stronger; there’s a Pavlovian-response conjured up by mentions of the yearly Air Jordan 11s that have landed there, and we can understand why the excitement exists. The Black Friday pairs that we’ve seen on the other hand have been a bit more varied – among them are retro pairs that have recently trended towards the honored “Bred” end of the spectrum. So which is it – Black Friday or December Holiday? Check out this timeline of Jordan Brand’s big releases since 2008 and let us know what you think.

It can be argued that the shoe releases lined up for November and December of this year was perhaps the most significant of this particular span we’re investigating. The release of the Air Jordan XX3 was a major milestone for the brand for a number of reasons, and Jordan Brand came through with an incredible luxurious, tech-packed, and game-changing design that to this day remains as one of the most underrated Air Jordans of all-time. The following December closed out the Collezione onslaught with the best release of the year-long dozen, with the Air Jordan XI “Bred” and Air Jordan XII “Taxi” coming together for on singular release.

2009’s respective Black Friday and Holiday releases of the Flu Game XIIs and Space Jams touched on two sides of Jordan’s legend. One focused one his on-court magic and arguably his most memorable single game performance, while the other placed a spotlight on Jordan’s stardom off the hardwood. Michael was flu-ridden for Game 5 of the ’97 Finals, and while most would sit the game out or likely perform at half-power, Jordan had his best game of the series and captured the pivotal game that would give Chicago the only momentum they needed. Earlier that NBA season, the movie “Space Jam” released in theaters, drawing huge crowds in typical Jordan fashion.

This 2010 match-up pins two of the greatest non-Bulls colorways in Air Jordan sneaker history. The Flints are indeed an OG colorway, a mix of white, blue, and grey tones that were seemingly a UNC tribute. The “Cool Grey” first debuted in 2001, kicking off a string of great Retro releases anchored by that sleek grey tone. While the latter released lured mass lines and campouts, some value the Flints more. Where do you stand?

Battle of the OGs. The Black/Cement IIIs are a bonafide classic (some may call it the best ever), but the Collezione release just three years prior may have taken some mystique away from the shoe. The Concords, on the other hand, were the single must-have Air Jordan release of the year, and stores everywhere could not meet the demand. There’s no wrong answer if you were asked to choose one, so maybe this is the closest draw we’ll have in this entire group.

Perhaps following the 2011 blueprint was this duo of Air Jordan Retro releases. The original “Bred” was the theme here, with the Air Jordan IV silhouette going up against the undisputed Air Jordan release for the month of December. Both pairs were part of the Collezione release, but it can be argued that consumers paid “more” for the Air Jordan IV back then because unlike the Air Jordan XI Collezione, the IV model came packaged with a less-than-desirable shoe.

Last year definitely broke the mold. Jordan Brand was celebrating the year of the V, and it used the busy Black Friday shopping day to drop the Black/White colorway unofficially dubbed the “Oreo”. One month later, the Brand introduced “Gamma Blue” into the mix, and while the sneakers were a hit at retail, it has yet to crack that select “OG” circle of XIs. This one’s a coinflip: which new Retro colorway did you vibe with more?

We don’t need to tell you that these two confirmed November and December releases are going to break the bank. Arriving this post-Thanksgiving is the Air Jordan VI “Infrared” (it won’t be packaged with the White pair like it was in 2010). December will feature the Air Jordan XI “Legend Blue”, a slightly altered take on the OG “Columbia”. The releases haven’t gone down yet, so there’s still time for you to decide, but we figure that both of these will be in your personal stashes once its all said and done.

For Black Friday, Jordan Brand released one of the most revered colorways of all-time – the “Aqua” on the Air Jordan VIII. Countering that release is an Air Jordan 11 inspired by the legendary 72-10 season that Michael Jordan spearheaded in 1995-96. Which of the two is your favorite?