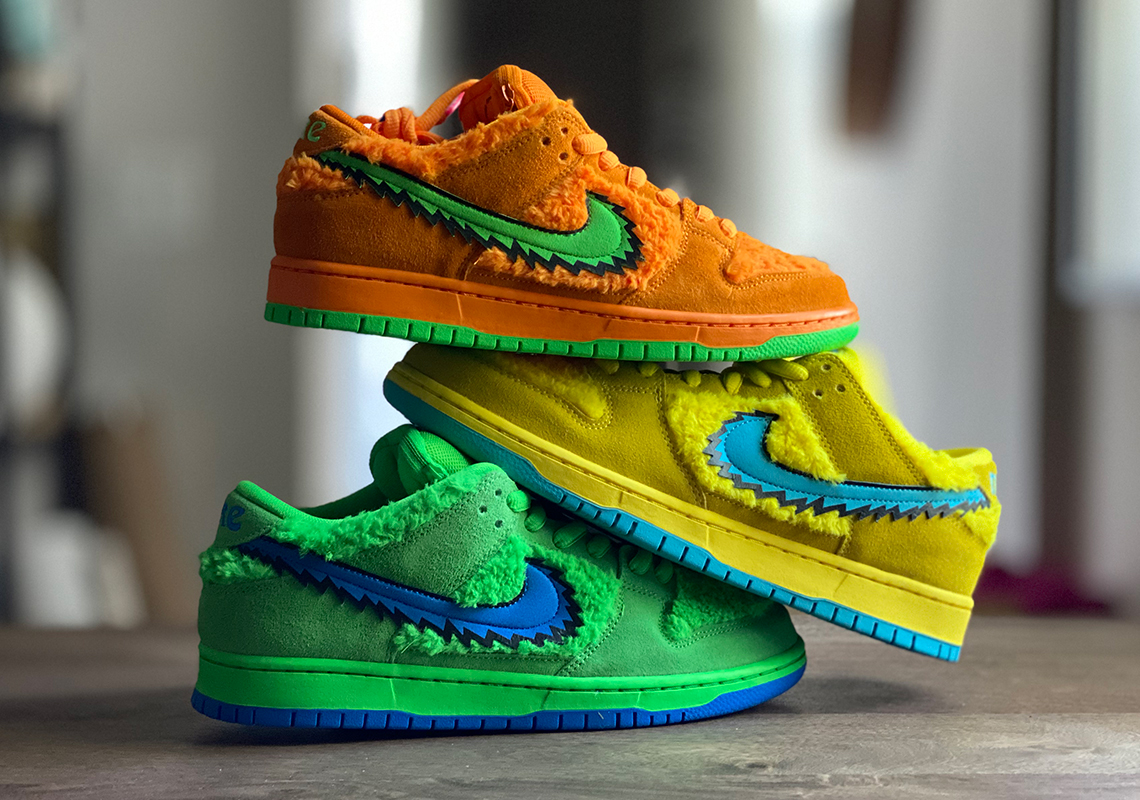 What has separated this particular year from the entire previous history of the SB Dunk is the collaborations. Nike SB has been carefully selecting its partners since 2002, but most have been comprised of skate-shops and artists. This year alone, we’ve seen the fat-tongued modern marvel brought before the eyes of major brand entities such as Ben & Jerry’s, Travis Scott, and even 7-Eleven, solidifying the sneaker as one of the most relevant yet hard-to-attain kicks on the scene. Joining that exclusive group is the Grateful Dead, the NorCal-founded influential rock band that for over half a century has packed arenas. The design is based off the marching bears, whose origin comes from the album artwork of their 1973 LP History of the Grateful Dead, Volume 1 (Bear’s Choice). Those drawn characters were a reference to Owsley Stanley, an audio engineer nicknamed Bear who helped develop the group’s Wall of Sound system as well as the cartoon symbol, among other things. Although there are five bears in the original artwork, just three were transformed into the SB Dunk Low – leaving us to believe that the remaining two will make their appearance somewhere down the line – possibly on a different shoe.

The orange version of the Grateful Dead x Nike SB Dunk Low will release on July 18th exclusively at San Francisco’s FTC; it will not release anywhere else. The yellow and green versions will release on July 24th; the yellow will be available at skate-shops and Nike SNKRS, while the green version will be exclusive to skate-shops. All three pairs will retail for $110 and come in the multi-colored Quickstrike shoe-box.

To celebrate the official announcement of the collaboration, Nike linked us with Bill Walton, perhaps the biggest Dead-head in history, to chat about the shoes. First off, you don’t “interview” Bill. You give him the mic and brace yourself for a verbal acid trip. There really is no question you can ask an individual who lived and continues to live life to the fullest. There’s an infectious passion and spiritual nature behind everything he says. He’s tie-dye in human form.

Without further ado, please check out our interview with the legendary Bill Walton where we discuss the Grateful Dead, these Nike SB Dunks, his relationship with Phil Knight, and more. And if you want to further immerse yourself in Dead history, check out the latest episode of the The Good Ol’ Grateful Deadcast exploring the life and legacy of Owsley Stanley, the pioneer underground LSD chemist as well as trailblazing sound engineer for the Grateful Dead.

Bill Walton: You know John, you got your tie dye sweatshirt on, man. It’s 100 degrees.

John Kim for Sneaker News: I could not miss the opportunity to wear tie dye in front of the great Bill Walton, and the only tie-dye thing I own is a hoodie. I had the AC blasting in my apartment for the last three hours. so I think I’m good.

So I’m Bill and this is John and this is a harmonic convergence of the highest order between Nike and the Grateful Dead. I love companies that epitomize everything that I believe in. Excellent product, incredible human culture, and then authenticity and quality with these phenomenal shoes here. I’ve been a Dead-head since I was 15 years old – that’s 53 years now.

Let’s talk about that for a little bit. Everyone is aware of your fandom of the Grateful Dead, and you might be the biggest deadhead of all time.
I’m just a deadhead and a very proud. I’m here as a volunteer. I’m not on the business side. I’m just a fan and I am a consumer, and I love their stuff.

I’m the same way. I’m a consumer and fan, first and foremost, that’s kind of how my career started.
I love the Grateful Dead and I love Nike and I love my shoes and I love dancing. I’m proud to be a great dancer, although I’ve never had anyone else confirm that. I’ve been to over 1,000 shows. I’ve been going since 1967, so that’s 53 years. And you know I fell in love with the Grateful Dead when I was 15 years old when I first heard them I fell in love. And then I went to my first show when I was in high school and I got right to the front and everybody was so happy and everybody was dancing and most of the people had shoes on. Most of the people had clothes on. And it was just a fantastic experience of peace and love and joy and hope and optimism and and a belief in the community, working together to make the world a better place.

And and I first met Phil Knight in 1974 when I first met moved to Oregon. The Blazers and Phil were just getting started at that time. And so we’ve been friends ever since. And he just, you know, he is one of the most important people in the history of the world. You know, the success of Nike and the story of Shoe Dog and the culture that they have and the position in our world, the position of respect. Appreciate the position of appreciation, the position that we know where Nike stands and their willingness to stand up for things.

Let’s say you attend an upcoming show and you’re wearing a pair of these shoes. What does Bill Walton stash in that tongue pocket?
My car keys, unless I take an Uber or unless I ride my bike. And then I have my hotel key unless I’m staying at home here. Going to the show is like going on the trip of a lifetime. And you do not want to be weighed down with excess baggage. I carry my phone, I carry my chapstick, and I carry by Grateful Dead lucky coin. Don’t ever discount the power of luck. A lot of luck goes into success. And so I will have just the bare necessities, because I want to be able to move. I want to be flexible and I want to be able to go in any direction because one of the great things. One of the endlessly wonderful things about the Grateful Dead is that it’s never too loud. But you also never know where you’re going to end up.

This is the SB Dunk, which was originally a high-top leather basketball shoe from the mid-1980s. What was it like playing four quarters in high-top leather shoes? Must not have been a good feeling.
It’s like everything else when you have greatness. It just keeps getting better and better. At the time it was the best of the best. Yeah, but because of the quality of the people involved. The level of performance of the Grateful Dead today is better than it was. Better technology, better musicians, better experience, better management, better leadership, better everything and you know you can say that about all things that are good. And that’s what we brought together here is we brought together quality authenticity and we’re moving forward. And this is the next evolutionary step on the way to perfection and on the way to the outer edges of the universe, which is still being created, still being explored.

Grateful Dead and skateboarding are two globally popular entities, but they’re commonly associated with West Coast lifestyle. Can you describe that?
This is where it all started. That’s where it all happened. I was a skateboarder, the very early days, I made my own skateboard. The first one I had, I broke down a pair of roller skates that I got from, I don’t know where, the Goodwill or Salvation Army, and had a screwdriver had a wrench and hammer and nails and built it. At the corner of my family home in San Diego here in La Mesa, which is just a contiguous suburb of San Diego, at the corner of the intersection that we lived on was a perfect natural halfpipe. And so when I first started riding my bike when I was five. When I first built my first skateboard, I was probably six or seven,

Just a couple months ago Nike did a collaboration with Ben and Jerry’s, and that company has some connection to the Grateful Dead as well.
Yeah, I know. Ben and Jerry I know those guys and I love the ice cream. With Jerry Garcia, I’m a fan. And I’m a friend. And I love that guy.

There are three Bill Walton identities and pop culture – the basketball legend, the sports commentator, and the Dead-head. Which are the three Do you enjoy being the most?
I don’t separate. I was privileged to be on three of the greatest teams and the history of basketball and that does not even count our high school team or my elementary school. Very good. But UCLA, the Blazers and the Celtics. Those were historic and monumental African teams – teams for the ages. And then as a broadcaster. Who would have ever thought the most unlikely career choice ever? Come on – 6 foot 11, that red hair and big nose, freckles, a goofy looking face and a life-long stutter. I can’t talk at all. And then I’m a Dead-head. Well over 1000 Grateful Dead shows and looking for more. I’m the luckiest guy in the world.

We know that there are five colors of the marching bears, but there’s only three coming out. If you could design the remaining two to complete that whole set, how would you design it?
I am not going to take a stab at that. Right now I am gonna wait until I’m holding the shoes and I’m going to wait until I stand out there in the sunshine, daydreaming, experiencing the wonders of nature. See the colors of the rainbow go across my ever-widening eyes. The thing with the Grateful Dead and Rhino and with Nike – these are the smartest business people in the world. They know what they’re doing. In the early days. I used to care what they play and I used to care where they play. Now I just care that they play at all and how they play, and I know over the course of my 53 years with the Grateful Dead and my 46 years of knowing Phil Knight, and my countless years with Rhino. I know that they’re going to do their job.