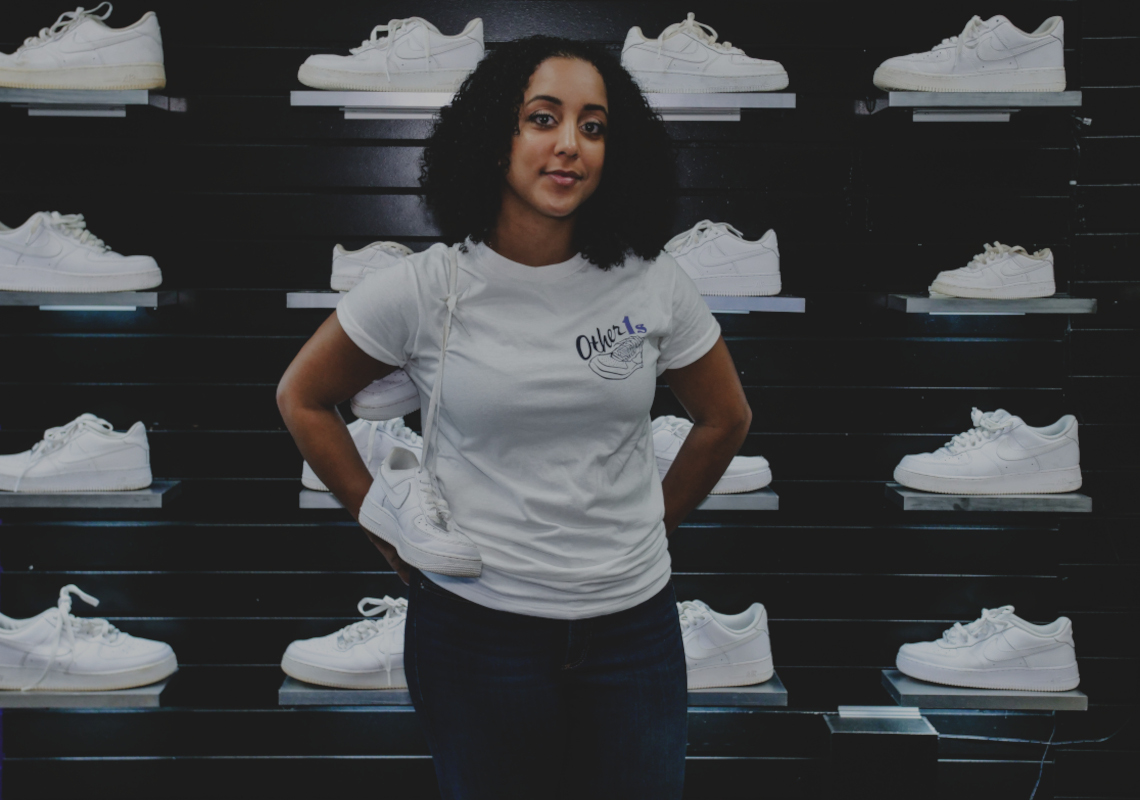 If you surveyed 100 people about “the perfect sneaker,” the odds of receiving multiple “Nike Air Force 1” answers would be high.

Designed by Bruce Kilgore and debuted in 1982, the sneaker has come a long way from its roots as a high-top basketball shoe. Cities like Baltimore and New York gave the Air Force 1 a life beyond the hardwood, infusing a “cool” factor into it that still endures today. And while hundreds of colorways, modifications and collaborations have reimagined Kilgore’s original design, the all-white AF1 – in particular the low-top version – has been widely accepted as the most iconic.

Despite growing up in Boston, which has historically held close ties to adidas footwear, Leah Tavares, founder of Other 1s Foundation, has always viewed the sneaker with certain cachet.

You were fly if you had an all-white pair.

“Whenever you spotted people in Boston wearing Forces, you thought they were in the know,” she said during a conversation through Zoom earlier this month. “You were fly if you had an all-white pair. You can do so much with it.” Tavares’ own back-to-school look often consisted of a side pony tail, plain t-shirt, ripped jeans and pair of “white-on-whites.”

Currently living in the Bronx (with an impending move to Portland, Ore.), Tavares collects old and new pairs of all-white Forces, donating them to those in need. Largely operating as a one-woman team, Tavares’ charitable endeavors are carried out through Other 1s, a foundation she established in October 2020. The Dorchester-native had participated in community service before, but it wasn’t until, in the face of COVID-19, she saw a video posted to Instagram of Dr. Dre’s personal closet that she decided to focus on her latest project.

“I [wondered] how many people [had] this situation,” Tavares said.

No Air Force 1 is off-limits.

The “situation” she referred to is that of owning a new pair of “Uptowns” – as they’re commonly called in New York City – for every day of the year. Yes. 365 (or 366) different pairs of the same sneaker with a lifespan of at most 24 hours. While the approach might seem obnoxious, gluttonous and financially irresponsible, to some, it’s the only acceptable way to wear the Nikes.

Dubbed the “one-and-done,” the habit was brought to mainstream consciousness by influential figures to emerge from NYC’s hip-hop scene between the late 1980s and early 2000s. DJ Clark Kent, Damon Dash, JAY-Z, Fat Joe and Jim Jones have all tied a crisp new pair of white Air Force 1s to being “fresh.” Their high-visibility and success helped validate a “pristine-or-nothing” expectation within the sneaker space, much to Tavares’ delight as it’s meant most of the pairs she’s collected for donation haven’t required too much cleaning.

“No Air Force 1 is off-limits,” she proclaimed when asked about what she accepts.

On July 4th of this year, Tavares traveled to Cape Verde, an island country near the coast of Senegal to which her family traces its roots. Alongside her mother and Liza Goncalves, her former boss at Compound (creative agency and space founded by Yasiin Bey and Set Free Richardson), Tavares worked with Joli Moniz of For Life Inc. and volunteers from the first professional Cape Verdean basketball league to give away 100 pairs of white-on-white AF1s; the three-digit amount took six months to achieve through “Other 1s”-branded donation bins at a handful of stores in Massachusetts and the Bronx; gift cards; and personal connections. (Being the social person she is, Tavares has struck conversations with random people she’s come across, promoting Other 1s and promising pre-paid shipping labels to those down for the cause. This method has secured donations from Atlanta, Chicago and other parts of the United States of America.) Residents of all ages from Santiago Island congregated at Parque 5 de Juhlo in the capital, Praia, to enjoy music and games as they waited for their very own Nike sneaker.

There’s nothing like giving back to your own people.

Tavares when reflecting on her time in Cape Verde

Due to a language barrier and sizing conversions, the hand-off scene, according to Tavares, was something out of Disney’s “Cinderella”: shoes were passed around from attendee to attendee until they found a fit.

“I didn’t expect such young kids,” she shared.

Infant and toddler sizes, which were stuffed inside adult pairs across the seven suitcases with which Tavares traveled to Cape Verde, ran out almost immediately. Quick on her feet, the 28-year-old wrote down many kids’ information with intentions of following-up with them. Larger sizes that didn’t find a home at the July 4th event ultimately did so at Tendas El-Shaddai, a men’s substance abuse recovery center in Santa Cruz.

“I think about my Cape Verde [trip] every day,” Tavares said. “There’s nothing like giving back to your own people…[boosting] kids’ confidence.”

I want people to think about other people; I just did it through Air Forces.

Tavares on what it all boils down to

For her next visit, the Cape Verdean-American would love to visit individual neighborhoods across the country’s 10 islands, as she believes dozens of people shied away from attending her event in July over shame, timing constraints and financial hurdles.

“If you can’t afford things, it’s unlikely you go out for help,” Tavares expressed.

To celebrate Other 1s’ first anniversary, Tavares plans to donate current stock to organizations and centers in the greater Boston area by the end of October. Donation bins are currently set up at Sneak Boston in Roxbury, Banks & Broncos in Brockton and Laa Tiendaa in Malden. The Private Shop in White Plains, N.Y. is the latest locale accepting donations. Ultimately, Tavares would love to establish bins in more shops across the country, working with like-minded locals to manage them. She also aspires to develop networks in Haiti and the Dominican Republic, two countries with large diasporas in Boston.

A big proponent of speaking things into existence, the Other 1s-founder would love to work with retailers and the likes of Dr. Dre on establishing a stable funnel of donations. And if these partnerships could be announced at a Nelly-headlining concert in St. Louis, that would be all the better.

“I want people to think about other people; I just did it through Air Forces.”


To stay up-to-date with Other 1s Foundation, follow it on Instagram via @other.1s. To participate in the organization’s efforts, visit the “Donate” section of other1sfoundation.org.